Blake’s birthday celebration was kicked off with his party at school. I came in with donuts and taught his class yoga (per Blake’s request). I love that he is at the age where having a parent come into your class in the best thing on the planet.

After school, we voyaged to an indoor playland that has carnival rides.

Blake was almost in tears because he was so scared to go on the roller coaster (after talking about it for days), but I buckled him in and convinced him do it anyway. He had a permanent smile on his face the entire time. And afterwards, he exclaimed, “That was the best ride ever!”

He was thrilled that everyone recognized him as the birthday boy. He didn’t realize that his crown from school was a dead giveaway. Which coordinated with the rainbow theme, I might add.

Back at home, we prepped for more celebrating.

We invited some of his friends over (that are also our friends) to participate in balloon darts.

I think we set a record this year for how fast those things were popped and candy was swept up.

Blake’s rainbow cake was everything he dreamed of. And his birthday was too. He literally cried (for an hour) when he went to bed that night because he was devastated his birthday was over. That might be the one and only upside of a December birthday; Christmas is right around the corner. 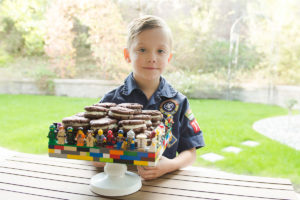