When school got out in May, I was really worried about how we were going to fill our endless summer days.

Now, I’m looking forward to school starting again just so things can settle down a bit.

Don’t get me wrong, we’ve been having a blast, it just seems like we have been going nonstop. I can hardly catch my breath – let alone get to posting about Crew’s blessing and all of the other events that have made our summer memorable.

Sometimes I think, when I’m old and gray, I might want to remember the details of my life when I was young and carefree (ha ha) with little ones always clinging to my legs. The last four days in particular have been a whirlwind of one event to the next:

Wednesday – I cleaned my house like a mad woman to get ready for the next round of company. We haven’t gone more than a few days the last six weeks without someone staying with us. We sure love all the visitors, even if means washing the sheets and towels and remaking the guest bed over and over. This time, it was my cute teenage cousins from Michigan. I started making dinner preparations at 3pm in the afternoon to make sure everything ran smoothly.

Just when I was feeling on top of the world as far as preparedness went, the dinner completely burned when I went to reheat it a few hours later. Two extra minutes on the stove and it wasn’t even redeemable. I scrambled to make it all over again in the short time span I had before the boys’ Tball game, which included sending Troy to the store for an ingredient I used up the first time. Talk about a frazzled, maddening half hour that resulted in us not eating until after the game at 8pm when everyone was hot and starving. 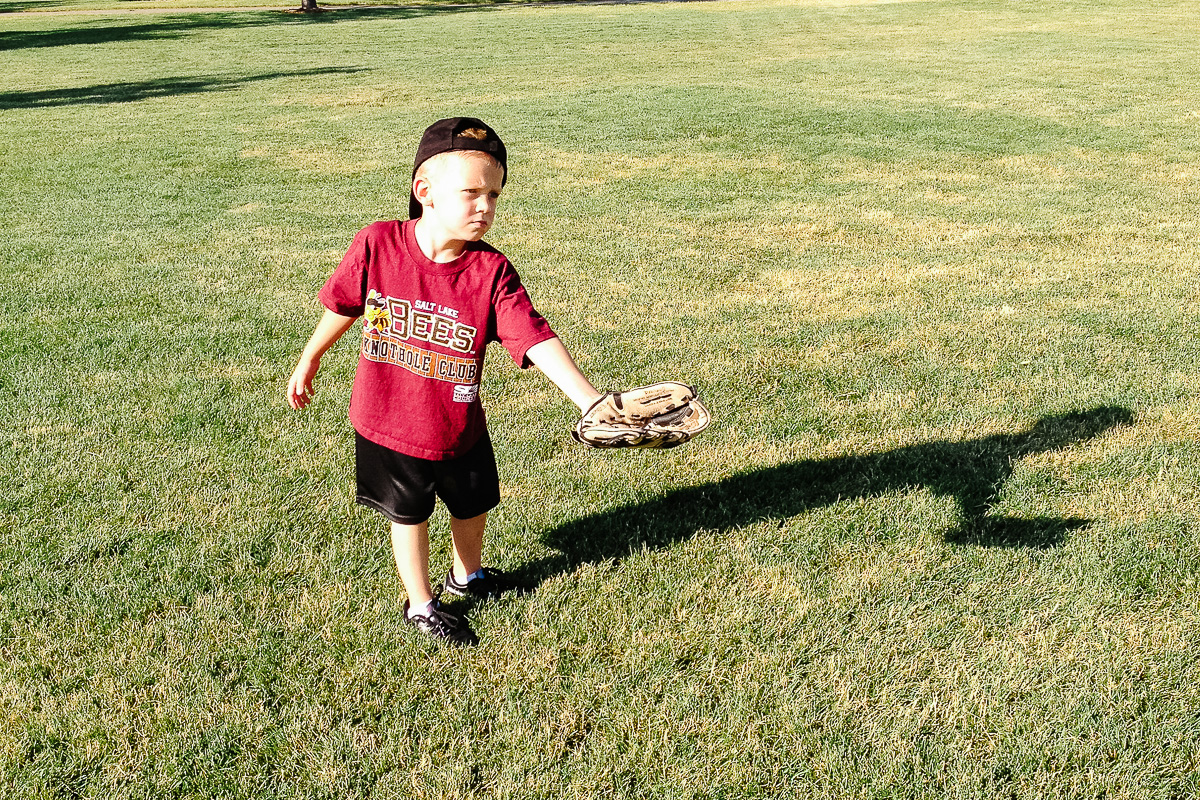 Thursday – I spent most of the night and early morning hovered over the porcelain bowl and sleeping in intervals on the bathroom floor. I was the only one in my family (thankfully) to catch a violent stomach bug. It’s a good thing I’m used to being pregnant and having to power through events even on the verge of keeling over. I didn’t want my cousins to have a lame time while they were visiting us, so out we went.

We started out at our weekly movie theater flick where Nash and his friend Bella decided it would be a good idea to perform Kung Fu fighting up and down the aisles (the movie was Kung Fu Panda and it did not hold their attention). Then we headed to the waterpark and battled the crowds and the heat for a few hours. I took a short nap with Crew back at home and even though I still felt awful, I headed out to book club because I had already committed to being there and I hated to miss out. After a quality girls’ night out, I came home earlier than normal to recoup (yeah right) and spend time with my cousins (who were watching The Host with Troy – yeah I think he’s glad I came home…). 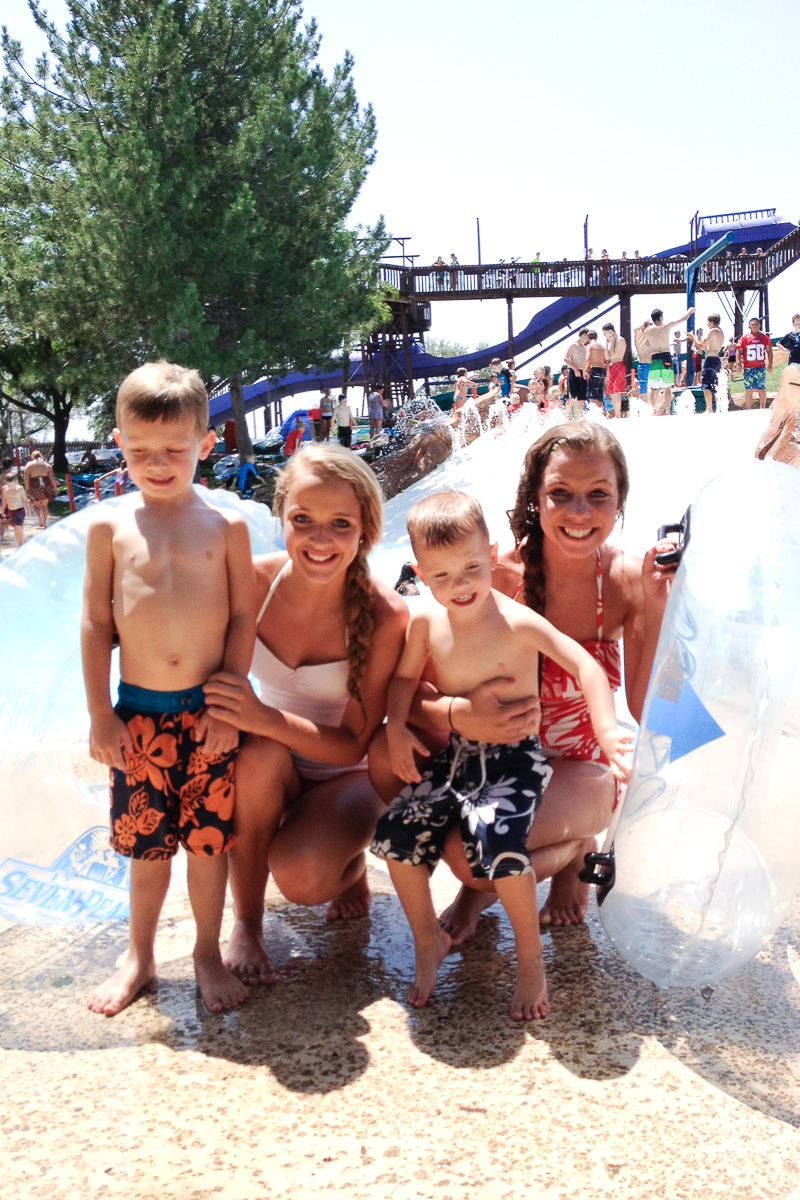 Friday – After another rough night, I repacked everyone bright and early for another eventful day. We dropped my cousins off on the other side of town and Blake bawled for a good half hour because he was afraid he would forget them. We loved having them around and wish we could see them more often.

We then drove an hour south to my friend Kristen’s house and immediately hit the pool. After a few more hours in the sun, I forced Nash to get a nap in since he was at his breaking point (and I was too). 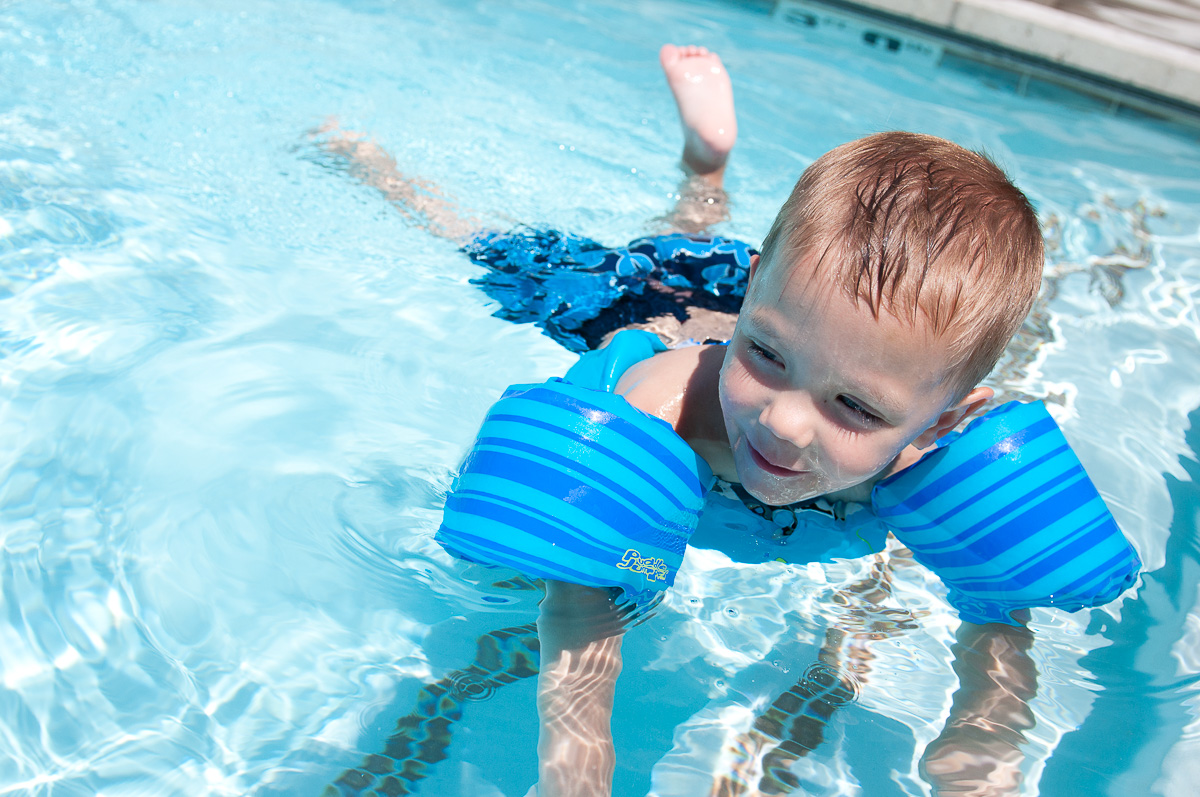 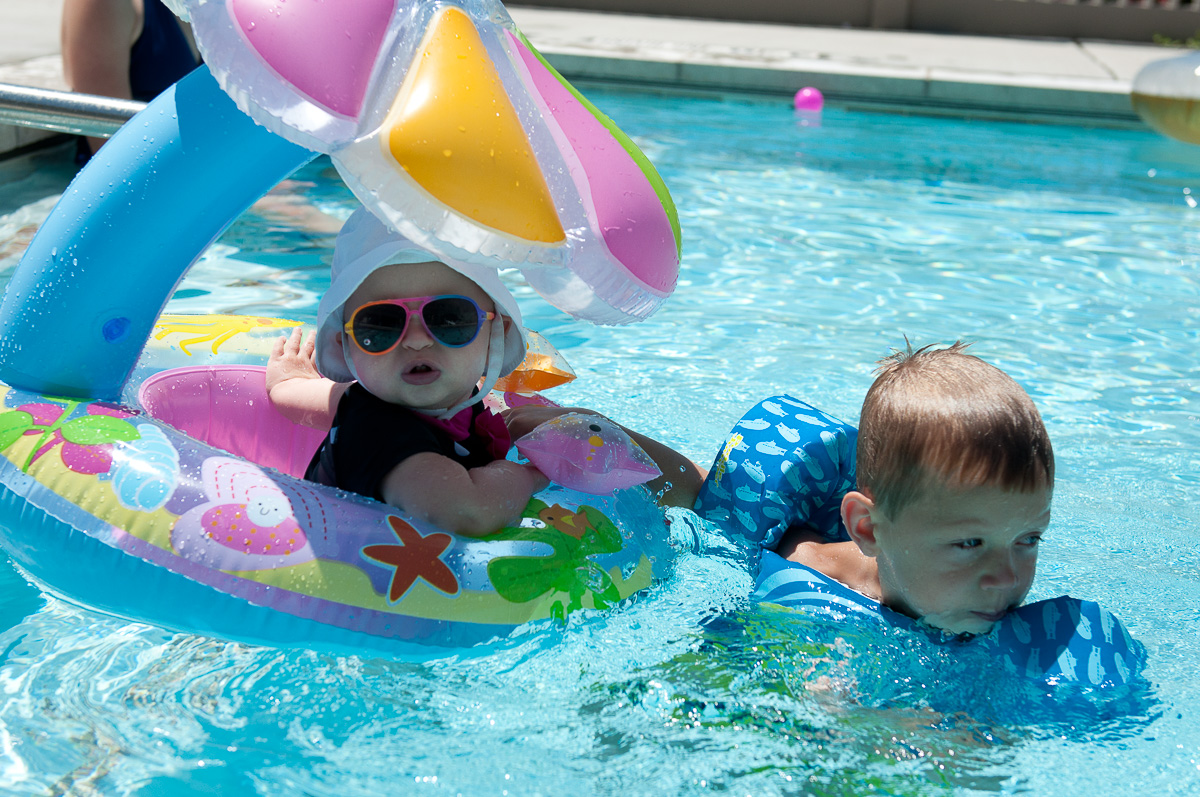 Troy met up with our friends after work and they all drove down to meet us for dinner and “The Sound of Music” at an outdoor theater. Nash kept calling the nuns “nuts” and Blake lit up when they sang “Do Re Mi” because he knew all the words. 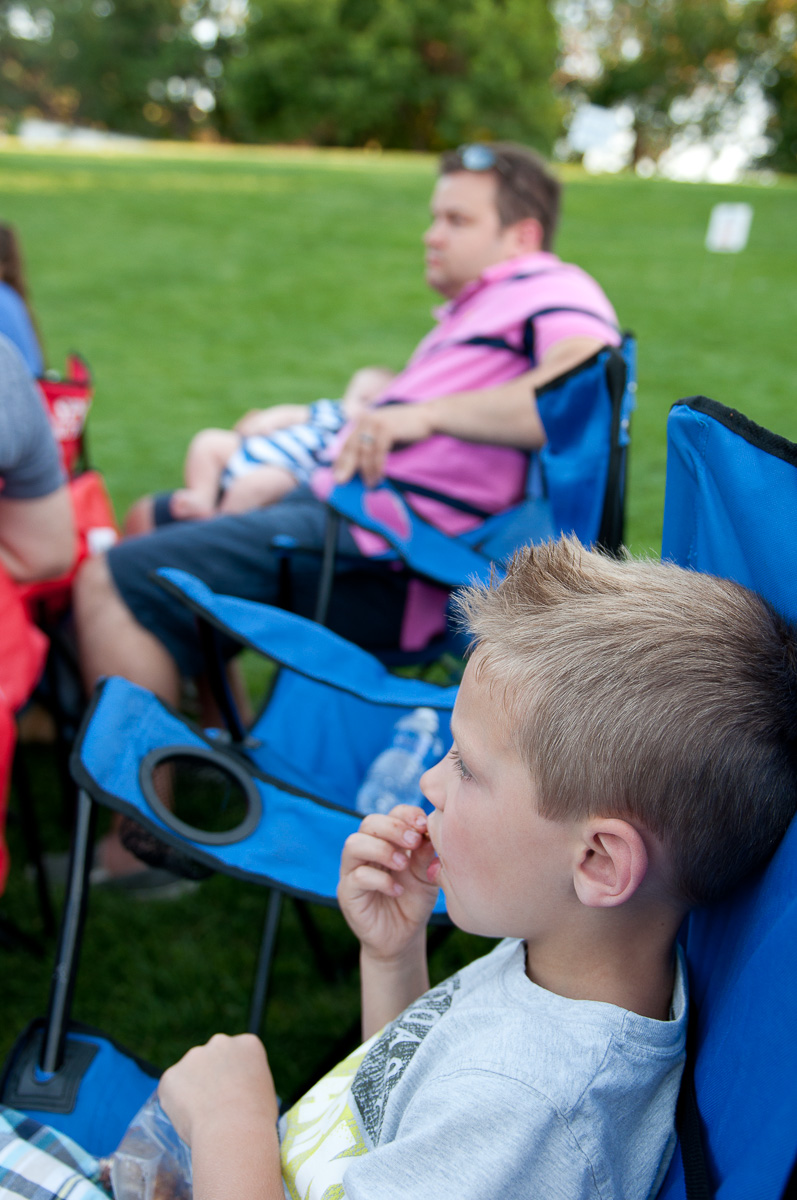 We didn’t make it home till close to midnight. For boys that usually go to bed at 8pm, let’s just say that we were all in hysterics on the drive home. The boys were crying hysterically at completely irrational things, and Troy and I were laughing hysterically because they were so out of control that we couldn’t even reason with them.

Saturday – I woke up finally feeling better, but I didn’t have a second to notice because it was time to unpack from the day before and repack for the day ahead. We kicked off the morning with our annual neighborhood breakfast and carnival, complete with bounce houses, cotton candy, rocket launching and sno cones.

We hopped from that tiring event right to the next one; a work party at the cabin. We hosted 20+ people from Troy’s office for a BBQ lunch. We spent the afternoon eating, chatting, playing ping pong and bean bag toss, and trying to keep the under 5 five crowd from disturbing the over 20 crowd.

We invited a family from work to go boating after the party ended. It went later than expected, but none of us wanted to let the idea go. So, we quickly changed our collective five children and loaded up all the gear. By the time we got the boat launched, we only had about a half hour on the water before our friends had to take off for a wedding reception. We barely got the surfboard out when it was time to pull in the boat and cover it all up again. 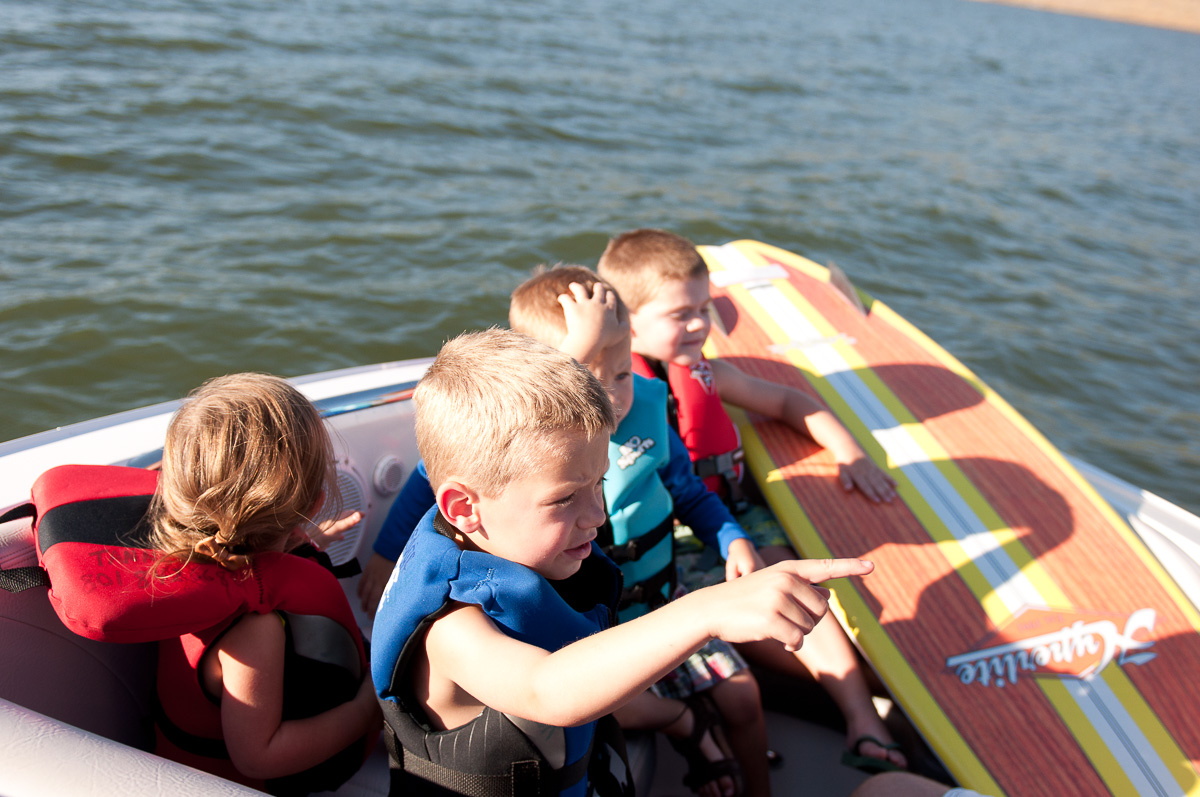 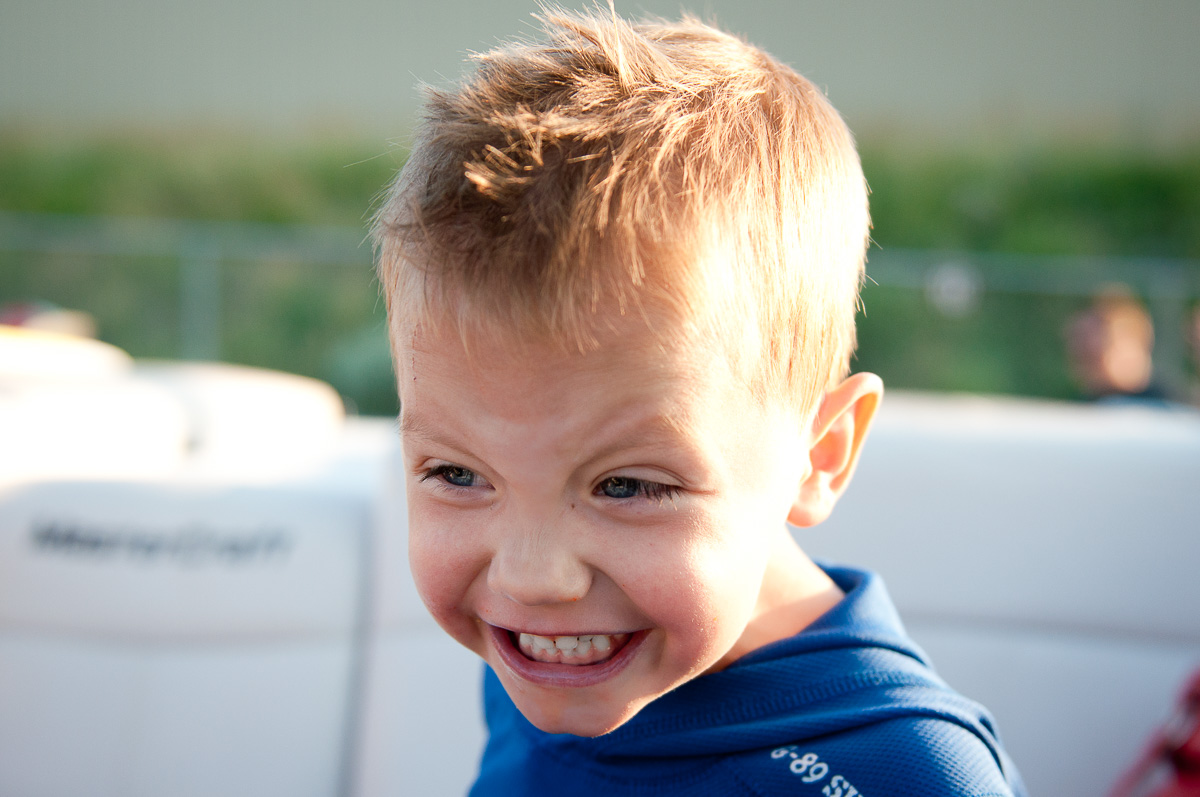 We quickly cleaned up the cabin and rushed back home to meet up with our good friends for a birthday celebration. We missed the dinner and movie portion of the night because of our other commitments, but we wanted to make sure our friend knew he was a priority too. We called several places to hunt down a Key Lime pie (his favorite) to top off the night.

While we were enroute, our friends’ movie got out earlier than we thought it would and they beat us to our house. We told them to go on in, and of course at that point Troy missed the exit that he takes every single day, delaying us even more. We eventually made it home to join them, with non-napped kids asleep in the backseat again.

It wasn’t until that point that I realized we had overcommitted ourselves just a tad. It’s hard when you want to do it all.

Add in six feedings a day, sibling rivalry to no end, temperatures over 100° everyday, endless loads of washing swimsuits and towels, and trying to get design orders completed in any spare minutes I had – and I was utterly exhausted. And I didn’t plan on this being a novel, so if you’ve made it this far, I’m exhausted for you too.

My dad has said “having fun is hard work” my entire life. I think I’m beginning to understand that sentiment. Nonstop fun takes a ton of work behind the scenes and even though it’s worth it, I wouldn’t mind a little breather.

All I can say is it’s a good thing that last week was the week Crew started consistently sleeping through the night.