A few weeks ago, our kitchen sink faucet snapped off, out of nowhere. It left us a constant stream of running water, which needed to be taken care of pronto. We instantly made a trip to the hardware store and discovered that it didn’t cost much more to get a sink+faucet combo than a faucet by itself. Replacing the sink wasn’t our highest priority, but it had definitely been on our home renovation list, so we decided to go for it.

Troy got to work that evening with the sink replacement. He had the whole plumbing process under control and got everything disconnected with ease. He slid underneath the sink to figure out how it was going to lift up, but in the process, the old 100+ pound porcelain sink came crashing down with no warning. It missed Troy’s skull by less than an inch. What it did not miss was the drainage pipe. The impact cracked the pipe in half and yanked it out of the wall.

That left us no choice but to call a plumber. And once the plumber fit us into his schedule a few days later, he had to cut into the wall and rebuild the whole piping system. But, in the end, we had a new kitchen sink. Despite the added cost and the hassle of washing our dishes in the bathroom sink for a few days, we counted our blessings that Troy didn’t end up in the hospital with a very serious injury. 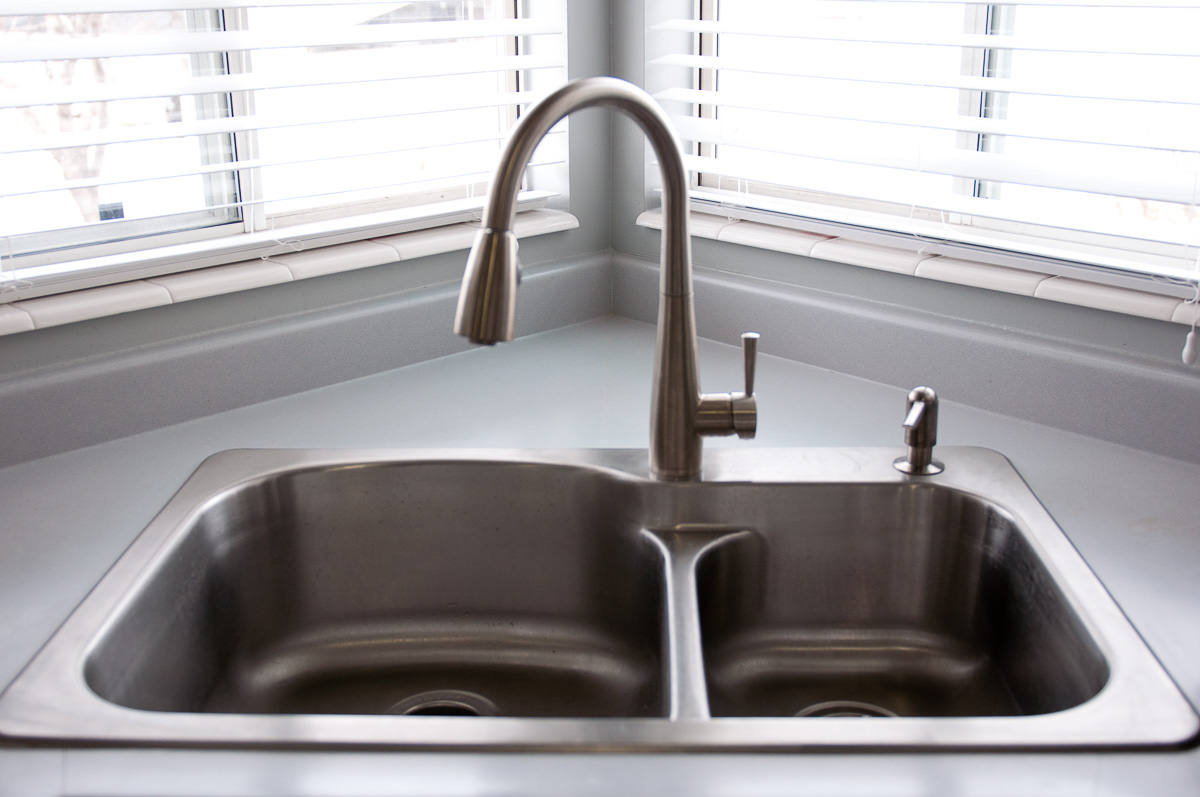 Last week kicked off with half of us being diagnosed with strep, which meant visits to doctors and antibiotics and missed school. Normal dead-of-winter challenges.

And then, in one instant, the challenges vastly intensified.

Troy played a late night church basketball game on Thursday night. In the last six seconds of the game, his team was down by 12 so nothing mattered at that point. But he had a breakaway and went up for a layup. He was hit from behind and landed flat footed, his knee bending inward.

He was in an excruciating amount of pain but tried to brush it off as a sprain. He drove himself home (I still don’t know how) and planned on going to work the next day. But the pain got increasingly worse throughout the night, and by morning, we knew it was time to head straight to the ER.

Thankfully, there was no school on Friday, so we called the sitter we had lined up for our Valentine’s Day date that evening and asked if she could come during the day. She rushed over to watch the boys (who were crushed that we could no longer make our traditional jello hearts) and we took off for the hospital. 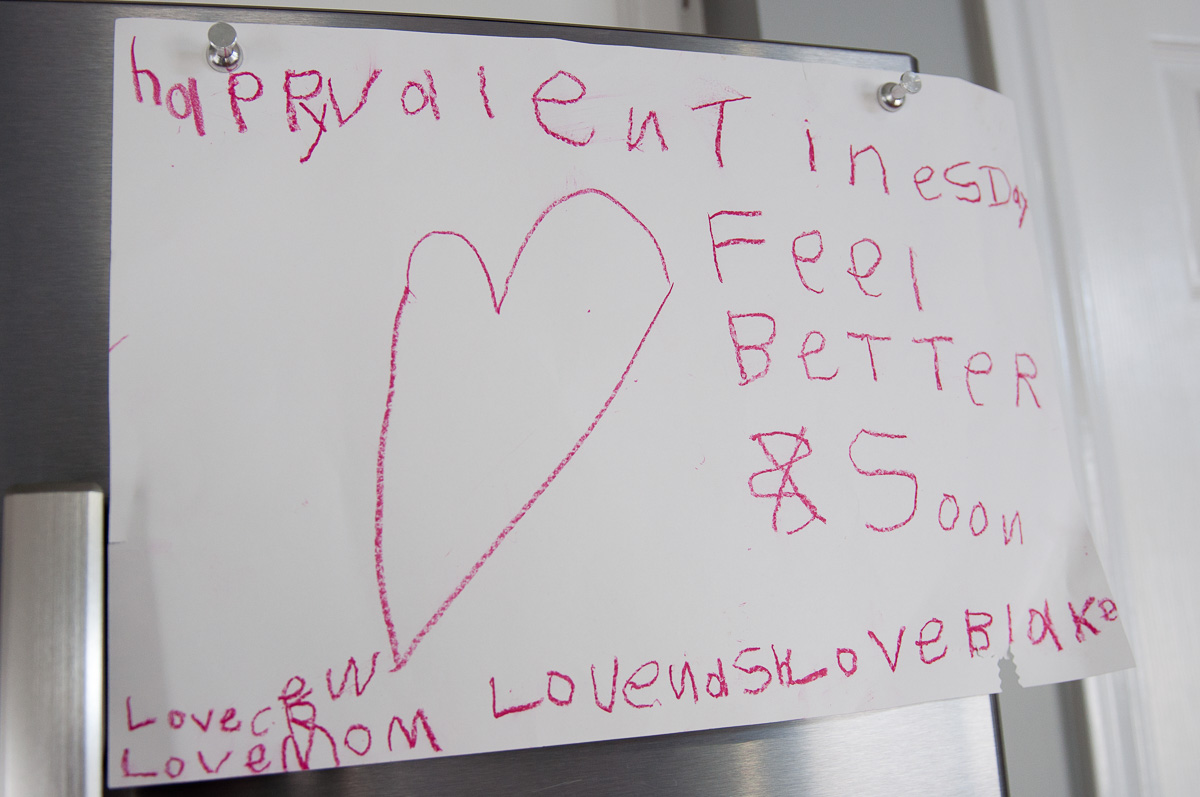 We spent six hours in the ER in what can only be described as a prison cell. We were placed in one of the rooms they save for “difficult patients;” no windows, locked cabinets, plastic chairs, used bedding, and strap tie downs bolted to the floor. I can’t think of a more romantic way to spend Valentine’s Day. We actually got quite a kick out of it. 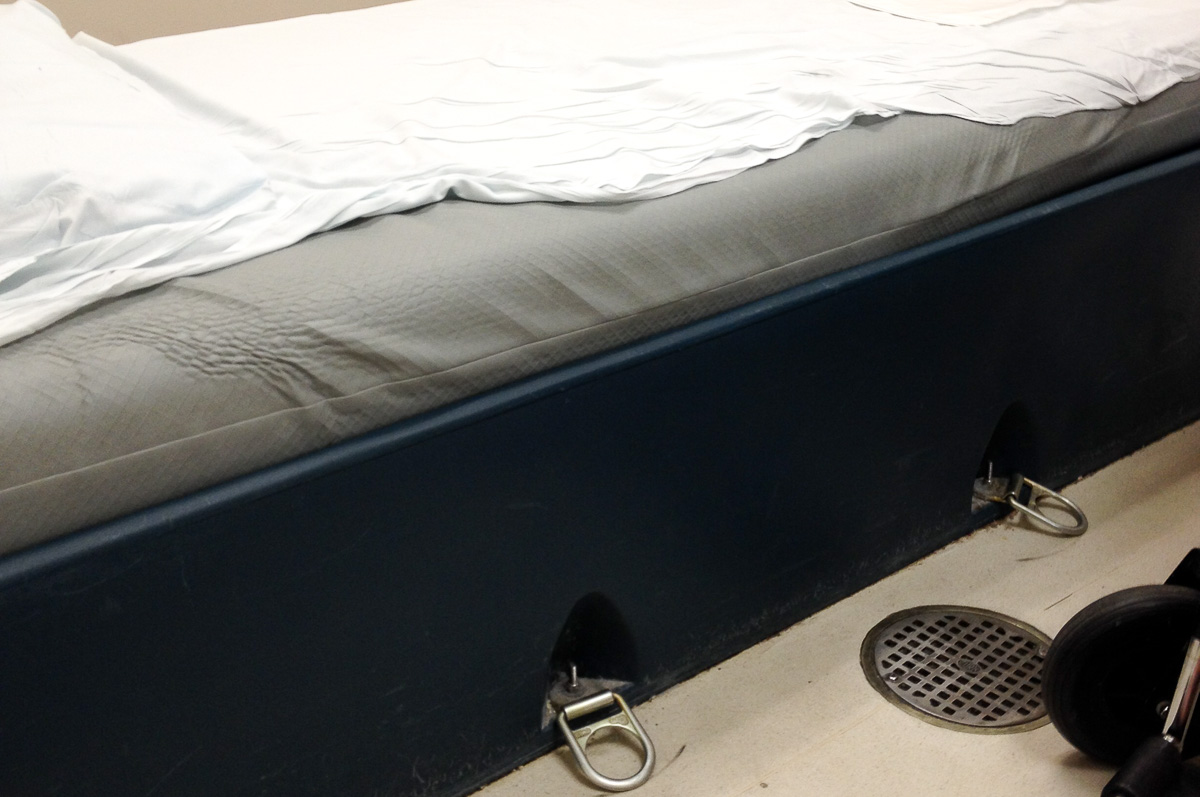 Troy was diagnosed with a fractured tibial plateau. When he landed flat-footed, his upper bone crushed his lower bone. The break was just below his knee with a lot of cartilage damage as well. 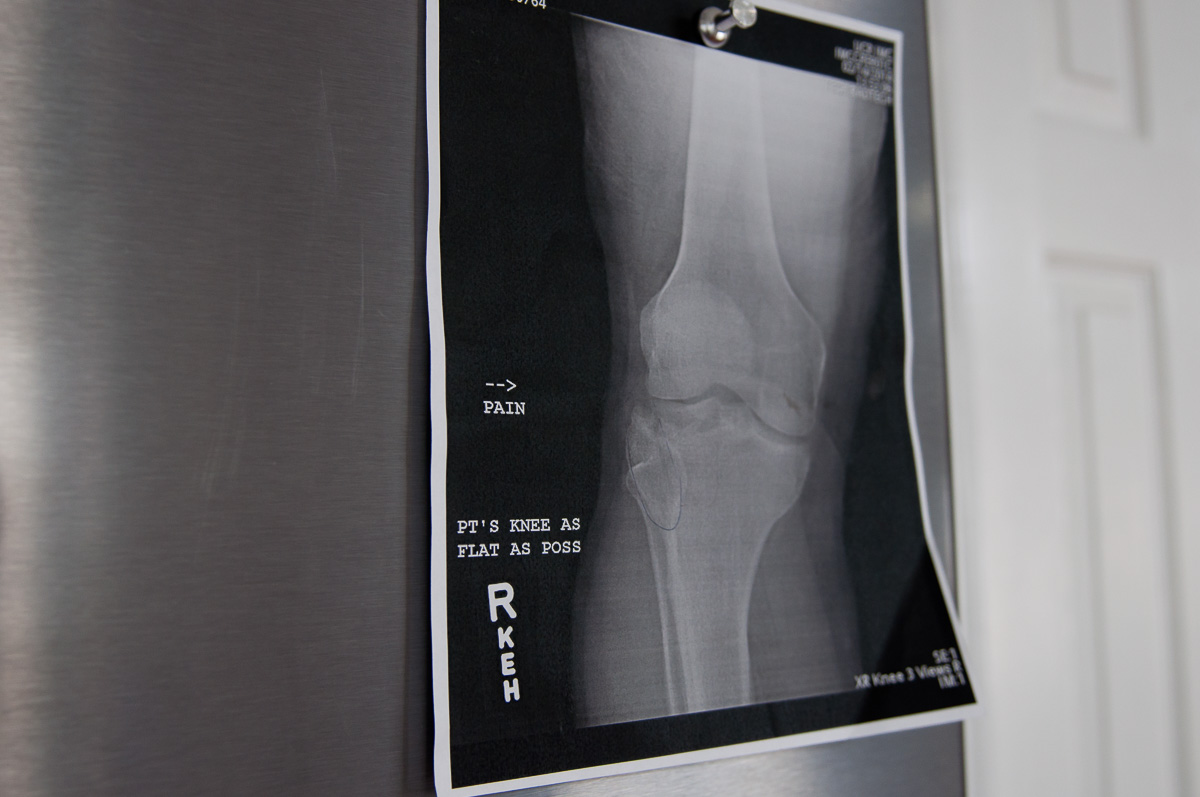 After waiting all day to talk to the Orthopedic Surgeon, we finally learned that surgery would be necessary unless Troy wanted to have a permanent limp or arthritis. It was too late in the day for immediate surgery, and since it was a holiday weekend, the surgery was scheduled for first thing Tuesday morning. 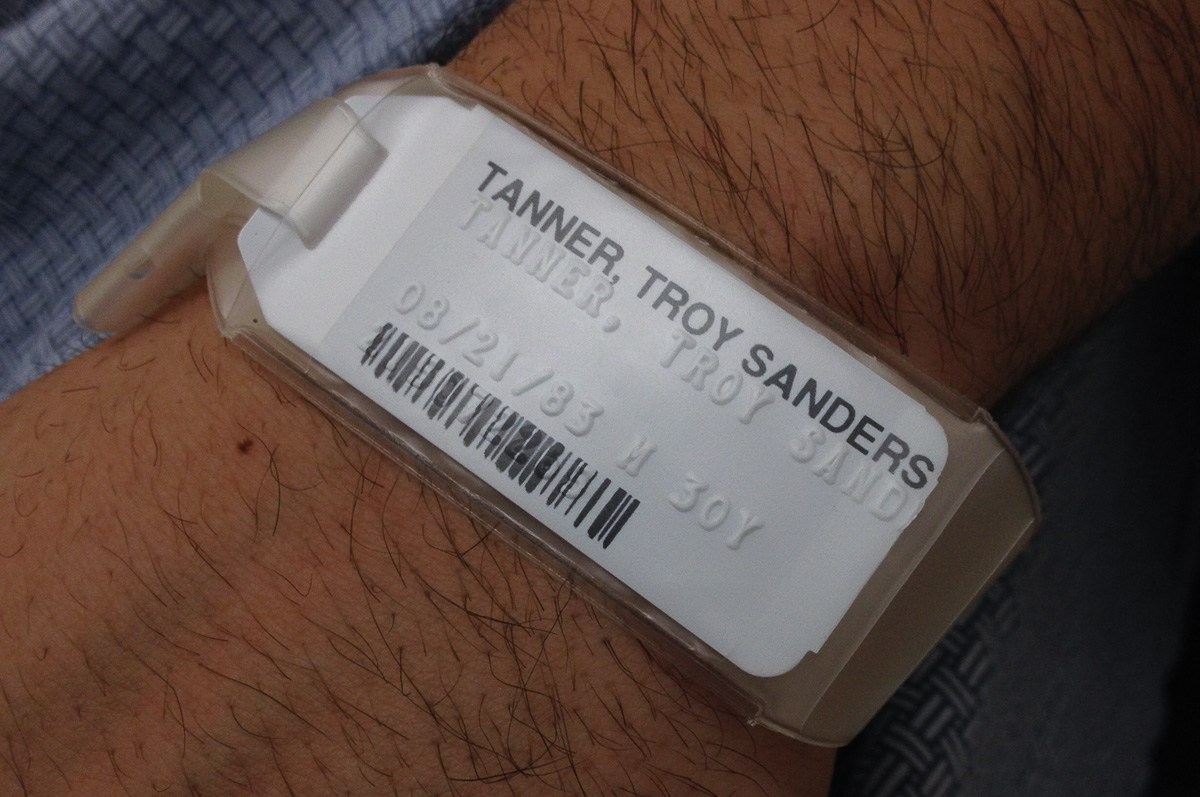 I was getting really anxious about the boys back home at that point. The sitter had been there all day and I didn’t leave anything out for dinner and I needed to feed Crew. I left Troy at the hospital to get his CT scan while I rushed home to feed the boys dinner and get them ready for bed. I had about a 45 minute window to accomplish those things and load everyone in the car twice to bring the sitter home for a break and pick her back up again.We had reservations with friends for dinner that night and despite everything, we didn’t want to back out. It was Valentine’s Day after all and Troy still had to eat, injury or not. We swung by the ER and picked him up on the way to dinner. He hobbled into the nice restaurant on crutches, drugged on pain meds and still in his sweatpants. It doesn’t get much classier than that.

It wasn’t until late that night, after finally bringing our kind sitter back home and driving to a faraway 24-hour pharmacy to pick up Troy’s meds, that I came to a full realization about what the next 2.5 months would entail. I had a little pity party/meltdown when it occurred to me that not only was I losing any help I ever got around the house or with the boys, but I was also gaining an additional person to take care of. Four boys all of a sudden seemed like so many people to be responsible for, and the weight was completely on my shoulders.

I’m not going to lie – this last week has been a serious trial. Our six year old is now more capable than Troy. He can actually carry the baby, dress himself, make a simple meal, get his own drink and fetch items around the house.

Mealtime is a joke. I run around the table serving everyone, continuously cutting up tiny pieces of food for Crew and giving seconds and drink refills to everyone else. I usually don’t eat until everyone else has left the table. And for some reason, the massive kitchen clean-ups three times a day are killing me. I can’t even leave the floor unswept because Crew will crawl around and shove every last morsel of food into his mouth.

And then there’s bedtime. Troy used to help with the older boys while I fed Crew. Now it’s all on me, and once I get everyone down, I want to crash myself. It’s a daunting feeling to wake up every morning knowing I have to do it all over again.

But this is all far from being about me, challenging or not. I’m sure that I’ll adjust to the new set of responsibilities and thankfully it’s only temporary.

Troy has been in so much pain and has to deal with the added pressure of feeling helpless and wondering how in the world he’s going to get back to work. He broke his right leg, so even if he feels up to working in a few weeks, he won’t be able to drive himself unless he learns to drive with his left foot.

His surgery went well. The surgeon made an eight inch incision into his leg and added a plate and 5 screws. The surgery took three hours and they kept him overnight in the hospital to recover. 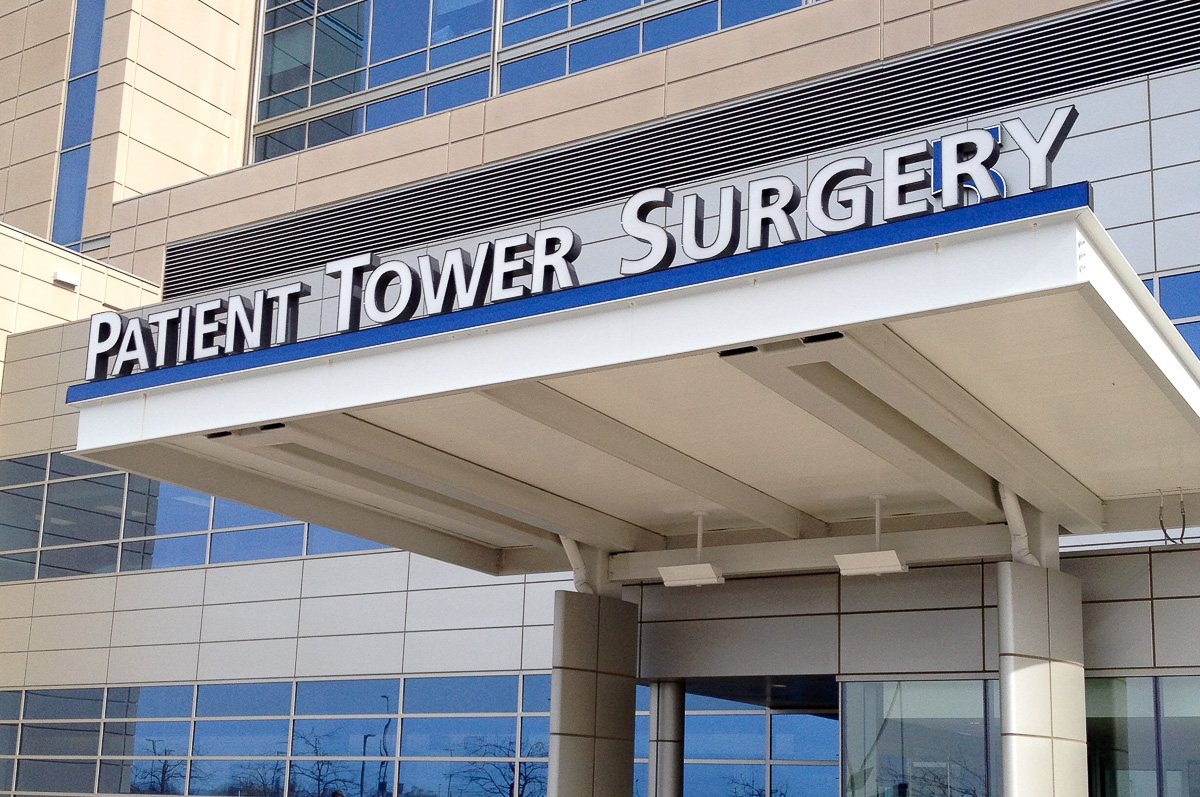 He doesn’t have to wear a hard cast which is nice (although Blake is devastated that there is no cast to sign) and he’ll get a bendable brace in about two weeks. And then he’ll spend two months on crutches or in a wheelchair. After two months, he’ll be able to put some weight on his leg again and begin physical therapy. 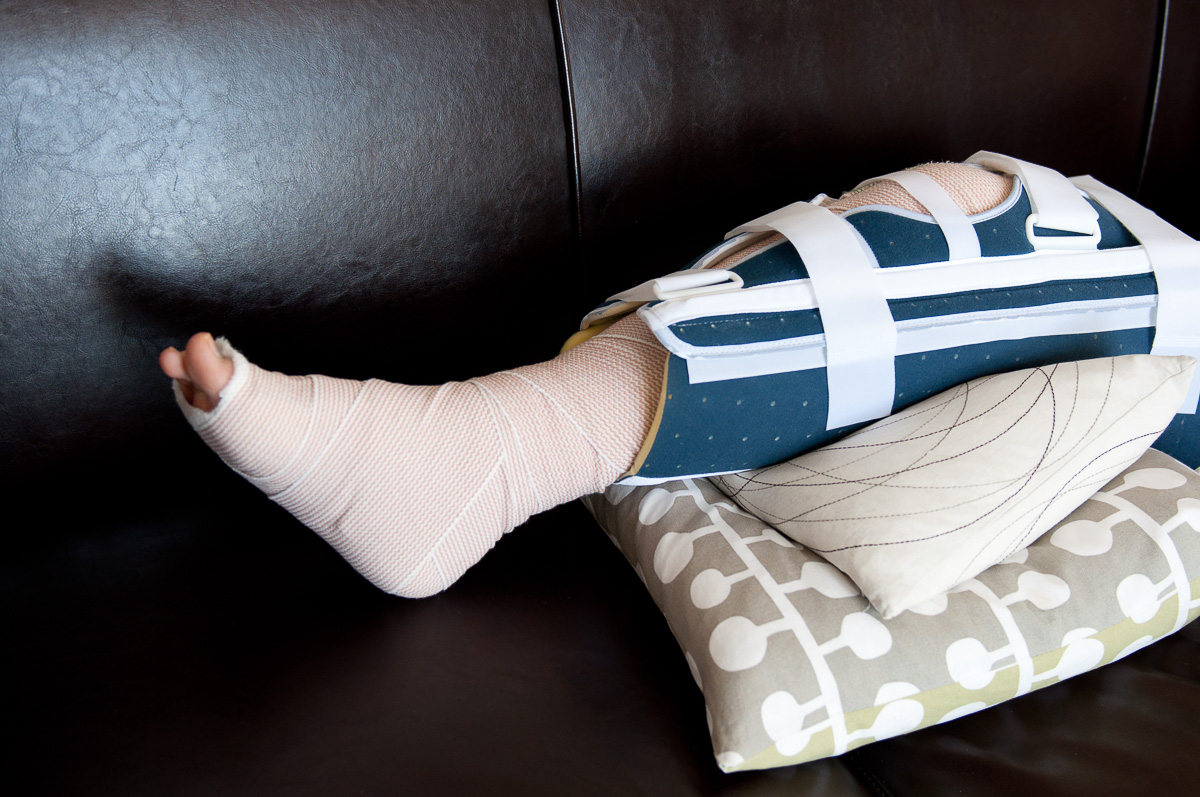 Keeping the boys away from Troy’s injury is proving to be difficult. And keeping them away from his wheelchair is even more challenging. Within the first few hours of being home from the hospital, they successfully put a hole through our living room wall with the new set of wheels. Hence the sign. 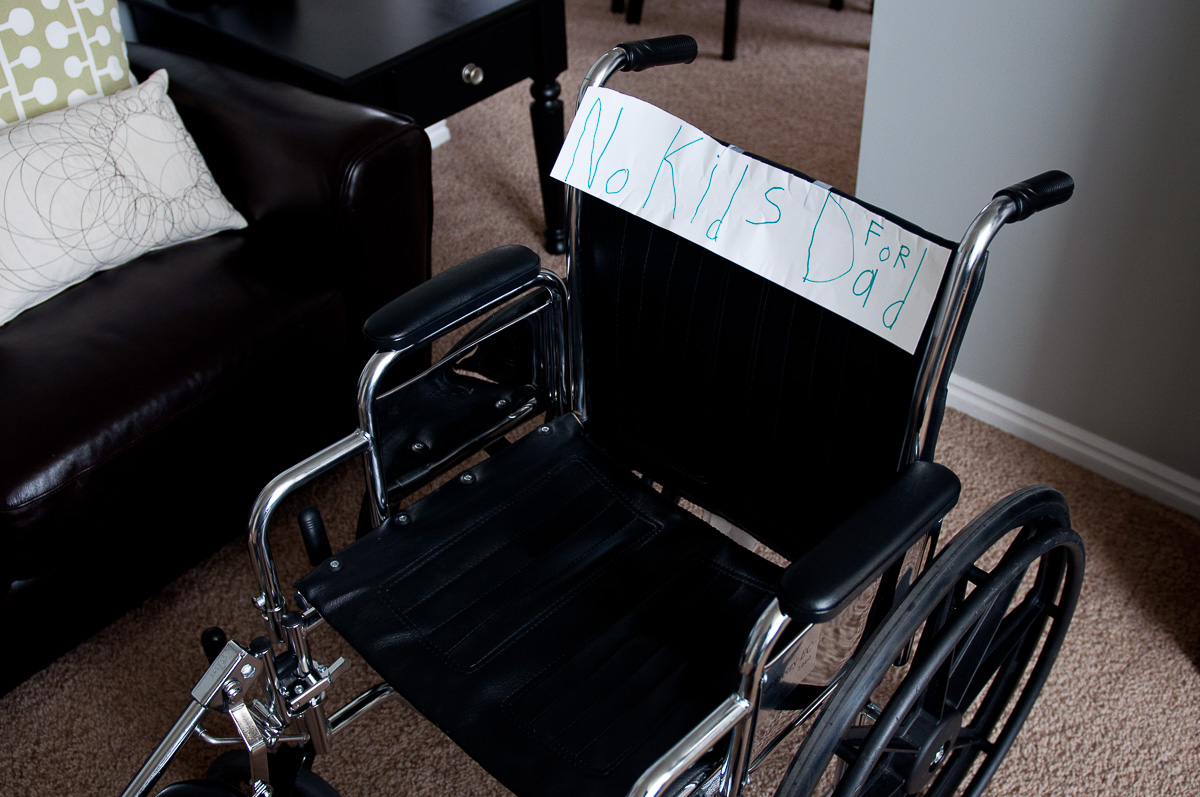 We have been overwhelmed with the outpouring of love, support and concern that has been shown to us. Meals and treats have been brought, countless prayers have been offered, concerned calls and texts have been made and visitors have stopped by on a regular basis.

Except for a few siblings that live an hour away, we don’t have any nearby family to help us out. Our friends and neighbors have stepped right in and become that family for us. Several different friends watched the boys for long hours while I went back and forth to the hospital for two days. Troy’s brother took the older boys out to dinner to give us a break and brought Troy to the hospital at 5:30am on surgery day. Parents from school helped with getting Blake transported after Kindergarten. Visitors came bearing gifts for Troy and gifts for the boys. Not a day has gone by that we haven’t been asked from several people, both close friends and mere acquaintances, what they can do to help.

It is sometimes hard for us to accept help but we couldn’t have survived this last week without so much support. My mom was already planning a trip here next week because Troy was supposed to be in New York for a business trip (which is obviously no longer happening), and I am so looking forward to the extra set of hands and, quite frankly, extra moral support. I don’t think I’m going to let her leave!