I officially reached the “nesting” point in my pregnancy. As per tradition, once I made it a few weeks past the midway point and finally felt human again, I tackled a few massive projects with my newfound energy.

I have done this with every pregnancy. When the sickness subsided with Crew, I burlap-ified our Christmas decorations and prepped our basement for a major addition. I built a headboard, a play kitchen and revamped all of the bedrooms when I was pregnant with Nash. And with Blake, I went gung ho on the nursery while teaching full-time.

I knew exactly what to take on with this pregnancy. The dated orange oak handrails that I have detested for years.

I have held off on updating them because each year we’ve thought we might move. But since our three year home has turned into our six year and beyond home, I decided enough was enough.

I saved up my meager design income to have the handrails replaced. But then Christmas, Troy’s broken leg, and a surprise pregnancy happened and there were extra bills to be paid. So, I started saving again. I was all ready to hire out the job when I realized the quotes carpenters were giving us didn’t even include the paint.We decided we’d rather go to New York and Michigan this summer than spend a fortune on replacing the handrails, so I decided to take on the project myself.

Instead of having them completely ripped out and replaced, I resorted to plan B. 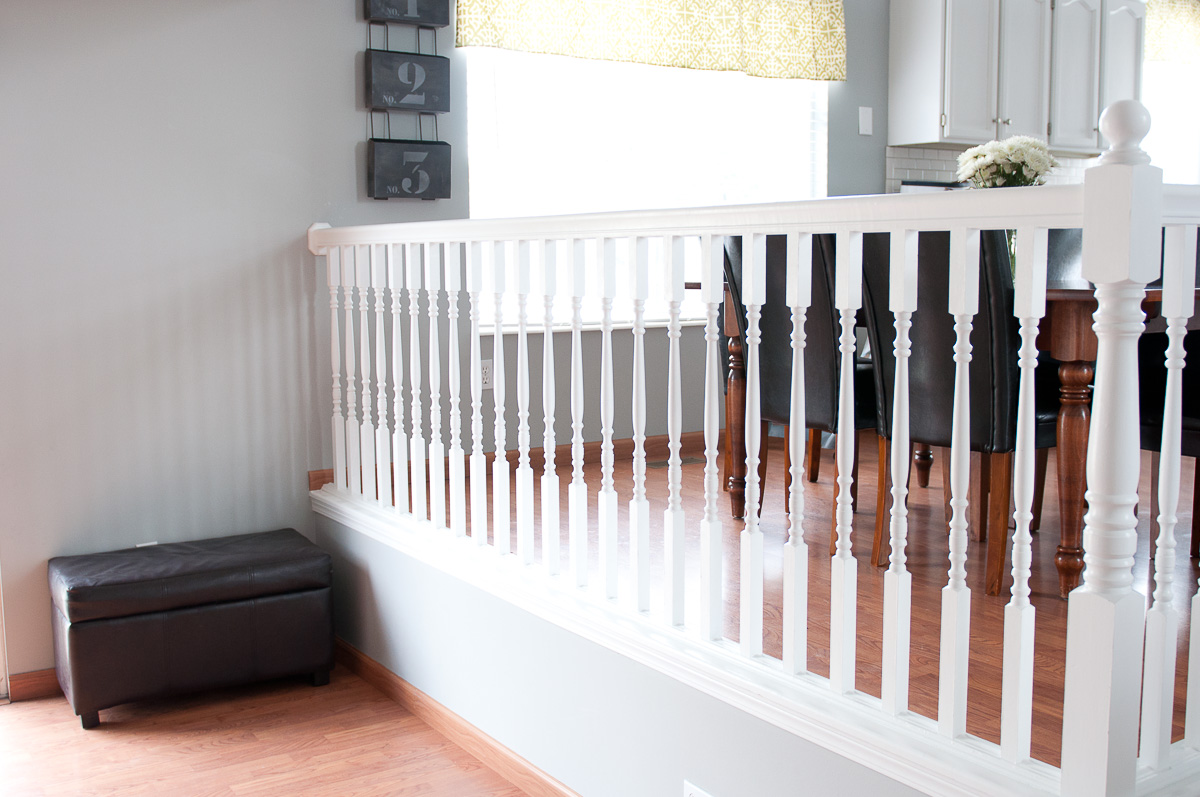 Let’s look at what the handrails looked like when we moved in. 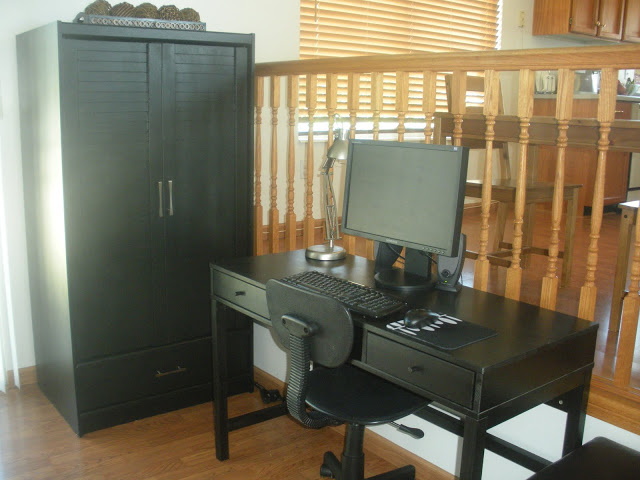 It was definitely time to say goodbye.

I had no idea what I was getting myself into when I began this project.

I mean, how hard could it be to add some paint to each spindle?

It took over a week to add two coats of primer and two coats of paint. Having young children around made it more challenging, of course, so I took advantage of every single one of Crew’s naps and the bedtime hour. It also happened to be the last week of school which was probably the worst timing for such a massive undertaking.

But one morning I woke up and decided I couldn’t stand that orange oak one more day, and once I get an idea in my head, you can’t stop me.

It was completely worth it. I smile every time I see the finished product. 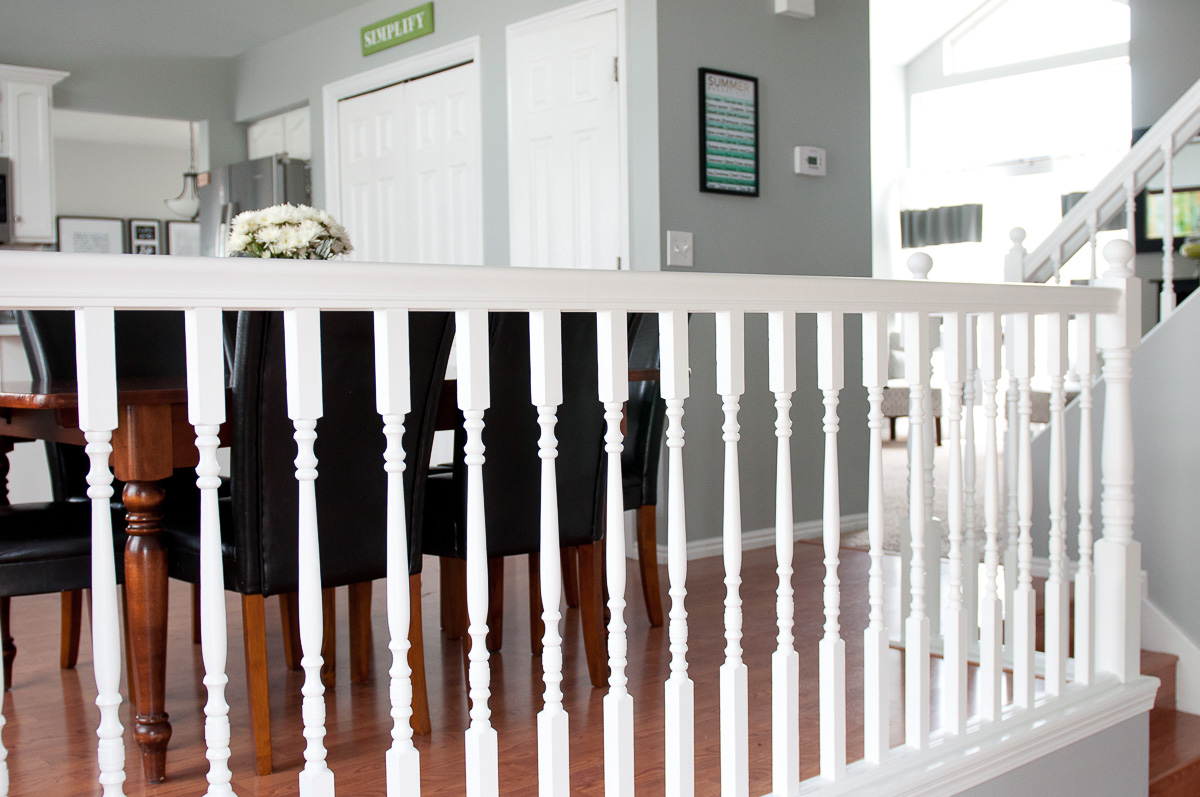 After wiping down the entire surface with rags dipped in TSP solution, I used two coats of Bulls Eye 1-2-3 primer from Zinsser. I love that it dried within thirty minutes since I had little ones around who would inevitably brush up against my work. I also loved that it was water based and low-VOC. I was a little worried at first when some yellow wood spots were showing through the primer, but when I added the second coat, I had complete coverage.

I grossly underestimated the amount of time it would take to prime each and every spindle, twice. But sanding every groove was completely out of the question.

I did minimal sanding except on the inevitable drips that resulted from painting on vertical spindles. I tried to be as careful as I could, but drips still happened. Light sanding was one thing I could do while Crew was awake, and he became my chief sanding assistant. 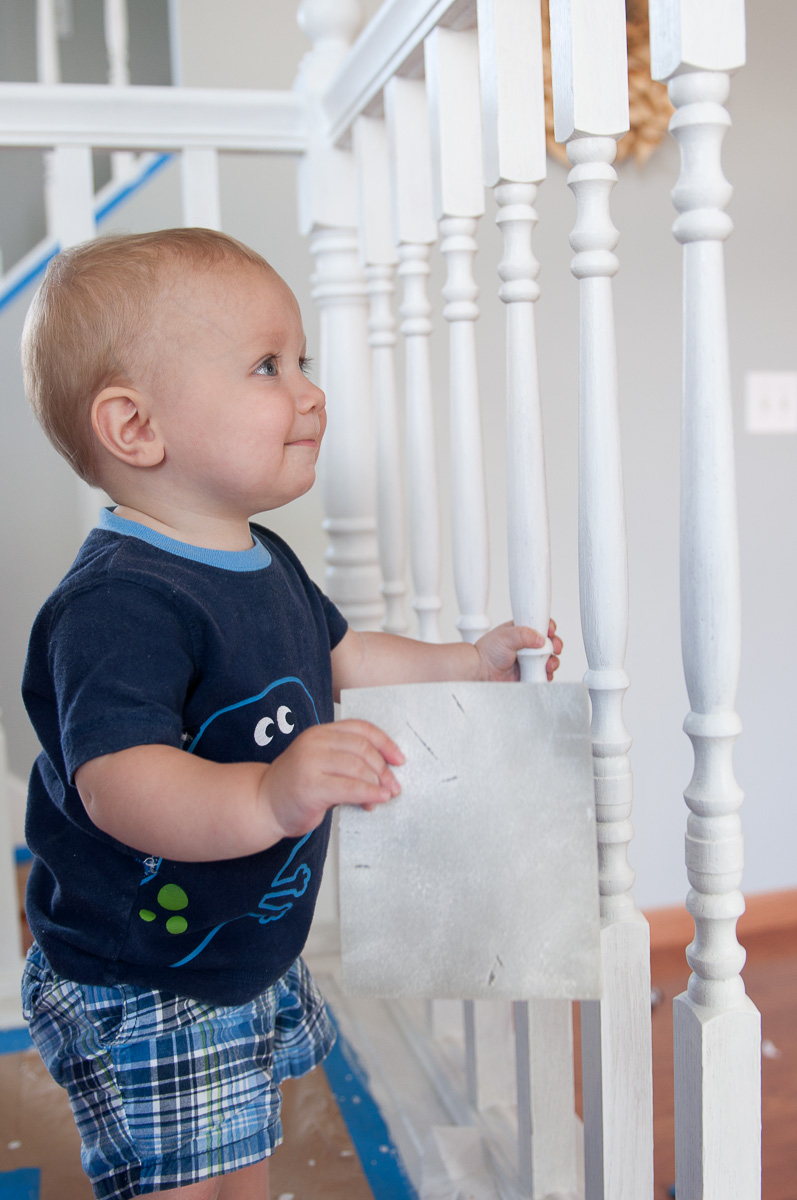 After everything was primed, I painted two coats of Sherwin Williams ProClassic Interior Acrylic Latex in semi-gloss. It was an expensive finishing paint, but since the handrails are in a high traffic area of our home, I wanted to make sure to invest in a product that looked professional and would last. I couldn’t be happier with the end result. 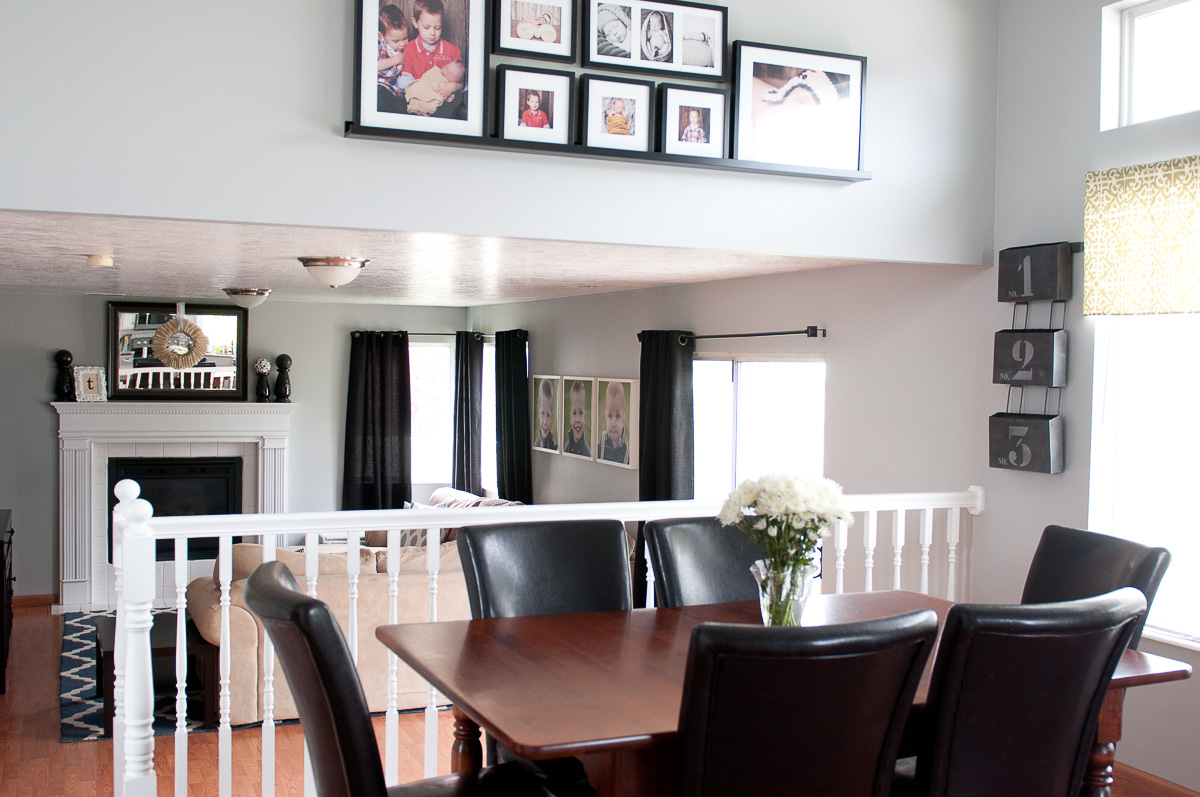 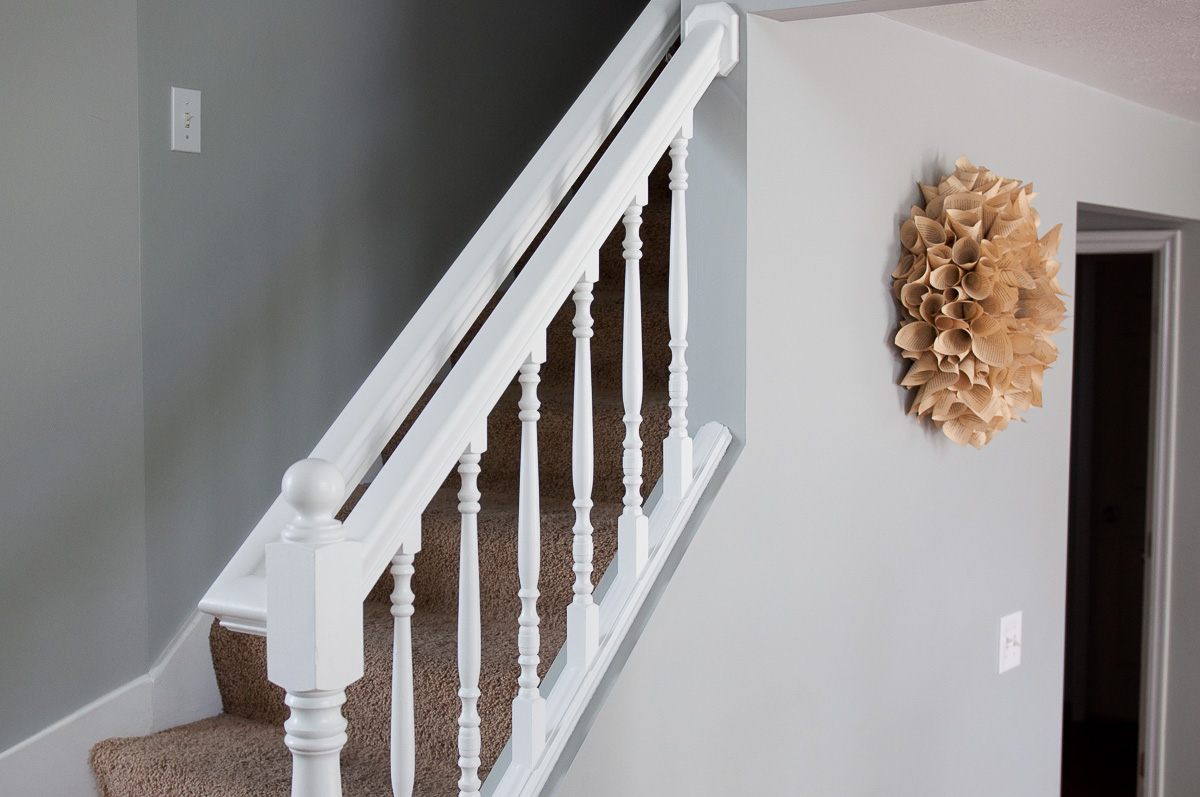 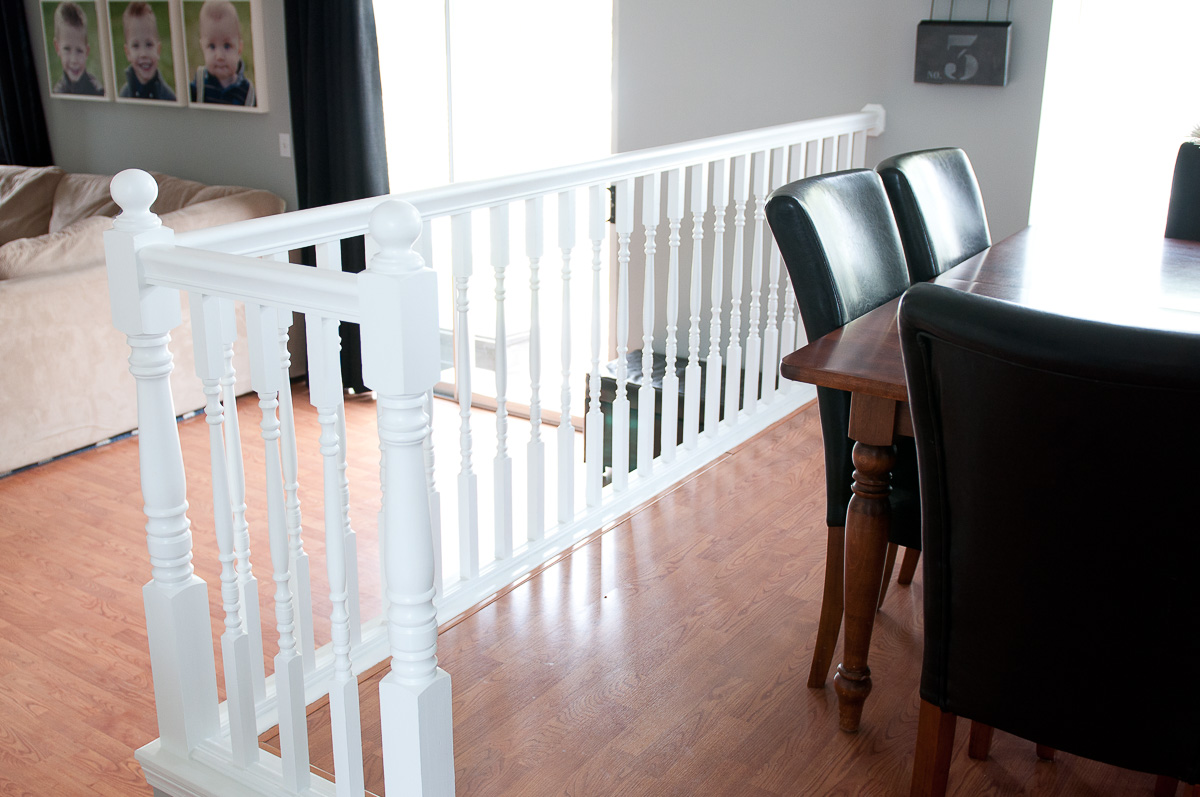 Now, to do something about those floors. Even after tons of updates, the projects in our home still seem never ending. But I think I’ll be satisfied for at least a while with this major improvement. It makes a world of difference.