Skip to content
I have so much to catch up on from September and October, but since I’m running a solid three months behind, I’m going to jump to Halloween so I’m not posting about it at Christmastime.
My younger two wore hand-me-down costumes. Some costumes are just too good to not reuse. Finn sported the golfer costume that Blake and Nash wore. The golfer skipped Crew because the boys were cops and robbers the year he would have fit into it, so it was a must to give the costume one more use.
Unlike Nash, Finn couldn’t get enough of wearing the cap and golf clubs. He got upset each time we took them off to buckle him in his carseat. As attached as he was to his costume, if you asked him what he was, he’d tell you, “I’m a pirate.”

Everything about Halloween was magical for Finn this year. He exclaimed, “pooky, pooky!” (spooky, spooky) every time he spotted anything Halloween related.

Crew’s enthusiasm for just about everything is off the charts. His anticipation leading up to the days of Halloween did not disappoint. He couldn’t have been more excited when I pulled pirate apparel out of the bin of costumes past. Blake was a pirate four years ago and it’s one of my favorite costumes.

The earring only lasted for a few shots and then Crew was over it.

Nash’s costume should have been the easiest to put together but it ended up taking the most time. There were many purchases and returns and last minute mending to get it right.
I have no clue who Ash Ketchum from Pokémon is, but all of Nash’s six year old costume dreams came true. It was worth the effort.

Blake has loved a lot of his costumes in the past but this year’s Michael Phelps ensemble went down as his favorite of all time.

It was the perfect costume for Blake. Not only is he a swimmer, but he was glued to the olympics this year watching Michael Phelps collect his final gold medals. Yes, Blake wore all 23 gold medals.

He almost dove in the pool right before we left to go trick-or-treating but I assured him that even though it was warm outside, a wet costume wouldn’t be ideal.

Instead, he made peace with dipping his toes in the water and relaxing poolside.

That was, of course, until Nash and I splashed water on him.

After our little prank we were officially ready to scour the neighborhood for candy. 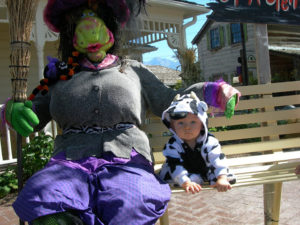 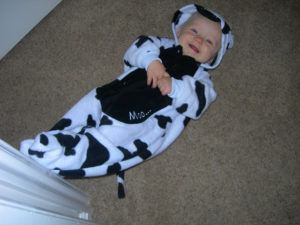