Skip to content
My December 5th due date came and went with no baby. I was pretty annoyed that I had nothing to show for my 40 weeks of pregnancy. I went into the doctor’s office for a check up on my due date, and while the nurse was weighing me, she joked, “You’re supposed to be down the street at the hospital today!”
I was not amused. Those pregnancy hormones got the best of me and I cried the whole way home. I wasn’t in a terrible amount of pain and misery; the time had just come to meet my baby boy!
Troy sensed my disappointment, so he suggested that I schedule a massage to ease my discomfort.
Two days later, on Friday, December 7th, I went into a massage school for a noon appointment. The student massage therapist looked me over and asked, “When are you due?” I responded, “Two days ago.” I could tell that she was nervous about having me as her client.
It turned out that she had every reason to be nervous, because as I was lying on the massage table, my water broke. I turned to her and told her what had happened, and she asked me if I wanted her to stop. I didn’t want to get jipped out of the remainder of my massage, so I replied, “Well, how much longer do I have?” She said I only had about five minutes left, so I decided that I better go.
I got in my car and called Troy. I told him that I was pretty sure that my water had just broken. He was on campus when I called him and he was a million times more anxious than I was when he heard the news. He thought that I should call the midwife immediately, but I figured that I wouldn’t go into the hospital for several more hours. I swung by Arby’s on the way home because I knew that once we got to the hospital, they wouldn’t let me eat. Troy met me at our apartment and while we were eating lunch, I started having contractions.
The contractions were mild at first and were spaced out every 3-5 minutes. Troy got into a frenzy trying to gather everything we needed for the hospital. I braced myself and finally called the midwife when the contractions got more intense. She told us that we could walk around the mall for a while to get the contractions going, or we could just come right in.
At that point, I was doubled over in pain with each contraction, so I didn’t think that walking around the mall was the best idea. We decided to head to the hospital, and Troy gave me a blessing before we left.
The contractions became even stronger on the way to the hospital. I had to crouch down and endure several contractions in the hallway between the car and the front desk. When we got to the desk, about 15 nurses all stopped what they were doing and gazed at me. One asked how she could help us and I responded, “Um, I’m in labor” (duh).
We checked in between 2:30 and 3pm and I was already dilated to 4cm. The nurse told me that I was a keeper.
Everything from then on out progressed very quickly. I went from a 4 to a 5 to a 7 and then to an 8+ in a short amount of time. I did not deal with the pain well at all. I was completely exhausted, and every time a contraction started, I screamed, “not again…I can’t do it again!” I couldn’t settle into any position to make the pain more durable, and I became completely indecisive with every suggestion that was given to me to help alleviate the pain. With every question I was asked, I sighed out a quick, “I don’t know.” The nurse tried to start an IV in case I opted for an epidural, but I panicked at the sight of the needle and wouldn’t let her come close to me.

A Lamaze coach ended up coming in to help me with the contractions since I wasn’t handling them very well. She coached me through breathing which helped a lot. By the time I was dilated to 7cm, I had had enough pain and decided that anything would be better than contractions, even if meant facing needles. I actually did really well with the IV that time around, but by the time they got enough fluids in me and we waited an hour for the anesthesiologist to arrive, I was already feeling the pressure of pushing.

I hardly even felt the epidural going in because the pain of the contraction I was having at the time completely overrode the poke of the needle. Within minutes after receiving the epidural, my legs felt warm, I felt a couple of light contractions, and then I felt nothing at all. It was pure sweet bliss.

The nurses told me that I had gone through the toughest pain of labor with no medication and I probably could have done the whole thing naturally, but I loved having that epidural. It was completely worth it to me, even though I only had it for the tail end of my delivery. I regained energy and even carried on civil conversations with the nurses and midwife, apologizing for my screaming and indecisiveness.

Shortly after receiving the epidural, I became fully dilated and it was time to start pushing. I pushed for about an hour, but I could have pushed all day because I couldn’t feel a thing! My midwife had to tell me each time I was having a contraction based on the monitor I was hooked up to. I wasn’t sure exactly which muscles to tighten for pushing because I couldn’t feel anything. The baby’s head started crowning at the same time that I began to feel really nauseated. I actually threw up, which tightened the exact right muscles to give the baby his final push.

Blake William Tanner arrived at 7:56 pm, about 7 hours after my water broke on the massage table.

I have to say that I was a bit distracted the moment he arrived because I was worried about my face and gown being dirty, and I was mad that the nurse was wiping my face with a cold washcloth as if I was a two year old. But when they laid that sweet, tiny, perfect little boy on my chest, I was completely taken back by the whole experience.

I couldn’t believe that Blake was really here. We cried a little when we heard his tiny cry for the first time. I hardly knew what to feel at the time; I was so happy and yet it took me a while to feel like he was really ours.

Troy went out to the lobby where our parents were anxiously waiting and told them the happy news. It was surreal to get to share our firstborn son with our parents and Troy’s siblings. We were so elated and completely in awe of our tiny little miracle. 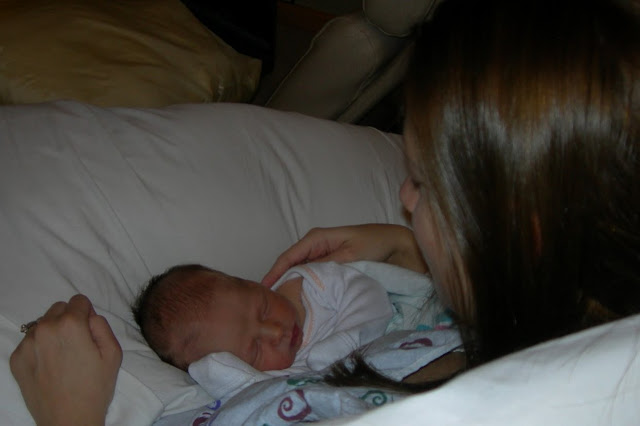