Skip to content
Problem Number 1: Blake does not roll over onto his back once he is on his tummy. I realize that there are much worse and more serious problems that exist with many babies. However, for us, it really has been a struggle for the past couple of months. Blake immediately rolls onto his tummy whenever he is put into his crib, gets tired and mad, and forgets that he can roll back over. He has trouble falling asleep and staying asleep because of his rolling difficulties. Every baby has their “thing” and this has been Blake’s.

Solution: I taught him how to do it (or at least I like to take the credit). I practiced with him all week by rolling him with a blanket. I pulled up the edge which made him roll by himself. He actually thought it was a fun game, and today, all of that rolling practice proved to be very worthwhile! He has been rolling in both directions continuously. Every time I have gotten him up from a nap, instead of the mad, exhausted grunts of struggle that he usually exhibits on his tummy, he has been happily laying on his back with a smile. Hooray Triumphant Blake!

Problem Number 2: We have an apartment lease that we are trying to get out of early because we are moving.
Solution: I posted it on Craigslist today. Apparently married housing is a hot commodity because within 2 hours of my posting, I received 41 phone calls, 3 people looked at it, a deposit was made and a contract was signed. It was CRAZY! Everytime I had a break in between phone calls to check my voice mail, I had 7 or 8 new messages. I had to stop answering my phone and change my voice mail to say the apartment had been rented. I had no idea it would be snatched up so fast! It’s no beauty by any means, but married housing is so hard to find that people from out of state were even making commitments to put a deposit down today. We’re just glad it is off our shoulders. Blake is also glad that he gets his mommy back from phone call mania. Until packing mania begins…
Problem Number 3: Blake is very ticklish.
Solution: Make a video of his giggling and share it with all of you. 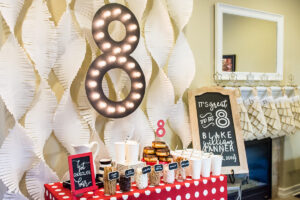 When Your Little Boy Starts Curling His Eyelashes…