Skip to content
Troy was rewarded with a half day off work this month because his team was doing so well. We were debating about what to do with such a luxury, until I remembered that Twilight came out today. He didn’t really have a desire to see Twilight (mostly because of all the hype), but really wanted to see the new James Bond movie. He got really excited when he suggested, “You can go to Twilight and I’ll go to James Bond on my half day!” Then, after thinking about it for awhile, he wondered, what has our marriage come to if we go to the movie theater and see different movies? So then, he came up with what he thought was an even more brilliant idea. He said, “Let’s go to BOTH!”

So, thanks to my wonderful mother-in-law for watching our son, we saw back-to-back matinee movies. I have never done that before. It was a lot of sitting, but well worth the sacrifice to get my sweet hubby to go to Twilight (which he liked, for the record). I really liked Twilight too. I thought it portrayed the book very well for the most part, but a lot was spoiled in the trailer. As for James Bond, the first one was a lot better. I tend to lose interest during all the action scenes they throw in. All in all, it was a fun day and it marks our second date in the month of November. 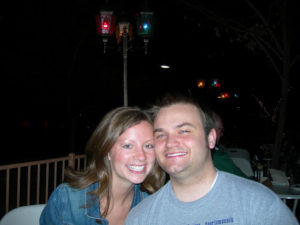