Skip to content
We survived another all day road trip back home. I learned a few tricks along the way to make traveling alone with a one year old a little more bearable.
The front seat was set up with a bin containing lots of books and toys to hand back at any time. There was also a cooler packed with string cheese, fruit, milk, and water, and the diaper bag for easy access at pit stops. 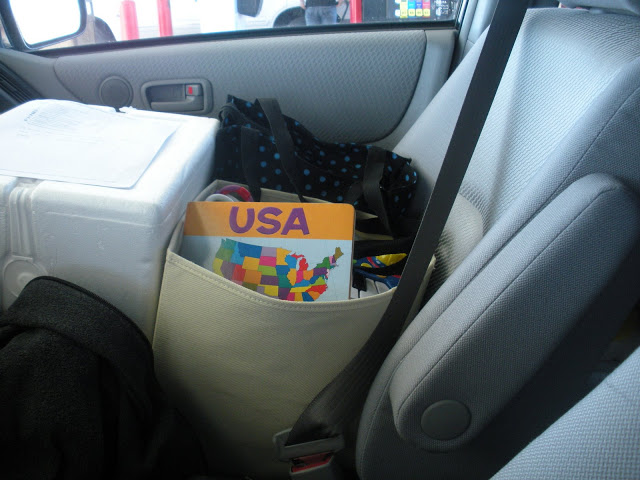 The back seat set up was set up with packed bins along the floor and another lid laying across the top. This created a shelf so that I could easily retrieve toys when they were dropped without having to reach back too far.
We buckled in both of Blake’s carseats because at 20 pounds, he could fit in both his infant carseat and his big boy carseat. I transferred him to the infant carseat when I was trying to get him to take a nap, but he also had the option of facing forward in his big carseat to play and see the passing world. The other seat was empty to allow me to get back there for quick diaper changes and snack breaks. 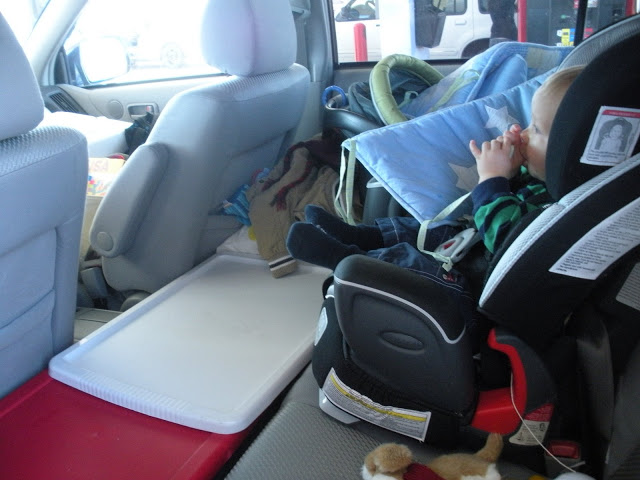 We made 6 stops in total. I thought that was pretty good for traveling with a toddler. Our longest stop was for lunch at Burger King. Blake devoured the Kraft Mac n’ Cheese that they now have on their menu.
Another trick I learned was to keep an umbrella stroller packed on top of the luggage. I didn’t want to have Blake crawling around on the dirty public restroom floors when we made pit stops. Since I was alone and holding him would have been difficult, I loaded him in the stroller for restroom stops. It was a big pain but it worked. 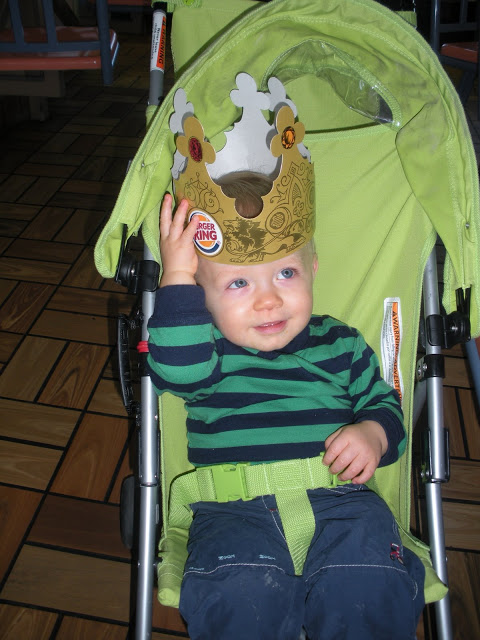 It was important to let the little guy use his mobility and move around throughout the day. I let him crawl around Burger King’s play place for a while since he was going to be strapped in for another 7 hours. 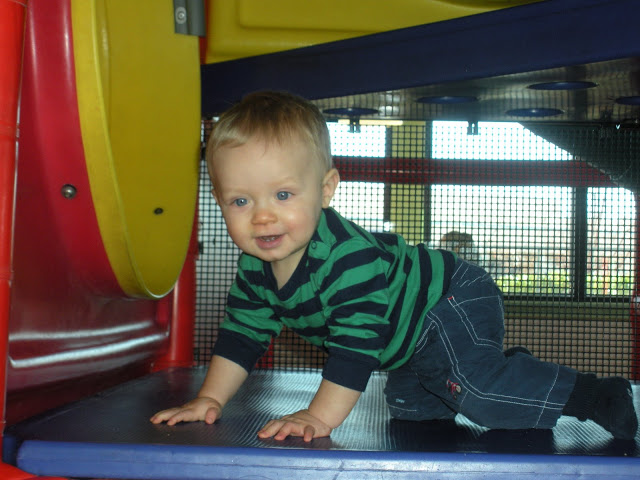 He enjoyed his freedom and the gears. 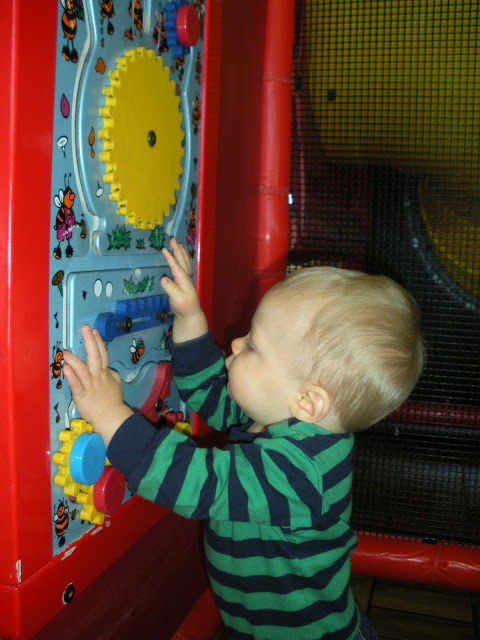 We passed by the beautiful Lake Powell. 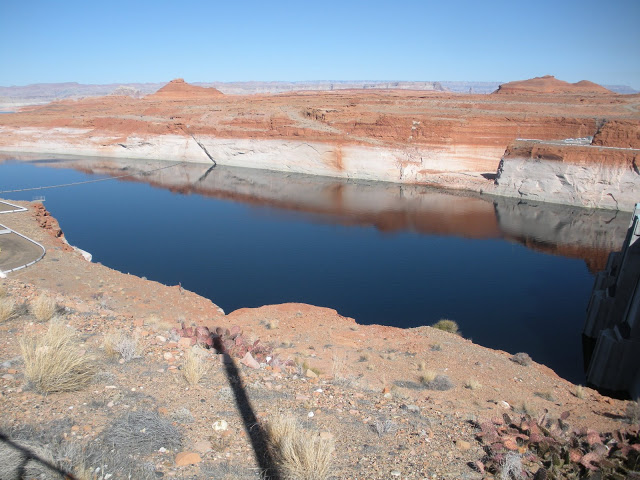 Then, once we entered Utah, we saw mountains and snow for hundreds of miles. 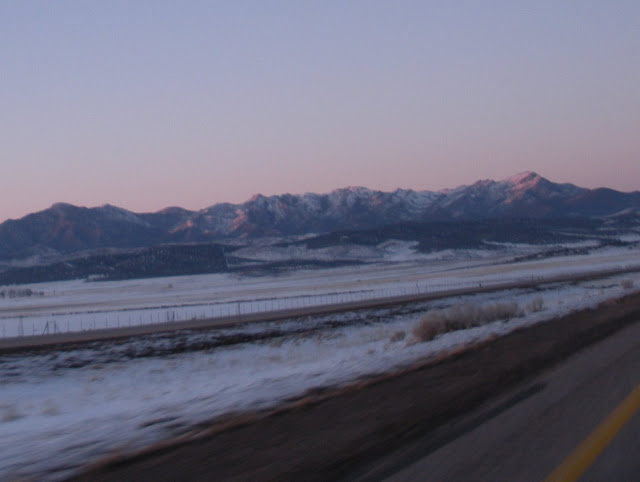 During our 12 hour drive, Blake slept a whole 10 minutes. He usually takes about 3 to 4 hours worth of naps each day. Most children are lured to sleep easily in the car, but Blake won’t sleep anywhere but his crib, even with his bumper pad lovey. He had 3 major overtired, confined-in-the-carseat meltdowns, but gratefully he was happy the rest of the day. 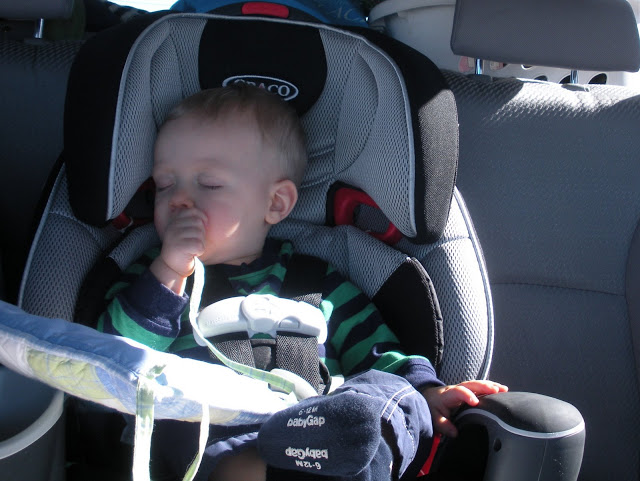 12 hours of driving + 2 Crazies = A few attempts to document our progress.
We pulled over on the side of the road during one of Blake’s meltdowns, and of course he was completely fine once he was let loose. We entertained each other quite well on the road as well. I promise I was being safe with the camera. I held it up behind me as I drove, and did a pretty good job of centering Blake even though I couldn’t see the screen.
We made it through our road trip, and we are so glad to be home.