Skip to content
It has been a while since I’ve done a true update on Blake. He is fifteen months old already. 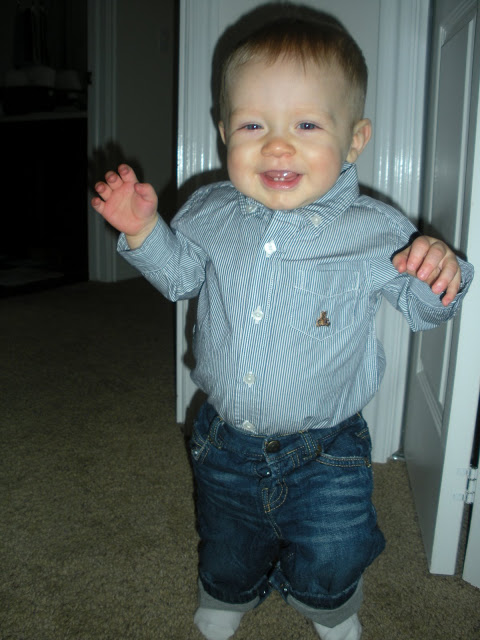 There are only three more months until Blake goes to nursery at church. Not that that is incredibly significant with our current 1pm church time, which allows for many cranky overtired toddlers, but regardless, Blake is growing up. 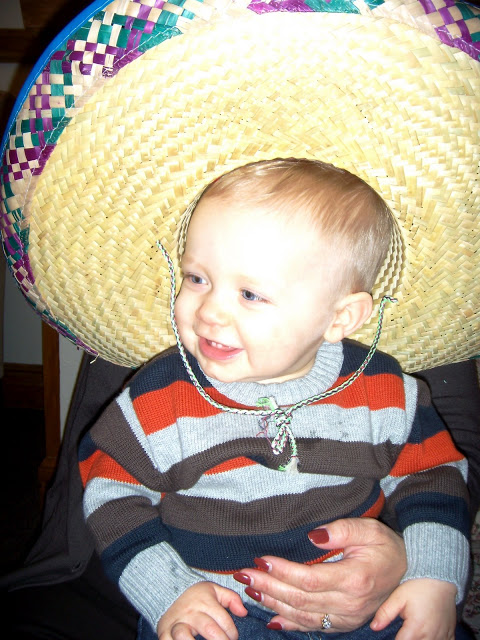 He is a riot these days. His favorite word is “uh-oh,” which he repeats incessantly like a little parrot a million times a day. It is the first thing I hear over the monitor in the morning. It is what he tells people in the check-out lane of the grocery store. I don’t mind because it is fun to hear his little voice. 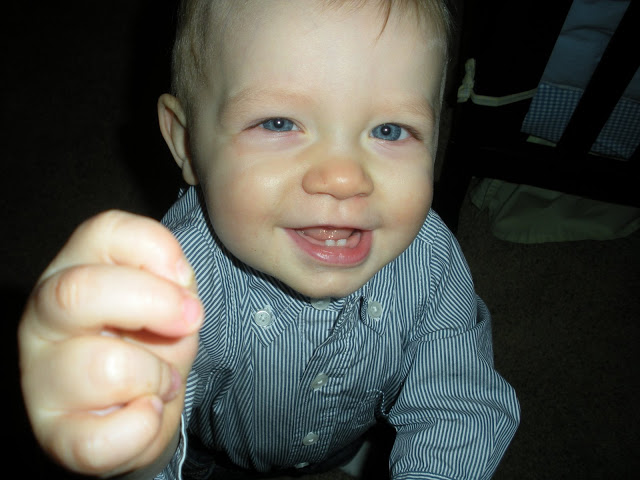 Blake is a little sweetheart when he wants to be. He knows what it means to give kisses. I was having an emotional day (those post-weaning hormonal imbalances are killer) the other day and he came up to me and smacked two little kisses right on my lips. How could that not make me smile? He also gives kisses when asked to his daddy, babies in books, and his stuffed animals. 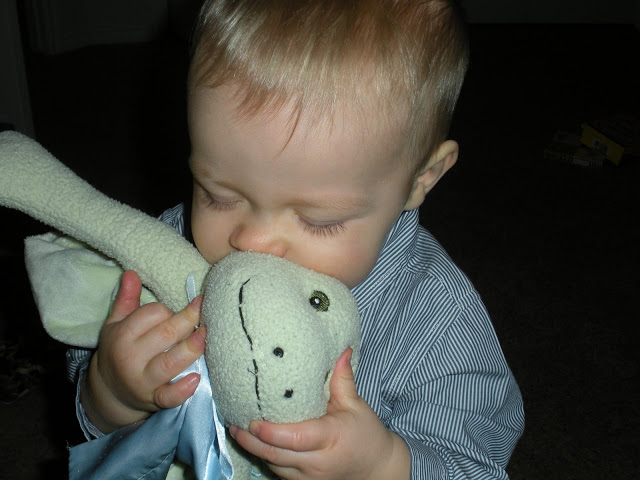 His favorite activity is to relocate items in our house. In the past week, I have found Troy’s keys and cuff links in the silverware tray of the dishwasher, the downstairs remote control in the upstairs bathroom drawer, a pen in the paper feed tray of the printer, Troy’s library card underneath the rug, a DVD we were missing in between the couch cushions, my camera in the lost and found at church (Blake pulled it out of my bag and it was left under the bench), refrigerator magnets in a kitchen cupboard, measuring spoons in Blake’s dresser drawer, and a box of nerds leftover from Halloween behind the TV. 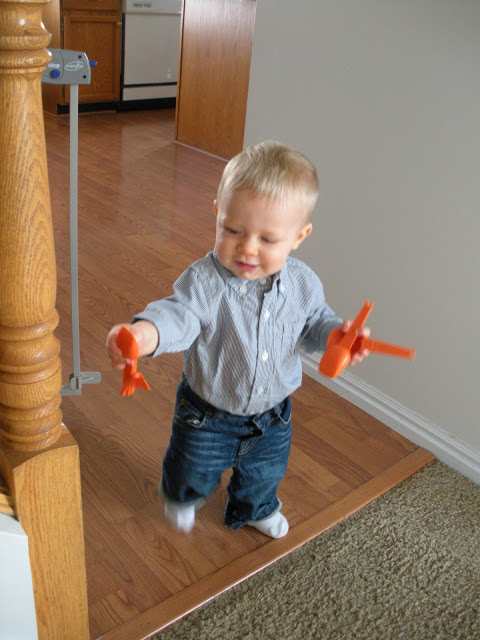 Blake begs all day long to play in the fridge. If he is across the room and he hears it open, he rushes over to get into the shelves. He cries and bangs on the door if I shut it before he can get to it. I usually don’t let him play inside the fridge because someone in our household gets upset about the energy lost by leaving the door open. However, from time to time, Blake gets there fast enough. If I am trying to make dinner and would rather not have a whiny toddler clinging onto my leg, I sometimes let him have a few minutes in his favorite spot. 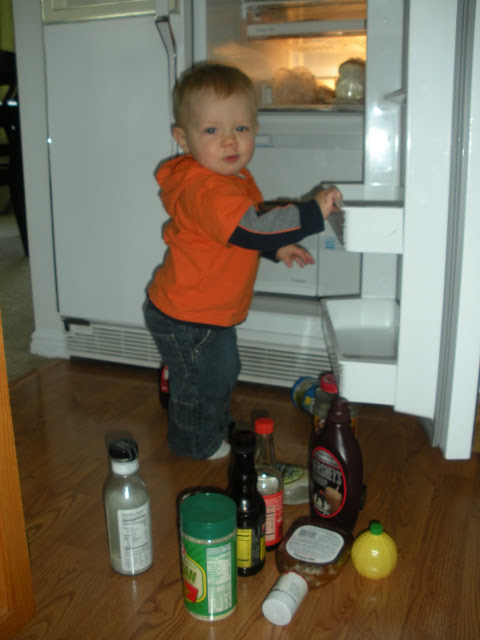 Who knew that Blake would have some eyelashes? I don’t know where he got them from because both Troy’s and mine are almost non-existent. 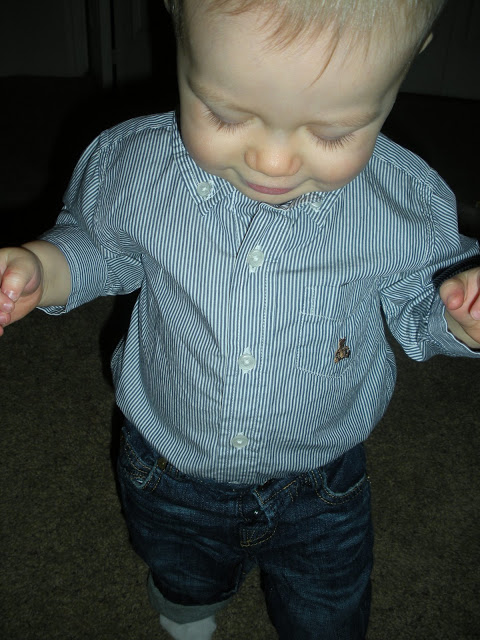 Blake’s favorite toy of all time is still the cell phone. The cell phone is what bribed him to crawl. It is what he destroyed during his drooly, chew-on-everything phase. Now, it is what he uses as a mode of communication. He has to say “hi” to everyone I talk to, and he usually hangs up on them in the process. He also carries around items like cameras and remote controls and holds them up to his ear as if they are cell phones. 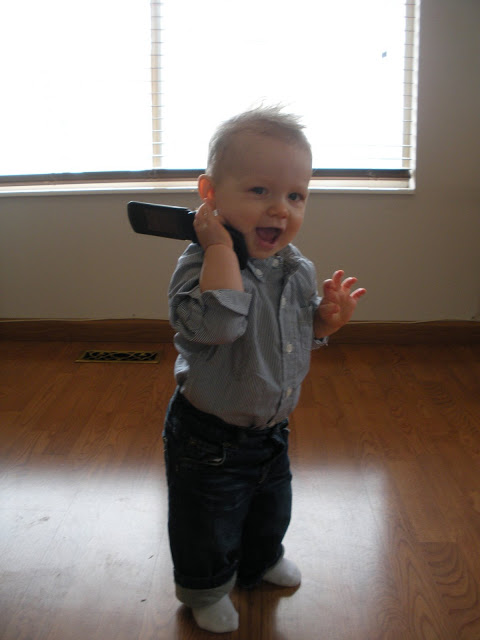