Skip to content
I was incredibly privileged to marry into a family with a great legacy of service and dedication. This legacy started with a man named John Tanner, who was the first in his family to join our church in 1832. John Tanner was Troy’s great-great-great-great grandfather.

Last night, we attended the premiere of “A Treasure in Heaven: The John Tanner Story” in the Conference Center Theater. This 21-minute film will be released on November 3rd to the public, and will document the story of John Tanner, a man among giants in the early days of the church.

John Tanner was a wealthy man with a large family. He loaned thousands of dollars to the building of the Kirtland Temple, saving it from impeding foreclosure. He lost the last of his wealth when the Kirtland Safety Society failed, forcing his family to beg for food as they made their journey to Missouri. When John Tanner was called on a mission to the Eastern States, he went to settle the manner of the temple loan with Joseph Smith. John ripped up the note that Joseph had previously written and told him that he was welcome to the money loaned. Joseph then gave John the prophetic blessing; “God bless you, Father Tanner, you and your children shall never beg for bread again.”
That prophecy was amply fulfilled, and the story of this blessing has been handed down and remembered by all of the Tanner posterity. It is often quoted as being the reason for the financial prosperity and success of many of the Tanners. Each of Troy’s 13 aunts and uncles display a painting in their home depicting the prophetic blessing given by the prophet Joseph to John Tanner.
John was a faithful follower of Christ. He gave his all to the gospel and the Church. He created a legacy of faith that blesses my life and the lives of countless others every day. This film was a real heart-wrencher for me as I considered the hardships and sacrifices endured by this faithful man, and I increased in my feelings of kinship towards the Tanner family.
The Conference Center Theater’s 900 seats were filled to capacity with descendants of John Tanner for the premiere. Even though there are now tens of thousands of Tanner posterity, I was still shocked when we entered the theater and joined with hundreds and hundreds of relatives to honor this great man. Among his descendants were prominent church members including apostles N. Eldon Tanner and Hugh B. Brown, Presiding Bishop Victor L. Brown, Fern Tanner Lee, wife of President Harold B. Lee, and Presidency of the Seventy member Franklin D. Richards.
What also made this premiere so exciting is that Troy’s parents and sister starred in the film as extras. The producer tried to cast a lot of actual Tanner descendants. My father-in-law had to grow out his beard for several months to be able to participate. He grew that beard with style in his professional career and during an African Safari. The scratchy, unkempt look paid off because he actually scored a speaking part as one of the members of Joseph Smith’s council. It was fun to see our family on the big screen. 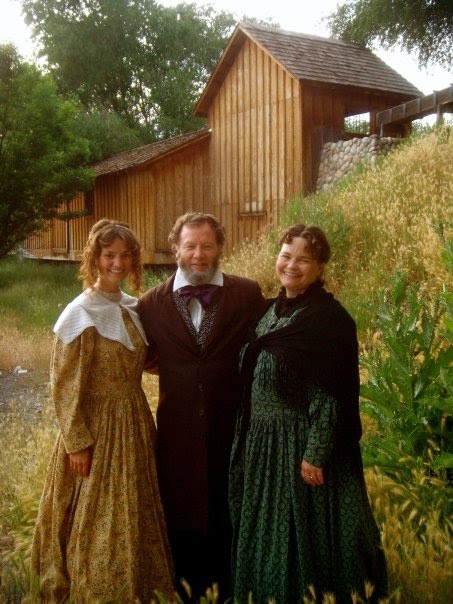