Skip to content
There is nothing better than celebrating your child’s birthday. It is so much better than your own birthday. It is incredible to watch the anticipation in his eyes as he tears open the wrapping paper and discovers new toys. You laugh as he devours his chocolate cake, a rare treat, and delights in making a huge mess. You know that your child knows that he is the most important person in the world on his special day, and nothing else brings you more pride. You look around and see family members celebrating the life of the little being that brings everyone so much joy. If I could re-live specific days throughout my life, this would definitely be one of them. Blake’s second birthday party was just perfect. 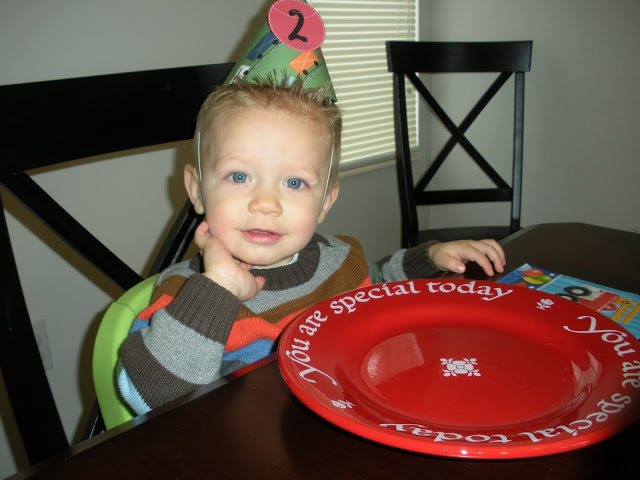 The theme was transportation; cars, trucks, buses, planes, and trains. I kept it pretty simple but I wouldn’t be an indulgent mom or true to my craftiness if I didn’t get a little carried away with the theme. I made some paper trains to hang from the light and found the most adorable bus and airplane bath toys to use as balloon weights. 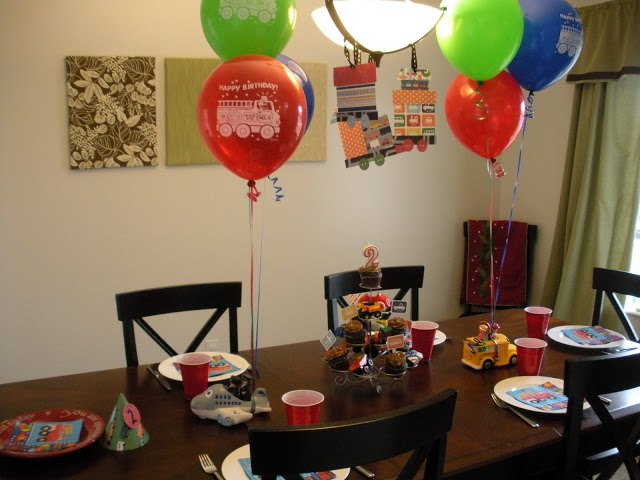 Since there was just a small group attending the party, I filled the empty cupcake spots with cars, trucks, trains, and planes. 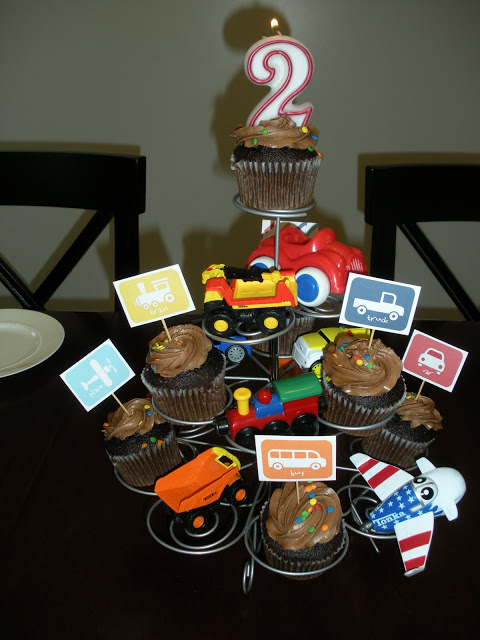 I made a transportation banner too, of course. 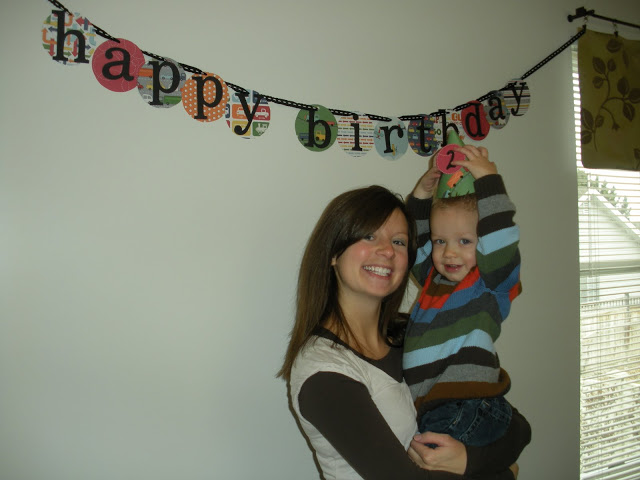 We decided to have a brunch birthday party since December is a busy time and Blake has the most energy in the morning. It was fun to plan brunch foods; waffles, mini-quiches, and my favorite; fruit kabobs. 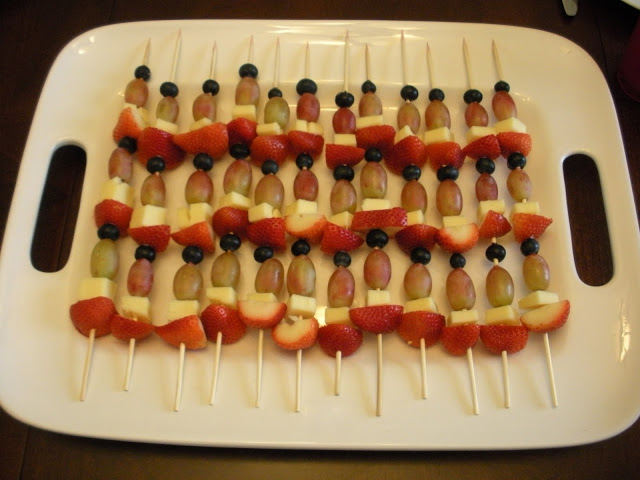 The birthday boy probably could have played with the balloons all day and not even cared about opening his presents. Love this age 🙂 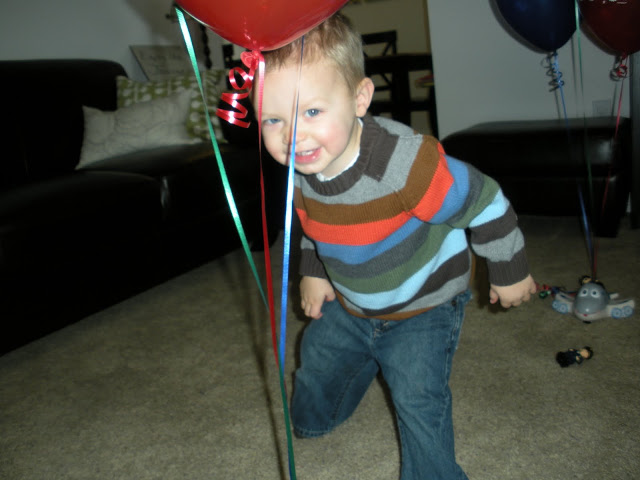 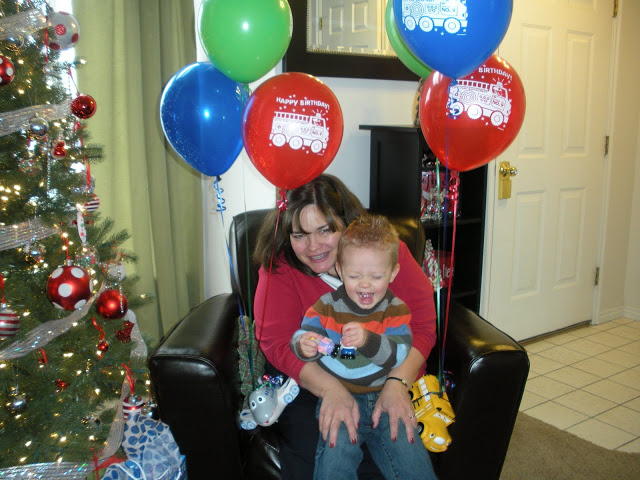 On to the presents! Blake carefully tore little minuscule pieces of wrapping paper off each gift, taking forever to get to the actual item. I have a feeling that Christmas morning is going to be really slow this year. He absolutely loved every present. He focused on and wanted to play with each item individually before moving on to the next gift. We even had to move some puzzles and a fire truck into the other room to get him to open the next present. It was really sweet how he was genuinely interested in every single item he received. He played all day long with his new toys as he discovered them over and over. Every time he wakes up from a nap now, he immediately asks for “toys?” 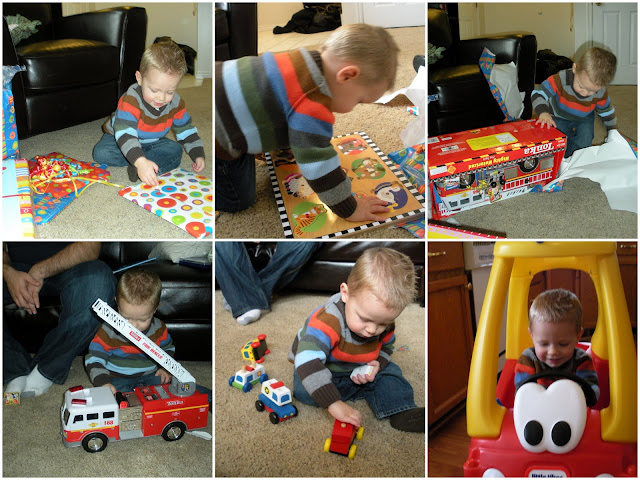 One of the funniest things that Blake did was when he opened what was supposed to be a shopping cart, he immediately disappeared into the kitchen with this unassembled part. I guess he thought it was some sort of sliding toboggan because he tried to slide all around on it! We laughed really hard at his cleverness and at the fact that he knew that it would slide better on the hard floor than the carpet. He does now love his assembled shopping cart too, but I guess this toy is multi-functional. 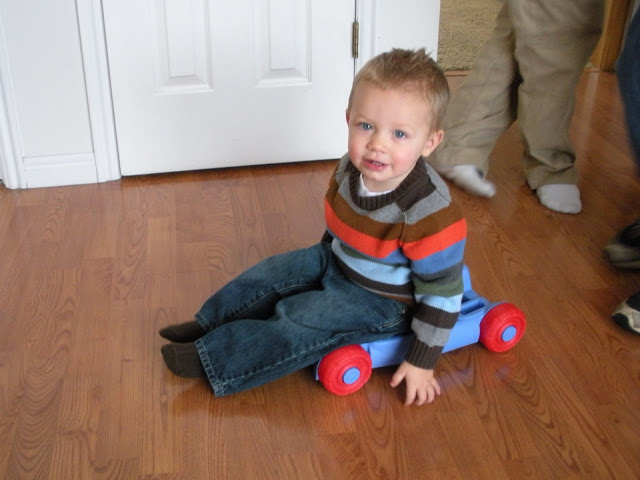 And finally, the kitchen! 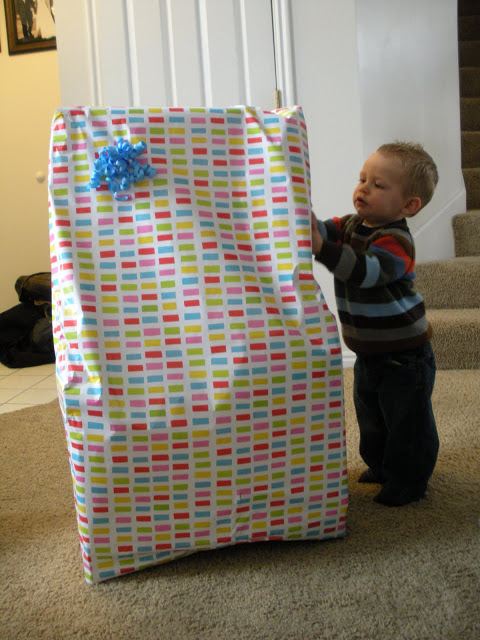 Blake loves it – just like I thought he would! Troy asked me the night before the party, “What if Blake doesn’t get as excited about the kitchen as you think he will? Will you be crushed after putting so much work into it?” I said no, but thankfully he loves his new play kitchen. It surprised me how much he know how to do without me even showing him; filling up his cup at the sink, using the right utensils to cook with in the pan, and putting appropriate food items in the oven. 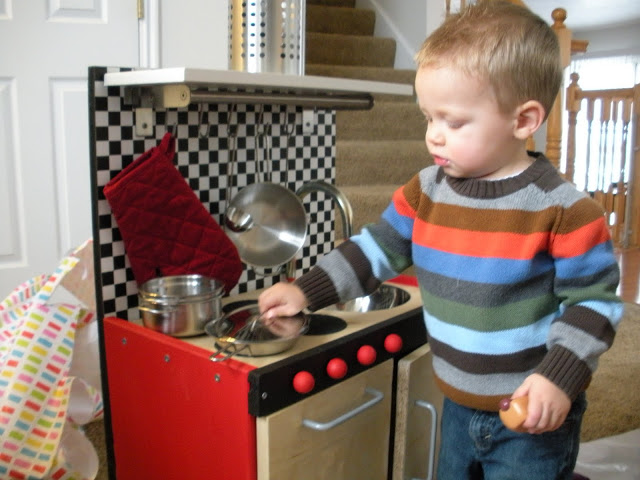 The adults liked the kitchen as well. I have to add that birthdays for children are just as much for parents as they are for them since we are also the ones who play with these toys day after day. 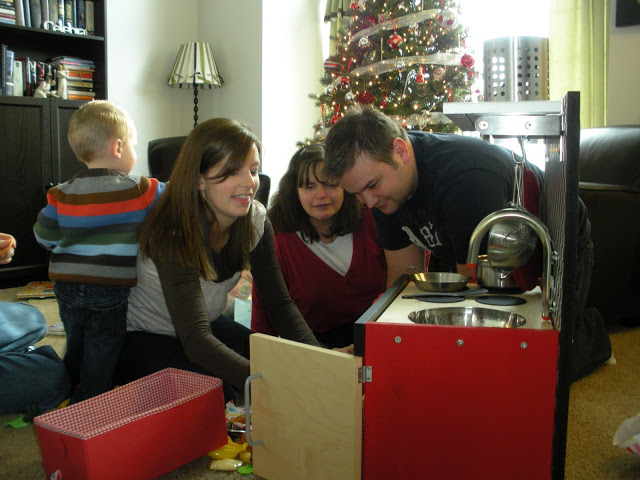 The funniest moment of the party was when Troy was comparing the proportions of the plastic food. I guess you had to be there, but we were just rolling with laughter when he was pointing out how the croissant and strip of bacon were the same size as the whole chicken. 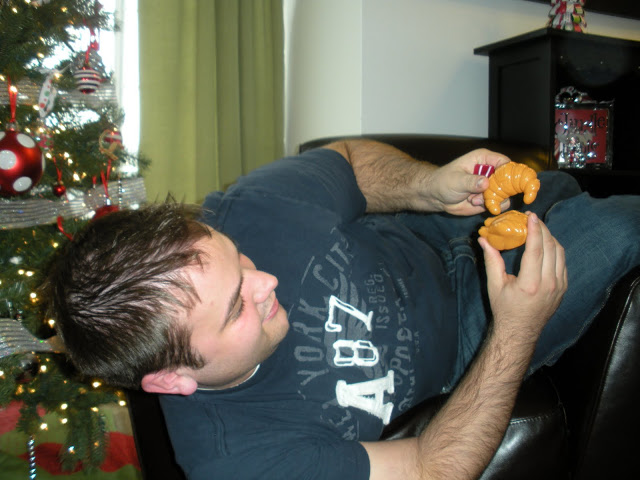 Lastly was some singing and a candle to blow out for the birthday boy. 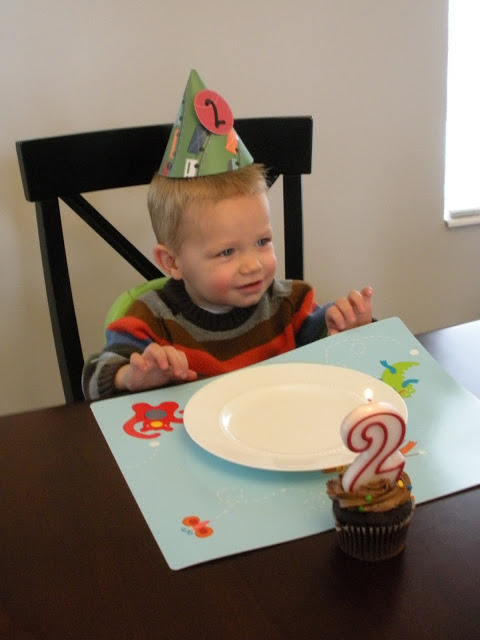 Unlike last year, Blake knew exactly what to do with his cupcake. In fact, he begged for “take” all morning. 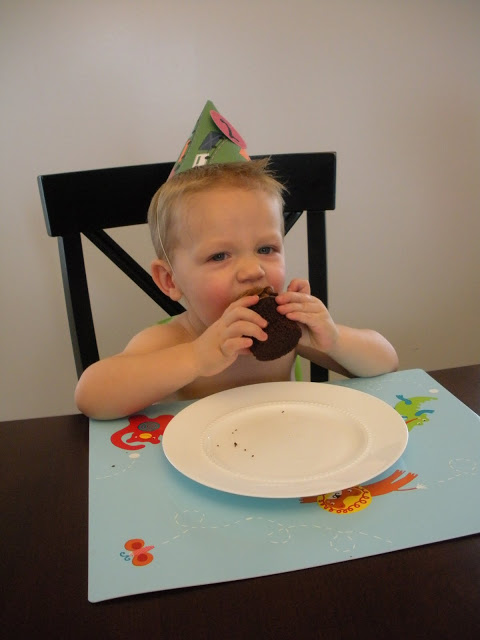 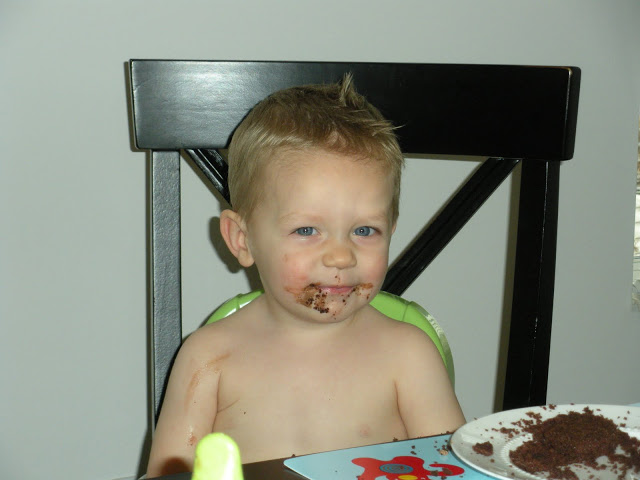