Skip to content
…was a clean house and a bag of Cadbury mini-eggs. It’s only 2pm but I think it’s pretty safe to say that neither of these things are going to happen. I came down with this awful cold (passed along from the dear husband) this week and it has been a struggle to have energy to do anything productive. I have had the most restless insomniac nights and coupled with being uncomfortable and having to use the bathroom all night long, I have not made any progress towards recovery. (For the record, I’d still take this over the three miserable nauseated/throwing up months!) We haven’t left the house for a few days and when I walked out to the mailbox this morning and realized that the freezing 30mph windchill had knocked over both of our trash cans, the last thing I wanted to do was venture outside. I wanted to stay indoors and vacuum and clean the bathrooms and kitchen because I always feel better when the house is clean. However, we literally had no food in the house, so after weighing the options, I decided that it would be a better use of my time to try to allocate some food for my family. I gathered all the energy I had to shower and bathe the toddler so that we could go to my least favorite grocery store (which shall remain nameless). Then I thought; maybe I can find my favorite candy of all time, Cadbury mini-eggs, and then this awful venture out of the house won’t be so bad! Maybe it’s still a little too early on January 22nd for Easter candy to stock the shelves, but once the Valentine’s day candy is out, there is typically a fair shot of spotting Cadbury mini-eggs as well. My mom and friends and I have been known to call each other the moment we first spot them during the season, and I thought that today just might be my lucky day! 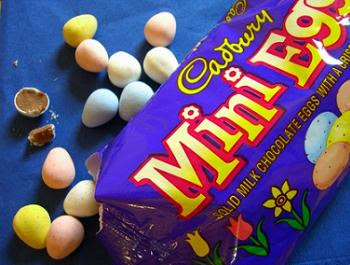 Unfortunately, sweet goodness in a bag was not found on the shelves of the worthless store. I settled for another comfort food, a package of cookie dough, which was lame-o in comparison (my toddler even echoed “lame-o” from his seat in the cart). Now, I have a million grocery bags to unload from my car, no mini-eggs to show for the trip, my head hurts more and the congestion is worse than when I first left the house, Blake went down for his nap an hour late due to our lengthy trip to the lousy store, and the last thing I have energy for is cleaning and vacuuming. I think I’m going to listen to my body for once and take a nap. I just feel so unsatisfied when I don’t accomplish what I have set out to do for the day.
On a more positive note, this is what made me laugh today: 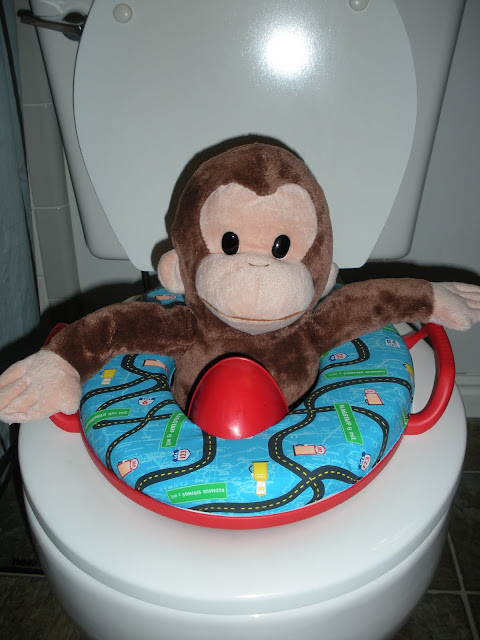 Blake decided that George needed to go potty. He feeds George and puts him to bed all the time, so of course in his eyes it was only natural that George would have to use the bathroom as well. Blake fished out his potty seat (which he has no desire use himself) from the cupboard under the sink, and put George into position. When he showed me the scene of the crime, he was so proud of his creativity that I just had to laugh instead of cringe at George’s dripping wet toilet-water feet. George is now taking a trip through the washing machine.
On another positive note, I have exactly one month until my due date!