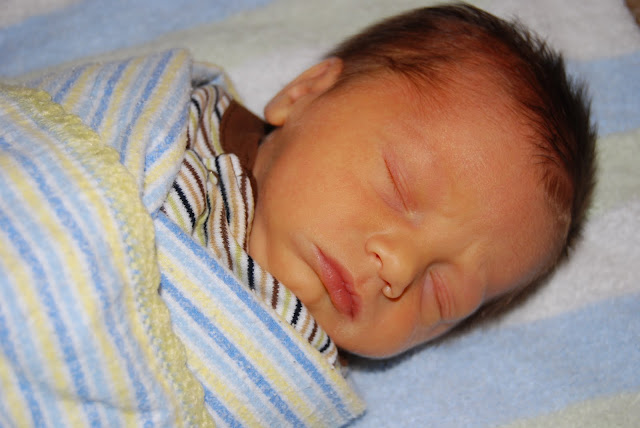 Here is the short version:

I endured only 3 hours of labor. I was dilated to 7cm when we arrived at the hospital, and Nash was born 1 hour later after 3½ minutes of pushing.

For those who are interested, here is the slightly longer version:
I guess you could say it all began on Monday night. Blake had a stomach bug all weekend and right before bed he threw up for what seemed like the hundredth time all over me. After getting him cleaned up and taking my own shower, I started to get really nauseous. I went to bed early but woke up at 11pm and every half-hour thereafter to empty the contents of my stomach. I started to get really shaky and had constant pain in my abdomen. Around 1:30am I called the on-call midwife to see if the nausea and pain were anything I should be worried about since I was 37 weeks pregnant. She asked me how soon I could be at the hospital, and I told her at least an hour. I woke Troy up, called his mom to come over and stay with Blake, and we made our way to the hospital in the middle of the night. I was severely dehydrated and endured a horrible IV experience to replenish the fluids that I had lost. They monitored the baby’s heart rate all night but didn’t check to see if I was dilated or anything. After 3 medicines for nausea that didn’t work and 3 bags of intravenous fluid, they let me go home. I am absolutely horrible with needles and I thought that it was so unfair that I endured a night with an IV and had no baby to show for it! I joked that it would have been really nice if they could have just capped off that IV and had it ready to go for my delivery three weeks later.
We came home around 7am and absolutely crashed since we had gotten no sleep throughout the night. I was so drugged up by that point that I was completely oblivious to anything going on with my child at home. I woke up around 1pm and Blake was not in the house. I called my mom-in-law to locate him and found that he was happily playing (although still throwing up) at her house. We decided to let him nap there for the afternoon and pick him up later. I made a few other phone calls to share the saga of the night’s events. I said, “Well, I spent the night in Labor & Delivery, but not to have a baby.” After chatting on the phone for awhile, at 2:30pm I started to feel what could only be described as contractions. I thought that was weird since my water hadn’t broken, but the pains I felt were unmistakeably contractions. They were pretty strong, so I decided to wake Troy up. He looked at me with a groggy “Are you kidding me?” expression when I told him I thought I was having contractions. He timed them and we realized that they were only 3 minutes apart. We didn’t know if we were going to have a baby that day or if they would try to stop the labor since it was 3 weeks before my due date.
At that point, we prepared to make our way back to the hospital. Troy called the midwife who told us to wait about two hours and then call her again with an update. Troy convinced her to let us wait one hour instead of two since my contractions were strong, decently close together, and my first delivery wasn’t that long. That gave us some time to throw some bags together for the hospital. I showered and packed in between contractions but I was in so much pain that I was already on my hands and knees to endure each one. After an hour, my contractions were 1½ minutes apart, so the midwife gave us the clear to check back into Labor & Delivery. We live a half-hour away from the hospital and that car ride was torture. My original plan was to have the epidural in place much earlier in labor, and way before we even left our house. All I could think about besides wanting to pass out was the sweet numb relief that the epidural would give. I had no choice but to breathe through the contractions, to which the yogic breathing that I’ve learned immensely helped with. Troy kept asking me what I needed and I’m pretty sure that I snapped “Don’t ask me questions!” back at him. I get pretty indecisive when I’m in labor.
We checked back into the exact same triage we had spent the night in, and discovered that I was already dilated to 7cm. I wasn’t really surprised because my contractions definitely felt strong enough to be at a 7. I was still bound and determined to get that epidural. So, they rushed me to delivery, I was given another IV, and the epidural took effect just as I became fully dilated. My midwife broke my water and that’s when things started to get really scary. The baby’s heart rate drastically dropped and doctors and nurses started flooding into the room. Tables with vacuums and forceps were brought in, preparations were made for an emergency c-section, and I had about 6 people standing around my bed telling me that I needed to push really hard and get that baby OUT. Thankfully, I was able to push the baby out in 3½ minutes and he was immediately taken from me. The pediatrician assisted him with his breathing at first and he scored pretty low on his first Apgar test. However, from then on out, his heart rate went back up, his breathing was fine, and he was completely healthy. We were so blessed to have a healthy baby after a few frightening final minutes of delivery.
Some other tender mercies that we experienced with this delivery:
We just love our little Nash and feel incredibly blessed to have him in our family!