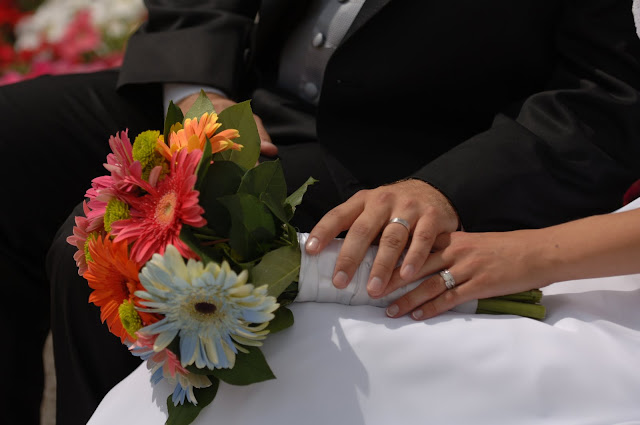 A wedding ring is a daily symbol of commitment and loyalty to the one you love. Troy lost his ring about six months ago. I wasn’t at all surprised. In fact, I was amazed that it lasted through more than three years of marriage! He took it off and played with it all the time and constantly spun it on flat surfaces. It’s a good thing we’re not very sentimental people because it was just a matter of time before it disappeared forever. However, after six months of appearing as if not married, I thought it was time to get him a new ring. We went on a Valentine’s date the last weekend of January, which was good since we ended up having our baby a few days later. I thought it would be the perfect time to give Troy a replacement ring. I got him a very simple inexpensive ring knowing that he would probably lose that ring too. He was not very thrilled. He thought I was trying to “claim my territory.” I guess that might have been part of it, but I thought that he would genuinely appreciate the thoughtfulness. I think the new ring has spent more time spinning than it has on his ring finger.
That brings me to my next story about wedding rings, or rather the lack thereof. This is a classic “You know you’re at Walmart when…” story. The day before Nash was born, I went to Walmart to pick up something that I had shipped to the store. A gangly man in his mid-twenties helped me carry the item out to my car. While en route, he asked me how old Blake was. He then asked me when my baby was due. I answered both of his questions, and then in all seriousness, he asked, “Same dad?” I thought, are you kidding me? I frankly responded, “Yup.” Who asks that kind of question? I mean, really? Do I look like the type of person that employs two different dads for my children within two years? He then proceeded to ask me a series of inappropriate questions about my marital status. The only credit I can give him is that I wasn’t wearing my wedding ring because it gave me a rash towards the end of my pregnancy. The moral of the story is that wedding rings are apparently very important to avoid awkward conversations from strangers. Hopefully Troy can at least carry that knowledge into his use of wedding ring #2.
Happy Valentine’s Day!