Skip to content
Man oh man am I glad that my mom was here was this week.

Both boys hit rock bottom. I don’t know how I would have handled them and the lack of sleep alone with Troy still in New York.

Blake was so sick with a fever, cough, and congestion that he literally never even sat up between nap time and bed time one evening. He woke up multiple times during the night and I could barely keep up with the Tylenol.

Then there was Nash. He had probably the worst week of his life. He wasn’t sick, but my sweet baby that has slept through the night since he was two months old all of a sudden started getting up twice a night. He was inconsolable, sometimes screaming his lungs out for an hour and a half. It didn’t help that I was his roomie for the week since I let my mom have my room. It’s one thing to listen to the cries from across the hall, but to be in the same room with a pillow over my head is another story. Nash is demonstrating all of the signs of teething; interrupted sleep, constant drool (resulting in a terrible rash around his mouth), pulling his ears, gnawing on everything, congestion, and overall fussiness, but there are no signs of swollen gums or tooth buds popping through. Blake didn’t get any teeth till 10 months so that is what I am expecting with Nash. I almost wish that he was teething though so that I could at least solve the mystery of his abnormal behavior during this awful week! (Sorry for being such a downer. Just keeping it real on the good ol’ blog.)

So, I had a lot of fun outings in mind for my mom and me, but due to the circumstances, we had to skip a few plans. My mom and I didn’t even work on any projects which is very unusual for our visits. I sure hope she will want to visit us again after all the uproar.

We did manage to squeeze in a few fun outings. The activities that we left the house for were worth it but they didn’t unfold quite as I had hoped. One of the boys had to give a little in order for us to be gone for more than an hour at a time. The day we went to the splash park, Blake was the one who had to sacrifice. We almost gave up on the idea completely when we were faced with windy weather, incoming storm clouds, having to eat our pre-packed picnic lunch at home while waiting for an off-schedule Nash to take a much needed nap, and not being able to arrive at the splash park until the time that Blake usually goes down for a nap. I was bound and determined to make it happen though. I’m glad we went because Blake loved splashing in the water and if we would have tried to go another day, he would have been too sick to enjoy it. 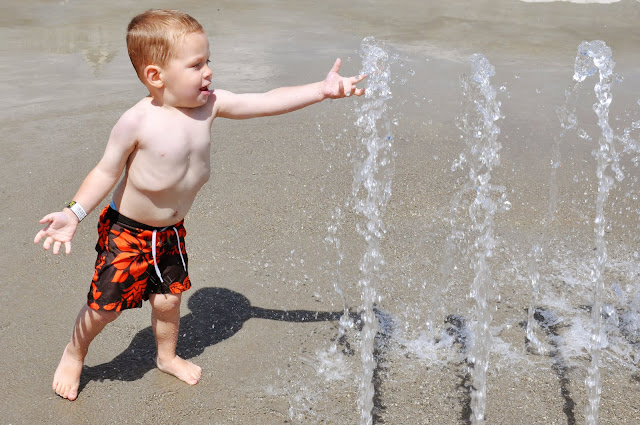 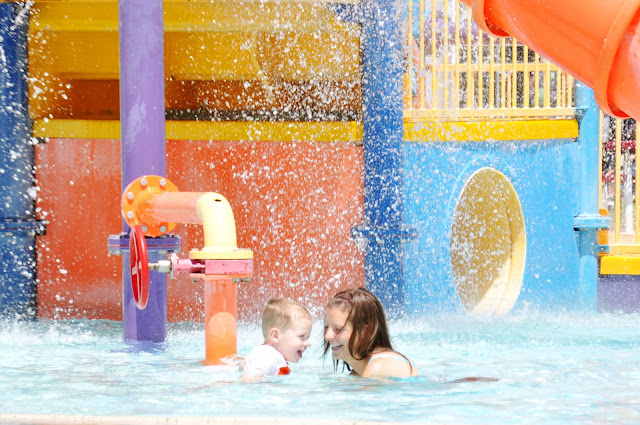 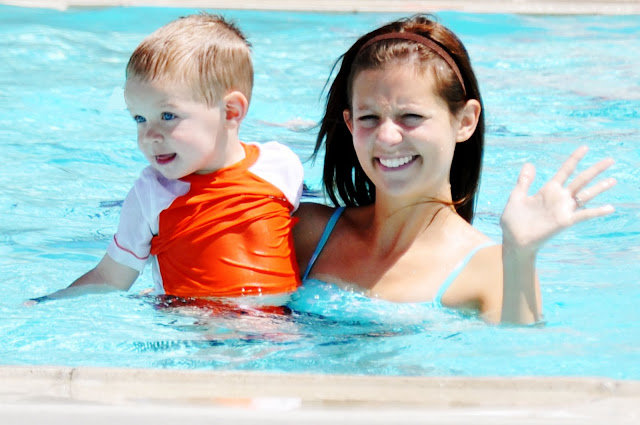 Towards the end of the week when Blake was feeling a little better, we ventured out to Liberty Park which is like the Central Park of Salt Lake City (it pales in size comparison, but is generally the same idea). This time, Nash was the one who had to sacrifice some much needed sleep. I have been wanting to take Blake to the fun little amusement park located within the grounds for a while but have been waiting for another adult to attack this adventure with me. I still haven’t quite figured out how to do some outings alone with two little ones. I thought that Blake would absolutely love it. We made the mistake, however, of letting him ride on the Ferris wheel first. He was scared to death. I don’t know if he still wasn’t feeling that great or if it was just too fast, but he was terrified from then on out. 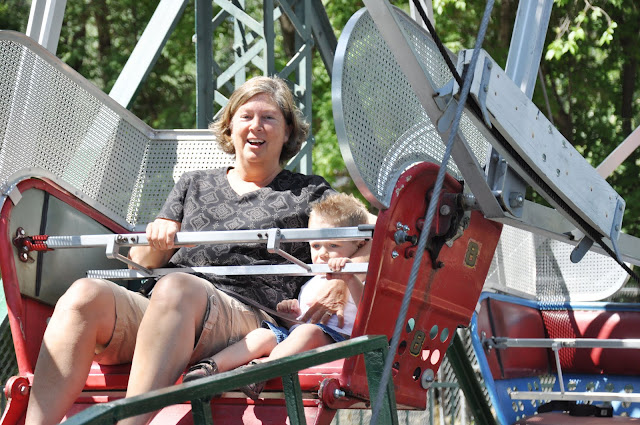 I kind of forced him (in an encouraging way) to ride on the cars and he had this perplexed expression the whole time: 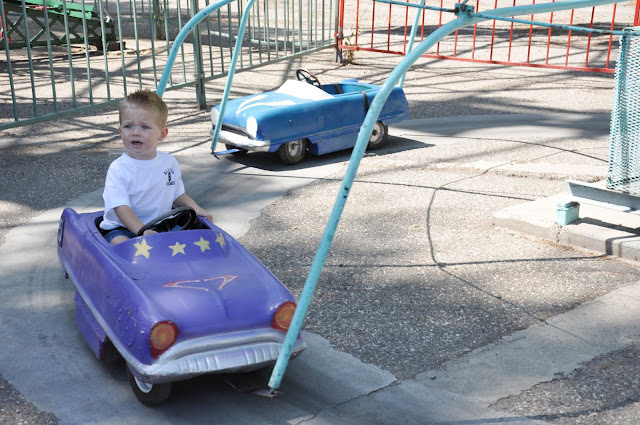 He was done at that point and wouldn’t even consider riding on the carousel despite my creative coaxing. He stood at a safe distance behind the rails with a plastered gaze watching the other children enjoy the carousel. On one hand I liked that he had an opinion and stood up for himself when he didn’t want to do something. But on the other hand, I knew he would have loved the rides and I felt like I was letting him down when I didn’t know how to help him overcome his fear. At least I got this picture that I L-O-V-E out of the situation. 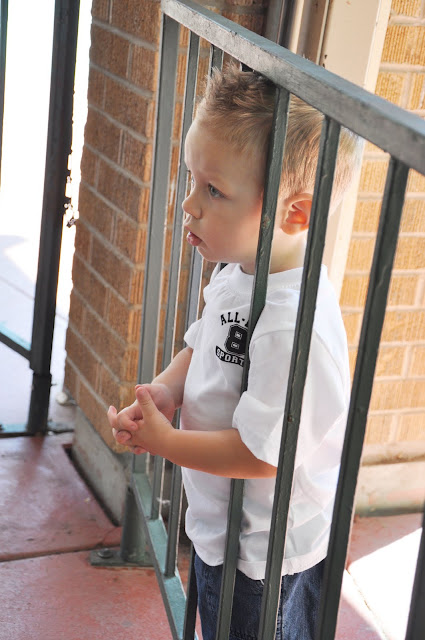 Nashy isn’t always represented at these outings that he can’t quite enjoy yet. So, here he is in his cuteness. This was the first time he “sat up” in a stroller versus riding in his carseat. I cannot believe that he is big enough to do that! 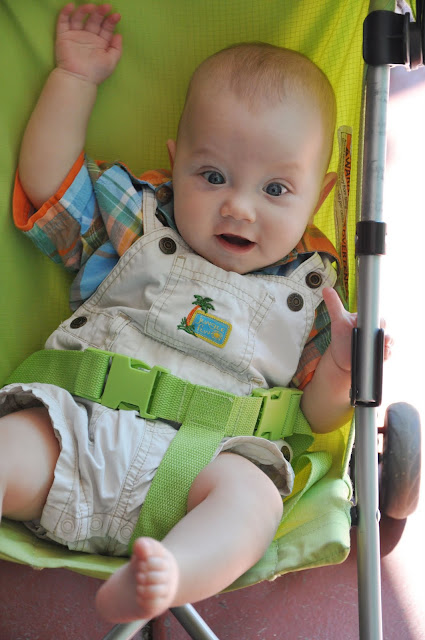 I wasn’t going to let Blake’s lack of participation hold me back from the giant swings. I may have been the only adult person over the age of 10 on the ride, but I didn’t care. I am seriously a roller coaster maniac and I love rides with high speed. I just couldn’t pass up the opportunity to fly above the ground and whip around in circles with the fresh wind blowing through my hair. 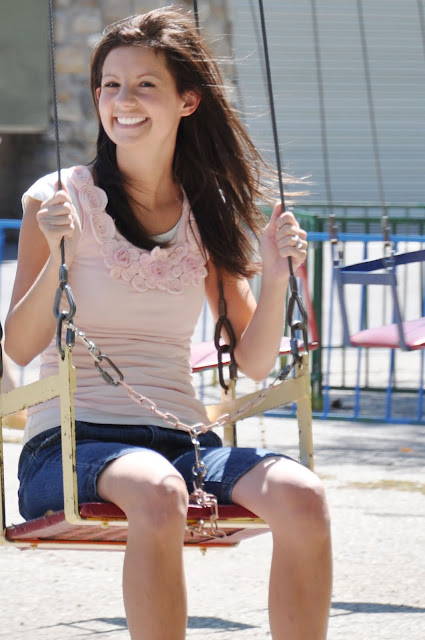 Unfortunately, the ride made me super nauseous. I had to close my eyes during the second half of the ride and I thought I was going to lose it. I’m hoping the nausea was due to my empty stomach and not because getting older is making me have a weak stomach. I get car sick like nobody’s business but I have never been affected by outdoor rides before. I have this urge now to go ride on some roller coasters to prove that I can still stomach it. 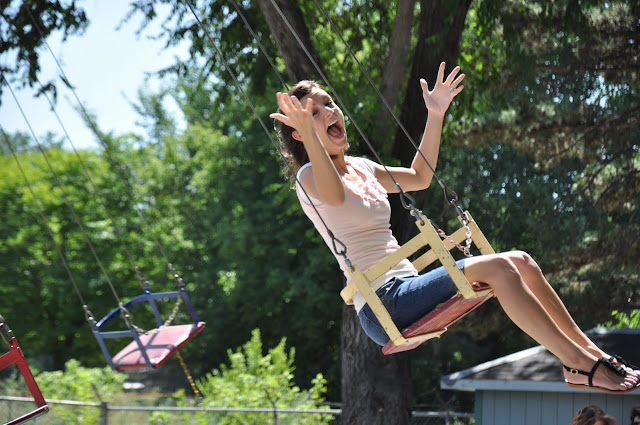 We finished our adventures (or lack thereof) at Liberty Park with a picnic and playground play. I was happy when Blake ran right to the swings and slides because I was worried that his fear of rides would transfer into play structures. 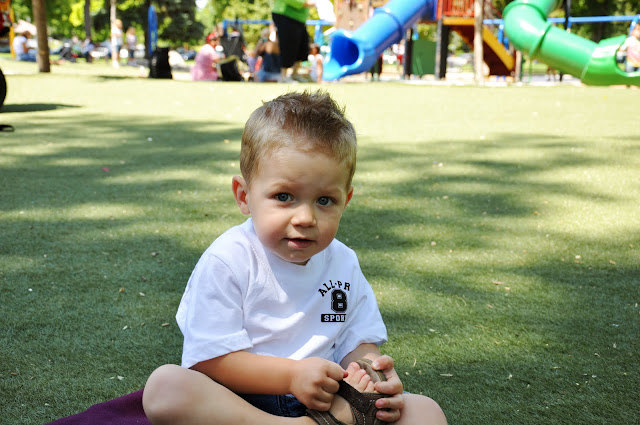 Thanks, mom, for putting up with the mayhem. I think, amidst the blur of crying, fevers, and lack of sleep, we may have had some fun?