Skip to content
I write a bunch of feelings and events on this blog, but I don’t write a whole lot of the day to day mumbo jumbo.
And when I look back, I want to remember what life was like day-to-day when I was young and carefree (ha ha) with all of my children still relatively small and hugging to my legs. I think it’ll give me comfort when they’re mouthing off to me some day. Sometimes I just don’t capture the day-to-day through my lens. So here’s my 2010 snapshot of life in words as it is right now in our family:
The first thing I do every morning is sweep Nash into bed with me, feed him, and snuggle and admire him for a while before getting Blake up.
The first thing that Blake does every morning is climb into my bed where Nash is laying and ask for “milk in mama’s room.”
Troy’s alarm clock goes off at 5:14am every morning. It is so funny to me that he sets it for 5:14, as if that one minute from 5:14 to 5:15 makes a big difference. He has always done it. He hops out of bed and never ever presses the snooze button. I never ever hear his alarm. I have been conditioned to completely sleep through it as well as the noise of the shower running.
When I give Nash a bath and he splashes water on the bathroom floor, Blake immediately runs downstairs and grabs the Swiffer Sweeper to clean up the mess. He also can’t stand crumbs under the kitchen table and has gotten pretty good at sweeping those up as well.
I eat toast with peanut butter every day for breakfast. Blake used to have sliced up bananas with peanut butter but now he is on a yogurt and cereal kick. Troy usually skips breakfast. He knows it is unhealthy but he is usually at work for 3 hours before the time he would usually eat breakfast, and at that point he just forgets.
Blake uses about 50 stalling tactics when naptime and bedtime roll around. He is becoming a master manipulator.
I try to do all of our laundry on Mondays. This usually means five or six loads, but I like to do it all in one day and then fold it in one setting while watching TV on Monday nights. I actually enjoy making neat stacks of clean, folded laundry. Folding clothes is probably my favorite “chore,” tedious as it may be.
Blake insists on the ritual of singing the baby a song when I put him down for a nap. He always requests “the love one” which is code for “I Love to See the Temple.” I sing loud enough for Blake to fill in the word at the end of each phrase. He shouts “temple, someday, spirit, pray, etc.” from wherever he is in the house.
I like to get out of the house every day. We have an hour and a half window from 11:30am to 1:00pm where both boys are awake that I try to jam pack errands and outings into.
I get up out of my chair about 12 times during every meal to obtain miscellaneous food items and utensils, refill drinks, get more napkins, adjust Nash, etc.
We rarely keep any beverages in the refrigerator except milk and water. Sometimes Troy sneaks in Dr. Pepper.
I teach two yoga classes every week but rarely find the time to go to my own yoga class. Oh how my body misses it.
Troy has spent 10 weeks in New York this year. He has spent so many nights at Embassy Suites that we are beginning to receive random gifts from them in the mail for being a frequent customer. Yesterday we received a talking BBQ oven thermometer.
I’m trying to learn how to use the manual mode setting on my dSLR camera and really understand aperture, shutter speed, ISO, etc. Some days I am better at it than others. I really appreciate good photography and I want to be better at capturing the moments.
Much to my chagrin, I do all of the grocery shopping and cooking. Troy sometimes makes breakfast on Saturday mornings, which is quite possibly one of Blake’s favorite parts of the week.
I still hate to cook. I procrastinate even thinking about dinner until 5pm rolls around. Ugh, moving on.
Nash takes 3 good naps every day and Blake sleeps for about 3 hours every afternoon. I’m still rigid about naps occurring at home. I could probably write a book based on my research of sleep training in infants and young children.
Blake watches the same 25 minutes movie almost every day after breakfast. He loves the Little People claymation movies. I don’t mind them too much even though they are a little corny and annoying. I don’t really like Blake to watch TV more than that each day. It also gives me a chance to get some things done in the morning, although 25 minutes always flies by.
We haven’t transitioned Blake out of his crib yet or started potty training. I want to keep him contained and unable to roam around his room during nap time as long as possible. I’m waiting to tackle potty training until after a few upcoming road trips where bathroom access would be scarce. We’re just in no rush for him to grow up too fast.
This is the first summer that I haven’t lived in or at least visited Michigan in my entire life. In some ways it makes me ache for home, but in other ways, it forces me to establish firmer roots here.
We still haven’t jumped on the bandwagon and gotten texting plans. However, text messages are getting harder and harder to avoid. I especially get annoyed when businesses send us text messages in lieu of calling. So unprofessional.

Blake thinks that immediate kisses on his fresh “owies” are the magic cure-all. He kisses my owies too.

We read a very short amount of scriptures as a family after dinner every night most nights. We never think that Blake is paying much attention, but we have been surprised at the details that he has been able to recall.

Blake has the most keen memory. He recalls and ties memories to events and places that were up to a year ago.

Nash can finally roll the other direction, from front to back. This eliminates so many screaming struggles from getting stuck on his tummy. I’m pretty much elated that he can now roll across an entire room.

Both of our boys suck their thumbs. Blake sucks his right thumb and Nash sucks his left.

Our sprinkler heads are constantly breaking or creating geysers. We’ve had our sprinkler valves replaced twice this summer, amidst a sea of other water pressure issues.

Troy likes to watch chick flicks with me, but during the especially mushy parts, he immediately starts checking stats and scores on espn.com.

I use writing on our blog and editing pictures as my “reward” for accomplishing other tasks. For example, at the beginning of the day, I tell myself “I can blog only after I sweep, clean the bathrooms, pay the bills, get the boys down for naps, etc.” I have to have a little bit of self control for my favorite hobby or nothing else would get done.

We don’t like macs. We know that a lot of people are hooked and think that they’re easier to use. Even amongst our immediate family. We’re still firm in our anti-mac opinions.

Troy is an avid reader. He has read well over 25 books this year, mostly in the fantasy genre. We couldn’t be more opposite when it comes to book preferences.
I hardly ever read novels. If I am reading anything, it’s “how to” books on parenting and child development. I just don’t have the stillness.

I’m still losing hair in the masses. Postnatal hair loss is much worse for me this time around. The awkward regrowth is beginning to occur along my hair line, just in time for our sister’s wedding.

We have the best sitter in the world, allowing us to go on more date nights. She is hard to book though, because she is another family’s favorite sitter too.

I am the opposite of a pack rat. I throw away anything I can because I hate clutter. I’m not very sentimental about “stuff” (except journals). Less is more. My boys probably won’t appreciate that about me when I want to throw away their endless school papers and other junk.

Troy is really good at setting up excel spreadsheets for any possible scenario. He sometimes calls me from work and has me plug in numbers or stock prices in his spreadsheets and give him the generated data.

I have this disease where I have to eat something from the chocolate category after every meal.

Curious George (stuffed animal form) sleeps on Blake’s pillow and also folds his arms and says prayers with us before bed.
If I try to skip or shorten any of the steps in Blake’s nightly routine, I can expect a total meltdown and the routine taking twice as long while Blake cools down and moves on to the next step. It takes some serious building up of energy to prepare for his rituals (and intermittent stalling) every night.

The last thing Troy and I do before we go to bed is say prayers. We used to kneel at our bedside, but after two pregnancies, we got into the habit of just holding hands laying down. Troy asked me to pray the first night of our marriage (the 3rd), so ever since then I have prayed on odd dates and he prays on the evens. That means I do more praying per year taking into account the 31sts of months. Not that I’m keeping track. 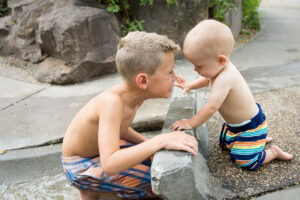