Skip to content
We took a very quick road trip to California over the weekend. We were in the state for about 24 hours, and the rest of the trip consisted of hours and hours of driving on the road. We crammed seven people including two carseats (which actually took up more room than adults) into one vehicle. We came back the worse for wear; we were all exhausted from a lack of sleep, Blake’s back was sunburned lobster red (completely my fault), both boys were confused from sleeping in strangers’ houses and a couple of hotel pit-stops, we were so sick of setting up and taking down two pack ‘n plays six different times, Blake acquired an inch long gouge across his chin from tripping on the trailer hitch, and that poor boy had never stayed up till 11:30pm in his life until this trip where he accomplished that feat three nights in a row.
Despite the condition we came home in, we actually had a wonderful time in California. All in all, the boys were spectacular travelers. Nash slept on and off in the car and even though Blake wouldn’t sleep in the car, he was entertained by watching Toy Story and Toy Story 2 a million gazillion times (undeterred by our cajoling to get him to watch something else).
A highlight of the trip was a stop at Panera Bread. We exited the freeway with plans to eat at Chili’s because we were so sick of fast food, but then I saw the illuminated bread lady with wavy hair pointing me home. Begging and pleading don’t even begin to describe the methods I used to convince Troy to go to Panera. You see, he doesn’t think that soup and salad constitute a meal. I even pulled the “we-didn’t-get-to-go-to-Michigan-this-summer-so-this-is-the-next-best-thing” card. In the end, Troy obliged. I was in heaven. Pure delicious cheddar broccoli soup heaven. Oh how I miss Panera! They need to expand to Salt Lake. 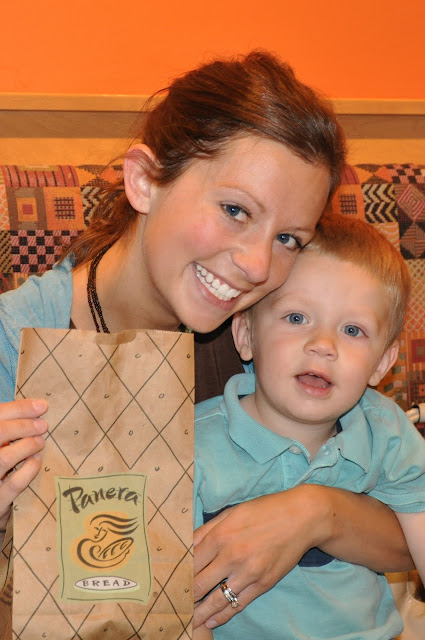 The real reason we went to California was for Jacob and Tricia’s reception. It was another excuse to get all dressed up and celebrate these two lovebirds. 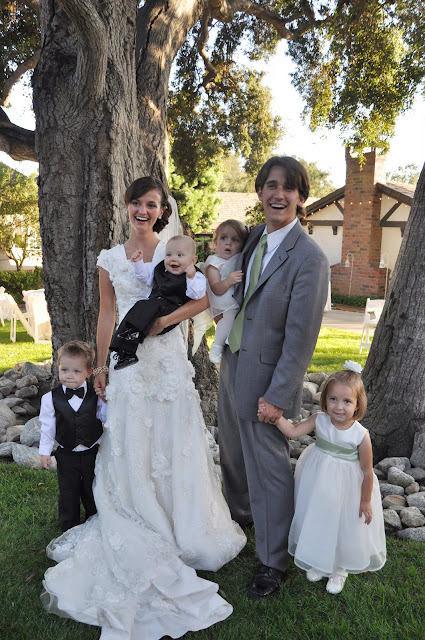 The reception was held in Jacob’s parents’ beautiful yard. And since it doesn’t rain in LA, Tricia finally got to have her outdoor reception that fell through in Salt Lake. 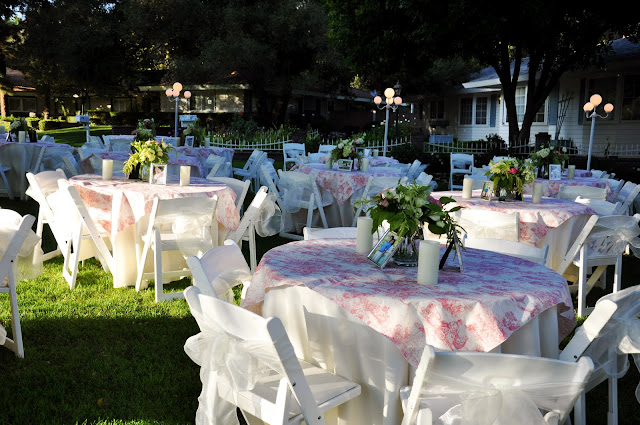 My favorite detail of this reception was the sage ribbon with chiffon flowers. I want some of that ribbon! Jacob’s mom agreed to take me to the wholesale distributor that she got the ribbon from on our next visit. 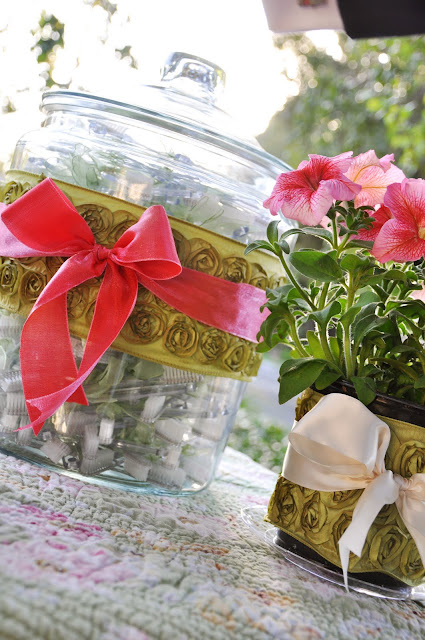 A close second favorite detail was what the ribbon jar contained. Since Jacob is heading off to dental school, their party favors were inscripted toothbrushes. Perfect. 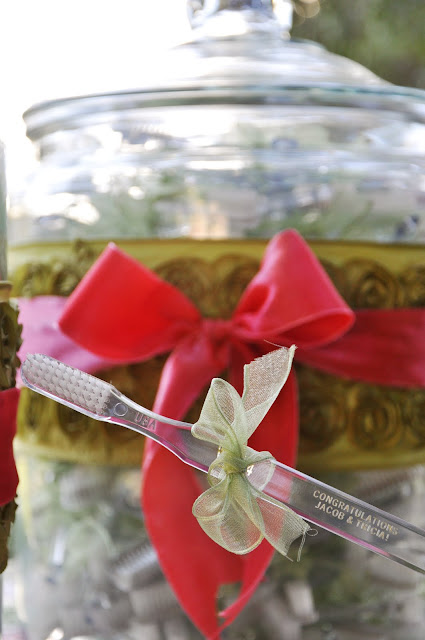 The toothbrushes were handy in entertaining our children as well. 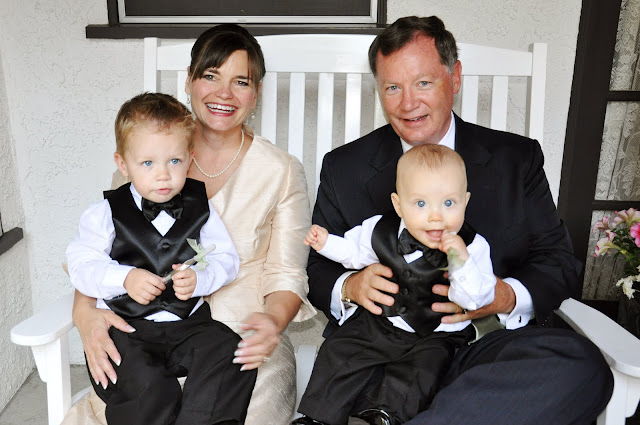 No tux rentals this time for the big boys, but the rest of the apparel looked strikingly similar to the wedding day. 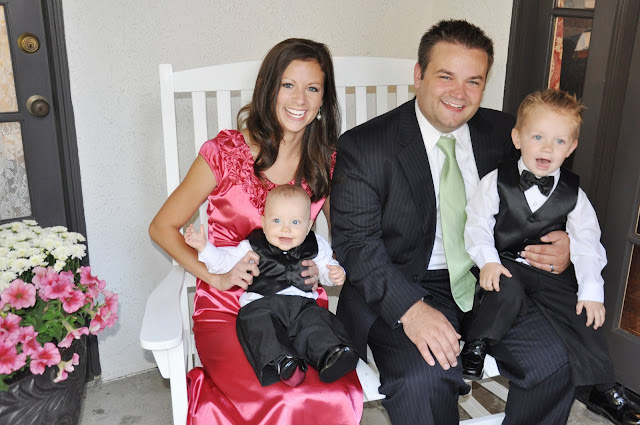 The perks of a lack of sleep: Nash crashing on me. That never ever gets old. 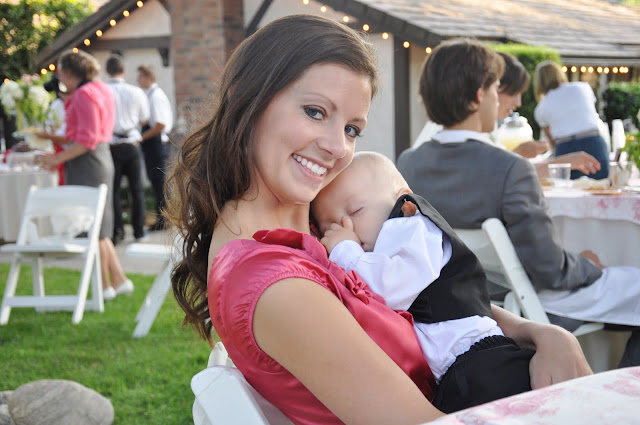 Blake fell in love with the tire swing they had in their yard. 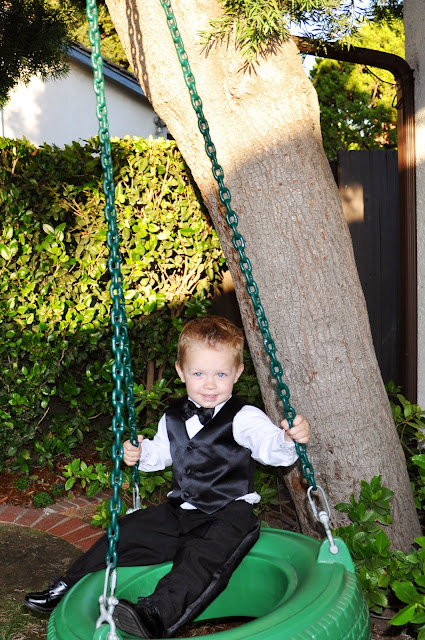 He fell even more in love with the flower girl, Lilly. He grabbed her hands and placed them around his neck and held onto her waist while dancing. I really don’t know where he learned that from. His parents told me later about a full-on lips kiss he planted on her as well. He’s such a ladies man! 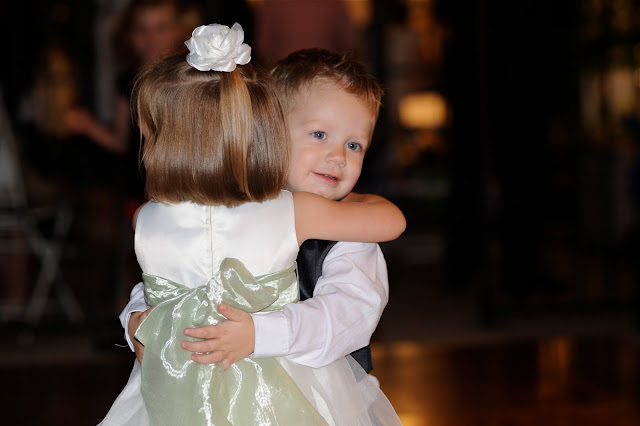 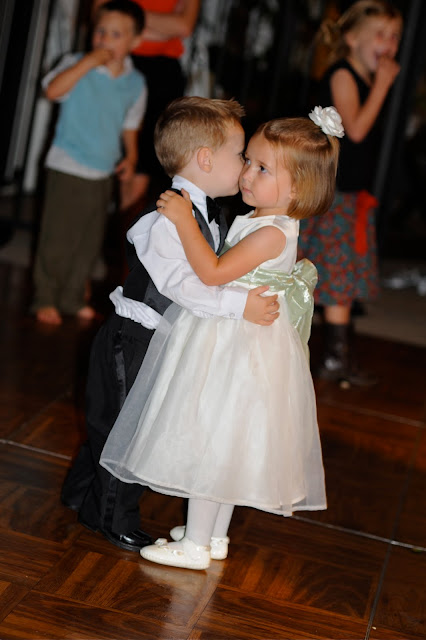 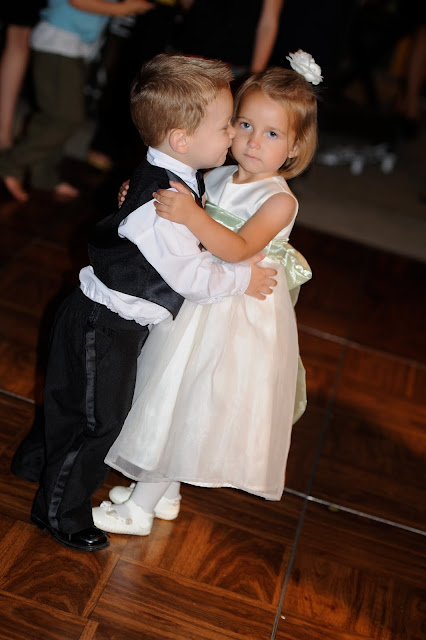 The most hilarious moment of the entire evening was when Lilly’s cousin tried to gain back what he thought was his territory. He got right up in Blake’s face trying to steal Lilly away. But Blake was bold and held onto his girl. I was proud. Usually he would shy away in a situation like that. I guess that is just proof of Blake’s affection for pretty girls. All of the onlooking adults were in hysterics watching this scene unfold. 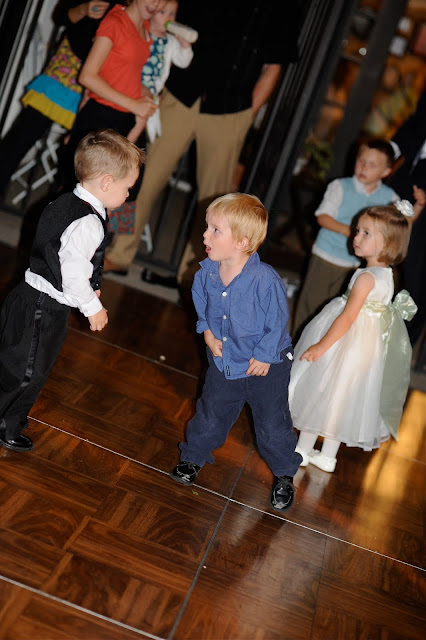 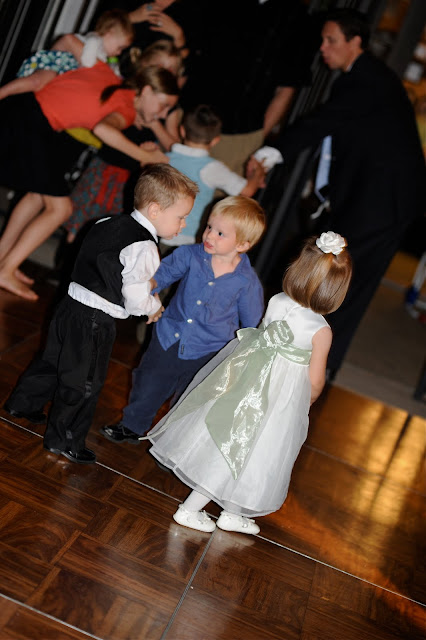 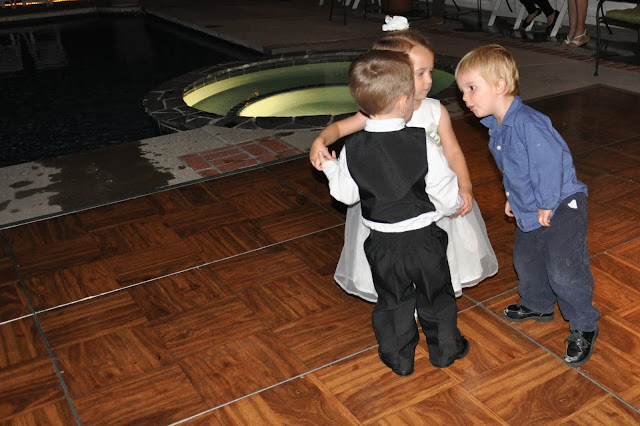 Tricia told me the next day that the act of Blake and Lilly dancing like adults and the cousin trying to cut in was the highlight of the entire reception for her. 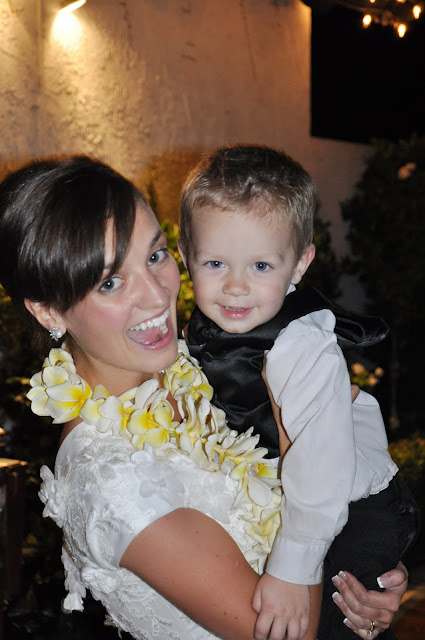 One of my best friends from Michigan, Kristen, came to the reception as well since she lives in Cali now. I miss her so much! 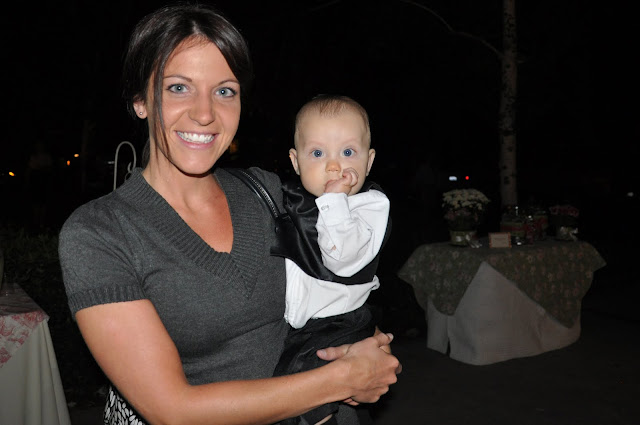 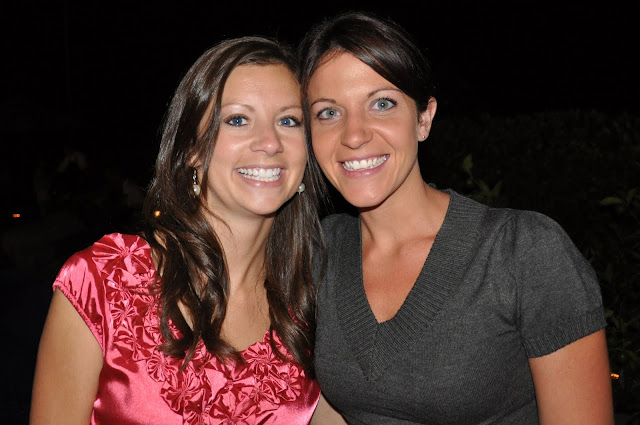 The next morning, Nash got up really early and I couldn’t resist taking him on a sunrise walk in the mountains. I didn’t even bother changing him out of his pj’s; I just had to catch those views. 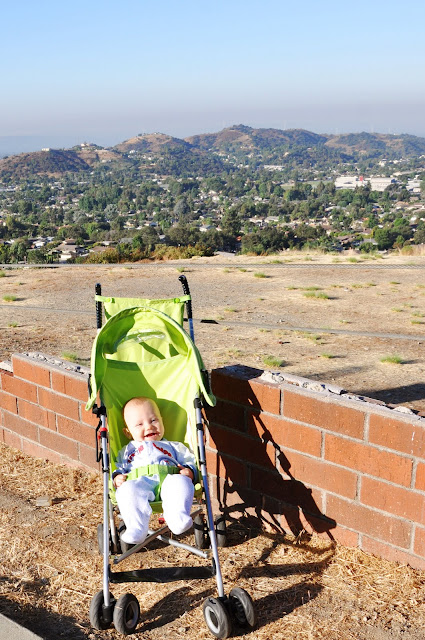 We stayed at Troy’s Aunt and Uncle Whitworth’s beautiful home. The pool and jacuzzi water were really cold so Blake just dipped his toes in (this was the point where he got the lobster red sunburn). 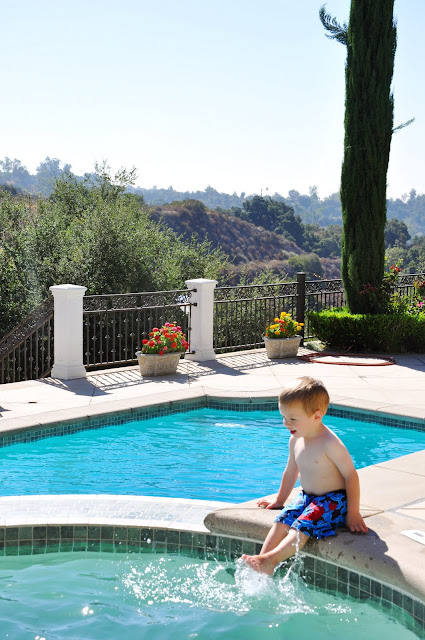 Instead of braving the water himself, Blake utilized his Uncle Todd as his personal ball gopher. He stood lazily at the top, throwing his ball into the pool and waiting for it to be retrieved. 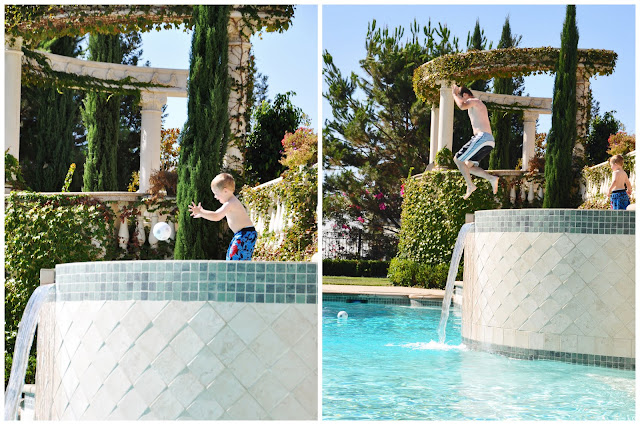 We also took advantage of the trampoline in their yard. 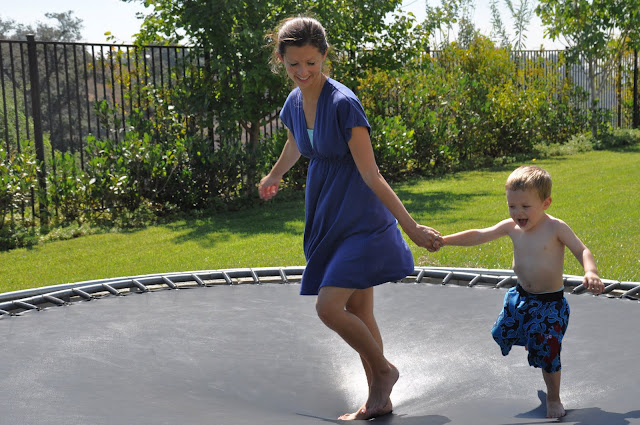 It has been about six years since I’ve done a back tuck so I’m glad that I didn’t break any bones while attempting to deny my age. Man it was fun to fly around. I think I’ll add a trampoline to my wish list along with that awesome ribbon. 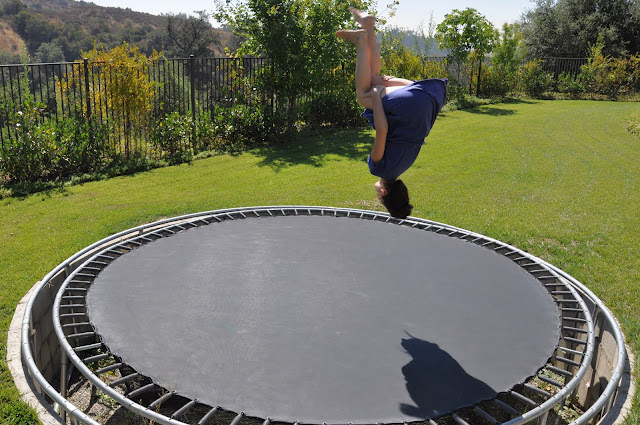 Our final activity in our 24-hour California excursion was a wedding gift unwrapping party for the bride and groom. We had a lot of laughs and it was really fun to get to know Jacob’s family better. 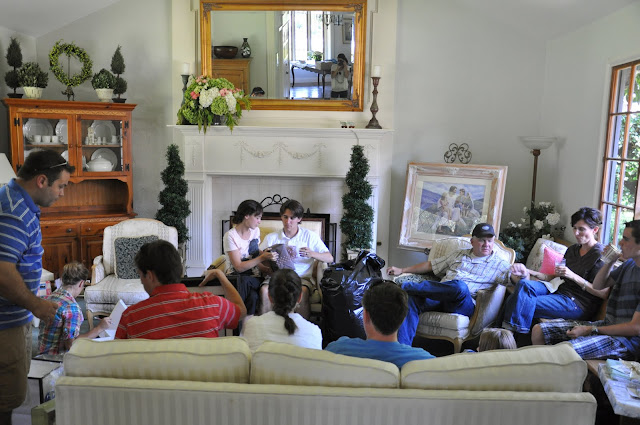 We bid thee farewell, California. See you next month when we stay for more than a day.