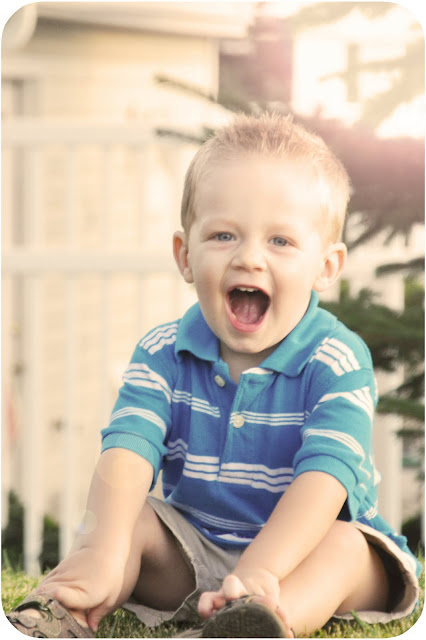 I love this boy. He says the funniest things. I want to remember these moments of innocence and curiosity when he is talking back to me someday.
Troy’s mom compiled a book of Troyisms throughout his childhood and we have so much fun going back and reading the things he came up with as a child. Following her example, I started a record of Blakeisms (and eventually I’ll have Nashisms too). At first I just sent an ongoing email to myself featuring funny phrases Blake said. Then I decided it would be easier to create a blog that I could frequently update. That way the dates would be in tact and I wouldn’t have a thousand emails to myself by the time he was 18. I kept the blog private because the details of my child’s life aren’t near as interesting to anyone else but myself (and the grandmas), but I thought I would share a few of the hilarious things that Blake has said recently.
We have been at the hospital and doctor’s office a lot lately. While waiting for the doctor to examine Nash at his surgery follow-up, Blake pointed at the empty stool on wheels and stated, “This one’s for Dr. Pepper!” I believe he transferred his knowledge of his dad’s favorite beverage to the other type of doctor.

We taught Blake about our prophet, President Monson, during Family Home Evening a few months ago. Over General Conference weekend we asked Blake what the prophet’s name was. He thought about it really hard and finally replied, “President Muffin!”

While eating dinner, Blake turned to his dad and asked, “Babe, may I have some more chicken please?”
When Grandma Julie was visiting, she took Blake to story time at the library. When he arrived back at home, he burst through the door and exclaimed, “I JUST had fun!”
Blake loves to play with money and his piggy bank in the bath tub. He sticks the coins all over his chest using water as the adherent. One day while examining a penny, he pointed to the imprint of Abraham Lincoln and exclaimed, “It’s Jesus!”
After the Relief Society sisters performed the song “As Sisters in Zion” at church, Blake stood up on the bench and frankly announced at the top of his lungs, “Good Job!”
Blake often refers to his brother as “it.” Pronouns are tricky. He tells me, “It’s awake,” or “It’s asleep,” or “It’s sad.” While relaxing on the hammock one summer evening, Blake decided that he wanted to sit in my lap instead of Nash being there. He fiercely exclaimed, “Mama, PUT IT IN THE GRASS!”