Skip to content
Speaking of worries, Nash’s heart issues were brought back to the surface after a few months of rest. We spent a downright awful day at the hospital for him to have another sedated echo. They had a really hard time getting an IV started in him, and after four painful pokes and many scrutinizing search attempts, they called in the “expert” IV team.
We waited close to an hour for the expert, and in the meantime Nash cried himself to sleep out of shear exhaustion. They wrapped heating packs around his ankles in hopes of finding a place to start an IV. But alas, the expert didn’t have much luck starting an IV either because Nash was so dehydrated. What do they expect though when he isn’t allowed to eat anything for six hours prior to the sedation? Of course he was dehydrated!
So he was starving and exhausted when they woke him up to put an IV in the only accessible vein they could find…in his HEAD! Poor guy. He went through some serious trauma until he was finally knocked out in sedation.
Oh, and did I mention that I had a terrible case of the stomach flu that progressively got worse throughout the day? My dad was a saint to come with me to the hospital for hours and hours because there is no way I could have done it alone. Every time I stood up to sway Nash and calm him down I thought I was going to lose it. My dad got him right to sleep and stepped in to help at every possible opportunity. 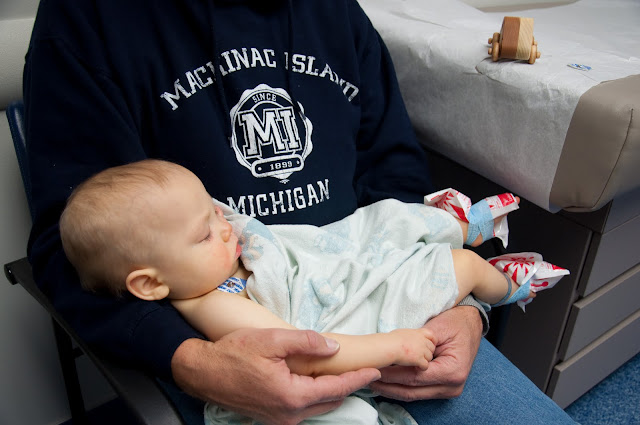 In the end, after the whole ordeal, the echo seemed pretty pointless to me. They found the same PDA that Nash had four months ago, and he still has to have surgery to close it up.
Only a new worry was brought to the surface as well. Because of an increased blood flow to his left ventricle, our cardiologist is worried that there could be some bone marrow in his aorta. If that is the case, Nash will have to have an incision in his chest to remove the marrow. That is a much more complicated surgery than having the catheter in his leg to repair the PDA. But there is no way to find out if there is marrow until he is already sedated in the Cath Lab for the proposed surgery. So we are really hoping and praying that his aorta is clear and he doesn’t have to go through a more complicated surgery.
Having that IV in his head isn’t something I really wanted to capture and remember, but my mom snapped a picture of Nash in his healing bandage after I immediately passed out upon arriving home. 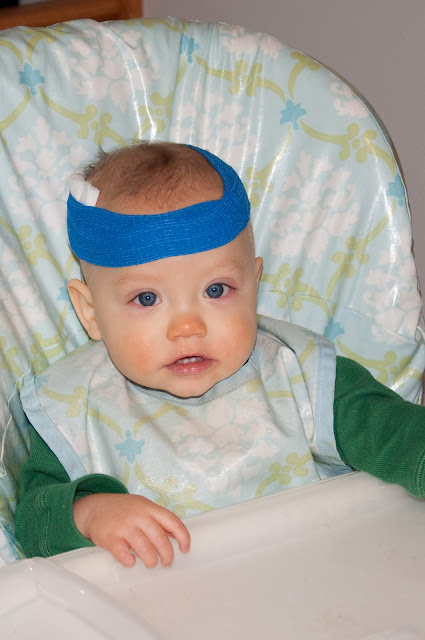 And what would a trip to the hospital be if Blake didn’t impose some sort of injury on himself around the same time as well? These things always seem to come in twos for us. (Remember his staples after Nash’s first surgery?)
This time, Blake fell off the rocking chair and hit the wood corner, creating a nice gouge and shiner by his eye. Thankfully he didn’t need stitches, but he’ll probably have a nice little scar to show for it. 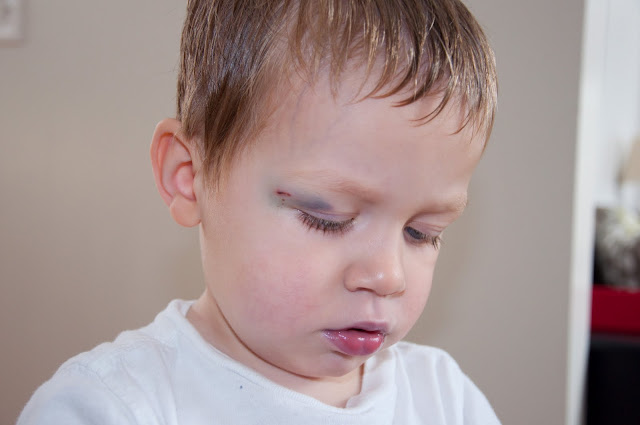 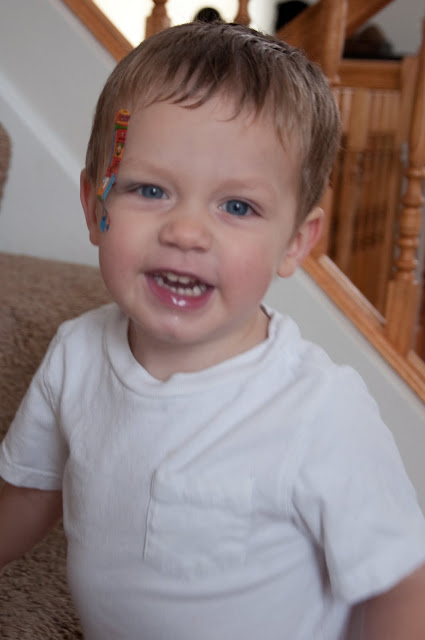