Here is the rundown of our Easter festivities:

The boys awoke to the traditional string tied onto their doorknobs. The Easter Bunny left a string for each of them to follow all over the house that led them to their Easter baskets.

Nash has an obsession with Maisy books and was delighted to find a few new ones in his basket.

The Easter Bunny was even kind to the adults.

Somehow he knew that my mom would love some yellow shoes, and he even got her the right size.

In between eating enormous meals, we went to church (which was lovely by the way) and tried to attempt a few photos before the boys ripped their ties off.

This is the reality of how photo ops usually turns out:

My brother and his brand new fiancée joined us.

We e-met our first nephew and cousin.

The boys were ready to get on with the egg hunt.

Blake thought some of the hiding places were especially funny.

So funny that he let his little brother in on the discoveries before snatching the eggs up himself.

The “grown-ups” participated as well.

He loosened up when a few dollar bills were found.

Sorting out the contents is always the best part.

But not even candy could compete with the attention of Uncle Todd.

Our boys sure adore him.

We had one more surprise for Blake after all of the festivities.
With his birthday being so close to Christmas, we decided to hold off on his birthday gift until spring.
He was elated to find a “big” bike waiting for him, and was so grateful to me for “making” it. We made it clear that his gift was from us and not the Easter Bunny, and this sort of thing wouldn’t happen every year.

It didn’t take long for him to turn his bike upside down and make it into a machine.

Nashy was pretty excited about inheriting Blake’s tricycle, even though his legs didn’t quite reach the pedals.

We feel blessed to have spent Easter with our out of town family, and for the opportunity to reflect on the Resurrection, one of the most beautifully amazing things we celebrate. We hope that our boys recognize that Easter is something larger than the baskets they wouldn’t let out of their sights. 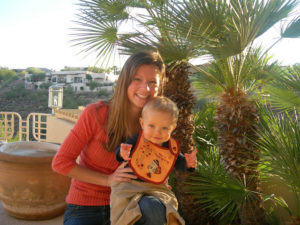 And They Lived Nashly Ever After