Skip to content
I was taking pictures today simultaneously with my phone and my nice camera. My sister-in-law asked me why I was alternating. I told her it was because the pictures from my phone could be posted on Instagram in “real time,” whereas the pictures from my camera most likely wouldn’t be uploaded and edited and described for another month. That seems to be my rate this summer.
I don’t love to use the camera on my phone because I can’t stand the quality compared to my nice camera. I’m afraid I’ll shoot a photo that I absolutely love and then I’ll be bummed with the quality. So, if at all possible, I use the big camera. But, since I’ve been getting more and more behind on my photos, I’ve been loving the convenience of Instagram. It makes it so much easier to keep up with happenings in real time.
Life has sped ahead so quickly this summer that it has been impossible for me to keep up with documentation. I’ve been trying to finish up recording our Europe trip before I forget all the details, but, in return, I am so behind on everything else that has gone down since we’ve been home.
Believe it or not, we were actually home for three weeks in July (mostly). And we plowed through as much as we could from our summer bucket list.
Here’s what we’ve been up to in the last little while, according to my phone:
Back in May, we celebrated Mother’s Day with sick kiddos, as per usual. I’ve learned that Mother’s Day does not mean mom’s day off.

We’ve had our share of sprinkler issues, also as per usual. Hard work means that Troy falls asleep with his Kindle in his hand every single night. Or sometimes it drops to the floor before I get upstairs and put it aside.

We discovered that Blake sits exactly like I do. Proper or not? It’s still up for debate.

We took an evening jaunt around the Great Salt Lake. There happened to be a solar eclipse. I caught it in the reflection.

We spent Memorial Day at the cabin with friends. We were hoping to go boating. But when it snows at the end of May, the hot tub it is. We threw in about 30 rubber ducks for the kids to play with.

Then it was off to Arizona. We stumbled across rows and row of tires on the drive down. The boys were greeted with gift bags courtesy of Grandma. Blake lived in the pool.

After getting the boys settled at their grandparents’ house, Troy and I met up and started our long voyage to Europe. I loved watching the old fashioned airport terminal sign in the Frankfurt airport as we passed through Germany.

We spent two weeks in Italy, Greece, Turkey, Romania and Ukraine. We had the best time, but we were so happy to come back to the USA. We missed the boys like crazy.

We made it back in the nick of time to go to Taylorsville Dayzz; the most anticipated carnival of the summer. I couldn’t convince Blake to go on the Ferris Wheel. Apparently he only rides on carts that have fully enclosed cages. He waited down below while Nash and I went round and round.

A few days after returning home, we took off to San Diego for my brother’s wedding (which I will eventually get to posting about). It was Nashy’s first “over two” flight, which meant that he was a ticketed passenger. He examined the safety rules to no end.

Blake “decorated” me with centerpiece jewels at my brother’s reception. We were only in California for 48 hours, but we managed to fit in a trip to the beach, of course.

I’m convinced that San Diego is the perfect city. And there’s something about flying in the sky that lures me in to taking pictures.

We made it home just in time to celebrate the 4th of July. On the night before the 4th, I had a heater on the bed at the cabin because it was too far away on the floor. It doesn’t matter the season; I’m always freezing. The next morning, we woke up to a moose in the backyard.

We made lots of trips to different parks to try to hit our summer goal of 30 parks.

The boys came downstairs one morning full of pride that they put on matching slippers. And of course, summer rain = puddle jumping.

We still let Nash go to the neighborhood nighttime swim party after his naughty day of prying off keyboard keys. How could we say no to that face? It was the first time that he overcame his fear of water this summer.

Troy and his brother both came in their favorite cuff links to our cousin’s wedding. They were made from Boston subway tokens. We went and saw Wicked that evening. I don’t know what rock we’ve been living under, but it was our first time.

And then we were off again to Colorado for a good friend’s wedding. We spotted a rainbow as we racked up the miles on another road trip.

And now here we are in Michigan as the summer winds down already. Blake has been perfecting his sand angels. We’ve visited beaches all over the state, including a trip to Petoskey with extended family and then on to Mackinac Island.

And no trip to Michigan would be complete without cribbage tournaments on the beach and frequent visits to Fricano’s pizza – the best on earth.

If it weren’t for the other 11 months of the year, I could totally move back here. 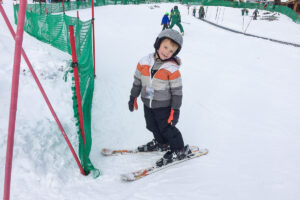 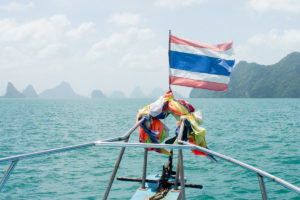 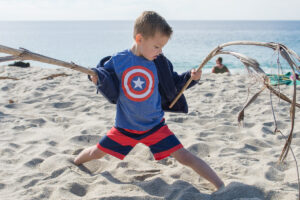 Ringing in the New