I’m officially at the half-way point today. 20 weeks down, 20 to go. Although it feels like I have about 50 weeks under my belt at this point.

To celebrate, I thought I’d share 20 of my “tips and tricks” to endure a deep and abiding stomach flu that lasts for three to four months straight. This is also known as morning sickness, or, in my case, all-day sickness.

I was willing to try pretty much anything when most days I didn’t know if I could endure another hour. I even researched if it would be safe to be put into a coma while pregnant. But since that didn’t prove to be a viable option, I had to resort to other ways of coping.

Nothing I tried was a magical solution. I mostly just had to suffer through it. And some days one thing took the egde off and the next day it didn’t work at all. But even though I wanted to lie in the fetal position every second in between my frequent trips to the porcelain bowl, I still had two children to take care of and cart around to various places.

So, to all of my pregnant sisters out there who are lying in bed near a bowl or toilet, here are some tips and tricks that I’ve discovered over the years that may give you 5 minutes of relief until the next bout hits. 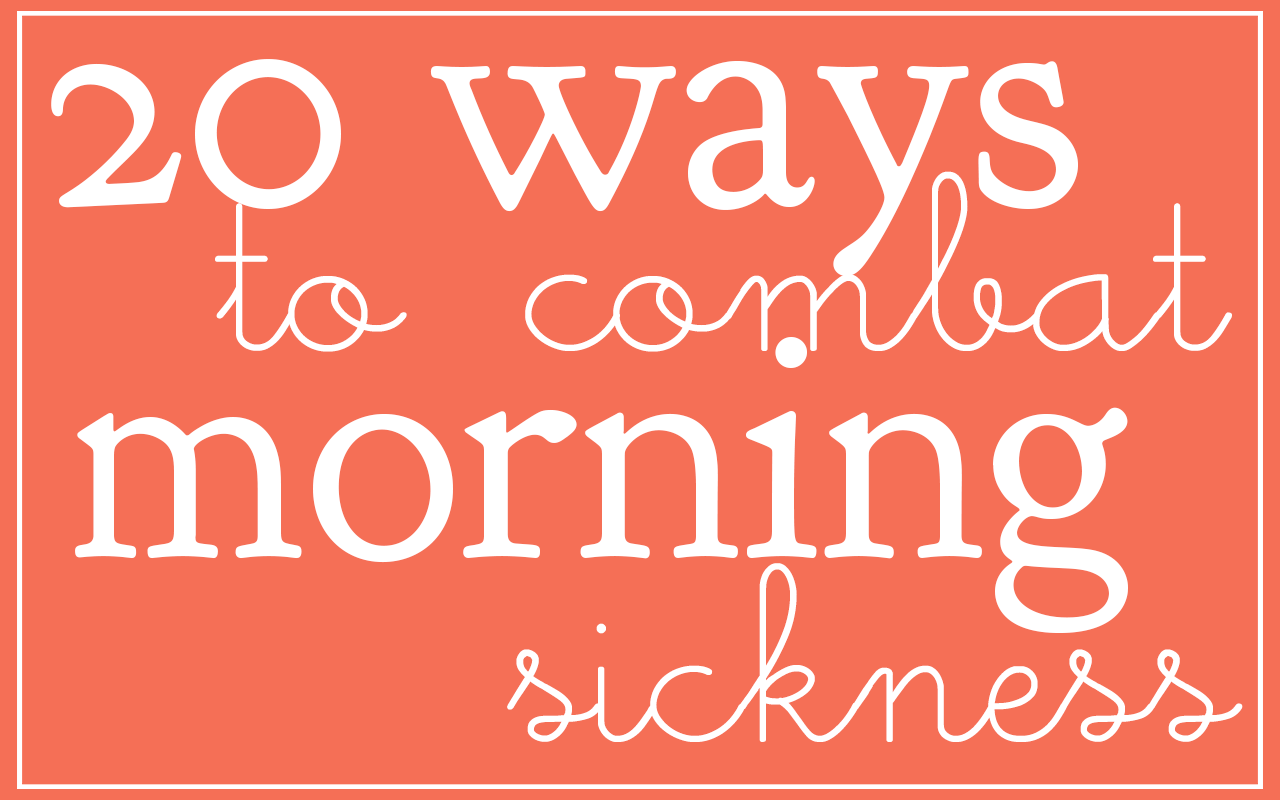 1. Doctor prescribed meds. Some women swear by these, but I didn’t find anything to be a “cure.” Zofran maybe made me throw up less, but I still felt like I was about to puke my guts out 24/7, which was sometimes worse. Phenergan made me so deliriously sleepy that I couldn’t function, and Reglen gave me crazy side effects. At 10 weeks I started having contractions and intestinal cramping because my body completely rejected it.

2. Vitamin B6 and ½ Unisom tablet. Again, this combo didn’t prove to do much for me, but I know it works miracles for others. But beware, it might make you sleepy.

3. Sobe Lifewater. Using the B-vitamin logic, I stocked up on Sobe drinks that contained vitamin B. Sometimes they were soothing and I liked drinking something other than plain water, but once I threw them up a few times they weren’t ever really the same. I think I still have a few bottles left in our outside fridge.

4. Fountain soda and limeades. I’m not a natural soda drinker. But a fizzy fountain Sprite always helped a little. Even if my two year old is now addicted after sneaking so many sips of my drinks. I also got hooked on Sonic’s limeades. There is a Sonic close to the boys’ school that I frequented.

5. String cheese. In those moments where I had to grab to eat something immediately, I usually went for string cheese. I bought the nicer varieties – Sargento cheddar and jack to switch things up a bit. I could only live on pretzels and crackers for so long. I still grab string cheese in the evenings when the nausea hits and at this point it’s usually (not always) enough to tide me over till bedtime.

6. Avoid things that will not feel good coming back up. I get into a different eating mentality when I’m pregnant. With everything I consume, I consider how bad the repercussions will be when the contents come back up. Salad and spicy food are the worst in my opinion. I once had someone tell me that every time she felt nauseous while she was pregnant, she ate an apple and it made her feel great. Obviously she hadn’t thrown up apples 4 times in one day. Just sayin’ – think before you eat.

7. While we’re at it, avoid talking to anyone who was nauseous for one day and/or threw up once or twice during their pregnancies, and thinks they “know what you’re going through.” It just makes you want to punch them in the face.

8. Airplane barf bags. I’ve tried out a variety of barf receptacles, and airplane bags are the best. They fold up enough to put several in your purse, they are thick and hole-free, and they usually have a sealing flap to keep the contents contained until you can find a trash can. We have a good friend that travels a lot and he brought me a huge stack.

9. Plug your nose. I learned the best trick with this pregnancy. Since I get the most sick in the evenings, the up-chuck contents stay in my sinuses all night long and make it impossible to breathe. I wake up multiple times during those nights and have to re-wet the roof of my mouth because it feels like sandpaper. But I learned that if you plug your nose while you are throwing up, it helps the food bits not get stuck in your sinuses. Let me tell you, I’m really good at holding my hair with one hand and plugging my nose with the other.

10. Popsicles. Cold and soothing, even if they don’t do much nutritionally.

11. Lemon drops. For about four weeks straight, I popped lemon drops almost constantly to help with the nausea. And then of course I got incredibly sick of that taste being in my mouth. I don’t know if I’ll ever be able to suck on a lemon drop again, but I swear it helped.

12. Ginger. Some people say ginger helps. Gingerale never did much for me, and if you’ve ever tasted raw candied ginger even when you’re not pregnant – you might as well start running towards the bathroom.

13. Peppermint oil. I tried rubbing this on my feet and belly a few times. I’m not really one for oils but I guess the smell is supposed to be relieving.

14. Gummy vitamins. I cannot for the life of me get those horse prenatal vitamins down, so I go for the chewable gummy ones when I’m pregnant. I get the One-a-Day adult or women’s multivitamins, which taste like fruit snacks. They basically have all of the same vitamins as prenatal pills.

15. Sea-sickness wristbands. I wore these religiously for a while thinking they might be helping. Of course it was still 90°+ at that point so they looked awesome with my short sleeves. In that same vein, motion sickness ear patches. I had a few leftover from our cruise, but they made my already heaving mouth so dry that I ripped them off after one day.

16. Mints. Spearmint gum, starlight mints, Altoids, anything that will distract you momentarily.

17. You are in charge. I learned with baby #3 that I could tell my doctor/midwive no. You know those mandatory first trimester blood draws? I said no. I’m pretty sure my blood type hasn’t changed and I haven’t contracted an STD since my last pregnancy. And the pap? Just say no. I was so nauseous that thinking of doing anything other than checking for the heartbeat at those first few appointments put me over the edge. So, I stuck up for myself. Apparently I can’t avoid that 28 week gestational diabetes test though.

…and I just took an intermittent break to go throw up. I guess the half way point isn’t looking that optimistic after all. Lately, it just springs on me. I know, TMI.

18. Take naps and go to bed early. This one was hard for me because I feel like naps are such a waste of time. Usually, I go go go all day long. But sleep was the one and only relief, so I tried to take advantage whenever I could (as much as was possible with two small children).

19. Have great friends and a great husband. It is important to accept offers to help when you really need it, as hard as that may be. I don’t know what I would have done without friends who brought us meals and took our boys some afternoons. Or a husband who put up with my constant hormonal emotions and did the grocery shopping. And even stood over me with tissues and sanitizing wipes each time I lost it. It doesn’t get much more glamorous than that.

20. Find distractions. Even though I wanted to curl up and not leave the house, doing nothing for three months straight would have made me go crazy. I never felt up to it, but I still went to book club and playgroups and church and other outings. The time passed so slowly that any distraction I could find to fill the time was worth the effort. As long as I had my airplane barf bags close at hand. I’ve felt so thankful for my job the last few months as well. Since I couldn’t just sleep all day long, my design work kept my mind distracted even though my body felt terrible. Designing websites on my laptop while laying on the couch filled the time and helped me feel like I was still accomplishing something.

One more: Perspective. Without warning, pregnancy took over my life. And it should (well, if you’re lucky, not the sickness part) for anyone who is growing a human being. Even though it seems like it will never end, I have two growing children that prove that it does indeed end. As hard as it is to endure, do the best you can to remember that it won’t last forever. You’ll have your body back again. You’ll reestablish your normal routines and hobbies. You’ll set new goals when you feel better. For now, give yourself a break and do what you need to do to survive, one day at a time. This too shall pass. I promise.