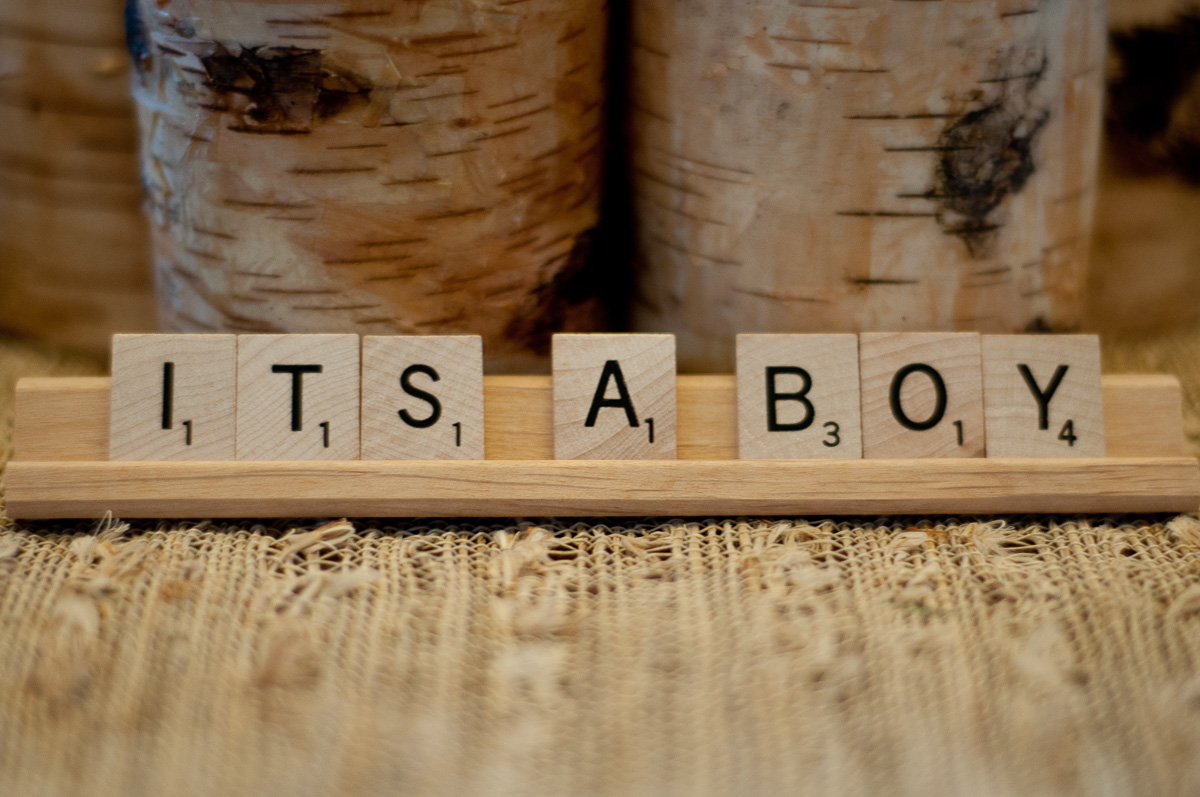 It was confirmed for a second time today.

It’s no secret that I was aching for a baby girl this time around. I have dreamed of having my own daughter since I was a little girl myself. Everyone that I know recognizes how deep that desire goes for me.

I’ve debated over and over about posting something so deep and personal. But I like to keep it real. I don’t ever want to put on the pretense that we have a picture perfect life. And it’s getting harder to hide my emotions behind happy pictures. It just all seems fake when I’ve cried and cried and cried myself to dehydration.

I have always wanted the opportunity to have a girl. And it’s not just about the bows and dresses and dance classes (although I’m dying for those too). I don’t just want a girl, I want a daughter. There is a special bond that comes with mothers and daughters that isn’t the same with sons. I want to know that at least one child will want to talk with me when she gets older or come see me when she’s grown and be my shopping and crafting partner and family get-together co-planner.

This is an ultra sensitive topic, because I’m very aware of those that are unable to have children or have lost children and must think I’m so selfish and ungrateful for the blessings I’ve received. There are so many who would give anything just to have a baby – and a healthy one at that – let alone worry about whether it’s a boy or a girl.

So let me clarify that I am grateful, incredibly grateful. I would not swap out any of my boys for a girl. But I can’t deny that not a day goes by that I don’t long and yearn for a daughter.

When the ultrasound tech announced that it was a third boy (which was unnecessary since I can identify boy parts in my sleep), I didn’t cry at first. I mean it’s not this sweet, innocent new spirit’s fault. And I will love him just as much as I absolutely adore our other two boys.

But what sent me into hysterics was the realization that I’m probably never going to have a girl.

I daydreamed about how the ultrasound would go a thousand times in my head. I imagined the tears of joy that would stream out when the ultrasound tech revealed, “It’s a girl!” I literally sensed the overwhelming emotions I would feel as I replayed the scenario over and over in my mind. And how it would be the happiest day of my life. I even had the “gender reveal” all planned out.

Each time I’ve learned that my boys are boys, it has gotten more painful for me. And it has nothing to do with them. With Blake, I was excited to give Troy his boy. And in the back of my mind, I thought, “Okay, well the next one will be a girl.” With Nash, I cried a little. Two boys under our belt with no girl on the horizon was scary. But, I was still happy that Blake would have a brother and best friend, and I knew we weren’t done having babies yet, so I was okay with it. And obviously I can’t imagine my life without the sweet boys who fill me with so much joy.

But I was terrified to have a third child. And now that the boy factor is confirmed, the light seems very dim, even impossible, for the possibility of ever having a girl. I feel like I’ve lost my last shot.

I’ve actually known for about a month and have been trying the best I can to deal with the reality. I’ve told very few people because it’s just as awkward for others to respond as it is for me to relive the news over and over.

Two of my best friends came with me to the initial ultrasound. They have been my absolute rock throughout all of this. Not only have they brought us meals and taken care of me physically, but they sobbed right along with me at the ultrasound. And they continue to cry with me whenever I need support.

Every day of facing the reality is hard. What started out as mostly physical suffering has now taken full emotional effect on me. And reliving the ultrasound for a second time today was just as emotional as the first time. For some foolish reason I still had a glimmer of hope within me that a girl would be revealed.

Little things set me off each day that are mostly selfish; folding baskets of laundry and realizing I’ll soon be adding more boy jeans and hand-me-downs to those baskets instead of girl clothes, knowing that I won’t get to have the baby shower I’ve dreamed of after hosting so many for others, walking through any children’s clothing store and bypassing the “off-limits” side that I’ve wanted to shop in for years, wondering what to do with my bin of girl paraphernalia that I’ve saved over the years, and wanting to remove every single baby girl nursery idea that I’ve pinned and collected.

I feel broken. Like I’m just not capable of making baby girls (even though technically it’s my husband’s fault :). I cry because I am so disappointed and then I cry because I feel guilty for being disappointed. I’m sad that this arrival isn’t going to be exciting for any of the grandparents because they already have a plethora of grandsons. I feel heartbroken for Blake, who desperately wants a baby sister. How do I explain to him that this was meant to be and it will be wonderful when I can barely accept that reality myself?

I know that everything happens for a reason and this boy is meant to come to our family, yada yada yada, but that doesn’t ease the void I feel for my missing girl.

In some ways, I am grieving the loss of my girl, even though she never really existed. It was hard for me to be excited about the pregnancy from the beginning because I’ve been so so sick every hour of every day for four months straight. But the only thing that got me though the hardest times was the hope of my little girl and that all of the pain and suffering would somehow be worth it.

Now it feels like the girl that I imagined and dreamed about my entire life is gone. I really thought she was coming this time. It had to be a girl, right? I was so much sicker, the baby was “timed” to be a girl, and I had a handful of other personal experiences that confirmed my prediction. I was 120% certain. I barely entertained the possibility of the baby being a boy. And now I’m falling especially hard because I’m mourning the loss of someone I never had to begin with.

People seem very curious if we will try again.

The answer is we don’t know. Going for a fourth and having another boy terrifies me. And that does not mean we don’t love the boys we have. We love them with a fierceness that only parents can understand. And we do not wish any of them were a girl.

Technically, we haven’t scheduled any irreversible procedures. Troy and I both just thought this was the end of our child-bearing era. Three children felt right. After this one, womb closed. Out of business. Finis. But now there are some question marks.

We’ve felt judgment for not jumping on board and immediately planning for the next one. No one understands the depth of how hard pregnancy is for me (and my entire family), and how each time it has gotten profoundly worse. To the point of barely functioning. Physically, I really don’t know if I can ever do it again. And making the decision to have a fourth child now, when I’m at my worst, is unfair and impossible. I still have a long way to go with this pregnancy.

Though I know everyone I talk to means well, most of the time, I don’t want to be comforted. I don’t want to hear “You make such beautiful boys” (I’ve never questioned that), “Think of all the daughters-in-law you will have someday!” (Not the same at all), “But you’ll have grand daughters” (Can I dress them everyday and French braid their hair and enroll them in dance?), “You’ll completely forget what it was like being sick and be able to have another one” (I do NOT forget. I remember vividly how sick I was with Nash, and I don’t think the memories from this one will ever fade). I don’t want to hear about other ultrasound experiences where the mom “just knew” what she was having and she was right. I “knew” too. Being told that my intuition was wrong is hard to swallow. And I really don’t want to hear about those instances where the ultrasound revealing a boy ended up being wrong.

I’m sure that at our third son’s birth I won’t feel anything vaguely resembling disappointment. Just because I wasn’t instantly thrilled about this boy doesn’t mean that I don’t want him or I’ll love him any less. And so far, he looks healthy, and a healthy baby is a miracle in and of itself. He is our son and I know I will love everything about him. We have the means to support him. He will have two older brothers to look up to. We know we are blessed beyond measure. And on the bright side, we’ll have a lot less PMS in our household.

I also don’t think I’ll ever stop longing for a daughter. No matter how much I love my sons, no matter how wonderful they are, no matter how grateful I am for happy, healthy children, no matter that I would not swap them for all the daughters in the world, or even one, it won’t take away the wanting of a baby girl.

Though I’m feeling sadness over a broken dream, I know that grieving is the only way to reach acceptance. There is no shortcut, no way around. And when I eventually make my way to acceptance, it will be a good, good place to be.