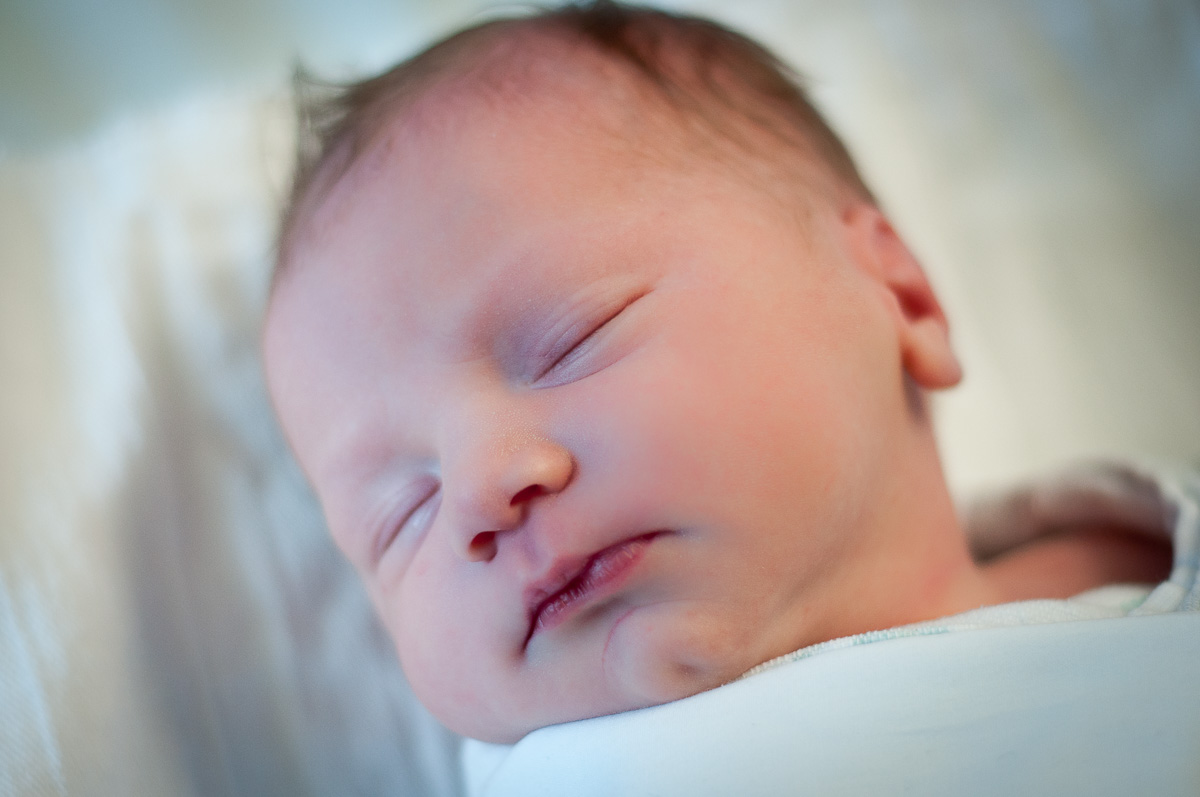 I started having contractions around noon on Monday, April 15th. I had just left playgroup with Nash and we were on our way to pick up Blake from school. I timed the contractions at five minutes apart. By the time we got home, they were painful enough that I wasn’t sure if I should be driving.

I immediately called Troy to have him come home from work. Since Nash was born three hours after my first contraction and within the hour of arriving at the hospital, we didn’t want to kid around this time. I lined up a place for the boys to go until one of their uncles could take over, gave instructions to the painter who arrived at our house right at that moment, and gathered our pre-packed hospital bags (a definite improvement from last time when I was on my hands and knees packing in between contractions).

I was still breathing fairly easily through the contractions when we dropped off the boys, but we decided to play it safe and head to the hospital.

We checked in around 2pm and the waiting began. My contractions narrowed to three minutes apart, but I stayed dilated at 4cm for several hours. We settled in, watched the Boston marathon bombing footage, walked a few laps around labor and delivery, and I downed several cups of ice chips. The contractions intensified to the point where Troy had to apply pressure on my knees each time to counteract the pain, but I still wasn’t making much progress.

My midwife agreed that I was in labor and didn’t want to send me home, so she decided to break my water around 7pm to get things moving. Since I was planning on getting an epidural, we decided to get that in place before breaking my water.

And that’s when the real fun began. I don’t do well with needles. And by “don’t do well”, I mean I have a serious phobia where I panic, hyperventilate, scream, and make every doctor and nurse within 500 feet have their own panic attack.

Neither the IV nor the epidural went well. My pillow was soaked with tears, Troy’s arm was numb from my squeezing, my voice was hoarse from screaming, and the nurse and anesthesiologist were exasperated.

Somehow, I made it through. Once everything was in place, I got nice and numb from the epidural. My midwife broke my water and I progressed from 5cm to 10cm within 20 minutes. I pushed through four contractions (that I couldn’t feel of course) and Crew was born at 8:17pm. 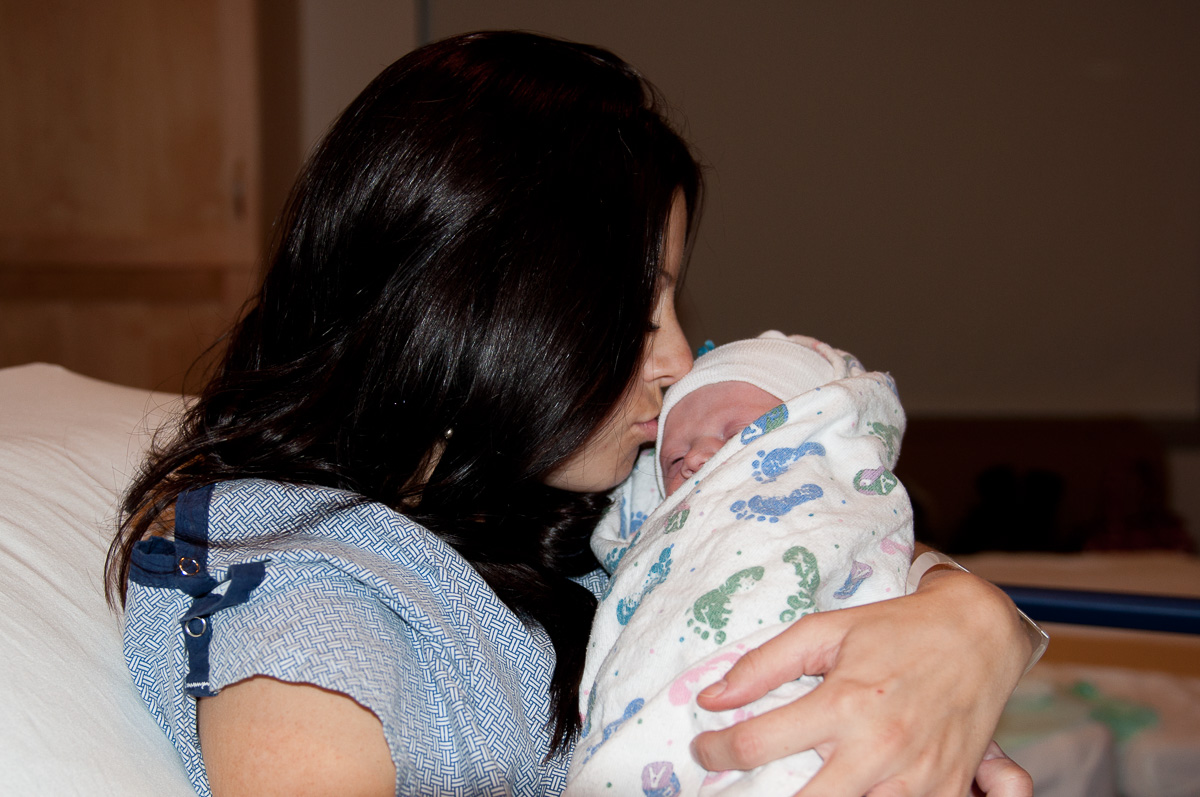 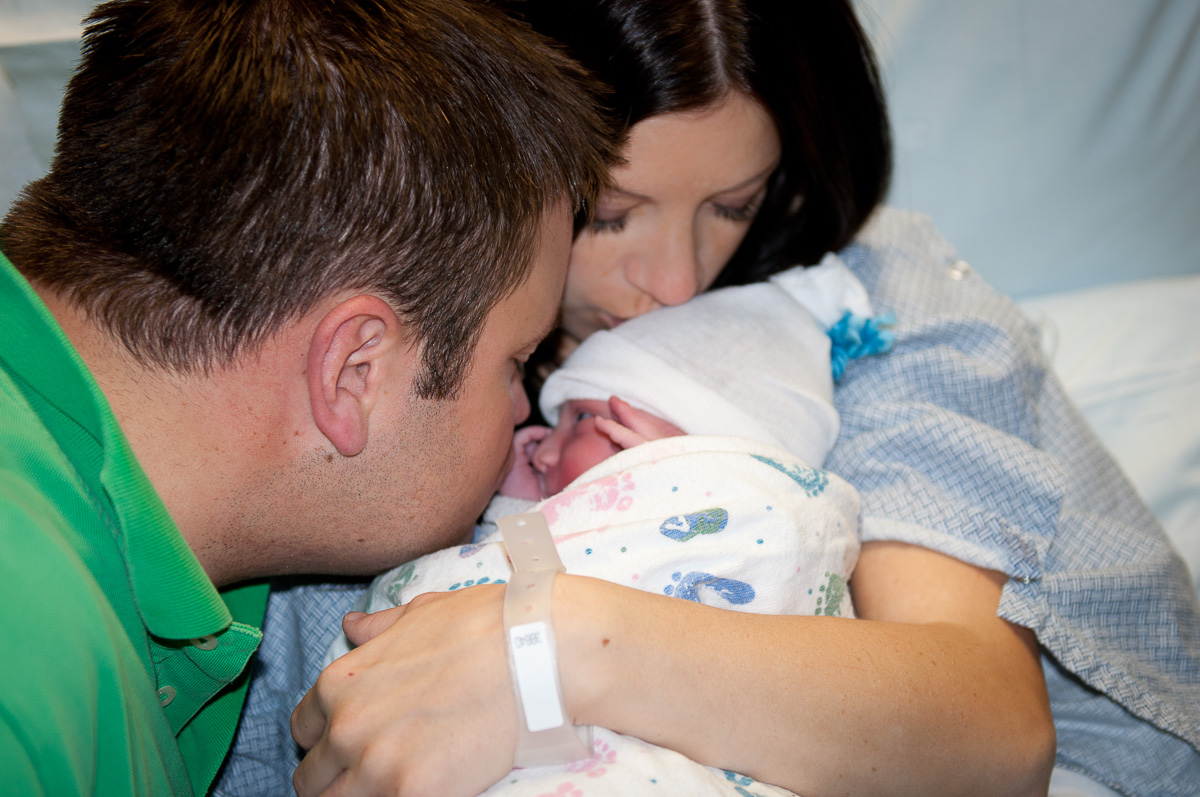 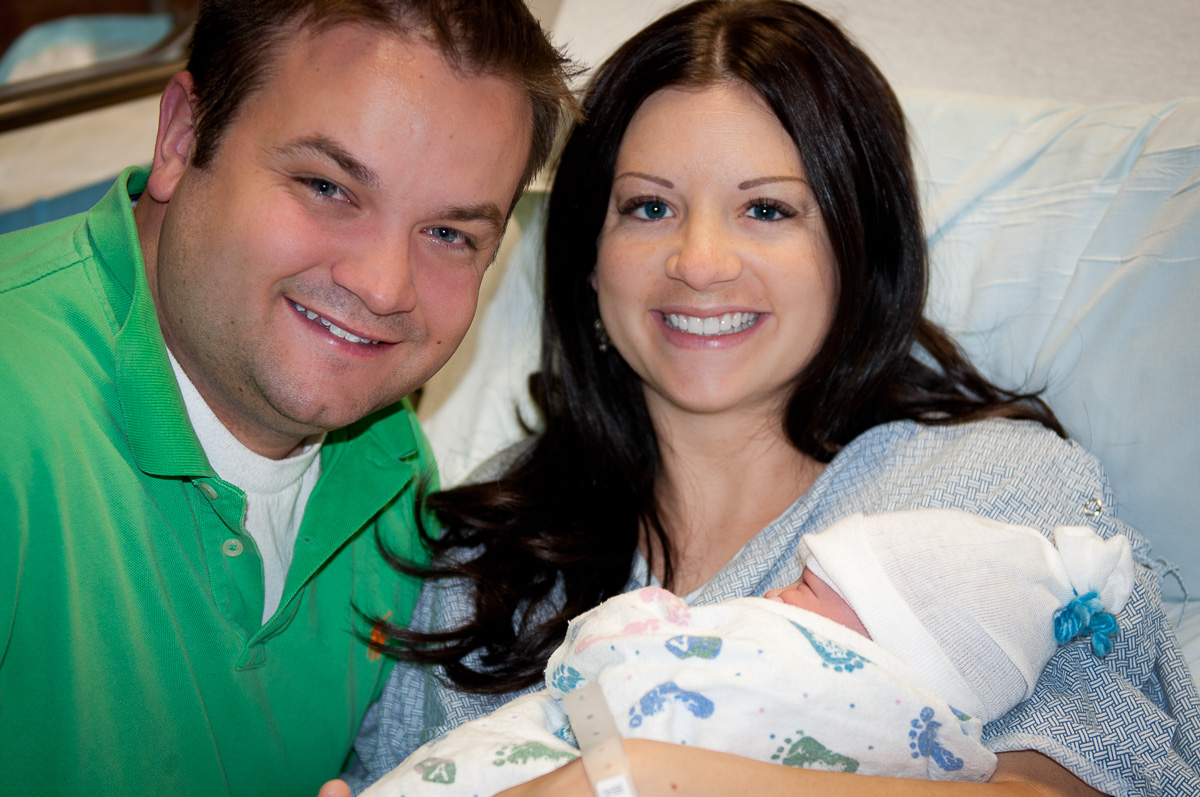 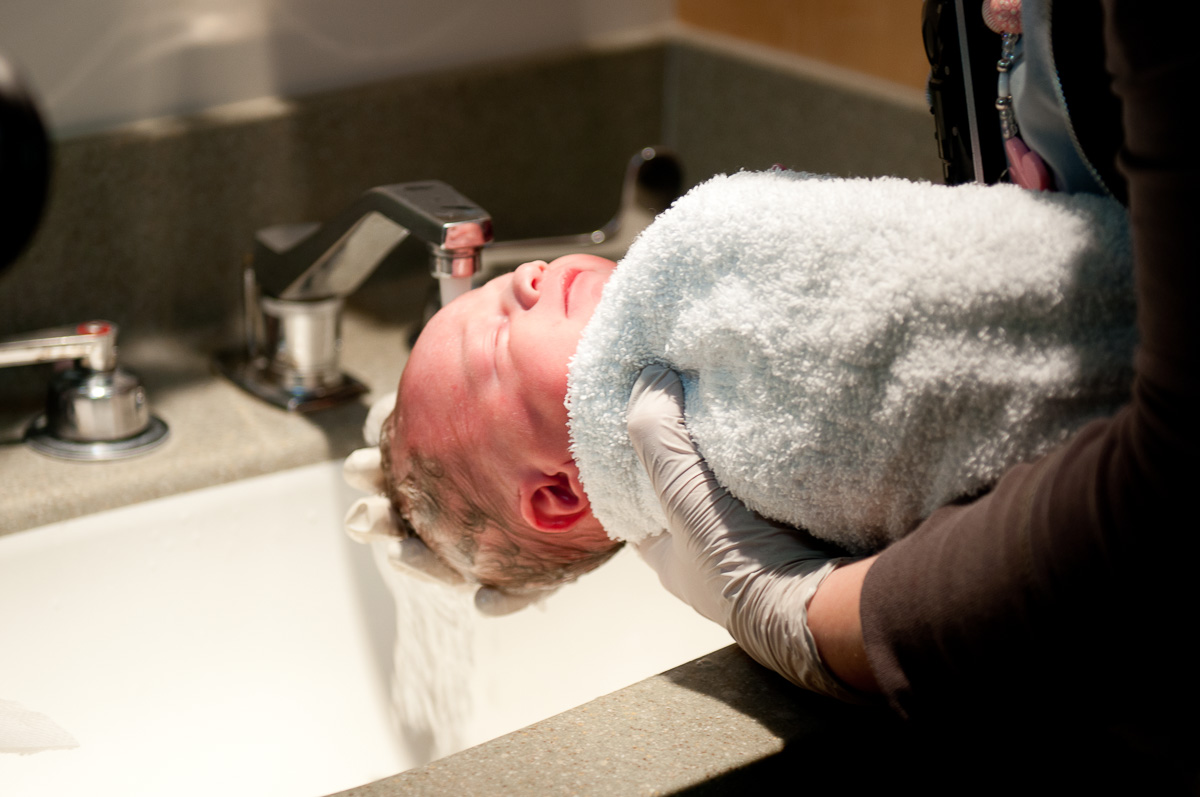 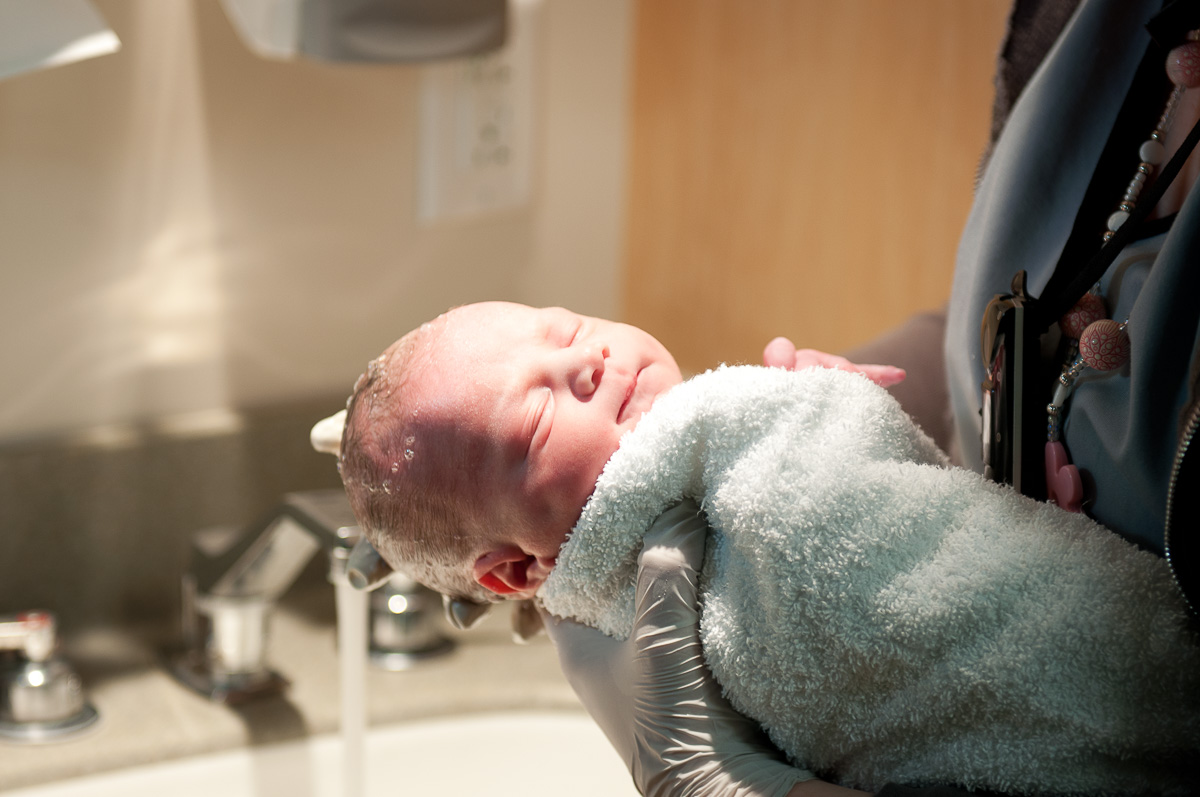 But the birth story didn’t end there.

After I held and fed Crew for the first time, the anesthesiologist came back to inform me that some spinal fluid had leaked during the epidural. And my chance of getting a massive spinal headache as a result was 70 percent. Since my IV and epidural were still in place, he performed a blood patch in hopes of preventing the spinal headache. He drew blood from the IV in my arm and placed it in my back to form a clot around the fluid leakage. I had to lay flat on my back for an hour after the procedure to ensure its effectiveness.
I made it through the first night and the next morning without any sign of a headache. The boys came to meet their baby brother and doted on his cuteness. 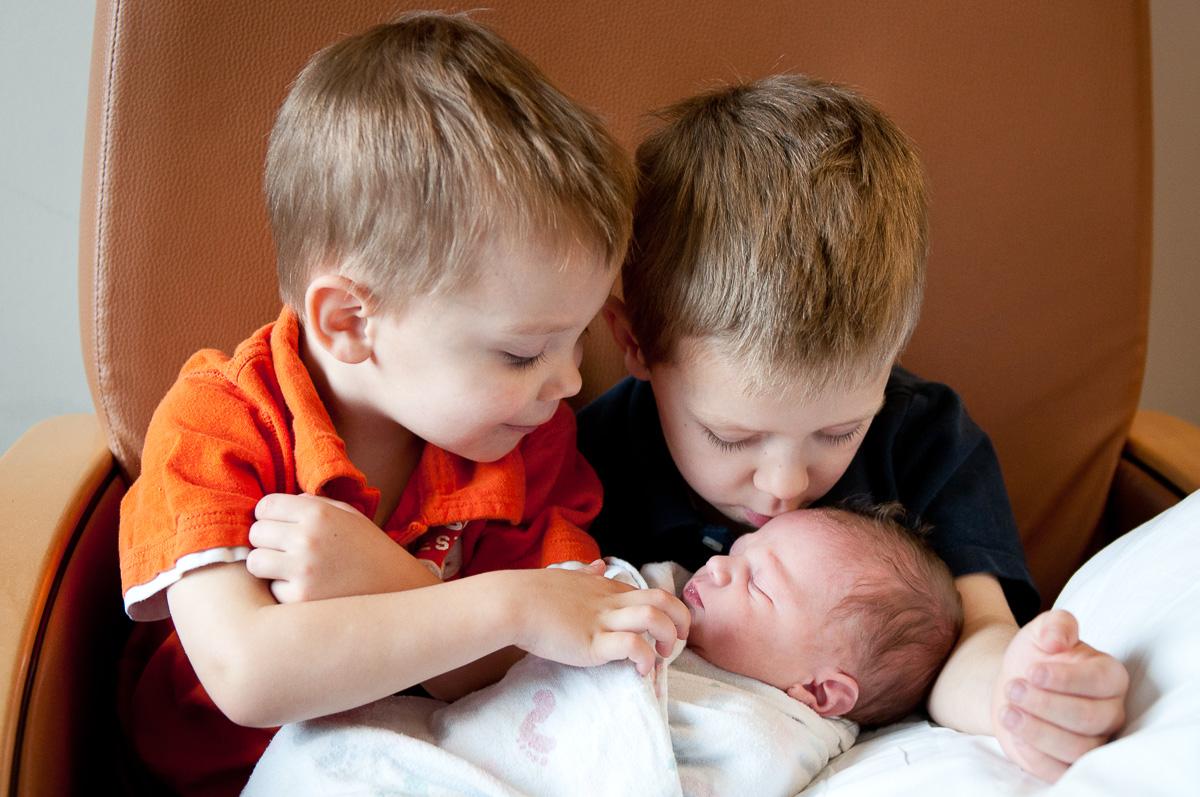 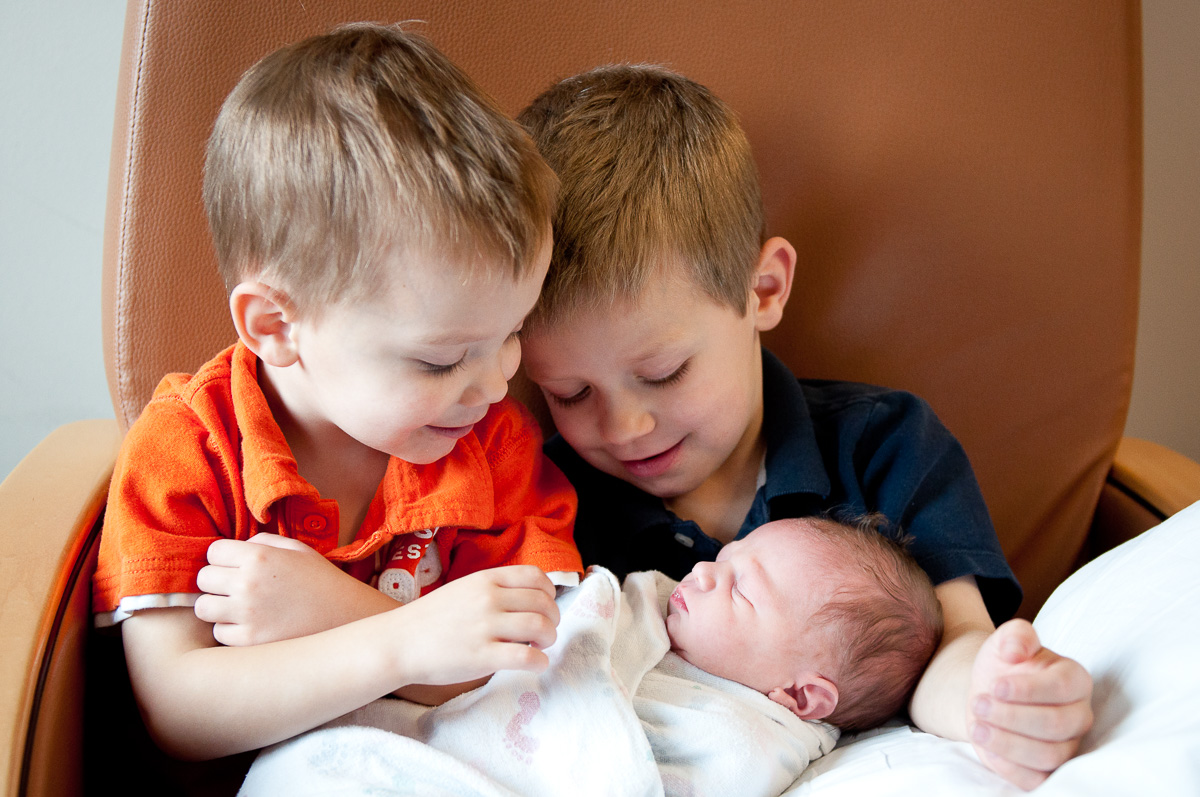 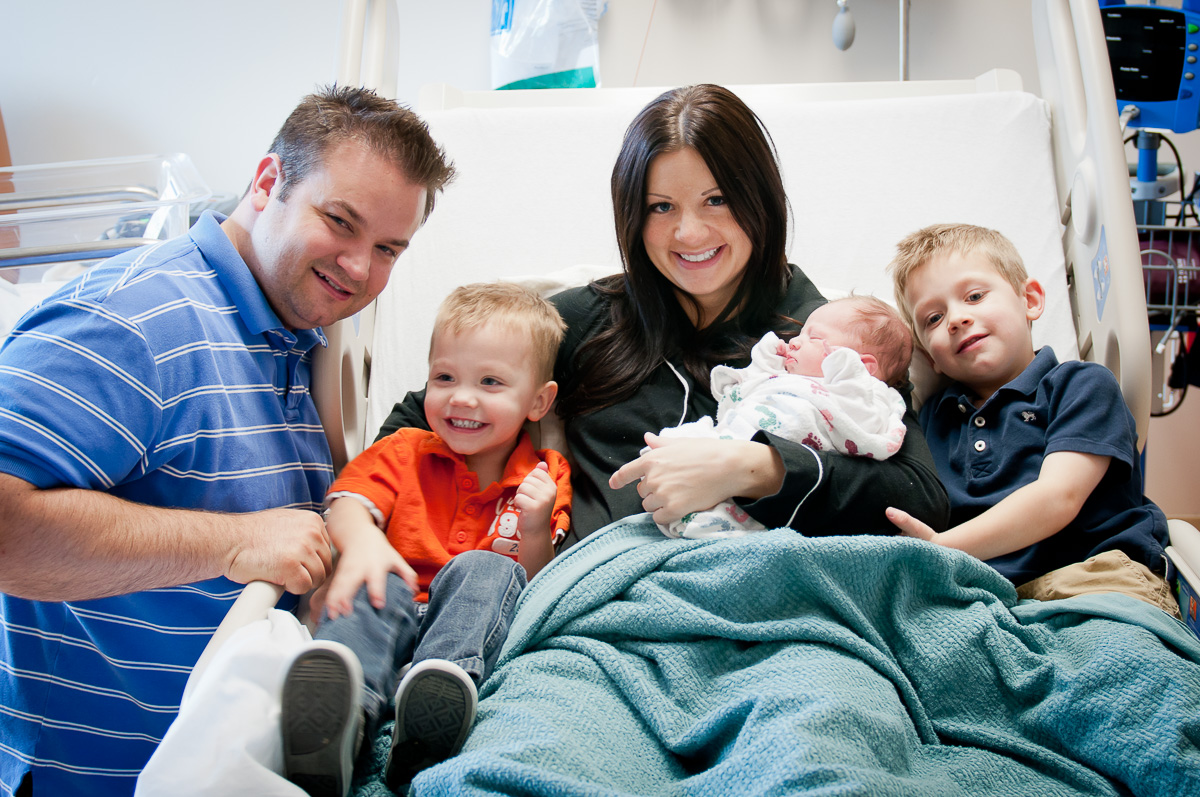 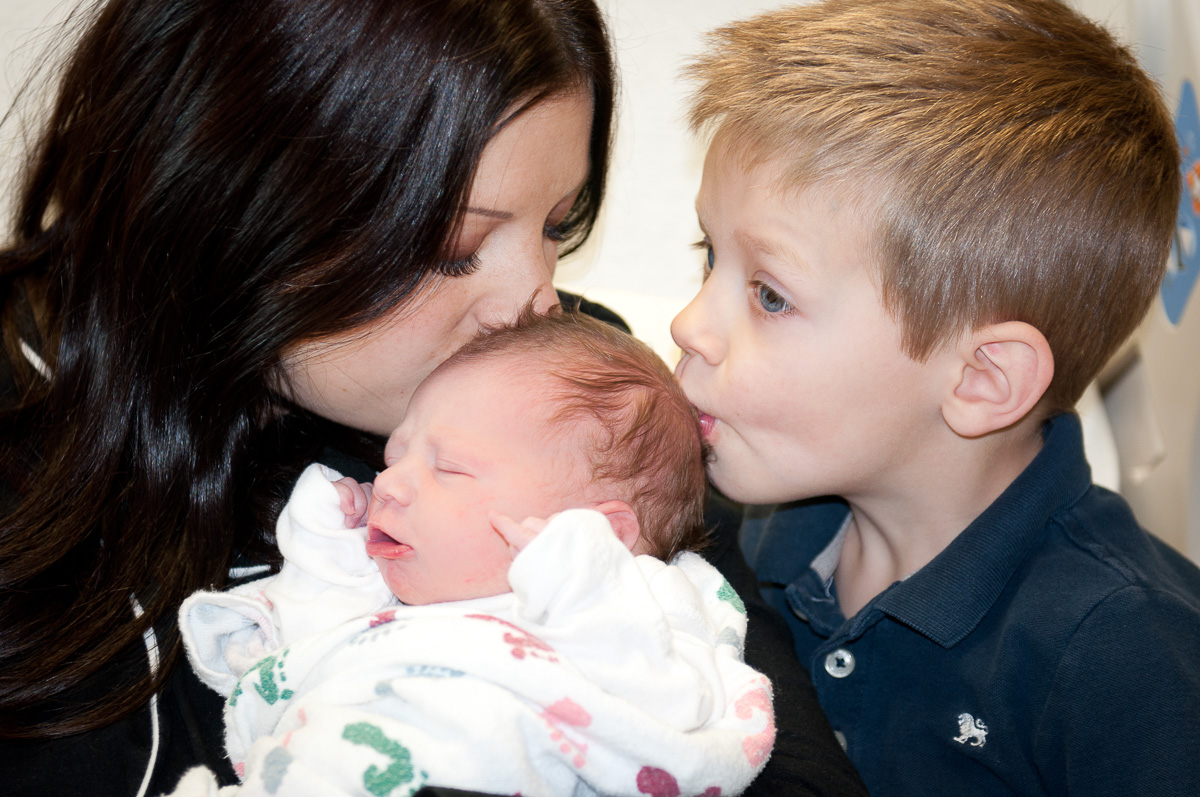 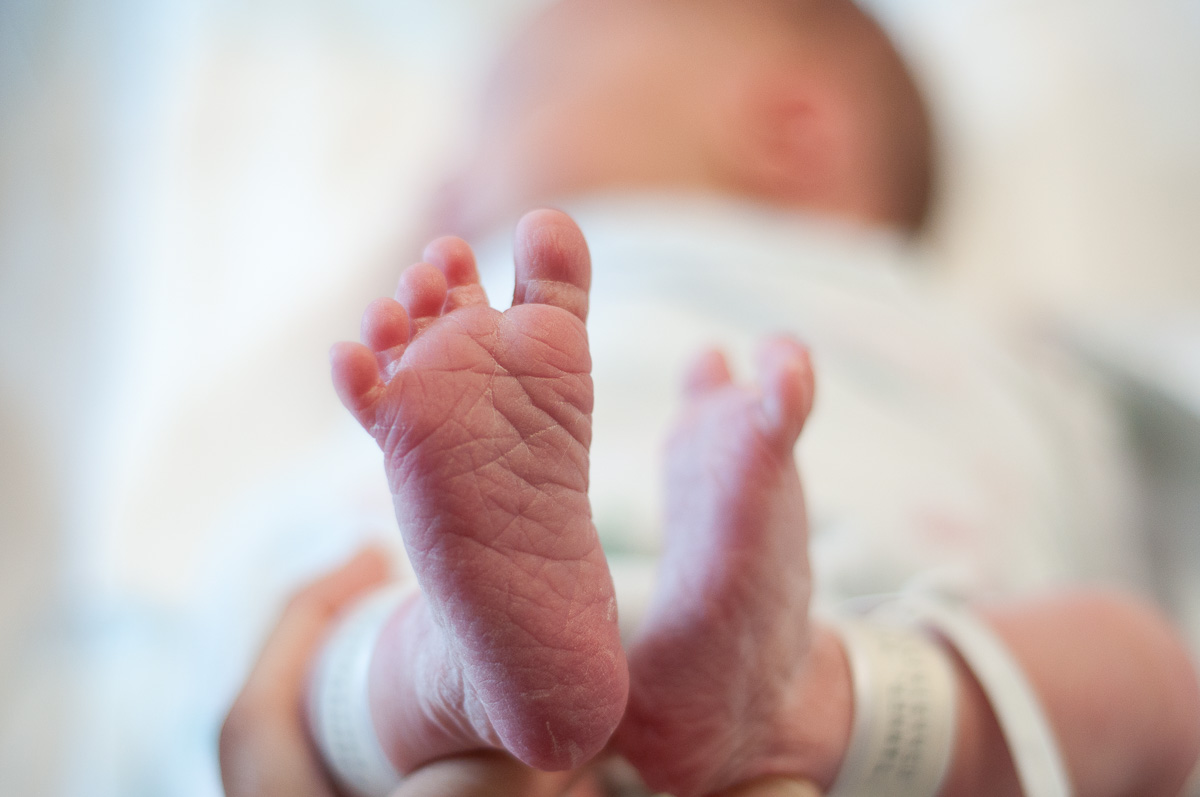 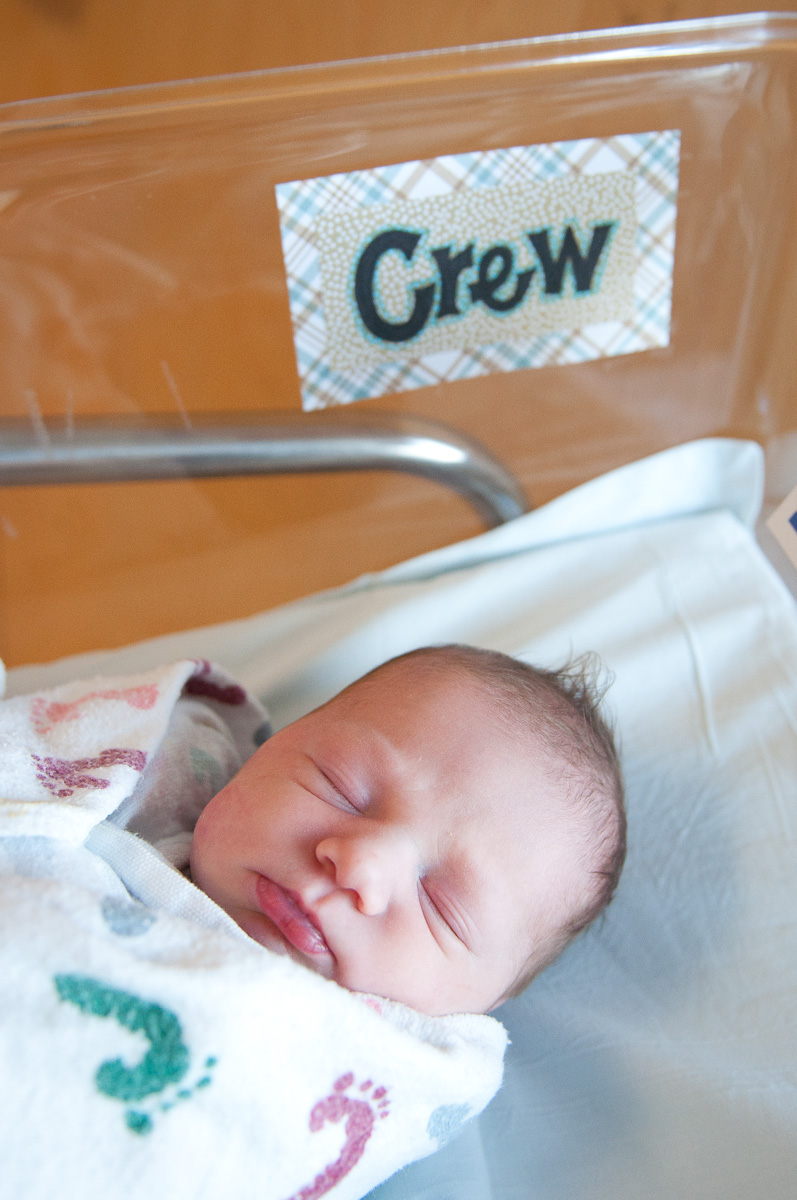 But right around the time the boys were leaving, the spinal headache came on full force. “Spinal headache” can’t properly express the pain I was in. It was the most intense pain I had ever experienced. Each time I sat up to try to eat or hold my baby, the pain shot through my head and neck and made my entire body throb.
Several visitors came to see me and I had to lay flat on my back the entire time. Laying flat alleviated most of the symptoms, but it wasn’t ideal for taking care of a newborn.

The worst part was that I couldn’t hold Crew. I couldn’t change him or lift him or take pictures of his sweet face. I had to feed him laying down which was tricky and painful. After such a grueling pregnancy, I couldn’t help but think that I just could not catch a break.

The anesthesiologist came in to tell me my options. I could wait it out and the spinal headache would most likely go away within 1-2 weeks. But I would have to spend that time exclusively flat on my back. And each time I would momentarily sit up, I would experience excruciating pain. Or, I could get a second blood patch, which had a 95% chance of eliminating the headache altogether since it was 24 hours past delivery.

The problem was that the second blood patch involved a blood draw and another epidural. And as agonizing as that headache was, I just did not think I could go through another round of pokes and panic.

That was before the most unbearable night of my life. Crew decided he was starving and wanted to be fed the entire night. I got almost no sleep, and feeding him was so painful that I could hardly see straight. I literally crawled on my hands and knees to the bathroom. I sobbed each time I thought about enduring another day of the pain.

I started to reconsider the blood patch as the sun rose. I think it was my midwife who convinced me that the outcome would be worth it. Troy and his brother gave me a blessing and I felt confident that the blood patch was the way to go, despite my fears.

Troy called the anesthesiologist who was nice enough to give us his personal cell phone number and set up the procedure for that afternoon. Only, I had a little suggestion for him. I wondered if since I still had my IV port in place, he could just knock me out for the blood patch. He chuckled at first, but as he thought about it more (and drew upon our first horrific experience with the epidural), he suggested that we use a sedative to make me more relaxed. Since I was an in-patient at the hospital, he could order the medication.

That sounded like a pretty good option to me, even if I couldn’t be made completely unconscious. The sedative was put into my IV and I don’t remember anything else that happened until the doctor was ripping off the tape on my arm. Troy said it was the best I’ve ever done. After an hour of laying flat on my back, I sat up and could only feel a mild headache. And by the end of the night, it was completely gone.

The second blood patch was a miracle procedure. It made a night and day difference. I was so happy to just be able to hold my baby! We packed him up and brought him home, and I have appreciated every moment of soaking him up since then. 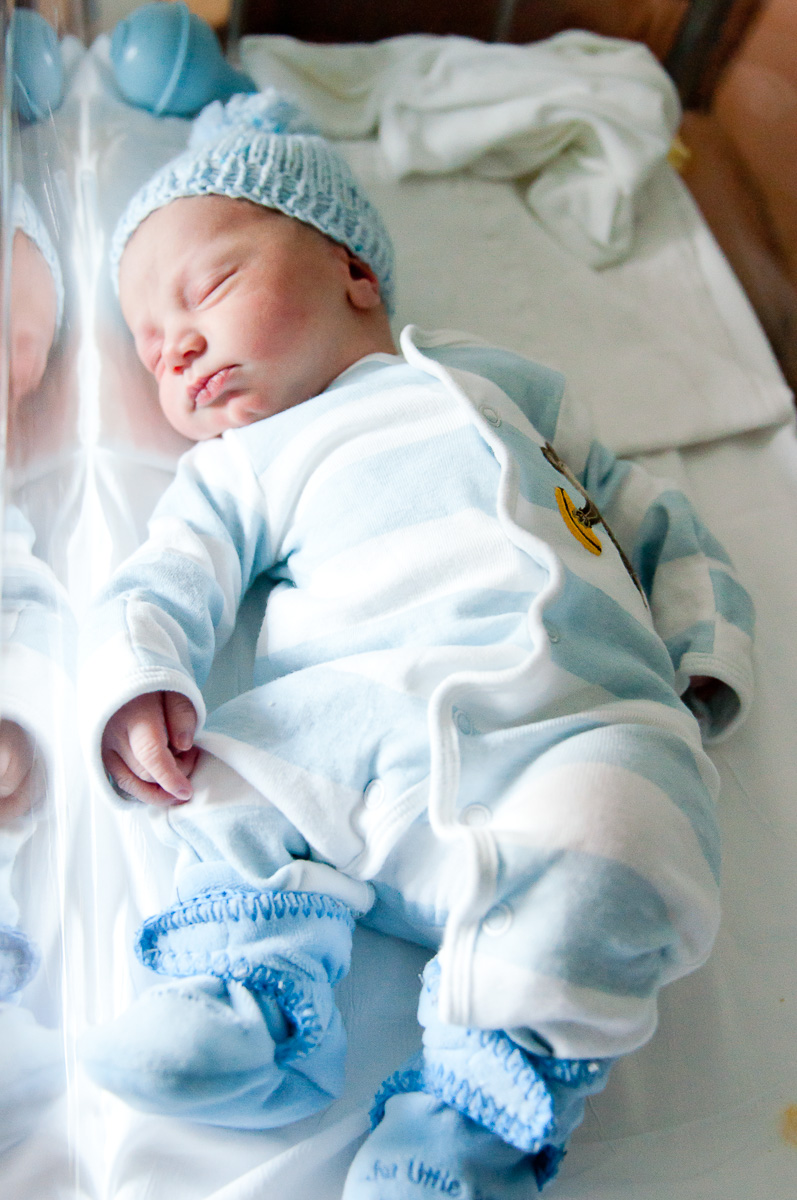 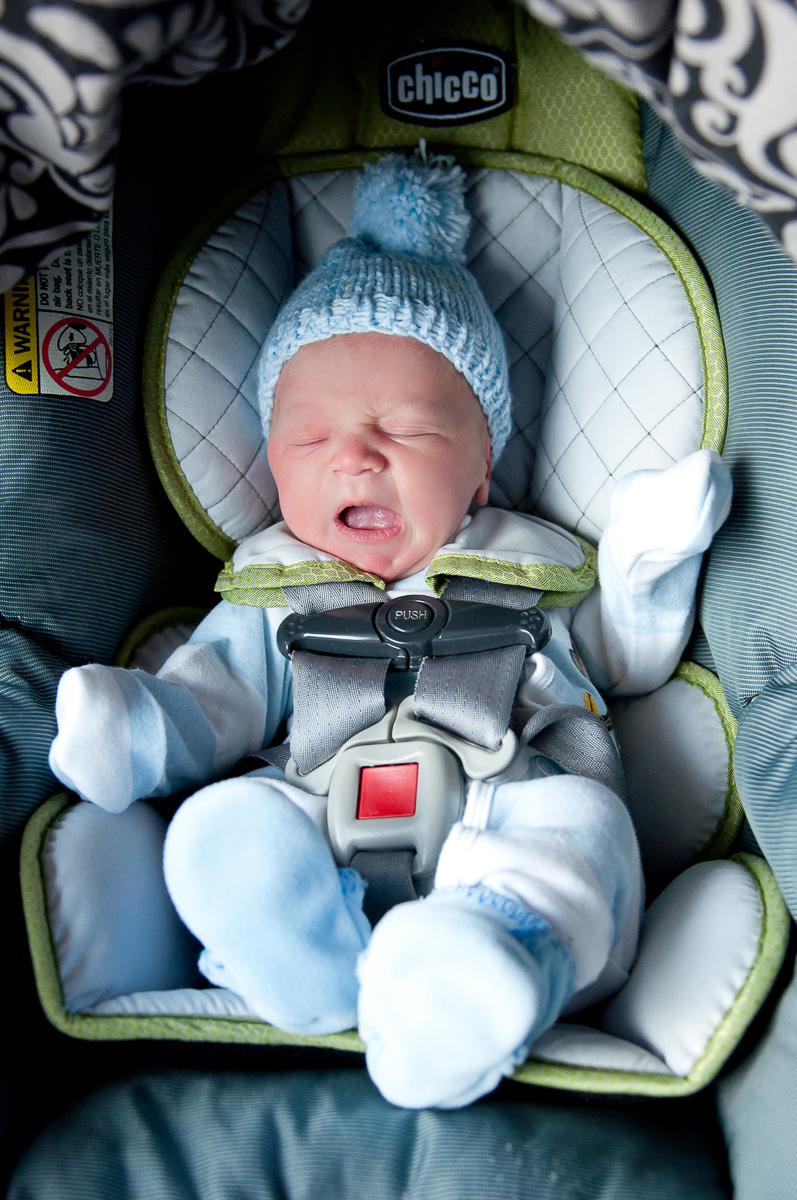 We’re so grateful for a healthy baby and mom.