We’ve held off on making a lot of changes to our early 90’s home because we’ve always thought we were just here temporarily. But fast forward five years, and we’re still here. We decided it was time to start updating some rooms to look a little more 21st century (I started with the brass doorknobs back here).

Back in November, we had our friend who does custom cabinets come and give us an estimate on an entire kitchen remodel. Troy was gung-ho on the idea until he saw the dollar signs start adding up. We decided that the money would be put to better use finishing our basement. Adding two bedrooms and a bathroom would certainly raise the value of our home more than a kitchen remodel. And with our growing family, we could use the extra living space.

We settled on finishing the basement (more on that later) which I agreed made more sense and that was that.

But once the idea of updating our kitchen was planted, we didn’t want to let it go altogether. So, we settled for plan B. Instead of a complete demolition including ripping out walls and adding custom cabinets and granite countertops, we decided to spruce up what we already had with some paint. Not only did we paint almost our entire main floor a dreamy shade of gray (Argos by Sherwin Williams), but my dream of a white kitchen finally came true. 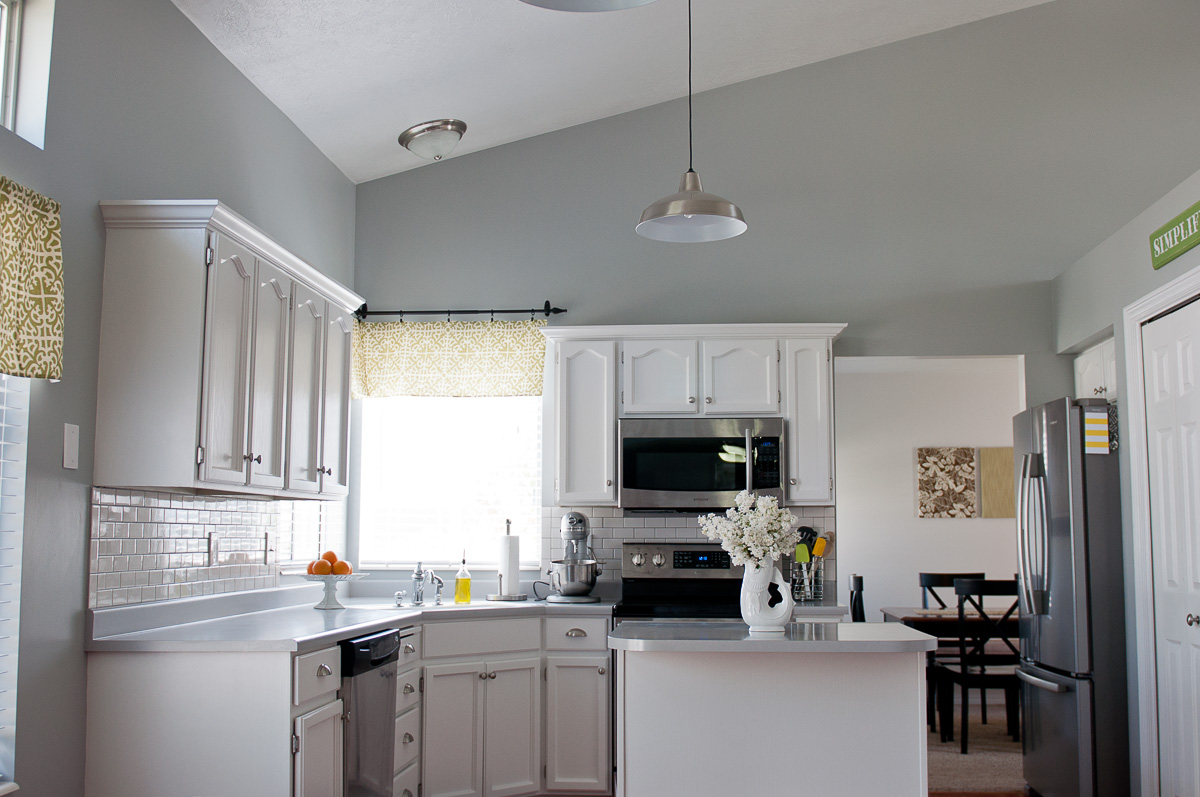 Here is what it looked like before with our cabinets in all of their orange-y oak glory: 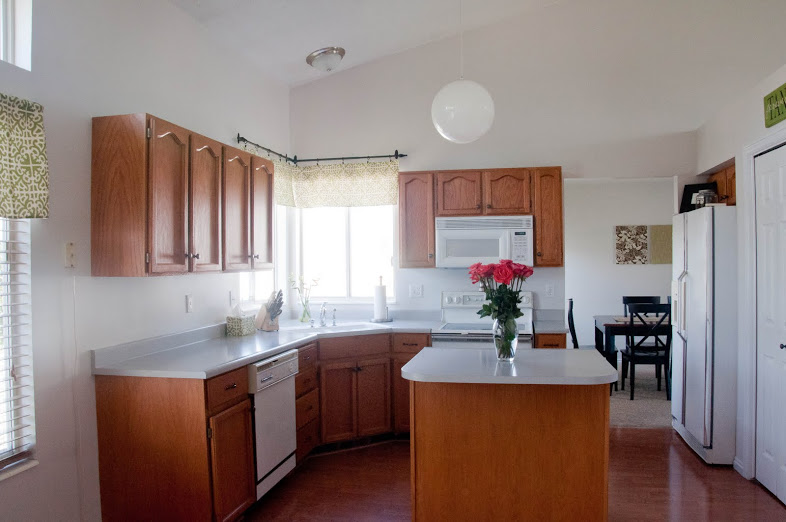 We started out thinking we would tackle this project ourselves. I’m not afraid of a little DIY, but I had heard too many nightmare stories about painting and sanding oak and it taking weeks to finish and the oak still showing through. Since I was also nine months pregnant when the ideas starting rolling, we decided to leave it to the pros. Our kitchen was out of commission for a week, but they did such a great job making sure the cabinet fronts were smooth and sprayed evenly.

I was literally hunting in the basement for the right type of screws for the painter to hang the hardware in between contractions. Crew was born a few hours later so the kitchen was finished in the nick of time. 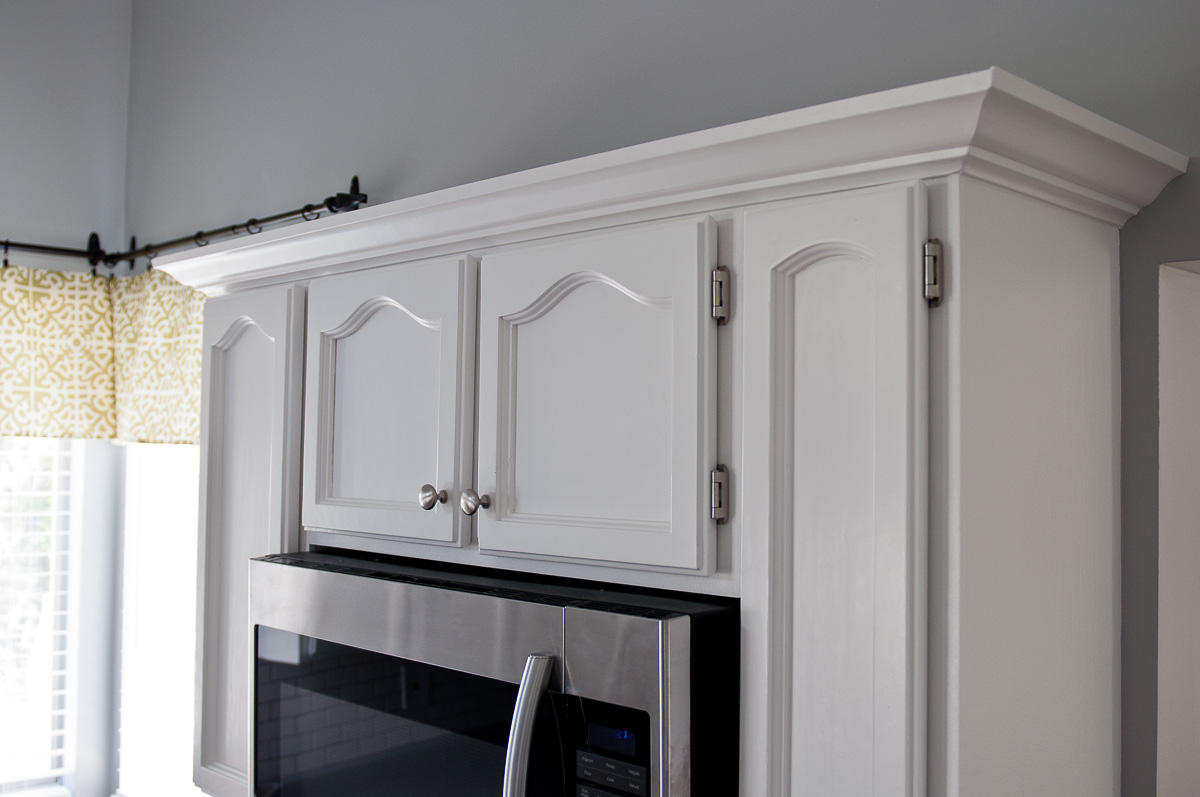 A few things that I think really make a difference are the molding on the top of the cabinets and the subway tile backsplash. Both were super inexpensive and quick little additions to give the kitchen a more custom look. 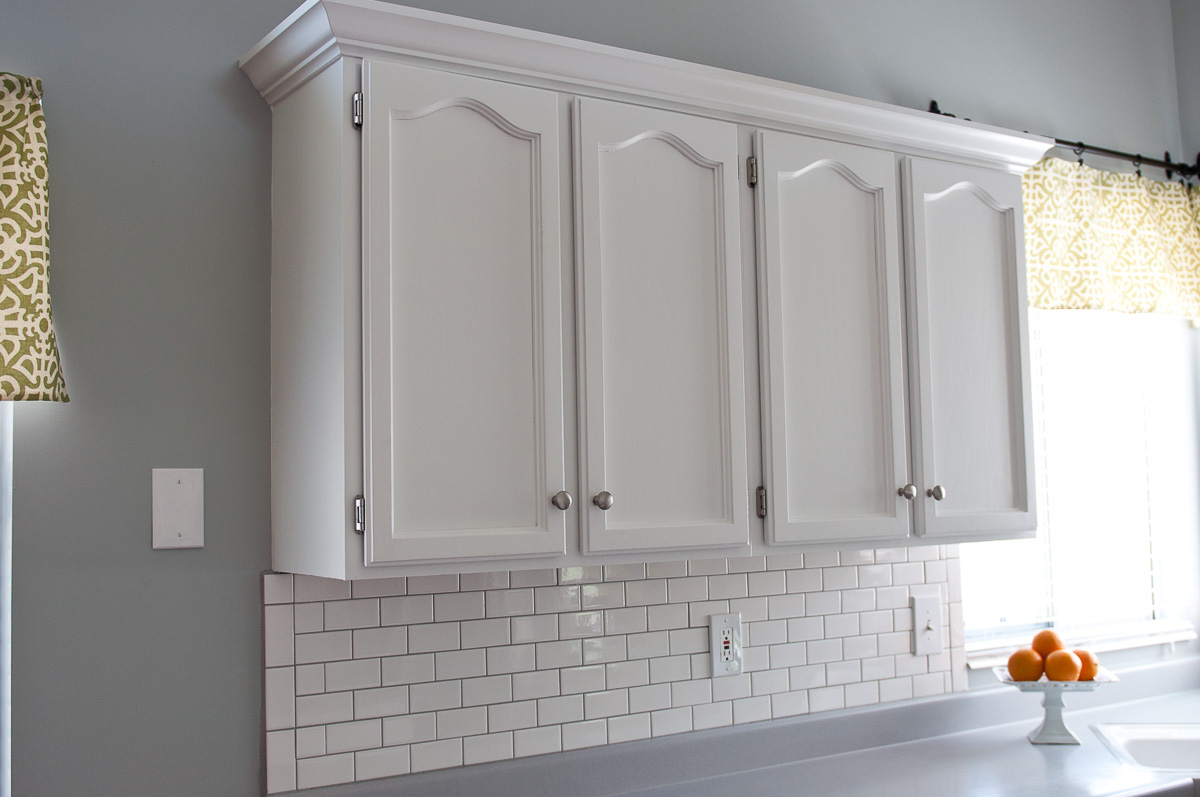 The new appliances were a splurge but they make a huge difference as well. And I’m so happy to have a functioning ice maker! I craved crushed ice constantly during my last few months of pregnancy. 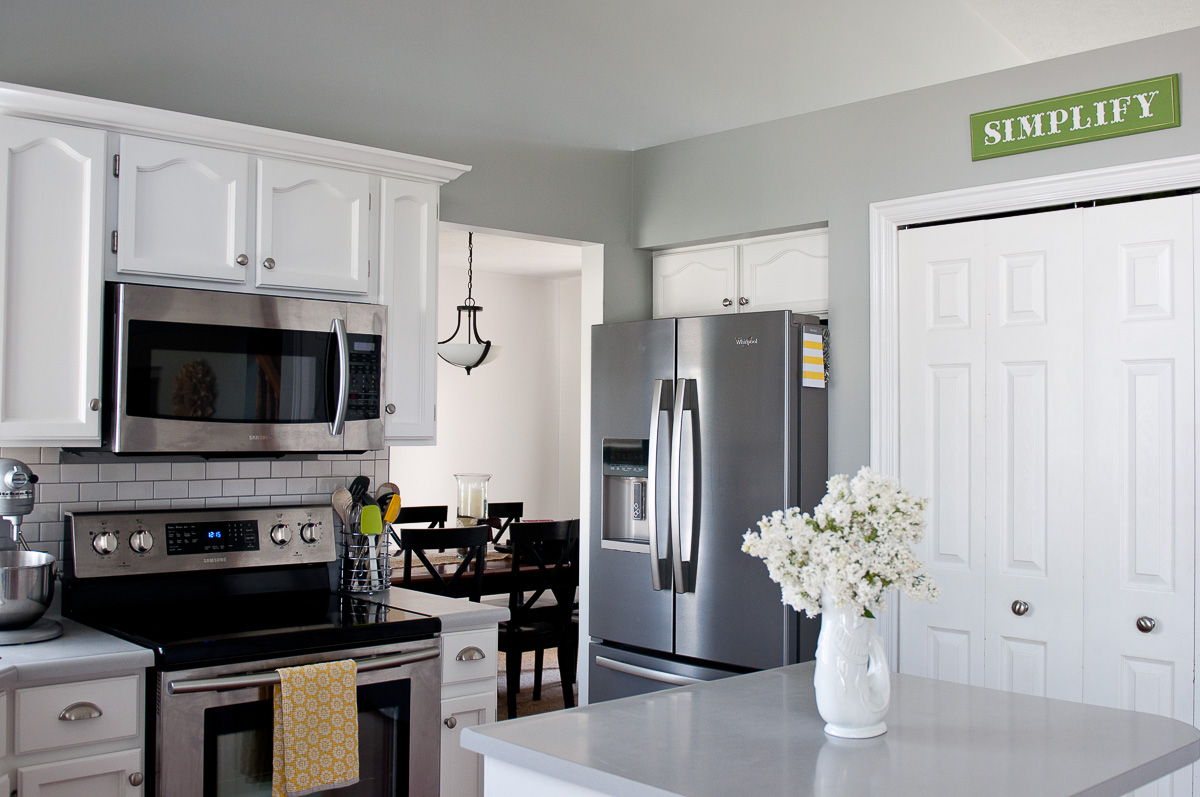 The kitchen always looks better (and smells divine) with some fresh lilacs from the tree right outside the kitchen window. 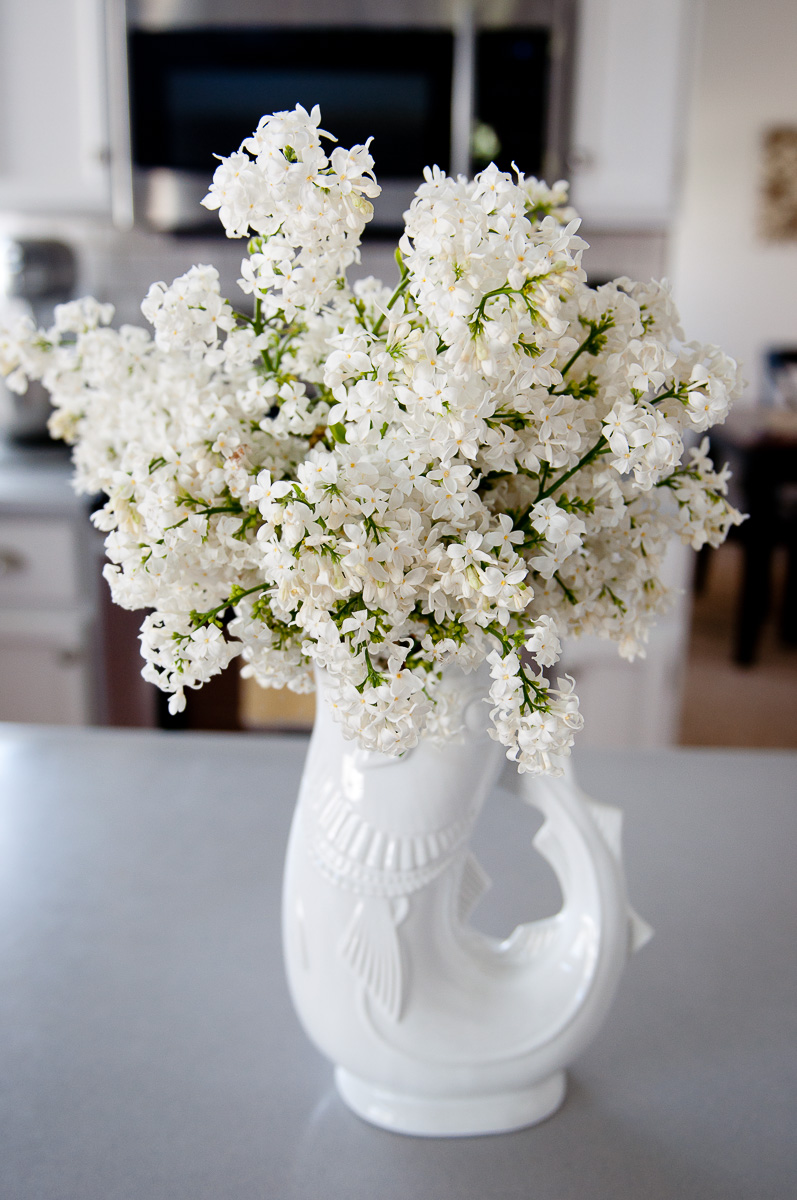 Eventually, we’d like to replace the countertops and sink, but our remodel funds are officially exhausted until I start working again after taking a good long maternity leave. I actually don’t mind the laminate tops that much. At least they are gray and don’t stick out like a sore thumb. 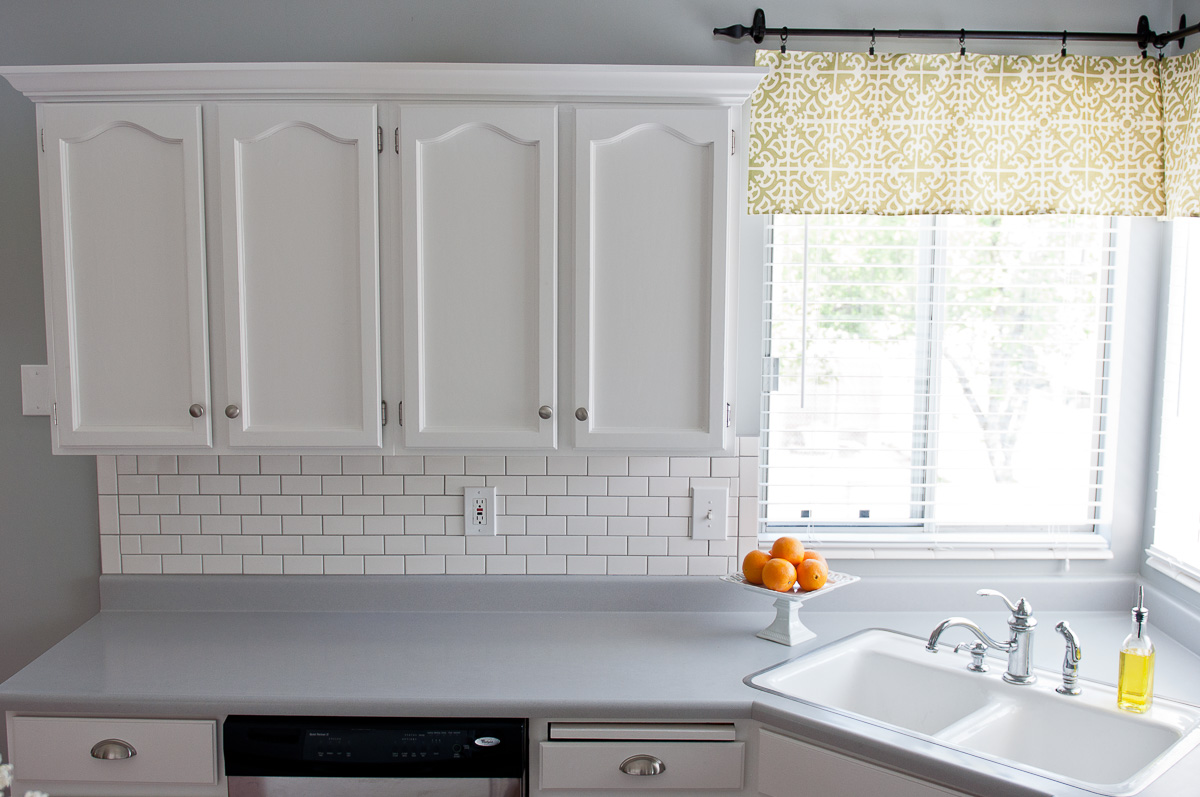 I love this reminder that I have hanging over our pantry to simplify. Oh how I need that reminder daily. I’m so glad that we decided to simplify the kitchen remodel project just enough to get a satisfying end result. 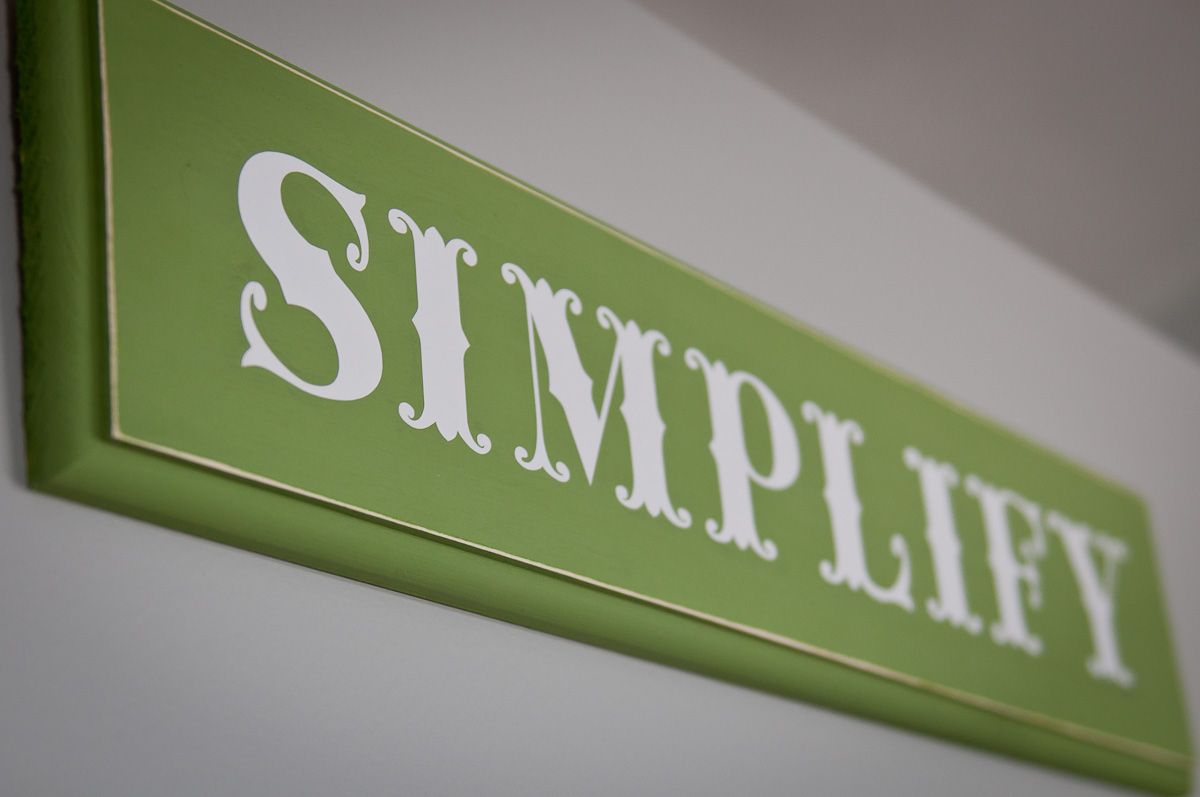 Next on the list: figuring out what to do with our dated oak banisters. And painting that dining room behind the kitchen. And adding wainscoting. And maybe new flooring. And trim. And actually decorating our newly finished basement. Okay, it never ends.