Skip to content
I know I say it every year, but the 4th of July is my absolute favorite holiday. I love that it is scorching hot and we get to boat and BBQ and listen to loud music and stay up late and watch fireworks. I even love the traffic at the end of the night because it means that everyone else is out celebrating too.
I love even more what the holiday stands for. I recently finished the book Unbroken, which gave so much insight into minute details from WWII and the resilience and sacrifice of American soldiers. It forever impacted the way I think about those who serve for our country.
And what better way to celebrate our freedom than with some favorite traditions?
We love to make the boat look festive on the 4th.

We were so blessed to celebrate the 4th of July with both of our families who were in town for Crew’s baby blessing. My mom made some patriotic treat buckets for the boys to keep them occupied.

Nash thoroughly distracted his uncle Todd from driving the boat while his dad was out back surfing.

We asked Nash if he wanted to go on the surfboard and without hesitation he responded, “Okay.”

It didn’t take long for him to pop right up with his dad. Words cannot properly express the pure glee that overcame him as he soared across the waves. He had a perma-grin on his face the entire time.

Crew made his maiden voyage on the boat as well.

Troy decided to take a little snooze on the front of the boat and was abruptly awoken by an enormous wave drenching him with water.

Nash got braver and braver each time he surfed. When he came out with me, he started kicking the water to add a little more pizzazz to his voyage.

He begged to go back out each time a new surfer geared up. It was the highlight of our day to watch Nash conquer the surfboard without a shade of fear. In fact, I was snuggling with Nash after his nap today and asked him what his favorite part of the summer was so far. He instantly replied, “Nemember that surfboard?”

The boys thoroughly enjoyed watching Todd “sled” on the surfboard as well.

After a quick BBQ, we headed off to the main event. It was our second year bringing Blake to Stadium of Fire and the anticipation was almost as fun as the event itself. We decided that you have to be at least four in our family to attend – so it was still just Blake that got to go on a special outing with his parents. Once again, it was such a highlight for us to get to see the performers and fireworks through a child’s eyes.

Apparently the Air Force’s budget was cut this year so there were no jets flying over the stadium at the end of the National Anthem. That was my favorite part – it gave me chills every time. Blake sensed my disappointment and reminded me that there were other great parts too; like the parachuters jumping out of a helicopter carrying the American flag.

Blake focused so intently during the Pledge of Allegiance.

Kelly Clarkson was the headliner and gave a spectacular performance. A definite improvement over the Beach Boys last year.

The evening ended with a ginormous fireworks display and we came home 100% exhausted after the days’ events. 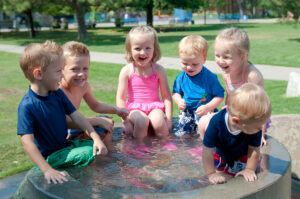 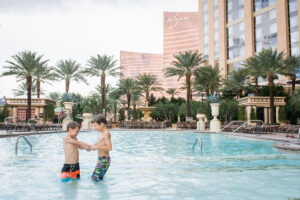