I’m taking a break from the regularly scheduled Michigan posts to document another month in the life of Crew that has swiftly come and gone.

The five month mark sure crept up on us. And just like I predicted when Crew turned four months old, I would still be trying to catch up on our summer adventures at this point in time. So, I’m trying to squeeze in Crew’s monthly updates in “real time” since he just keeps on getting older.

At five months, Crew is most certainly a pacifier baby and not a thumbsucker like his brothers. We have mixed feelings about this. Running upstairs several times to pop the binky back in when we lay him down to sleep gets kind of old. Troy and I have a term for this. It’s called “re-binking” (verb). We take turns running up to re-bink Crew when he pulls his paci out and starts whimpering. The new catch phrase at our house is, “It’s your turn to re-bink!” We’re teaching Blake and Nash the art of re-binking as well, but when they are in charge they usually end up climbing in the crib, making Crew giggle, forgetting what they were doing in the first place, or all of the above.

The binky is definitely not as easy to find in the middle of the night as a thumb. But, Crew has surprised us a few times by finding it himself and popping it in. I’m assuming that will start happening more and more. And the binky does comes in handy when we’re out and about and he needs a quick soothe. 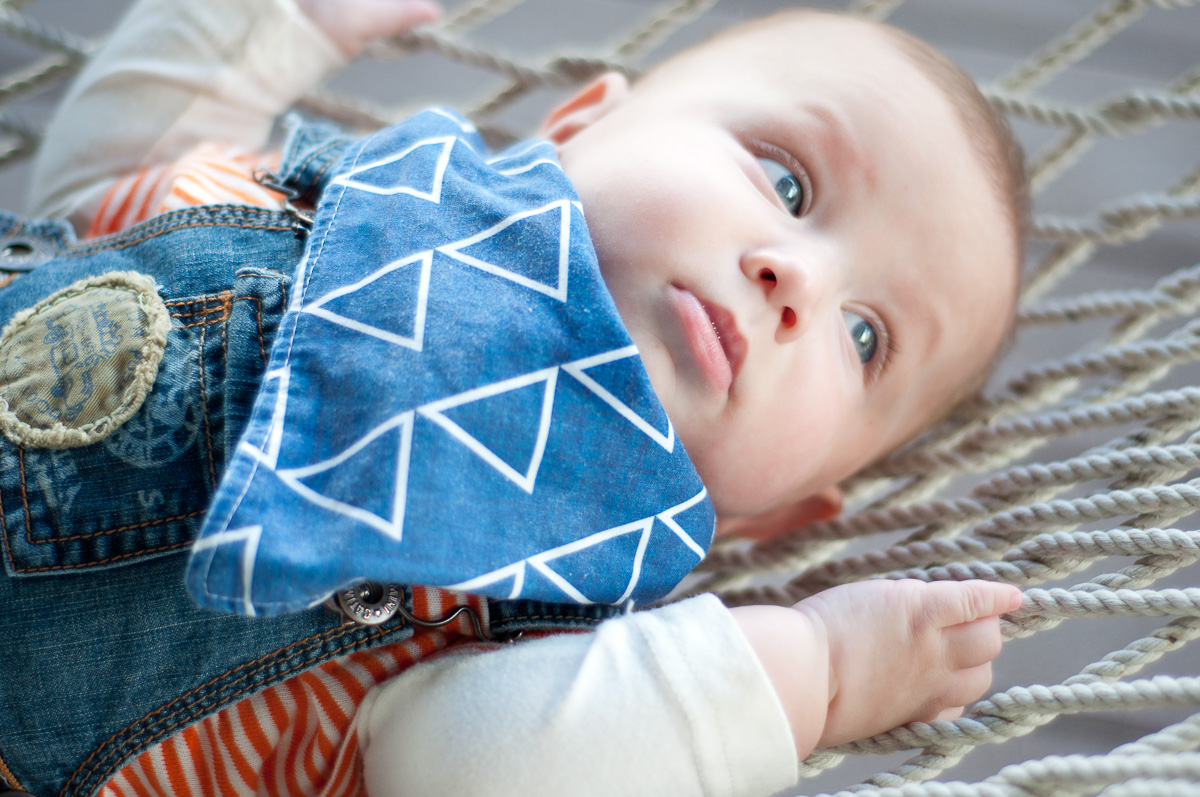 He is still a rolling machine, but has yet to figure out how to roll to his back. It makes him pretty mad when he inevitably gets stuck on his tummy time after time. We implemented our trick of the trade to promote sleeping instead of rolling all night long; placing the changing pad in his crib. It has just enough of an edge on each side to make it impossible to roll over. It works like a charm and allows Crew to save all of his rolling practice for the waking hours. 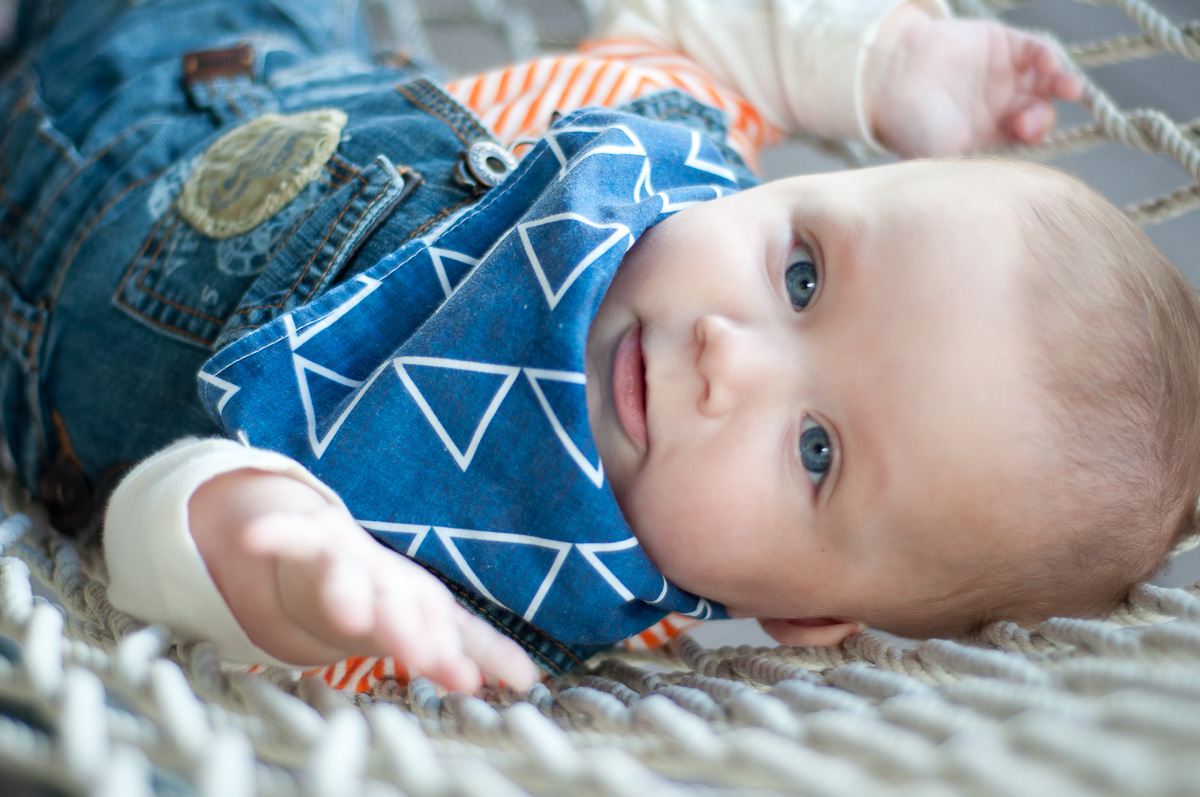 Crew is such a vocal little boy. He “talks” so much. Jabbering and cooing almost every waking second. He has this deep boyish voice that is so very cute.

And the drool. Oh, the drooooool. I love the new bandana bib trend. Not only are they stylish (anything to accessorize a baby boy), but they also absorb the mounds and mounds of drool. We were at a nice restaurant with friends recently (we still bring Crew everywhere with us) and our waiter jokingly asked if we’d like a cup to catch the drool. 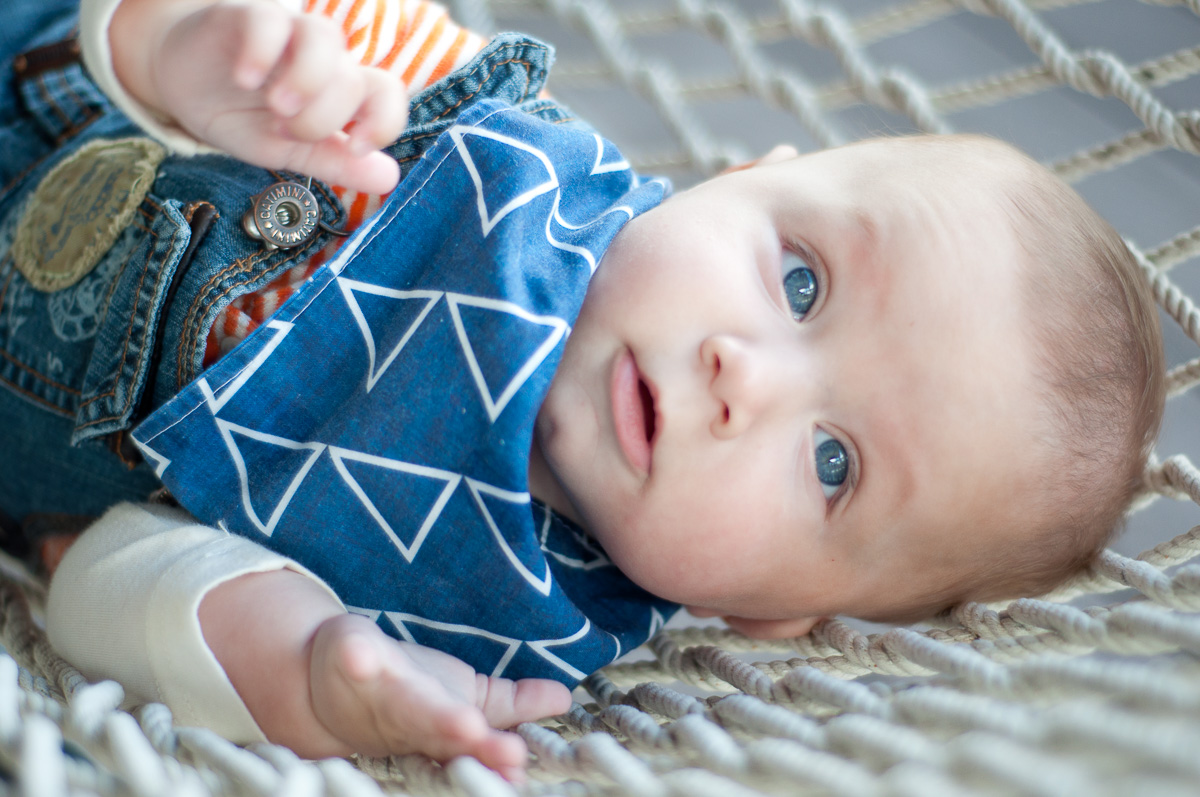 He’s starting to fall into a little more of a schedule, but for the most part I am still really flexible with him. I have to be with two other boys to cart back and forth to school and other activities. Sometimes I have a tinge of guilt for not putting Crew on a rigid, predictable schedule like I did with my other boys, but he doesn’t seem any worse for the wear. He is happy no matter what is thrown at him. My friends can attest to him being the most chill baby they’ve ever seen. 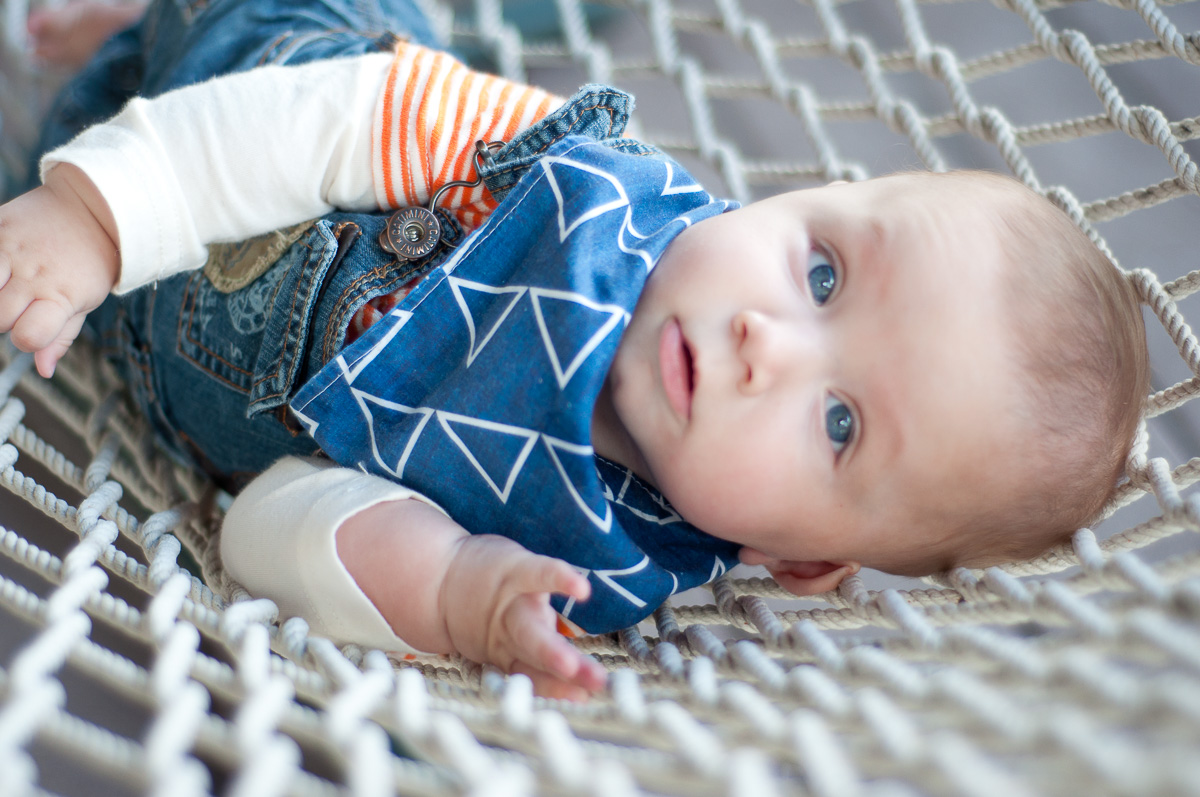 The amount of hair I’m losing postpartum (and have been losing continuously for the last two months) is out of control. Sometimes I wonder how I have any hair left.

But back to Crew. He loves to grab his toes. And he acts as if he hit the jackpot when he gets them all the way to his mouth for a little toe gnawing. 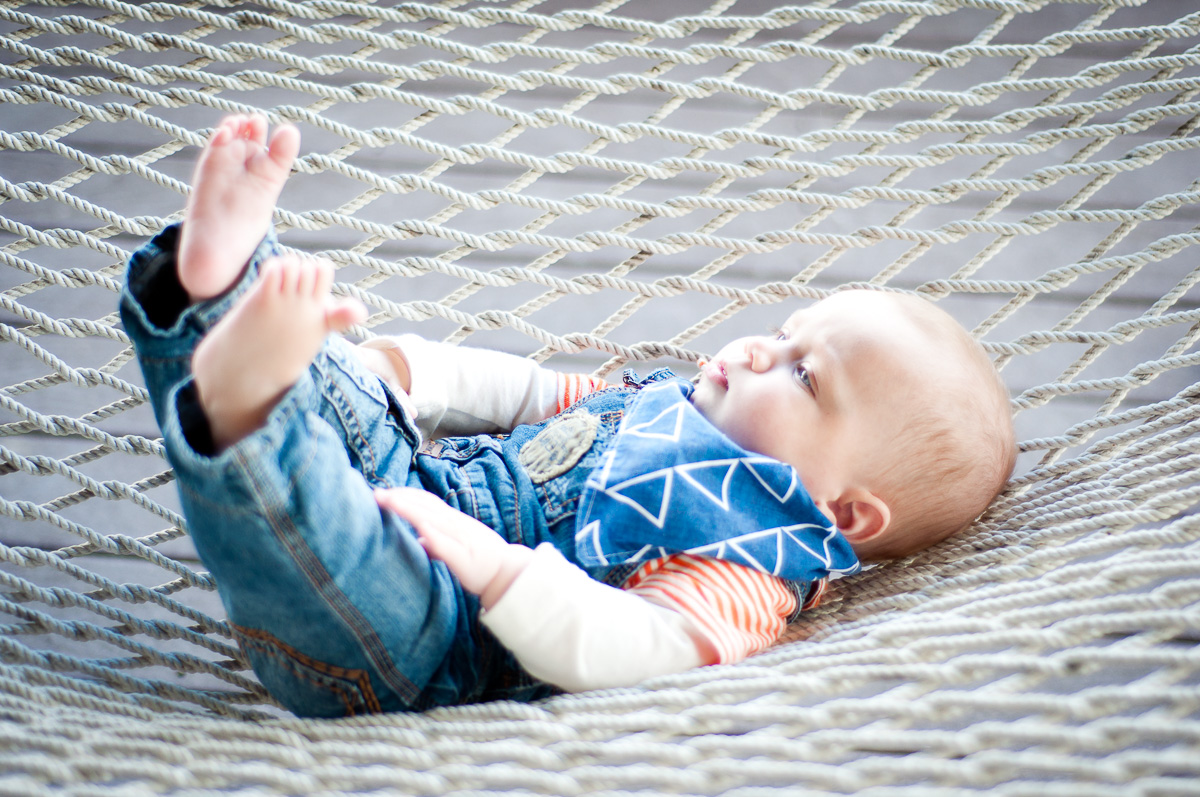 I have a special place in my heart for five months. Still cuddly, still dependent, a little more predictable, more smiley, developing more awareness, but still immobile and still no baby food. Only one more month of bliss before the dreaded spoon-feeding begins. 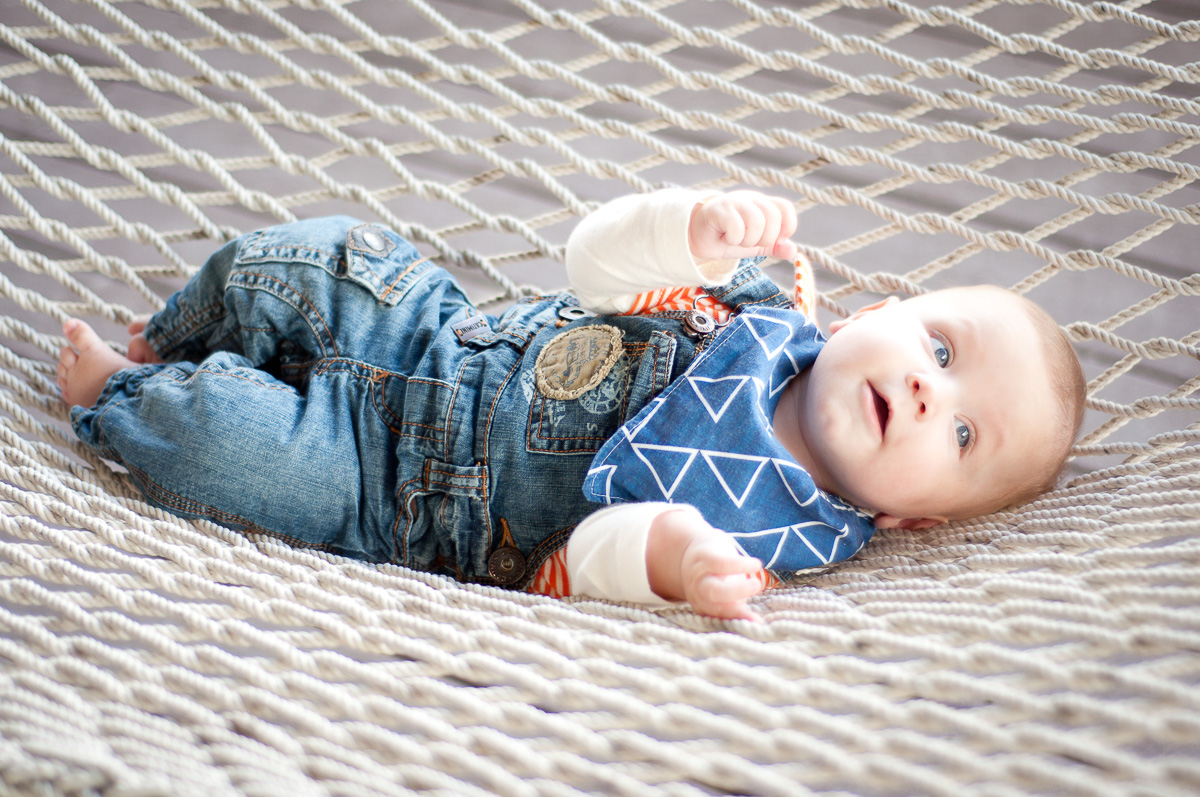 I’m not sure time can go by any quicker than it already is. Gone is the little newborn we brought home from the hospital and in his place is this handsome baby boy with a smile that lights up his entire face. 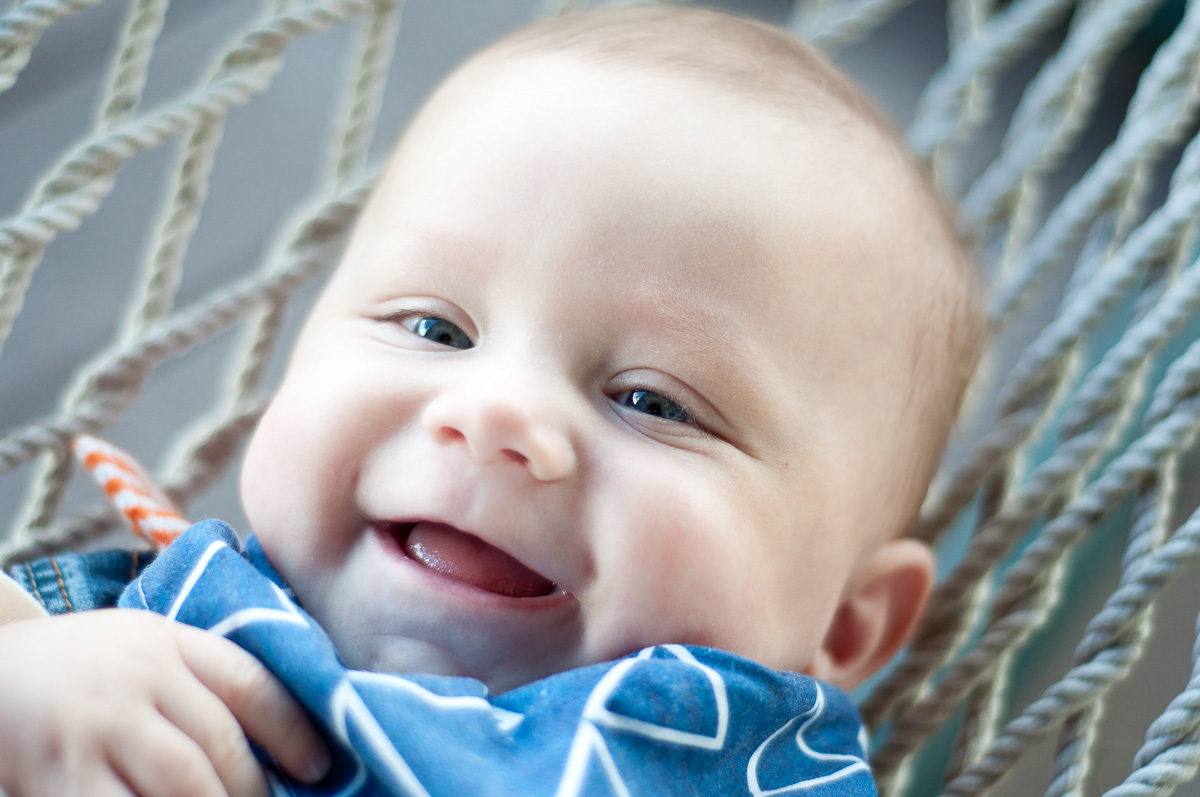