Skip to content
A week ago, we returned from the most anticipated trip of the year.

We spent a week at Disneyland and California Adventure with three other families that are our good friends. Twenty-four people in total made for one heck of a good time. Brace yourselves as I attempt to cram it all into one post.
We like to build up the anticipation a day or two before we go to the parks by spending the evening in Downtown Disney. There are no words for the level of excitement that ensued by seeing the tops of rides peeking out over the trees. We picked up our tickets and park guides, got sucked in to the vendor with balloon animals, and let the scheming begin.

Of course, we couldn’t go to Downtown Disney without a stop at The LEGO Store. Blake was in LEGO heaven.

This is what Blake’s face looked like on our first morning while waiting in line to enter the park.

Now that is pure glee. After months and months of countdowns, studying park guides, navigating through Disneyland apps, and discussing the details with all of our friends, the time had finally arrived.
Disney sure knows how to put on a good show for Halloween.

Crew was the perfect age to make his debut trip. He was an angel the entire time. And I just couldn’t resist the Mickey Mouse get-up.

We had good weather with the exception of one rainy afternoon in Toontown.

Apparently on rainy days, this is the extent of the parade.

The characters just ride on a covered bus.

Thankfully, we hit the Pixar Play Parade on another day while the sun was shining.

Our friend Bella was so happy to be reunited with Nash, because it had been a whole three days since they’d seen each other back at home.

Nash was more interested in showing Bella his battle wounds.

The boys did a little pin trading this time around which I was really dreading at first. Our friend bought about a gazillion pins for the kids on eBay, and of course once all of the boys’ friends had pins to trade, I knew we wouldn’t be able to get away with dodging the activity all together.
I was worried that the pin trading would take away precious ride time and that our boys would be too young to confront adults and negotiate trades. But it ended up working out fine. We only traded pins with cast members a handful of times when it was convenient, and no one fought over or lost pins like I anticipated.

Since there were so many of us there we ended up splitting off a lot. Sometimes we’d spend a morning with one family and an afternoon with another depending on what rides or shows were on our agendas. Some of us did three day passes and some did five, so we had different paces and different priorities.
Three days is the absolute max that Troy can handle, and even that is pushing it. I felt like we were able to fit everything into three days though. We planned ahead what we wanted to do, utilized FastPasses, and really made the most of our time. On our third day we were even able to repeat some of our favorites.

Our kids sure loved it when we met up though.

I still can’t believe how good Crew was. All of a sudden I’d look down and he’d be asleep in his stroller, with no effort on our part. We traded off who went on the rides with the older boys when there was a height requirement and who stayed back with Crew. But the great thing about Disneyland is that he could go on almost everything.

I never minded being the one who stayed back with Crew because we’d walk around and people watch. I’d grab a shake or some ice cream at the new Ghirardelli chocolate location at California Adventure. And I loved checking out the new Cars Land addition. The last time we were there, Cars Land was about a month away from completion, so we tried to catch some glimpses from the top of the ferris wheel. We loved seeing how it turned out in person. Disney does not kid around with the details.

Nash was three on this trip and really good at it. He was much happier when he was sufficiently snacked. We stayed behind with a fizzy pomegranate limeade from the Cozy Cone while Troy and Blake rode the hot new ride, Radiator Springs Racers. And while we’re talking about food, might I say that the Chili Cone Queso in an edible cone from the same place was divine. Part of the Disneyland experience, we’ve discovered, is enjoying (and splurging on) the food.

And what do you know, just when Nash was maxed out with grumpiness, Lightning McQueen drove by the deserted road we were on and made his day.

We took full advantage of the rider switch passes that allow the parent that stayed behind with the baby to jump on the rides without having to wait in line again. The rider switch passes are good for two people, so one of us usually brought a boy with us for the second go around at each ride with a height requirement.
The Radiator Springs Racers ride was so popular that the wait was usually two hours. There was no way we were going to wait that long, so Troy lined up early for a FastPass one day while the rest of us were at Magic Morning in Fantasyland. Even the FastPasses were usually gone within an hour of the park opening, but he was able to secure some for us.
Nash and I rode with the rider switch pass, which was another ordeal because the ride closed down when we were about to enter. We eventually made it on later in the day and Nash met 40″ height requirement exactly (with a tiny bit of help from his shoes).  The ride did not disappoint. I don’t know if it was cool enough to wait in a two hour line, but it was definitely impressive.

The boys both said that Radiator Springs Racers was one of their favorite rides. Blake’s favorites also included Goofy’s Sky School, Soarin’ Over California, and Pirates of the Caribbean. Nash loved Buzz Lightyear Astro Blasters the most, with Mickey’s Fun Wheel and The Little Mermaid coming in as close seconds. We hit all of their favorites multiple times throughout the week.
Nash did not like Tower of Terror or Space Mountain. I really wanted them to try everything and not be scared. Blake always ended up loving the rides he was scared of in the end. But after Space Mountain, Nash declared, “Mom, that was NOT amazing.” I’ll even admit that the touches they added for Halloween were scary.
On our last day, Uncle Todd flew in and surprised the boys. Since I’m convinced they adore their uncle more than their parents, they were ecstatic to see him. Plus, it was Todd’s birthday, which meant he got to wear a special pin and cast members everywhere wished him a happy birthday.

Blake took it upon himself to show Todd the ropes of Disneyland. We managed to squeeze in six rides that Todd had never been on during the afternoon he was there, including Radiator Springs Racers, thanks to some more rider switch passes we held onto. When we were on Pirates of the Caribbean, Blake was literally shouting to Todd the entire time what to look for and what fog to touch and what would come next.

With our few remaining hours, we hit the new show, “Mickey and the Magical Map.” It was top notch, just like Aladdin and the Disney Jr. show.

Blake and his buddies collected every piece of confetti that fell from the theater.

We capped off our final night with Mickey’s Soundsational Parade. And some glow sticks that a random friend shared with us.

We almost called it a night, until Blake reminded us that we originally had World of Color in the plans for the day. I was a complete pushover at that point; I mean how could we end the trip on a sour note? Even though we were all tired and hungry, I wasn’t ready for the magic to be over yet either. We knew it was too late to get a good spot with our FastPasses, so we stood back by The Little Mermaid ride and actually had a much better view on the higher ground back there.

The next evening, we picked up some promised souvenirs at the Downtown Disney store with the Disney dollars the boys worked hard to earn. We all felt that end of trip letdown as we peeked at the rides over the trees one last time. The week we had been anticipating for months was over. Blake had tears streaming down his face as he came to terms with that fact. He wanted to hug something to say goodbye, so we found a tree at the back of Downtown Disney where we bid farewell.
Even though Disney trips are absolutely exhausting (and I’m sure you’re exhausted too if you’ve made it to the end of this novel), I couldn’t be happier with the memories we create there. 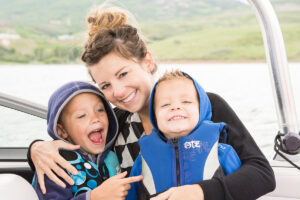 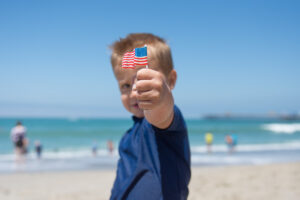