Skip to content
The Elf on the Shelf seems to be all the rage during the Christmas season.
We gave it a shot last year. It sounded like so much fun to have the boys wake up each morning to discover what that mischievous elf had been up to. And they loved finding him amidst their toys, buckled in a carseat, ziplining to the Christmas tree, or drawing funny faces on our family picture.
But the elf’s helper (a.k.a. me) despised that elf after about night three. I typically remembered the elf late at night on my way to bed, or after I was already in bed, exhausted, and had forgotten to move the darn thing. It added an extra element of stress to an already overloaded month of Christmas festivities. (I could relate to this article.)
I also discovered that I don’t like lying to my kids about a silly elf who gets into trouble to teach them to behave. What? That doesn’t even make sense. I don’t really like using any briberies to “teach them to behave.” Honestly, I feel awkward even hamming up the whole Santa Claus thing.
So, I thought that elf might just pack up and move back to the North Pole forever.
But right about the time Thanksgiving ended this year, the boys asked when “Jules” the elf was going to make her appearance.
I felt bad getting rid of the magic altogether, so I decided to simplify big time. Instead of coming up with elaborate elf locations each night, complete with an advent calendar full of disposable trinkets and treats, I wrapped up all of our Christmas books. Our elf dropped off the stack of books at the beginning of the month and hasn’t moved since the delivery.
The boys get to unwrap one book to read each night. Blake chooses on the odd nights and Nash takes the even nights. We snuggle up together in our pajamas by the tree and read the Christmas stories cover to cover.
I love this new tradition. I’ve heard of several other people who do similar things and I don’t know why I didn’t initiate reading by the light of the tree sooner. Especially since I have a well-stocked library when it comes to children’s Christmas books.
The boys’ attention is completely captivated as we read and I love taking a few minutes each evening to slow down and soak up the season that is otherwise nonstop and hectic. Even baby Crew enjoys reading time because he crawls around and obtains the pieces of wrapping that are strewn across the floor.
I really couldn’t love this new tradition more.
Next year, I’m hoping to keep the book idea and phase out the elf altogether. 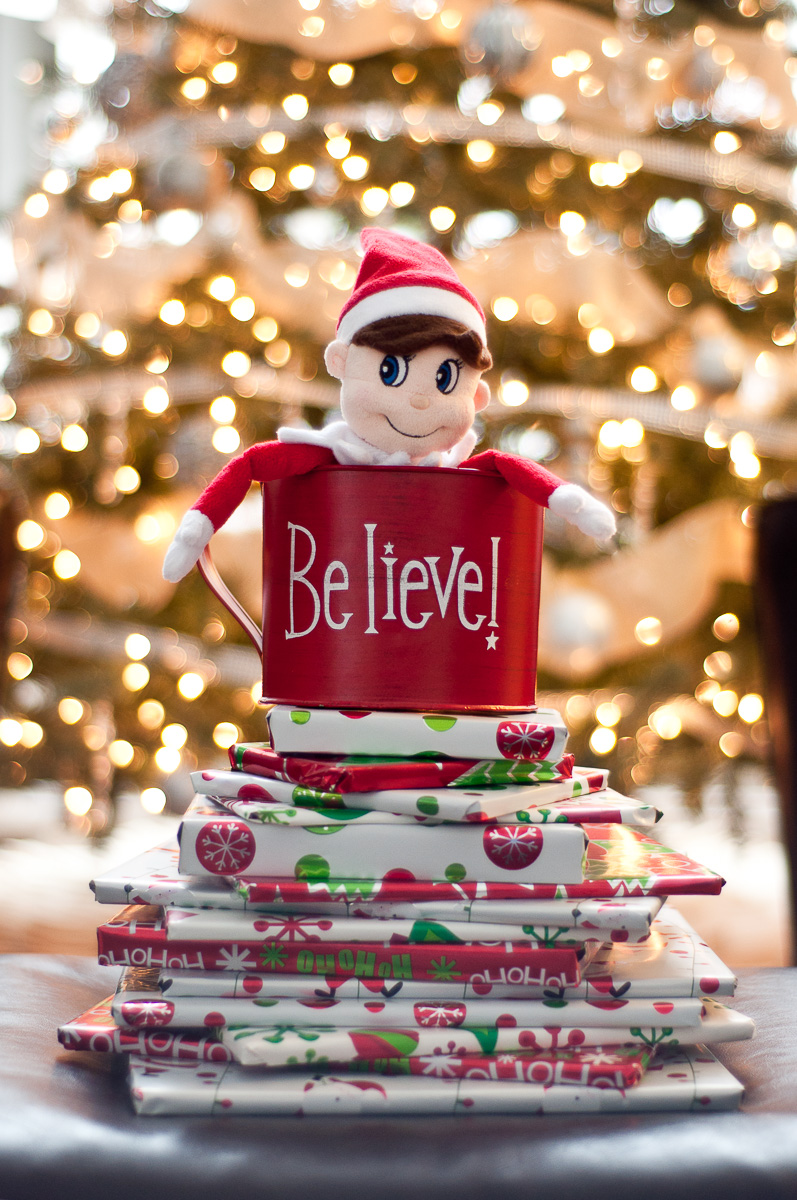