I loved staying in our own home for the first time since we’ve been married. It was so nice to celebrate around our own Christmas tree and not have to worry about packing up everyone and everything.

We kicked off Christmas Eve with a fancy dinner. 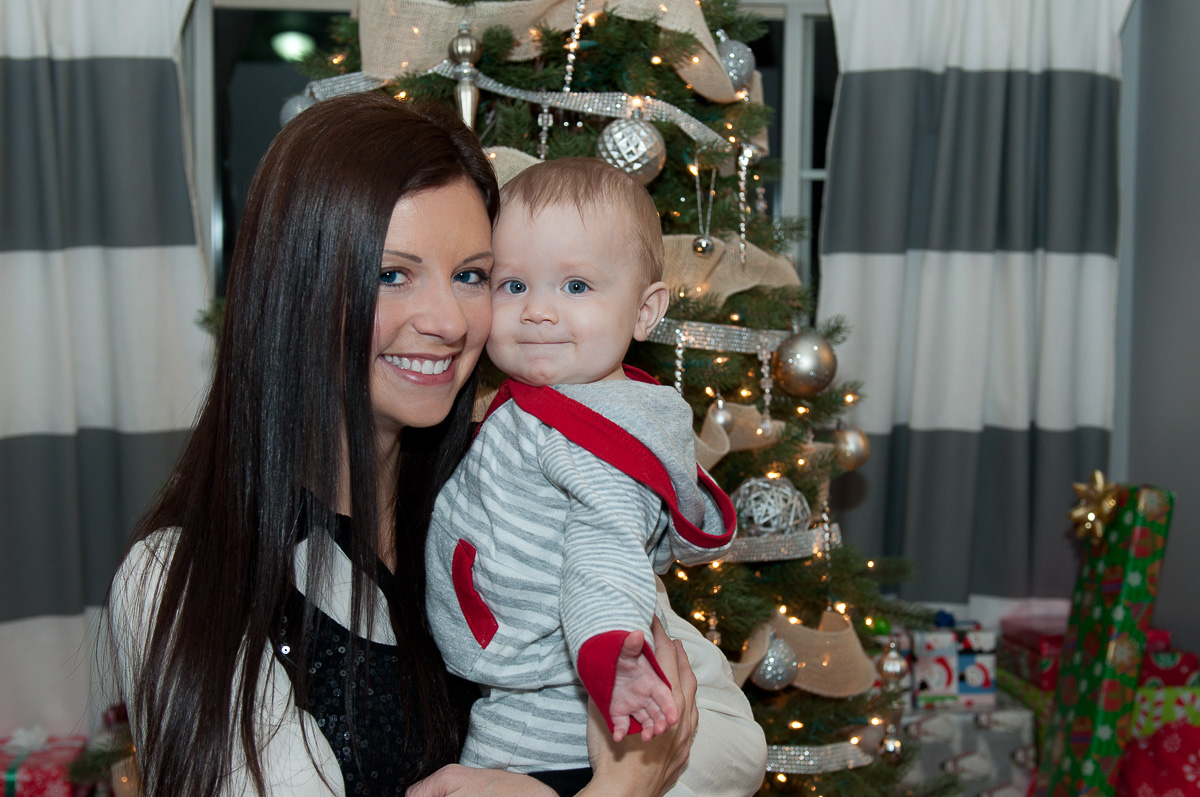 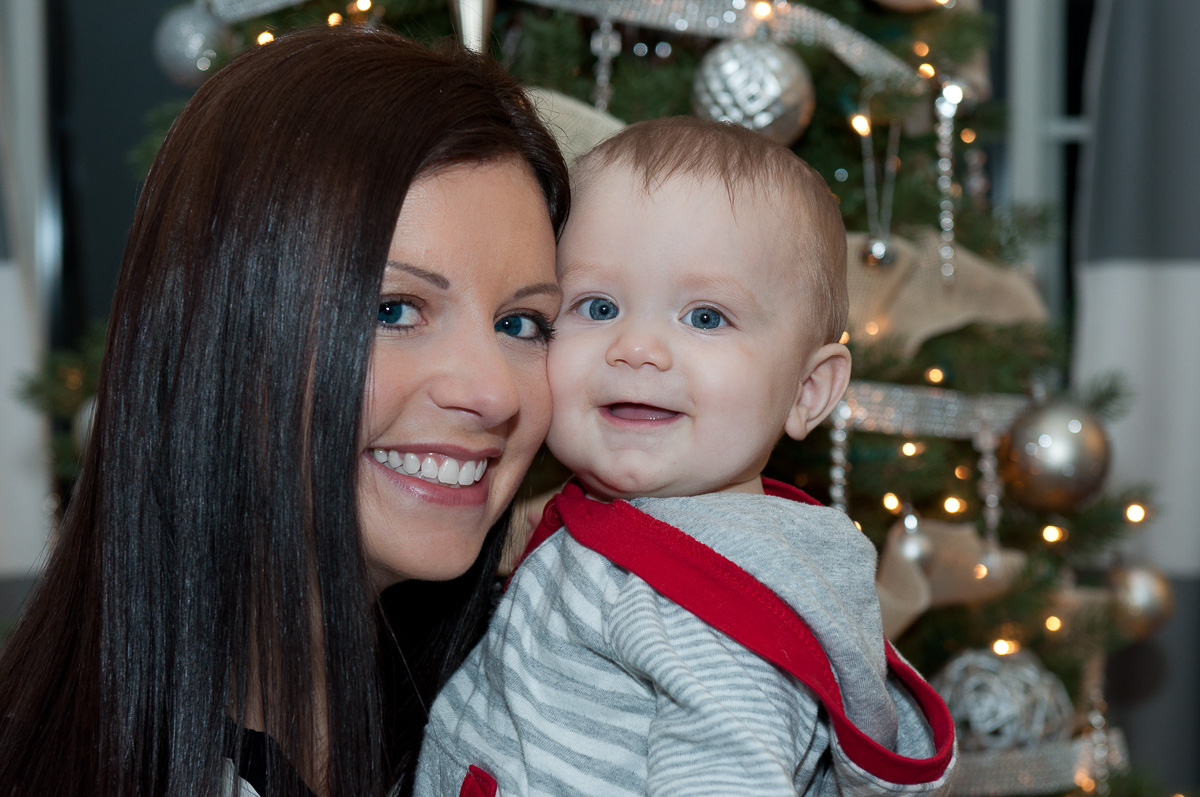 We opened our traditional Christmas Eve matching pajamas. The boys’ pants were a tad big on them. 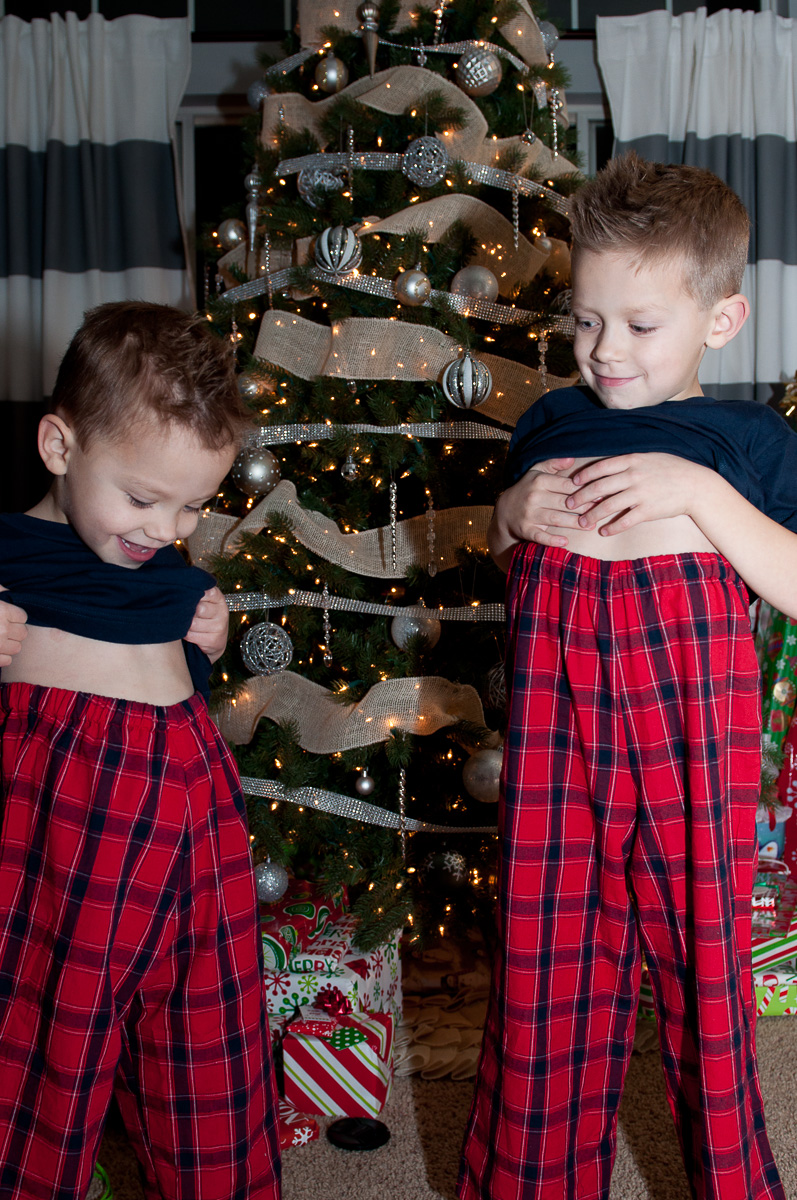 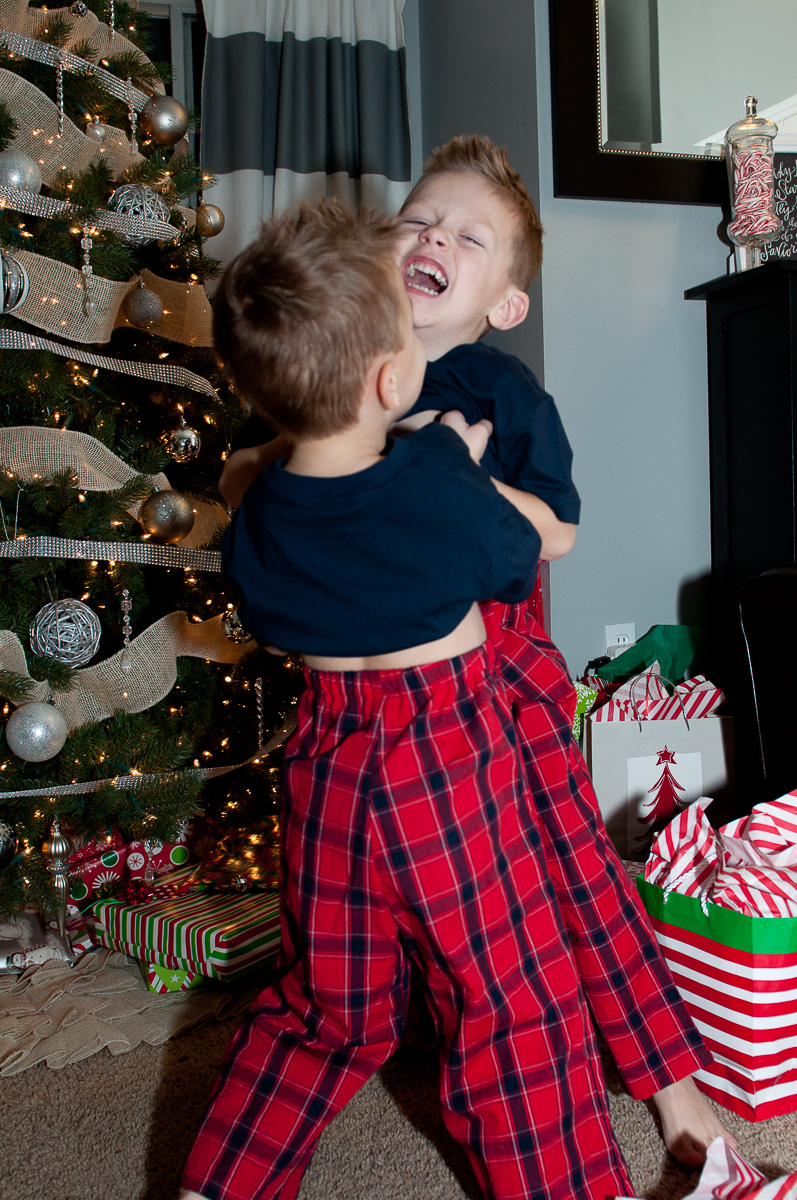 We read the story of the first Christmas, snuggled warm in our pajamas. 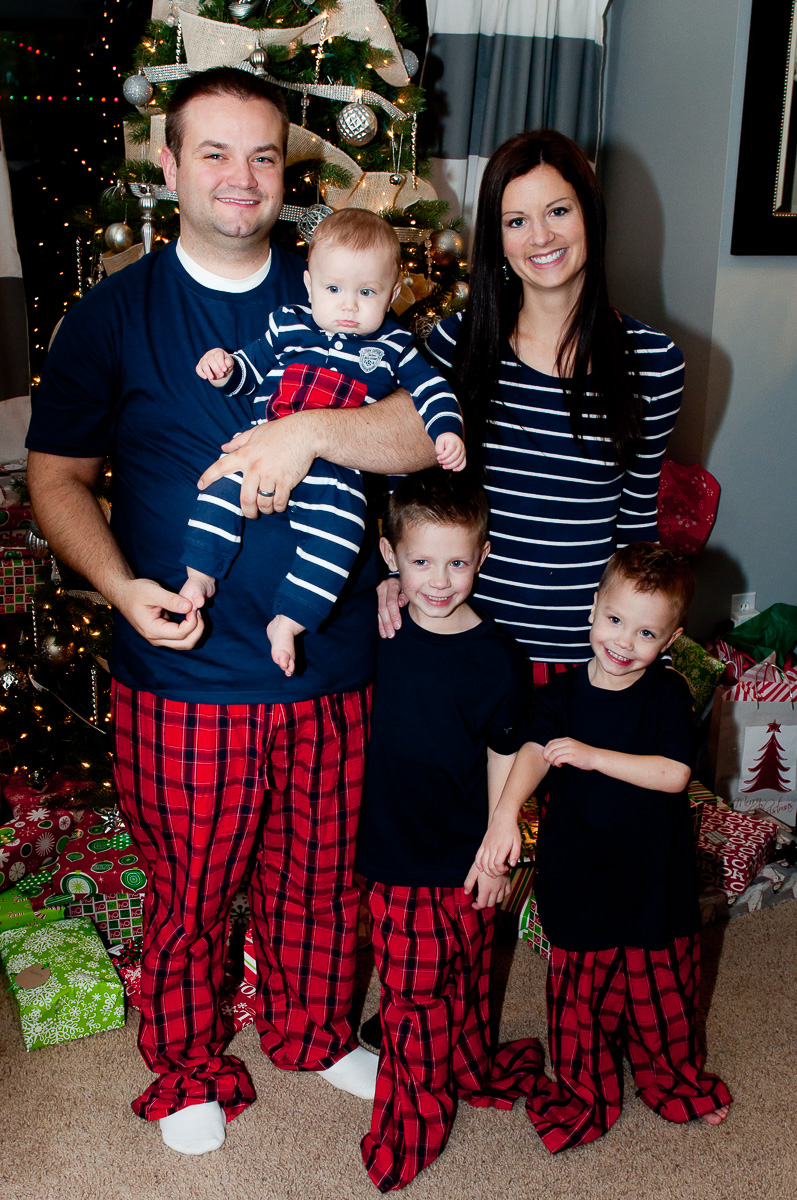 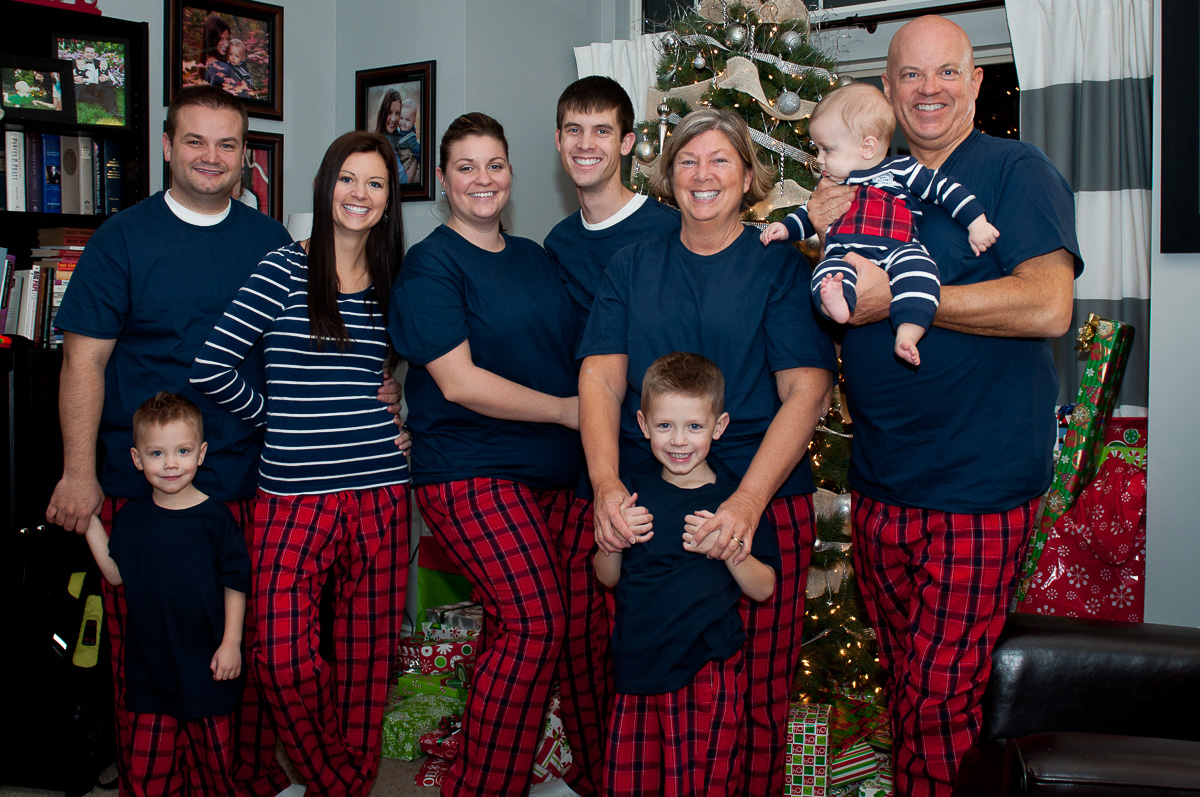 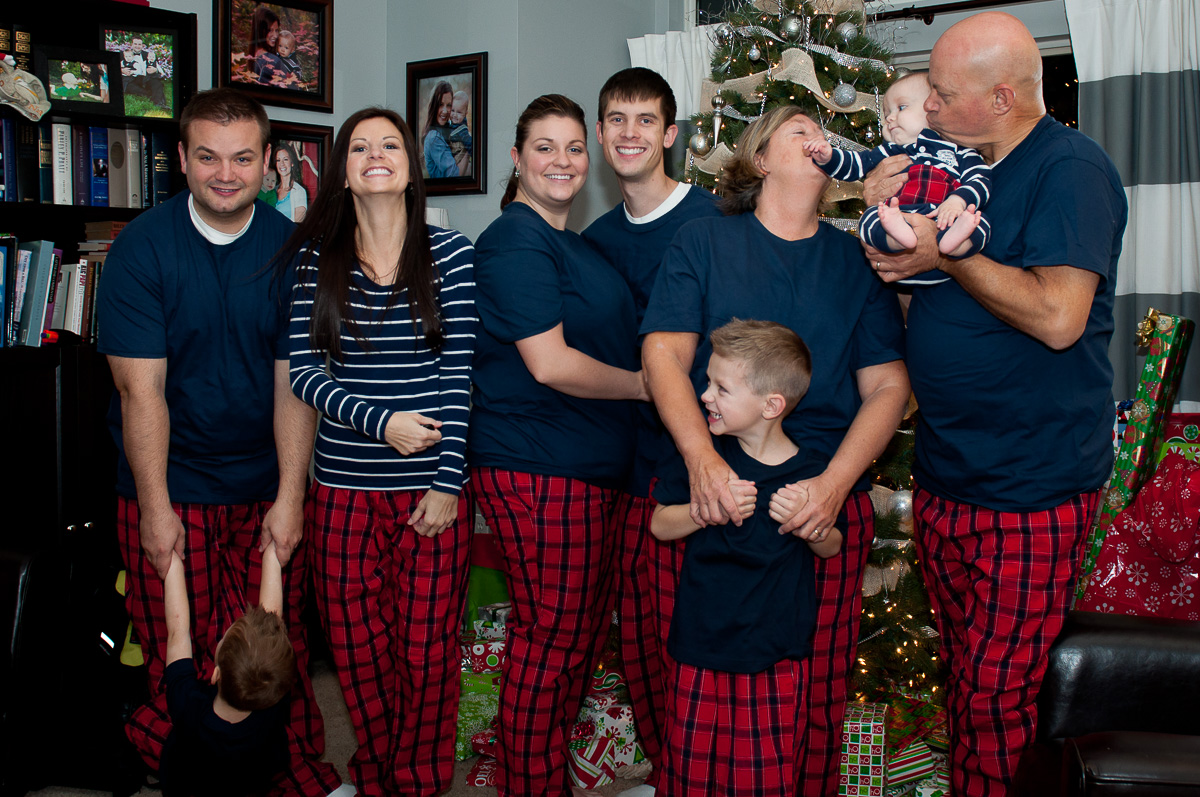 Cookies and milk were set out for Santa and carrots for the reindeer. Then it was off to bed while visions of sugarplums danced in our heads. 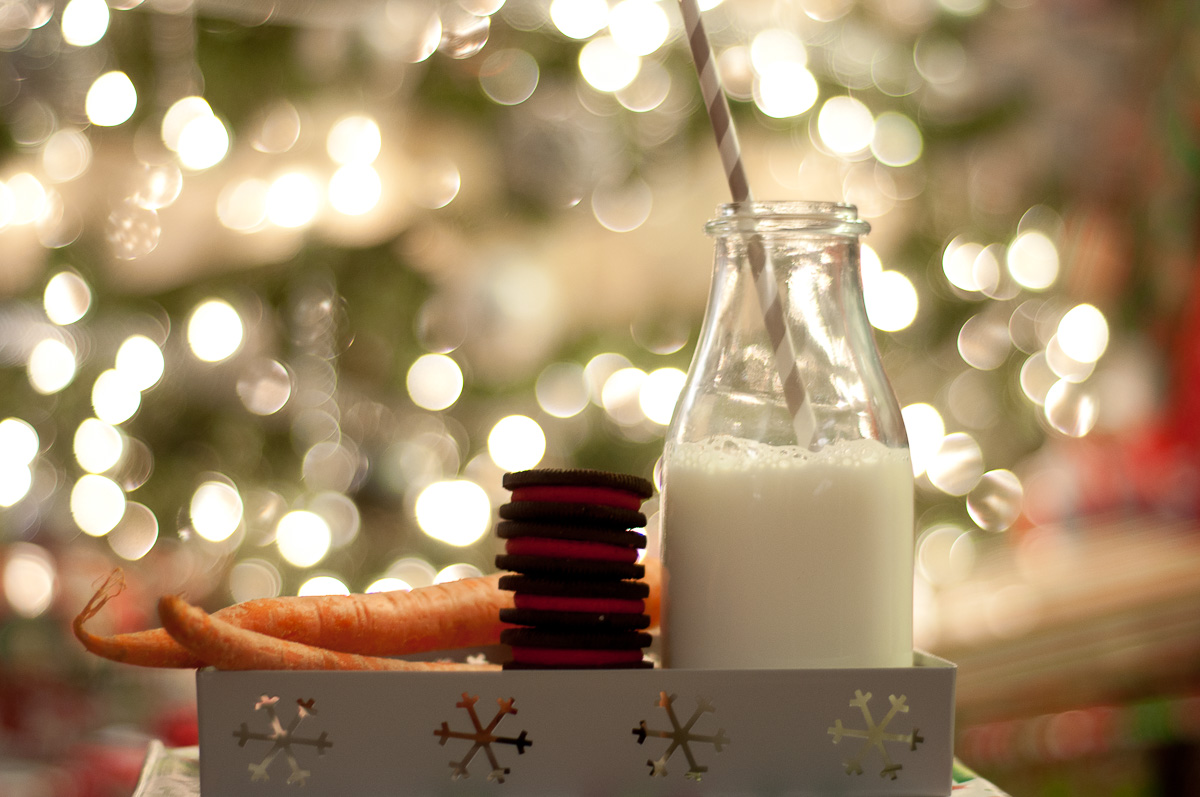 The boys were more than a little excited to discover what Santa had left on Christmas morning. 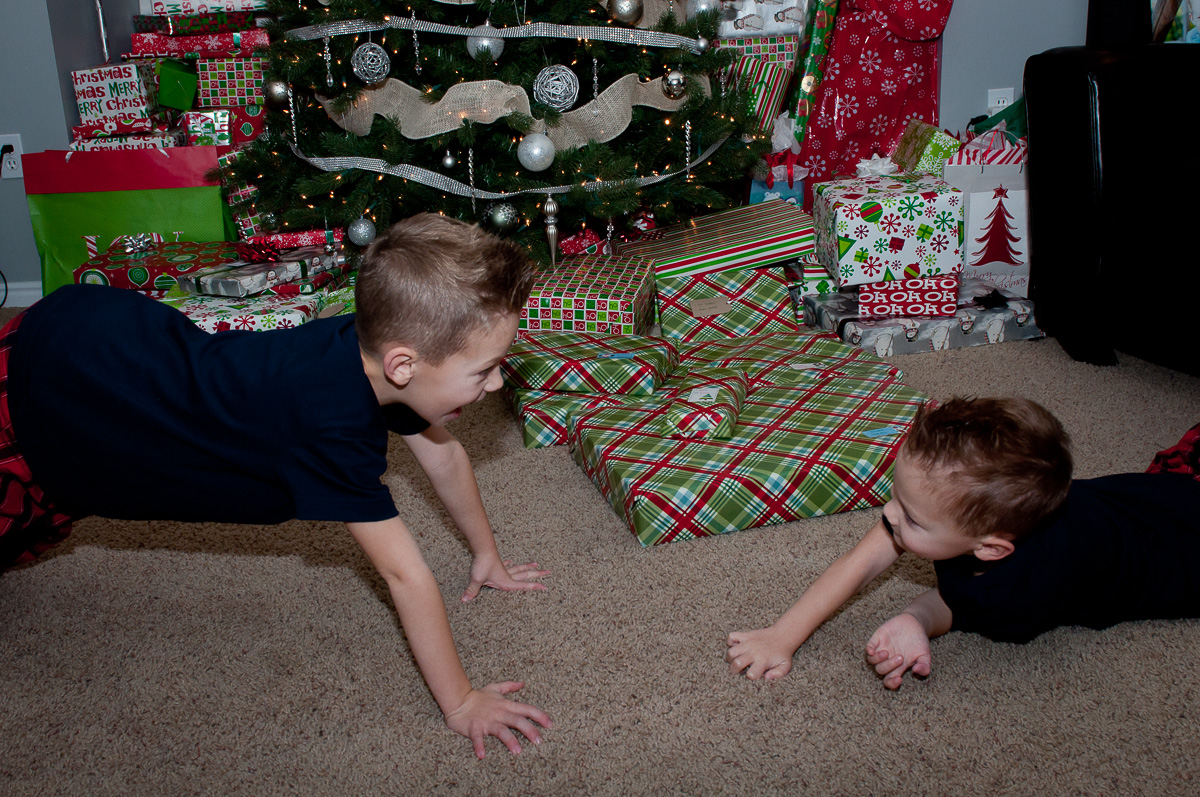 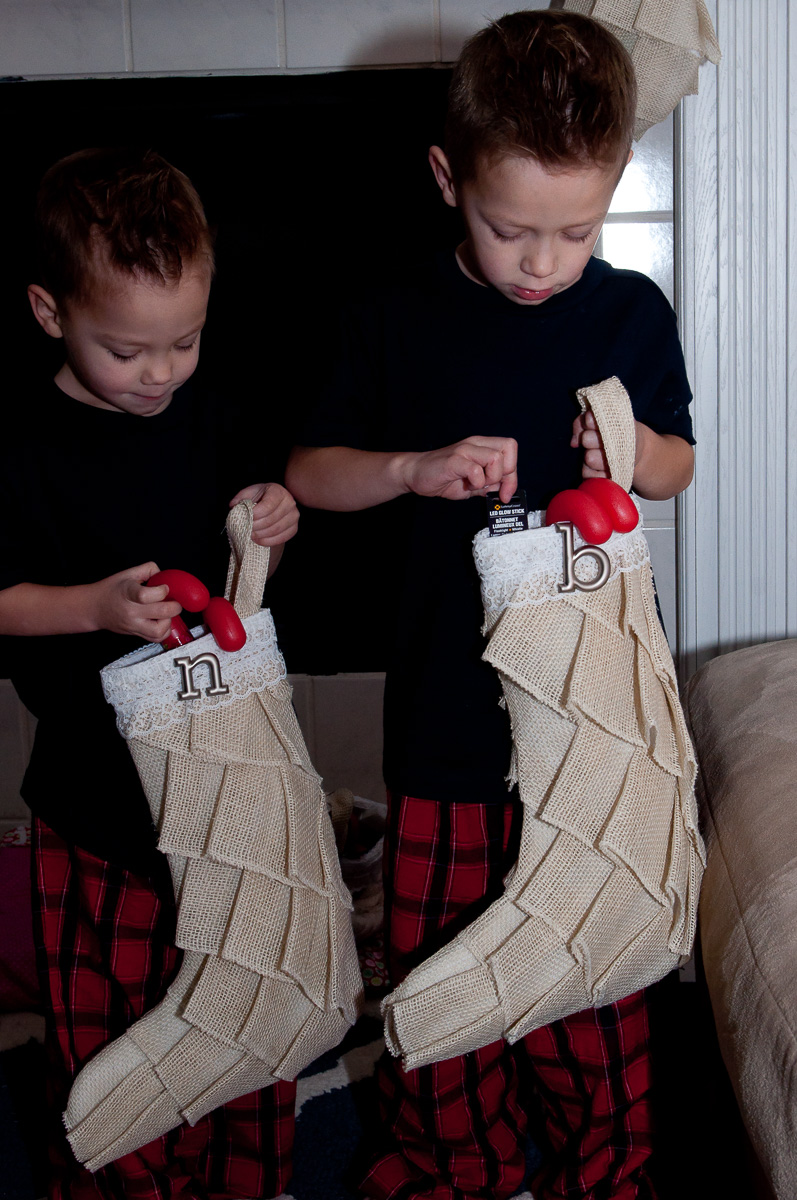 Nash had his heart set on one present. 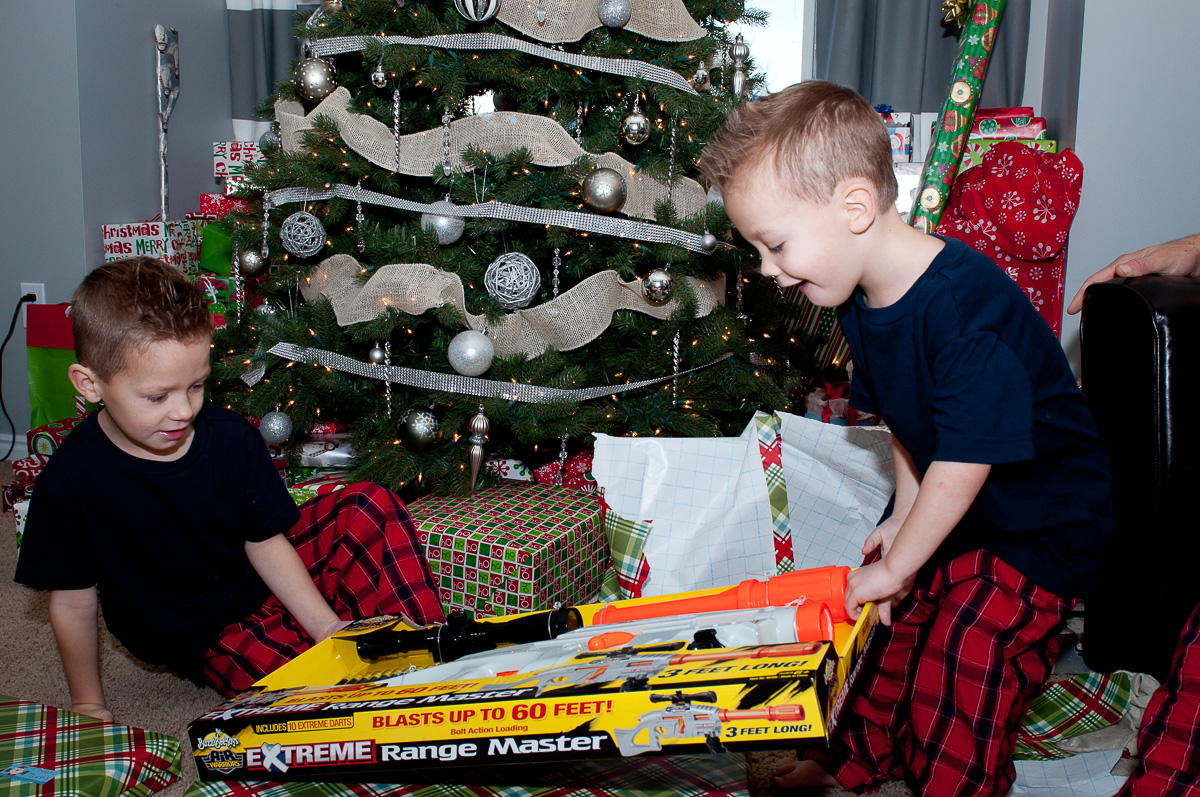 I took him to the toy aisles at Target a few weeks before Christmas because he wasn’t giving me any gift ideas.

He immediately spotted a gun that was the same size as him, pulled it off the shelf, and plopped right down with it in the middle of the aisle. He pumped and loaded the gun and made shooting noises while it was still fastened to the box.

From that day forward, he told everyone, including Santa, that he wanted a “shooting blaster” for Christmas.

When anyone asked him what a shooting blaster did, without hesitation and with his head titled to the side in a cocky manner, he replied, “It blasts stuff.”Oh man. How did I get such a boy? I was the one who vowed never to allow toy guns in the house. But when Nash turns everything imaginable into a shooting device anyway, I couldn’t resist the look I knew would spread across his face when he opened the gun on Christmas morning. 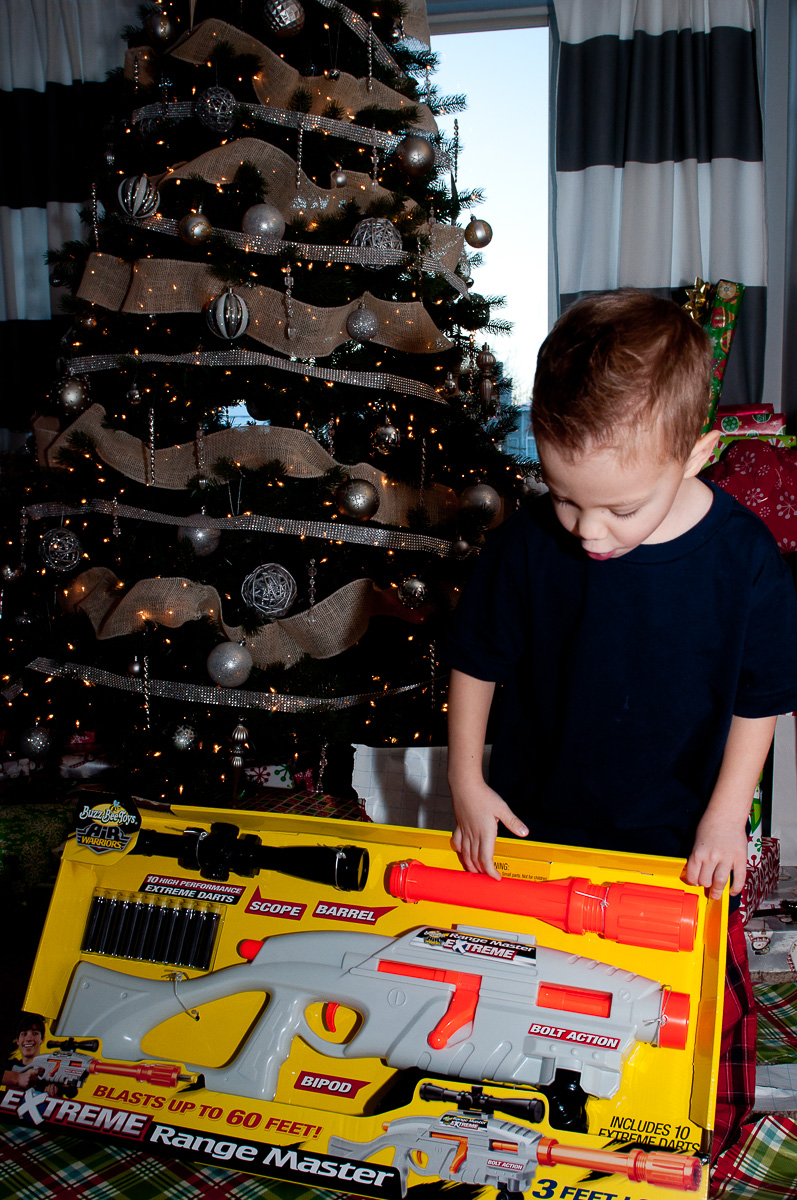 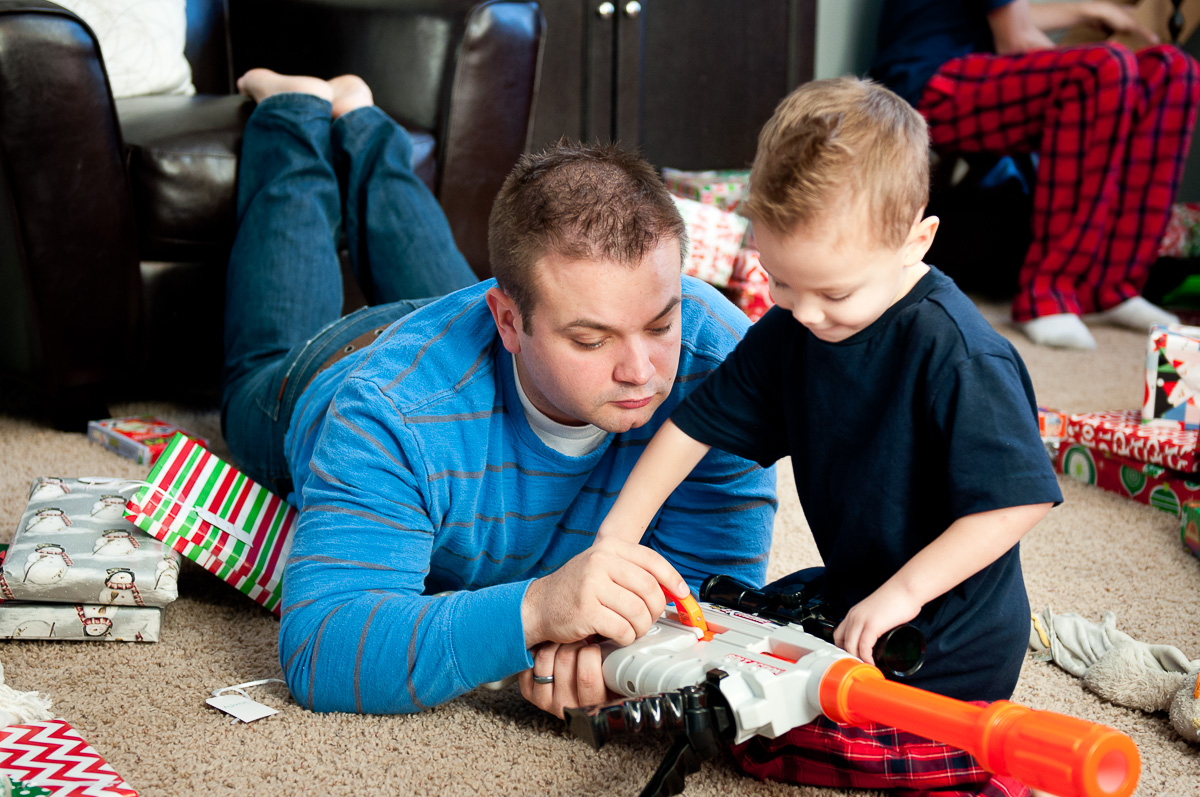 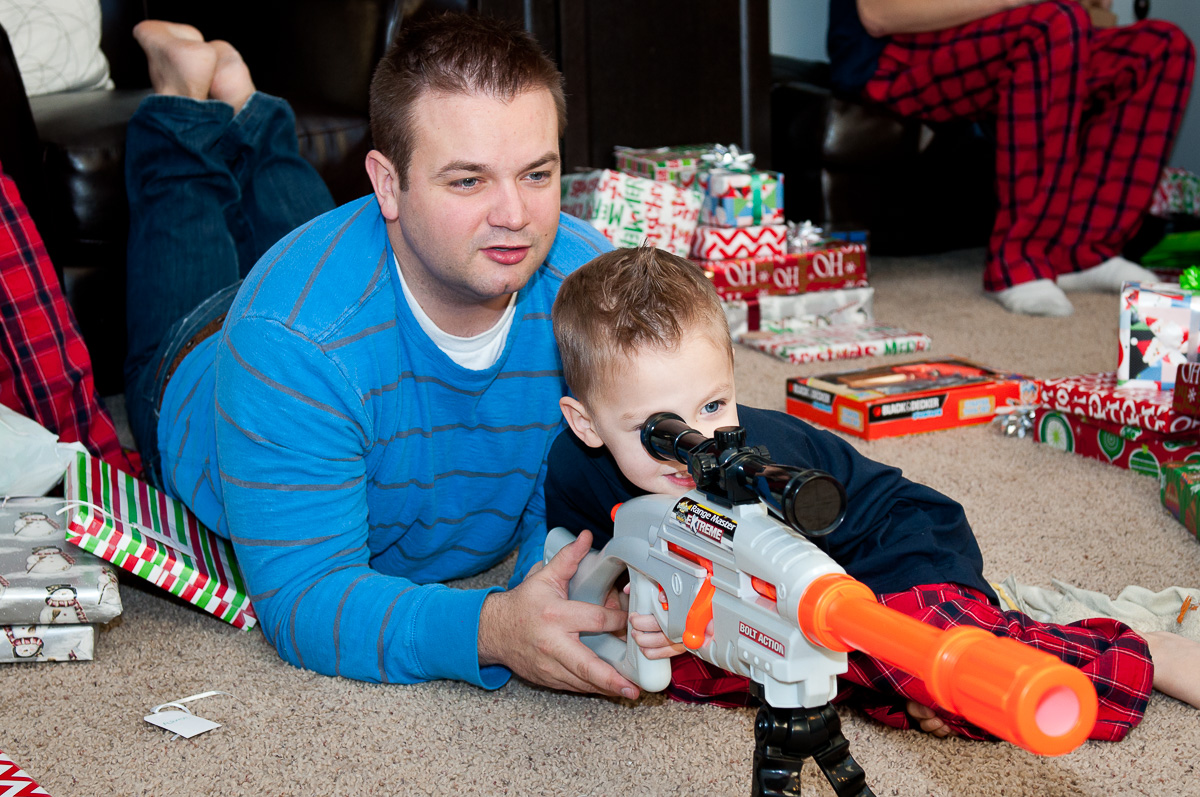 Blake was pretty ecstatic about what Santa brought him as well. 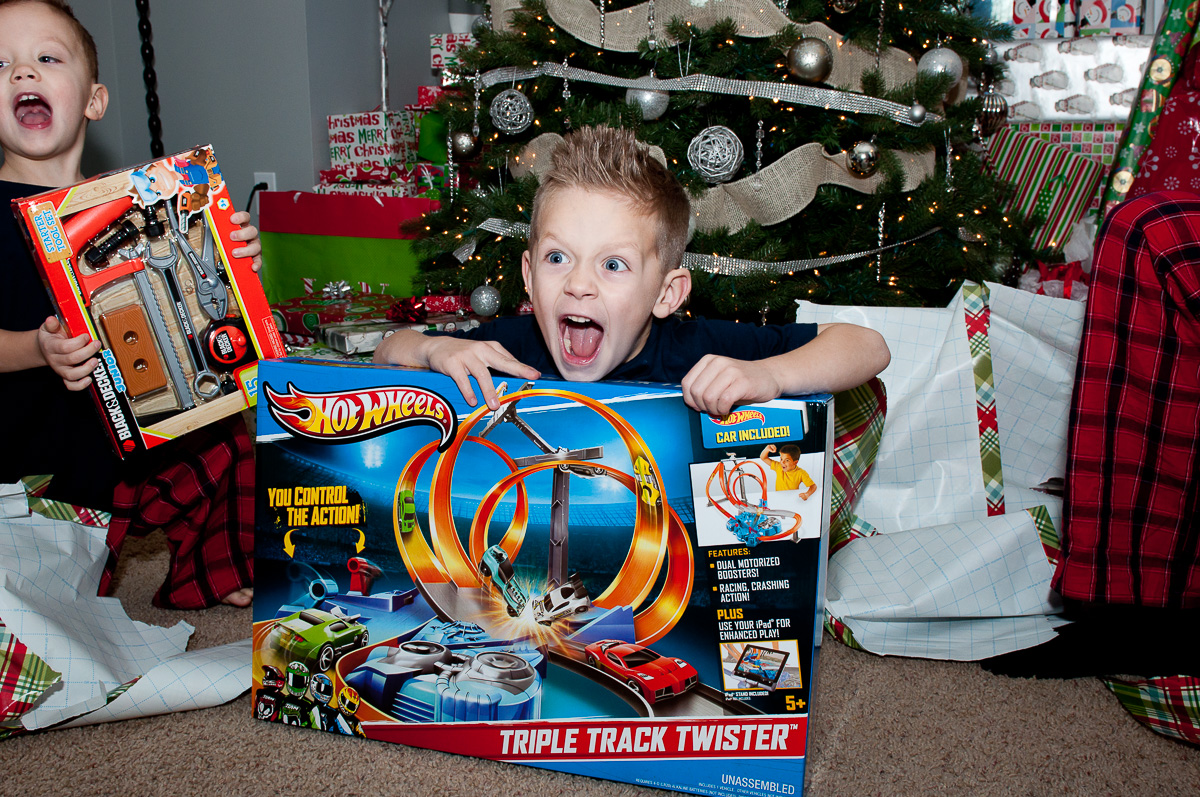 And Crew? Well, he was mostly happy just to play with the wrapping paper and boxes. He rather enjoyed being caged in my new little table as well. 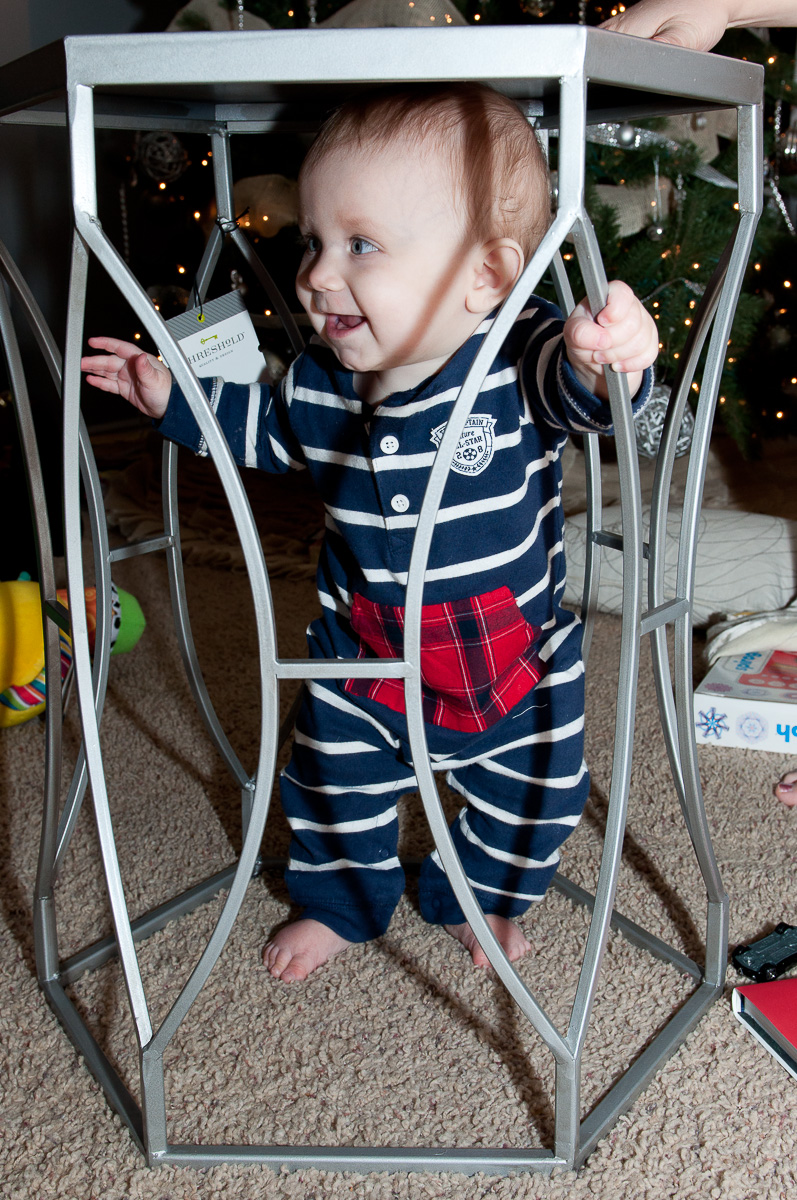 Now that the chaos that made the whole month so stressful is over, I’ve been trying to step back and see the beauty of what actually happened. The nights where we were absorbed in Christmas stories with the tree lights all aglow in the background. Receiving treasured photos and letters from friends and family in the mailbox each day. Discovering the magic of Christmas all over again through my children’s eyes. Holding to our traditions even when it didn’t seem like we could possibly fit them in.

Somewhere in the total mess of candy and frosting and presents and meals and the general hoopla of lots of family together, the Christmas air thickened around us.

In 20 years from now, when all I hear in my empty house is the soft Christmas music that I so long to hear above the noise these days, I’m sure I’ll miss our little ones pulling at my legs with stars in their eyes.

And as much as I have grown to despise all the work that must go on behind the scenes to pull off Christmas, I am also grateful for a season that brings families together and that ignites endless excitement. Life would be pretty dull without cause for celebration.

Most of all, I’m grateful to celebrate the babe of Bethlehem, the Savior of the World. His power is the realest real magic.