Skip to content
Troy figured we better include the boys in some of my birthday celebrations because they get more excited about birthdays than anyone. Especially considering they were completely left out for the first few phases.
In fact, Blake in particular was devastated when the limo pulled away without him in it. He declared it to be the most awesome car he had ever seen.
With tears rolling down his cheeks, he asked his dad, “Why does mom get to have all the fun?”
Troy answered, “Well, this is a big birthday for mom, she’s turning 30.”
Blake replied, “30 isn’t a big birthday, it’s just a ten birthday.”
Troy responded, “Ten birthdays are big birthdays.”
Blake asked, “So, when I turn ten, I get to ride in one of those cars?”
Troy said, “Well, no. I didn’t ride in a limo until I was 16 and I went to this fancy dance called prom.”
Blake exclaimed, “But 16 isn’t a ten birthday!”
Ha! We tried to make amends by going to out dinner with the whole family on my actual birthday. We decided to walk around outside afterwards while Troy picked up a few cupcakes for the boys’ sake.

The boys spotted the water fountains in a matter of seconds. Immediately upon seeing their eyes widen, we declared that we were only going to look at the fountains. We would not be running through them.

Once they had quickly run through a few times and only had a few spots of water on their clothes, I thought, why not just go for it? A little water never hurt anyone.

We let them get drenched, fully clothed, to their hearts’ content.

Sometimes I think you have to live in the moment and embrace childhood, regardless if it will make your carseats wet or push bedtime back.

They had the time of their lives.

We took off their sopping wet shirts and Troy picked up a towel at a nearby store to at least attempt to dry them off.

In the end, my birthday celebration was a night they’ll never forget.

On the Upswing to Thirty 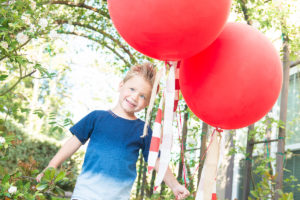