Skip to content
For the first time in seven years, we had to break our fall tradition and try out a new pumpkin patch. I was picky. It couldn’t be in a mall parking lot. It had to have a corn maze. It had to be an authentic patch with rows of pumpkins. Thankfully after a little research, SoCal didn’t disappoint and all of my pumpkin patch dreams came true.

A certain someone sure is doted on.

Nash got in a fight with a bear on the way in.

Okay, not really. He fell off his dresser (where he sits to play with LEGO bricks so his brothers can’t destroy them). He somehow landed wedged between his dresser and wall and his eye took the worst of the fall.

You’d think the seven year old would be the most cooperative. Not so much.

Of course, once dad was behind me they were all smiles.

The tractor was an added bonus.

Love that little onlooker on the bottom.

Crew was excited about the sheep he spotted.

Last but not least, especially since it was one of my “requirements,” was the corn maze. The boys played rock-paper-scissors to determine which way to turn.

And then some Eeny, Meeny, Miny, Moe as well.

Troy and I lagged behind with Finn while the others sprinted in circles.

I think I might dare say that this patch topped the one we went to in Utah for seven years. It was exactly the type of fall ambiance I was looking for, even if palm trees were still within our view. 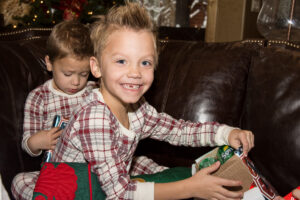 Christmas Morning at the Cabin