My brother compiled some Christmas footage and I’m always so grateful for his captured moments that freeze time in a different way than pictures do.

I always want to remember this particular Christmas at my parents’ house in the desert. The year that despite a car accident on the way out, an infected cut under Finn’s nose and the stress of cramming in last minute gifts and wrapping, we were together and that was all we needed.

I want to remember how Blake smiled with pride about his two missing front teeth. How Nash was obsessed with all things drawing. How Crew loved climbing in the boxes more than opening them. How Finn was mostly crawling but beginning to take his first steps.I want to remember the last time the red elf jumpsuit was worn. It was passed down to each of the boys at Christmastime and Finn was the final recipient.

I want to remember the year that all of my children believed in the magic of Santa Claus, because I have a feeling it might be the last.

I want to remember the moments that made all of the chaos that swirled around during the month of December worth it. And now I can. Thanks, bro! 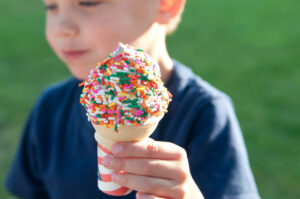 I Scream, You Scream