Exactly one week after Crew received his cast for his broken arm, we wound up in the hospital again.

Finn was on his typical two week rotation of coughing and wheezing but I didn’t think much of it because he is sick more often than not. We amped up the breathing treatments when his symptoms worsened but I wasn’t concerned he was in life-threatening danger. Although his breathing was labored, I had heard him sound much worse in the past.

Still, I was grateful that he had a well check scheduled the morning after his fever spiked so he could be examined. 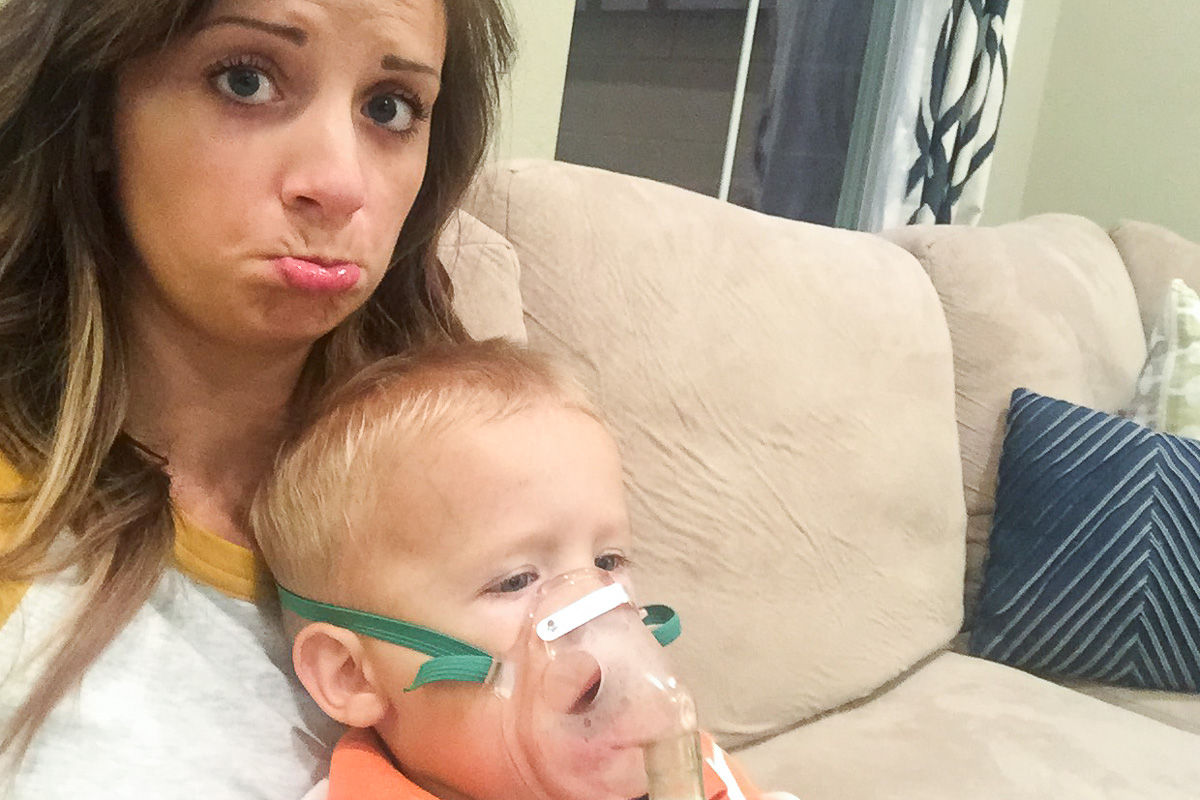 The minute we arrived at the pediatrician’s office, Finn coughed so hard that he vomited in the waiting room. The nurses took one look at his chest caving in and out and immediately sent us back to check his oxygen. When our pediatrician listened to his lungs and recorded his SpO₂ level, she determined that he wasn’t well at all. We would have to reschedule his well check because he needed to be immediately admitted at the children’s hospital.

His pulse oximetry reading was 86% which is extremely low. Anything under 92%, especially in a child, can be life-threatening.

We did a few breathing treatments at the pediatrician’s office and got him stabilized enough that I was given the clear to drive him to the hospital instead of having to ride in an ambulance. I made some phone calls to make arrangements for the other boys and we were on our way.

When we arrived at the hospital they had a private room waiting for us with a toddler crib set up. They hooked Finn up to a machine that would constantly monitor his oxygen. 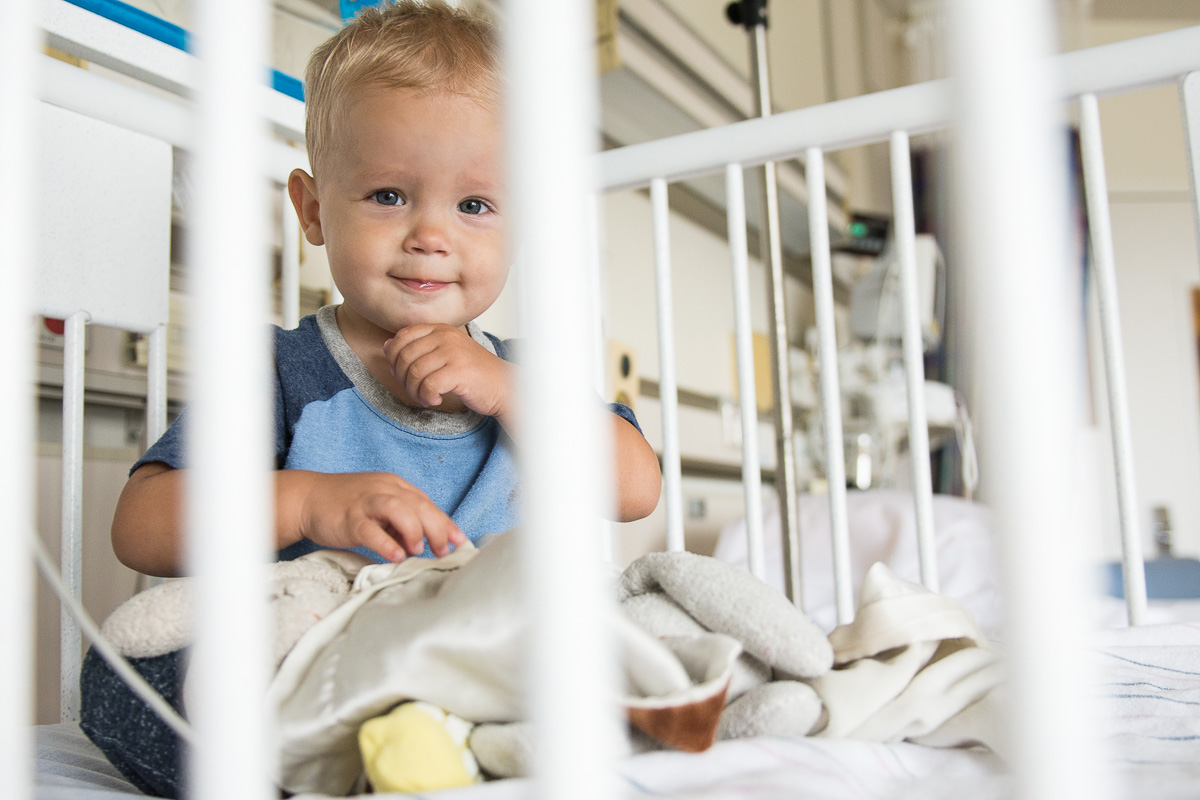 It’s a good thing we had his nie-nights with us because he had a long night of breathing treatments ahead of him and he needed all the comfort and familiarity he could get. 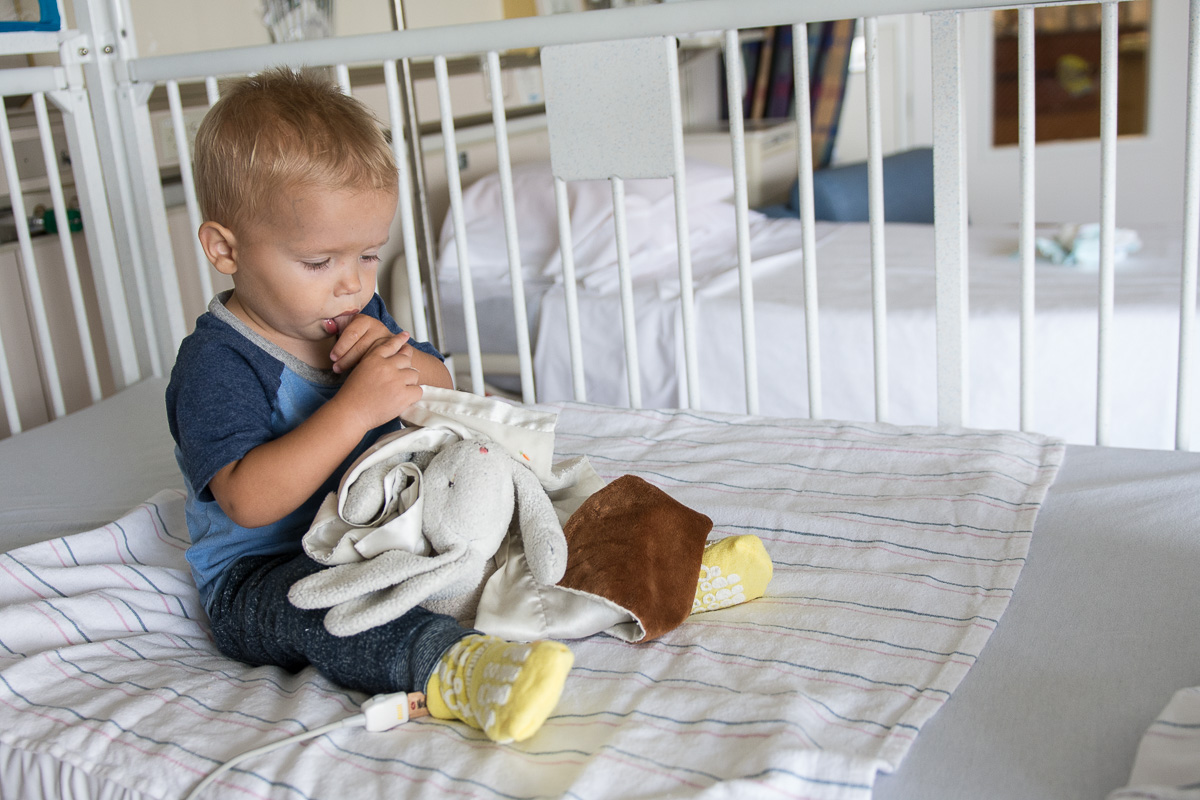 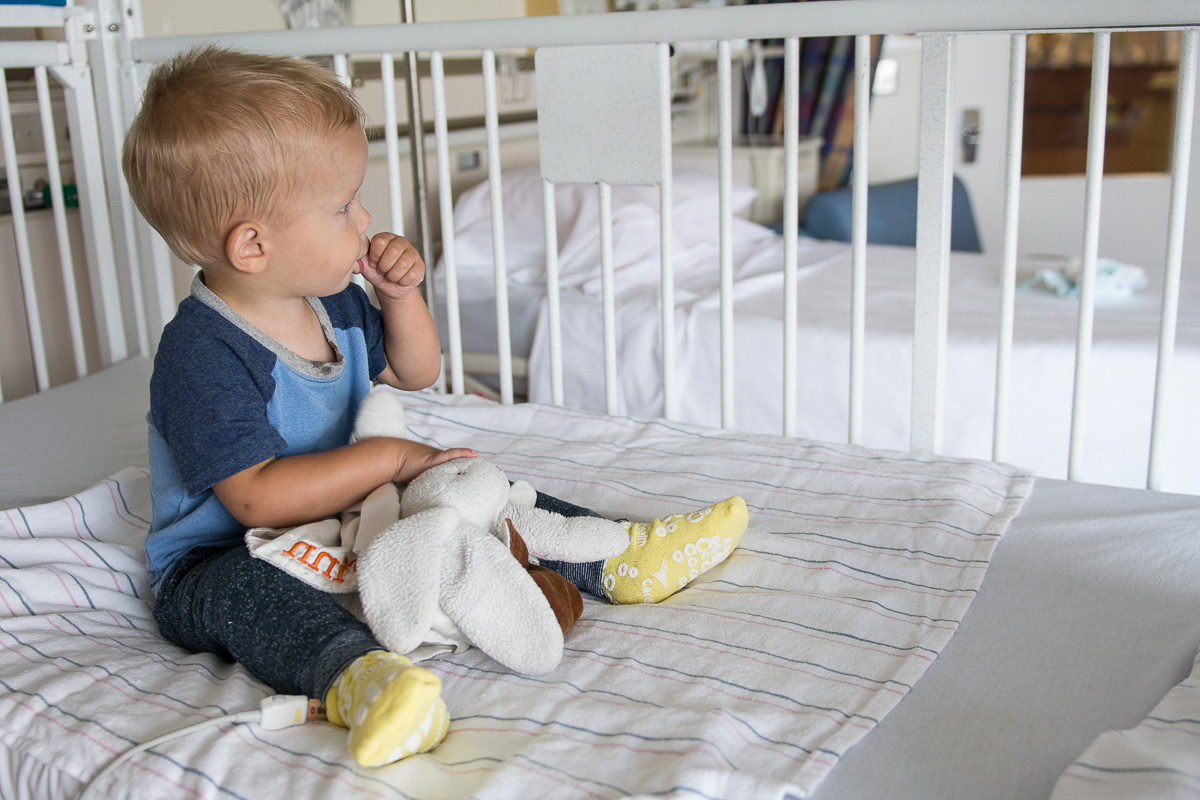 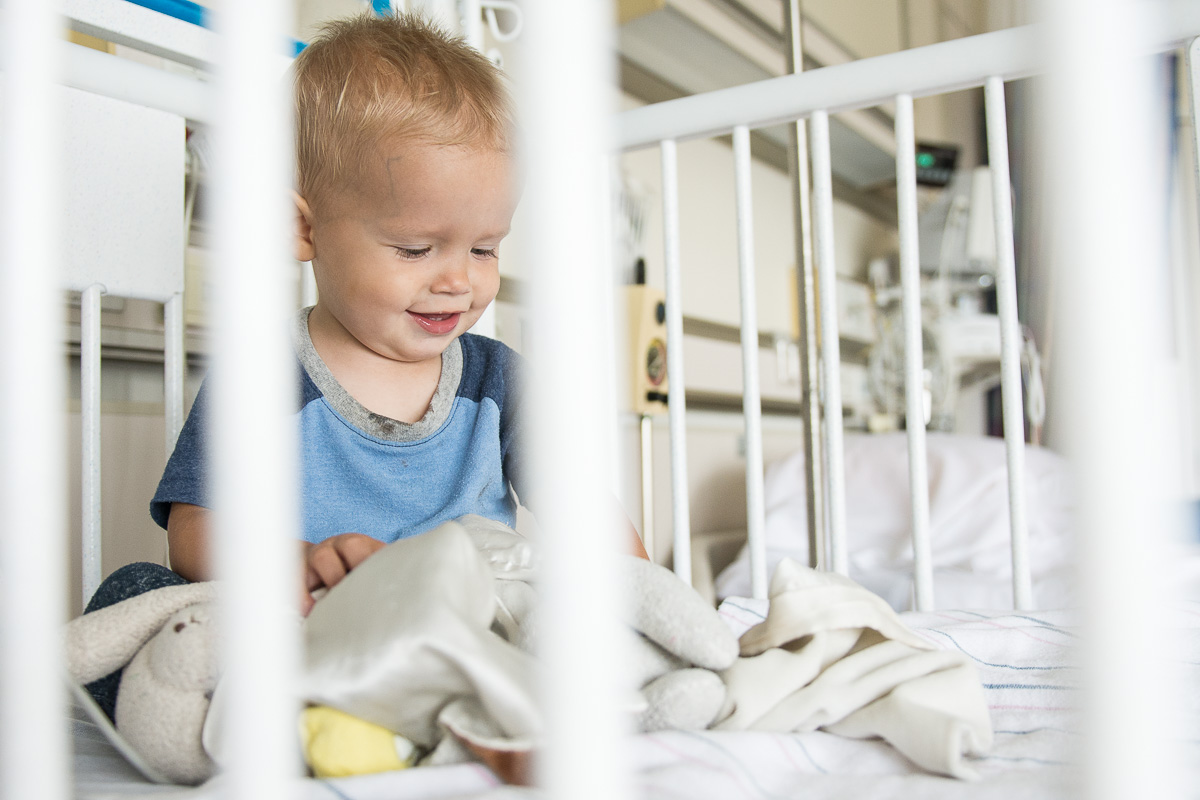 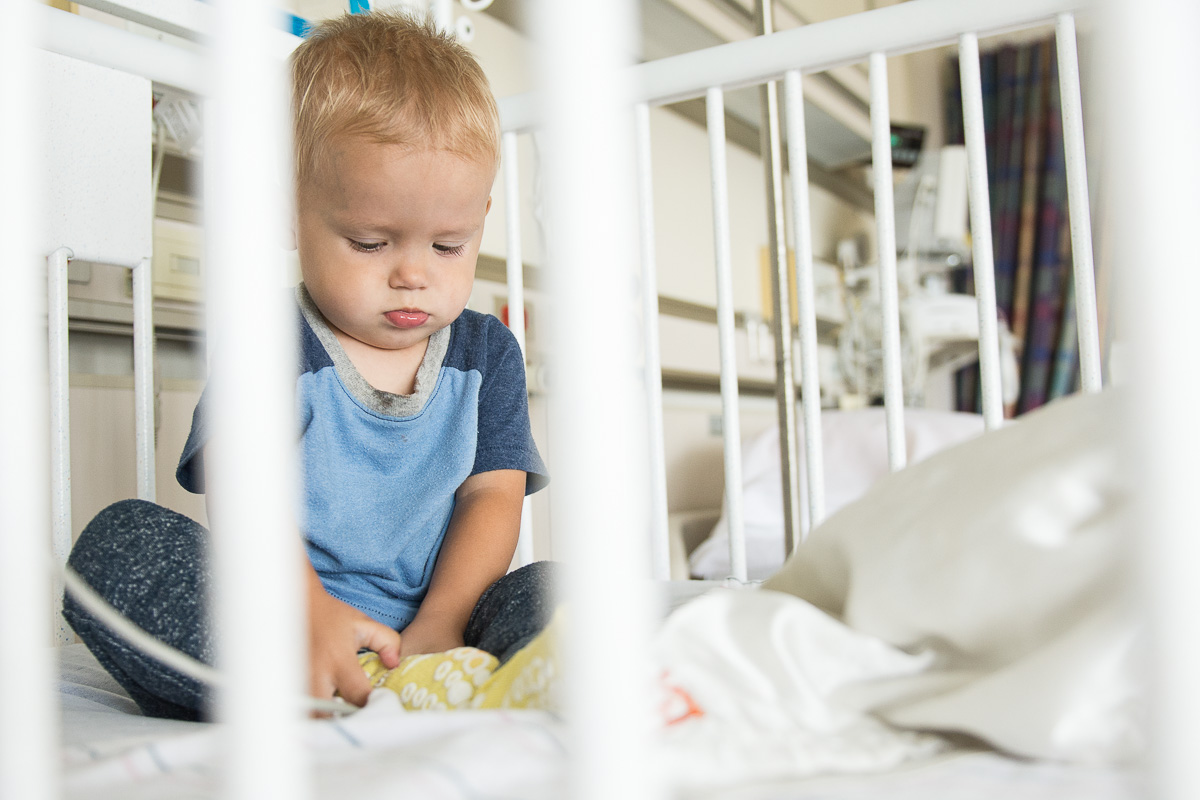 The volunteers from Ronald McDonald House brought in some toys for Finn to play with during the moments when his breathing was unassisted. We were grateful for the distraction but his movements kept knocking off the monitor wrapped around his toe and setting off the alarm. 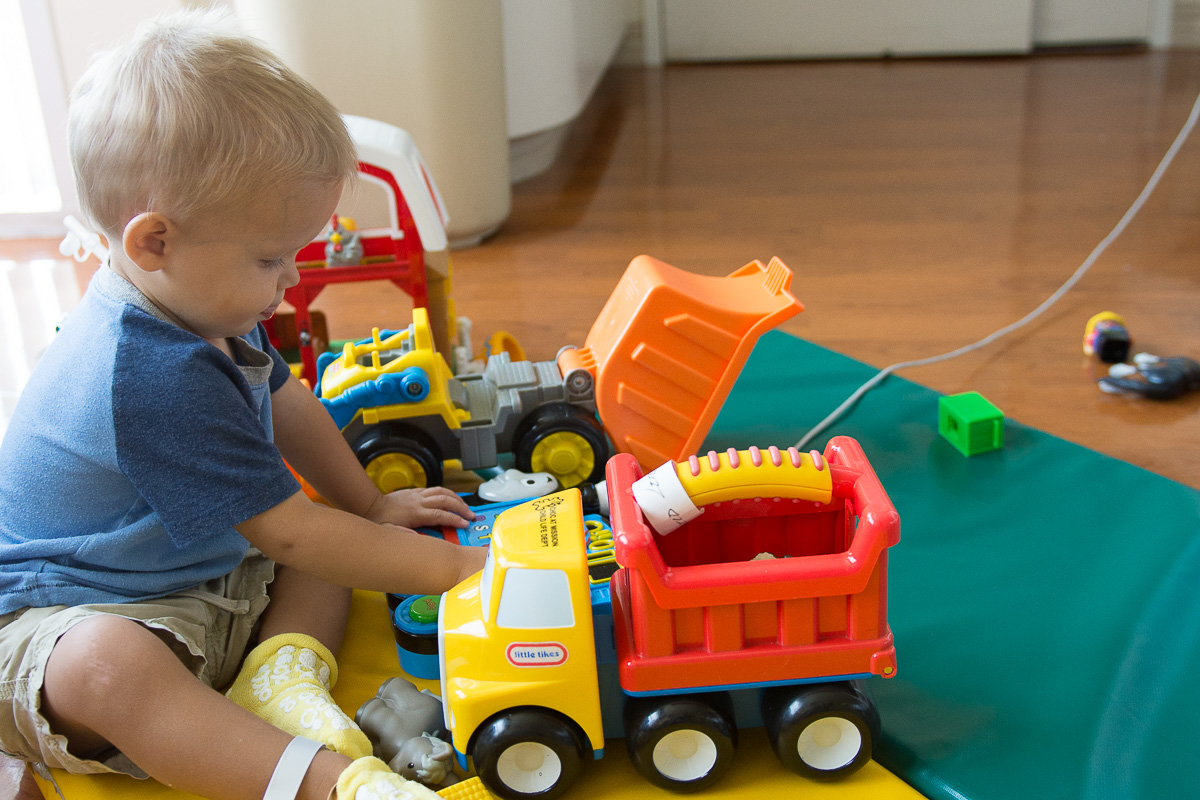 He was not a fan of being in a confined radius. 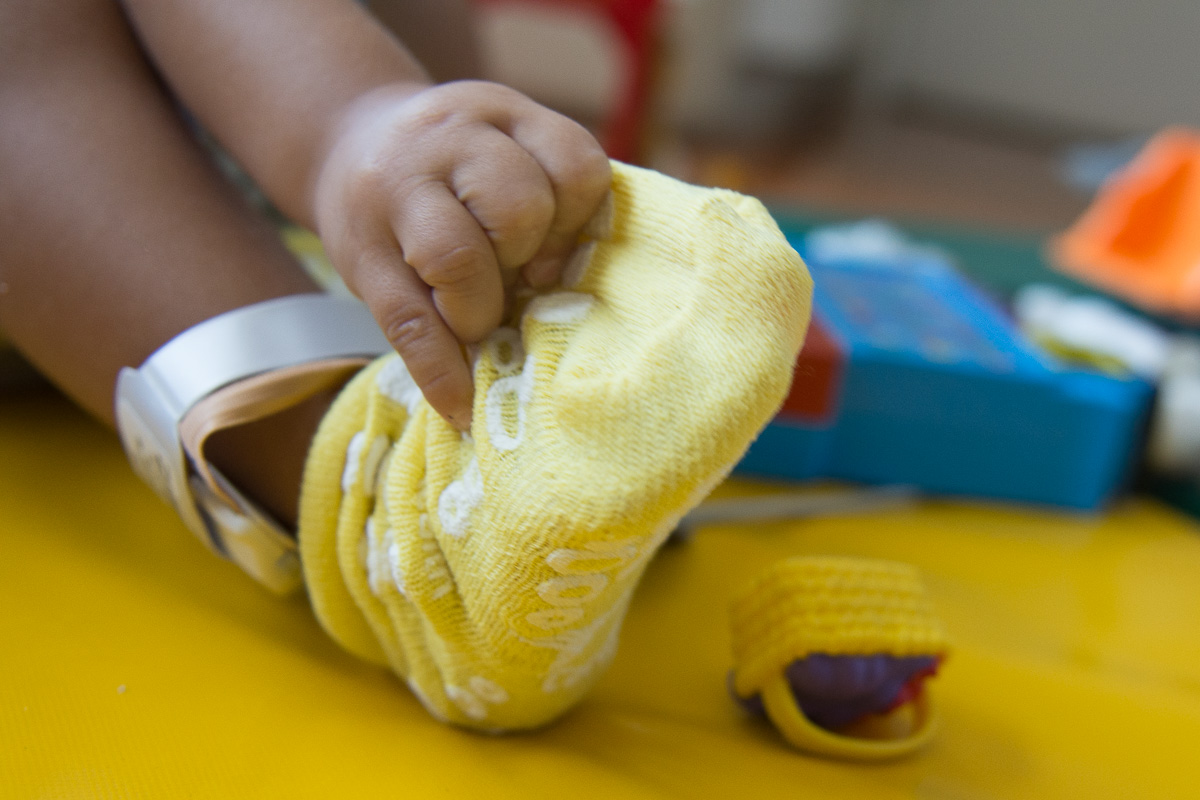 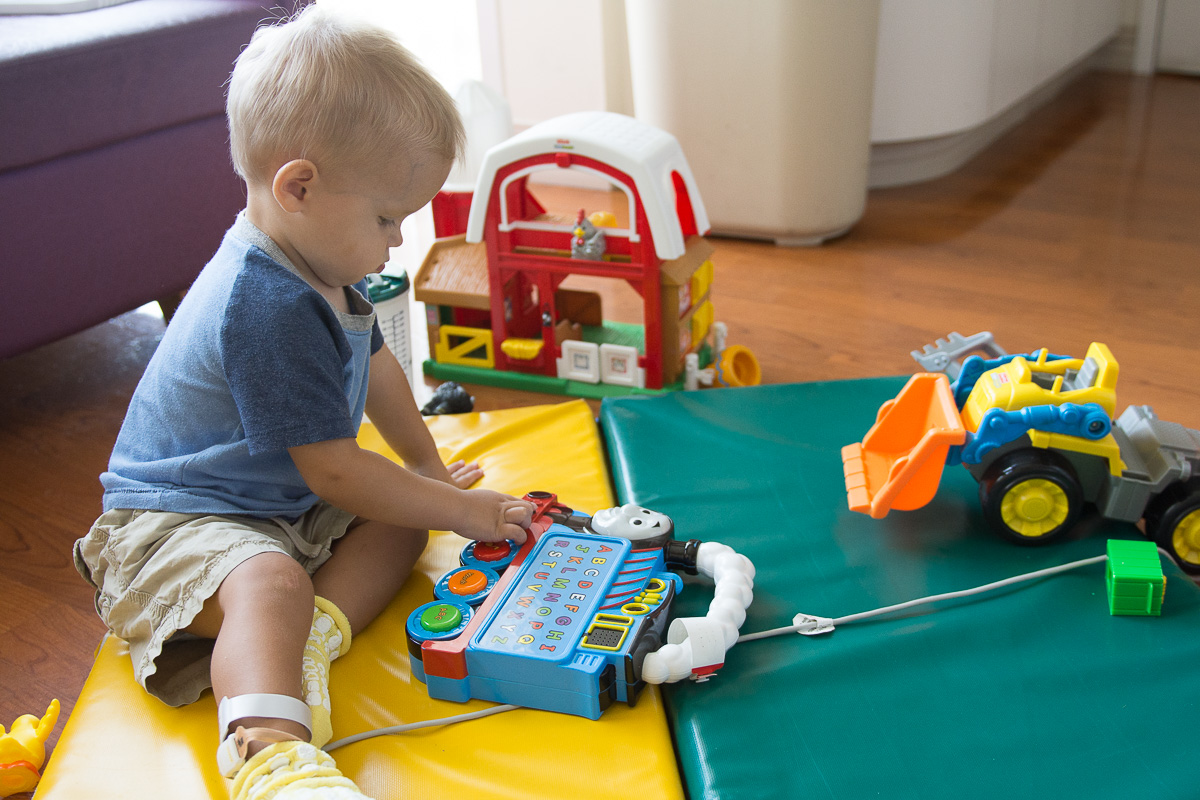 After spending all afternoon and evening at the hospital, we saw his oxygen level rise a bit but it dropped each time the albuterol wore off. At 88%, I knew they weren’t going to let us go home. We settled in for the night because oxygen tends to drop even more when sleeping. They ended up putting Finn in isolation, which meant that no children were allowed in the room and anyone who entered had to put on a mask and gloves. 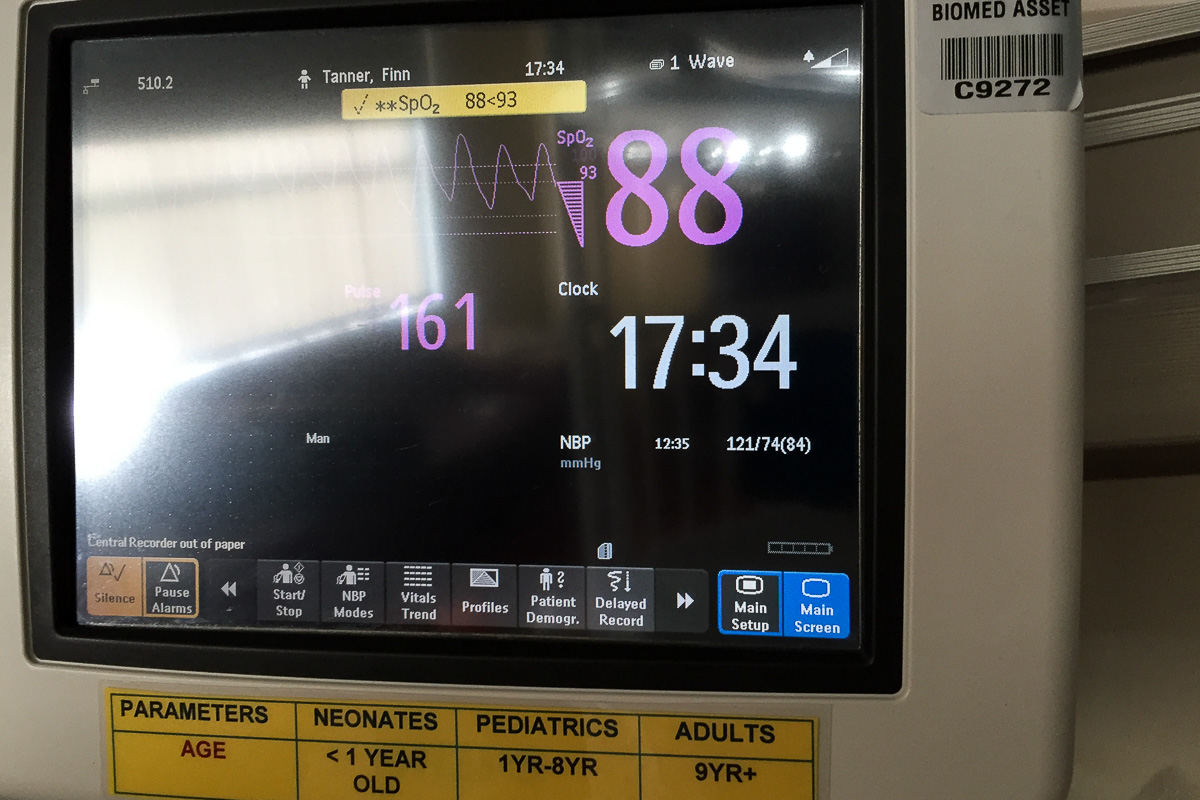 Finn’s SpO₂ dropped as anticipated throughout the night so they put him on oxygen in addition to his routine breathing treatments. It was a rough night. I had to crawl in the crib to lay down with him multiple times. He decided around 11pm that he was ready for a meal. Each time they gave him a breathing treatment it woke him up. And when he realized he had tubes taped to his face, he was less than cooperative. 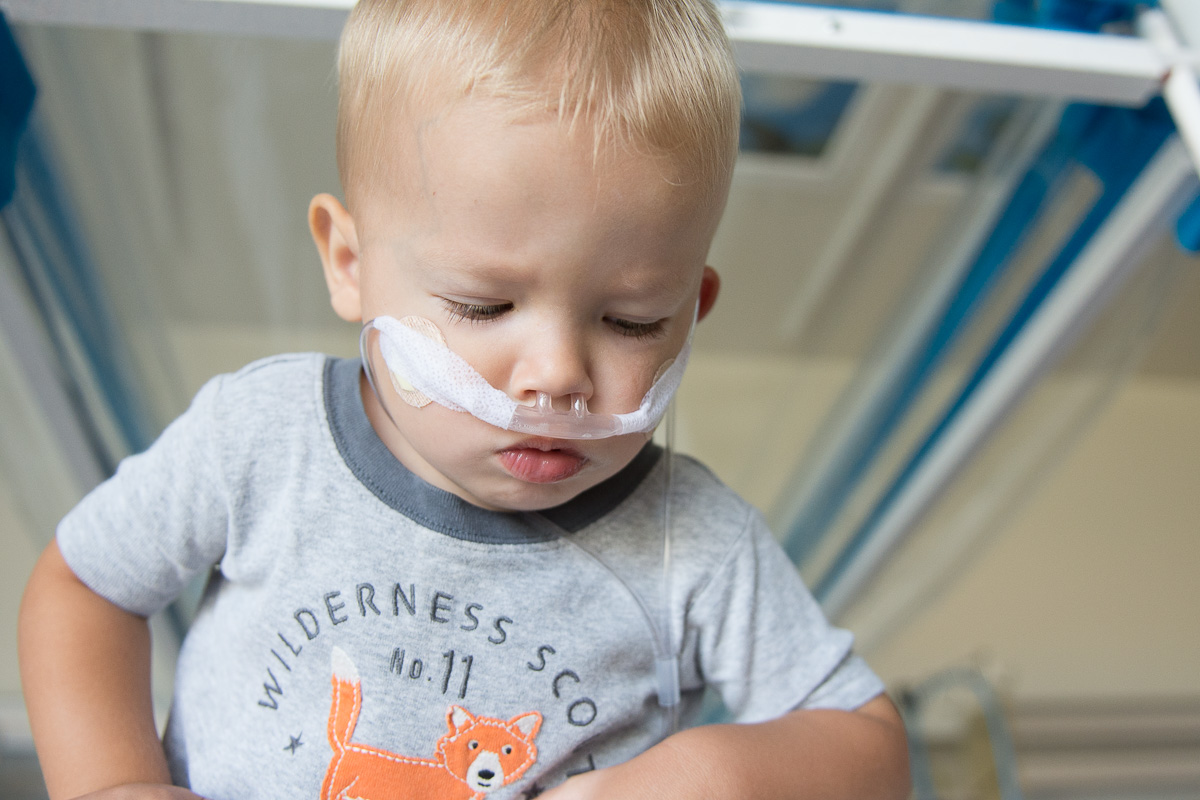 I went for about 24 hours with no food because somehow there wasn’t a system in place to let the parent leave the room. Troy couldn’t come take a shift because he had our three other boys and they weren’t allowed. I couldn’t exactly leave my two year old alone and they didn’t have any cafeteria meal delivery options. Finally after an entire day, I was in tears because I was so tired and so hungry. The nurse agreed to find a volunteer to sit with Finn for a half hour so I could run down to the cafeteria to grab some food. 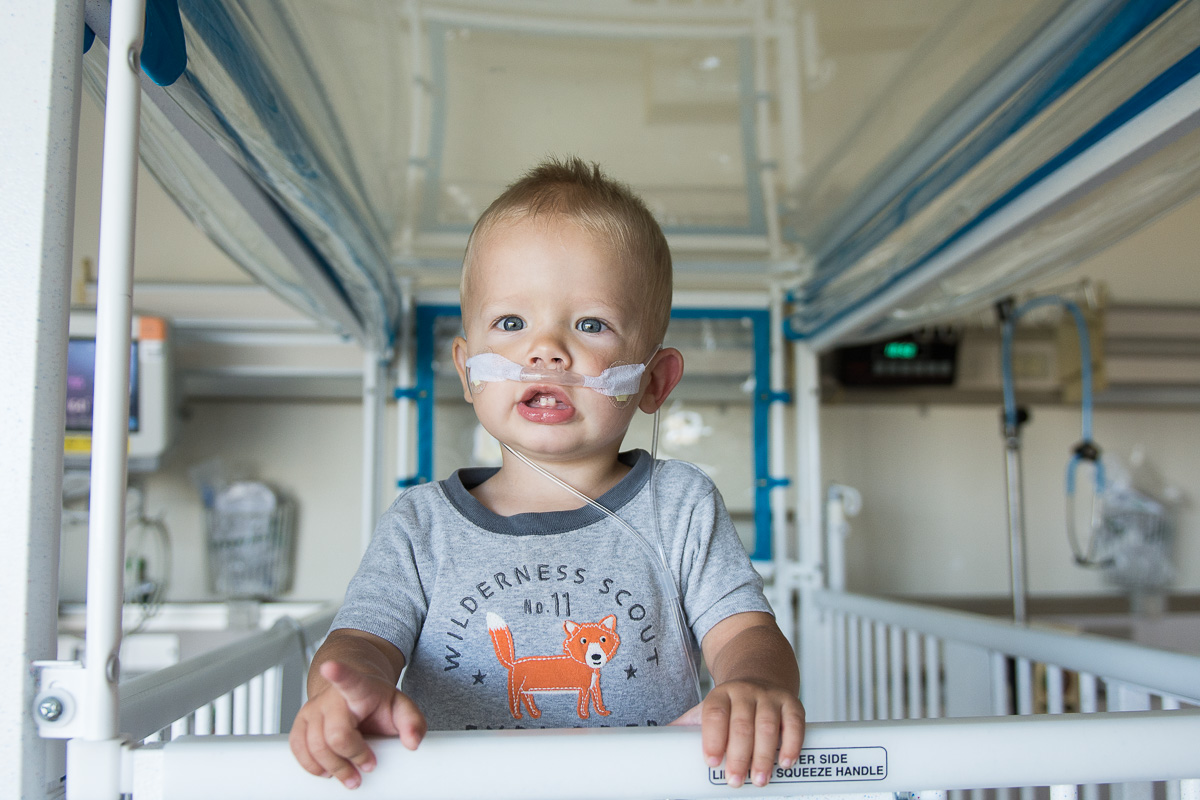 The good news was that after a night of treatments, Finn’s SpO₂ leveled out around 98-99% which meant that when the doctor made her rounds, we were given the clear to go home. 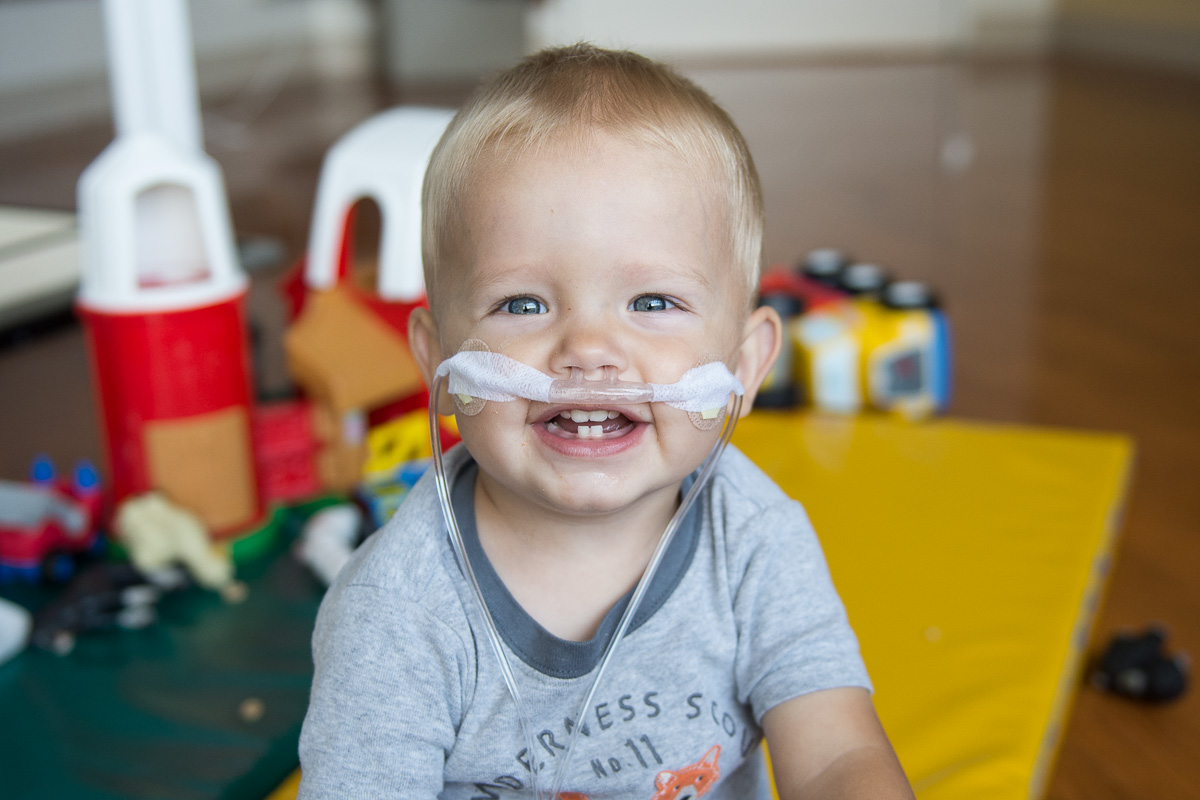 Finn was in much better spirits as his lungs offered him some relief. 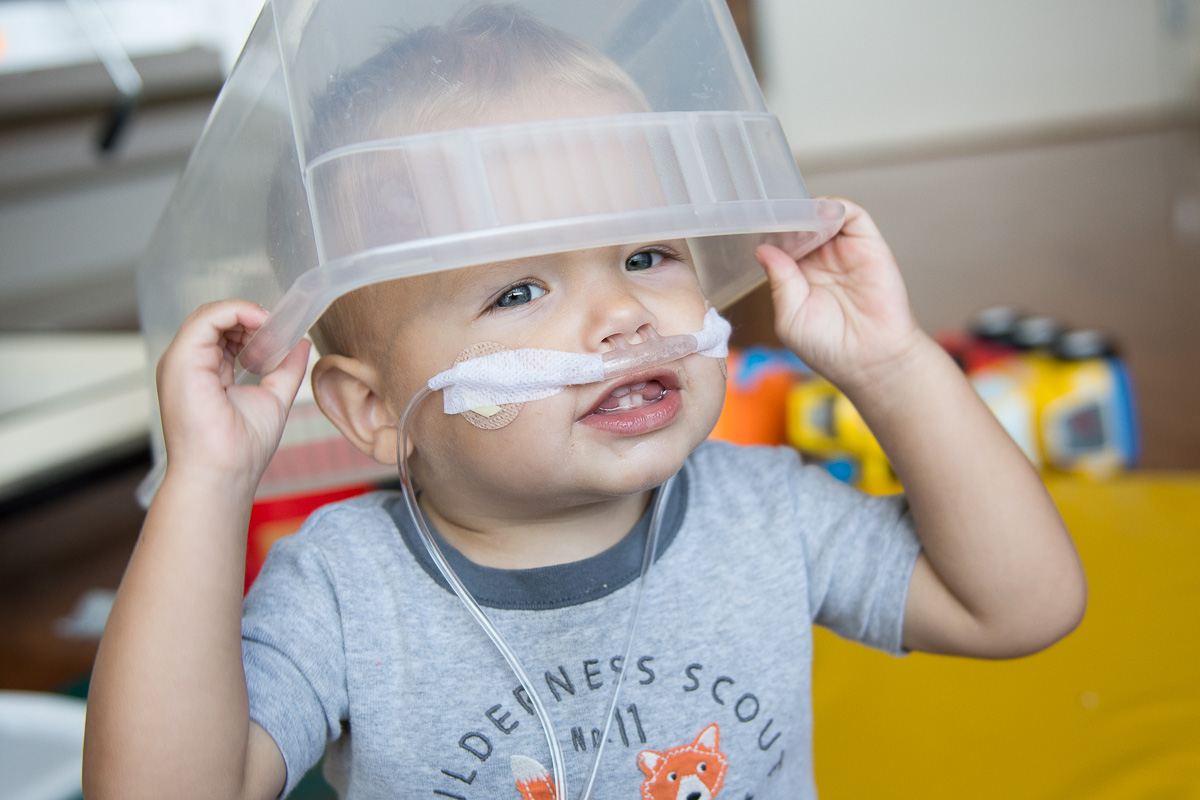 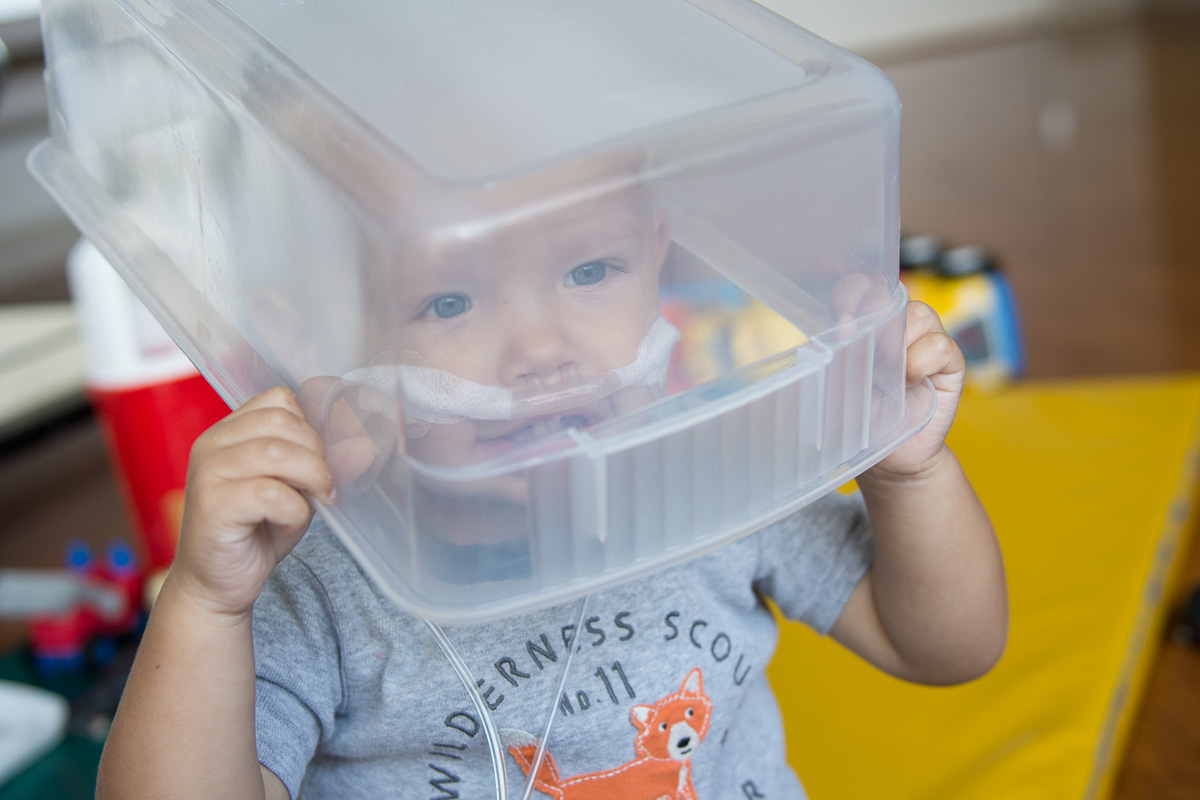 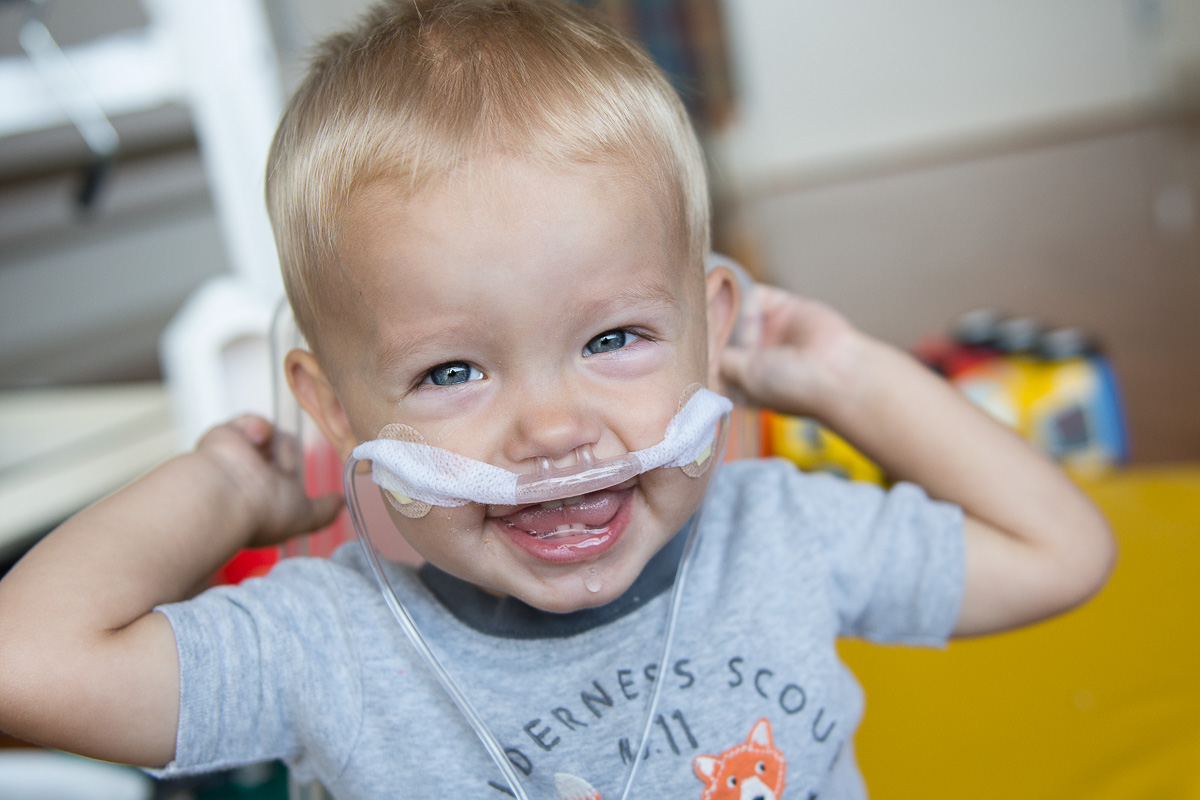 Thank goodness for that thumb to help us through a traumatic night. 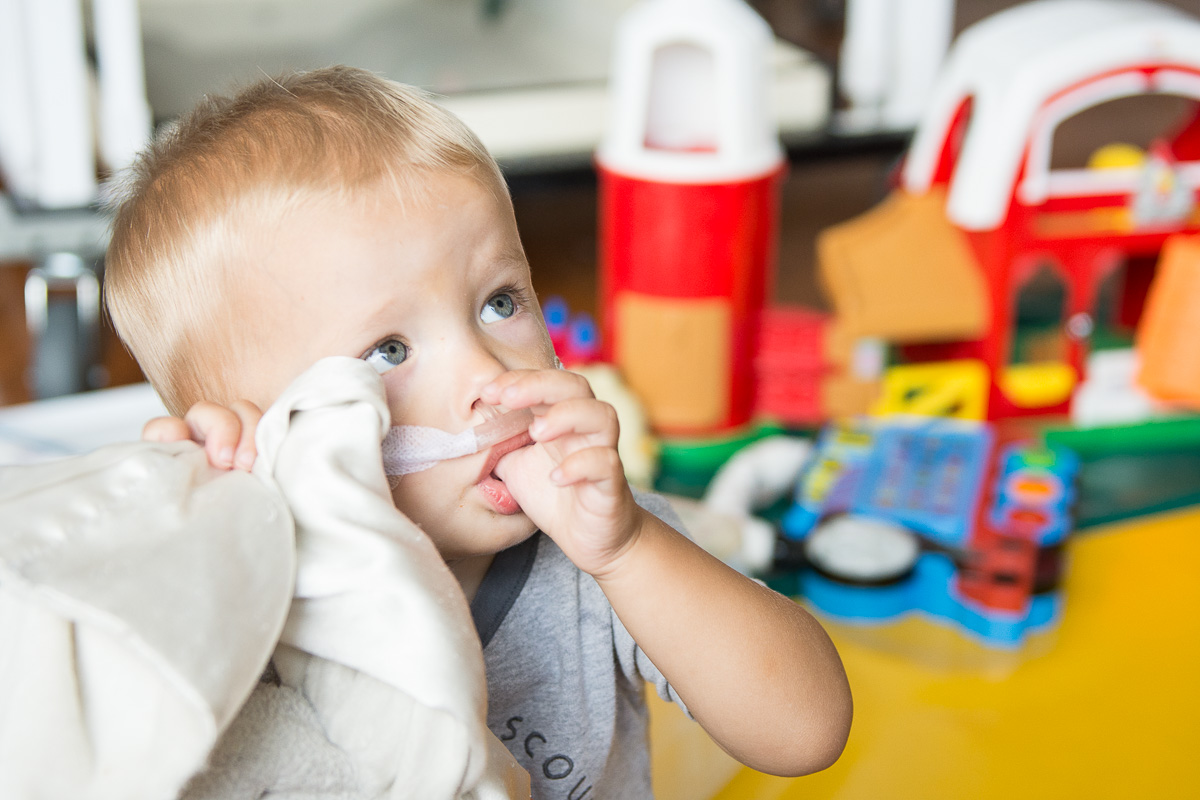 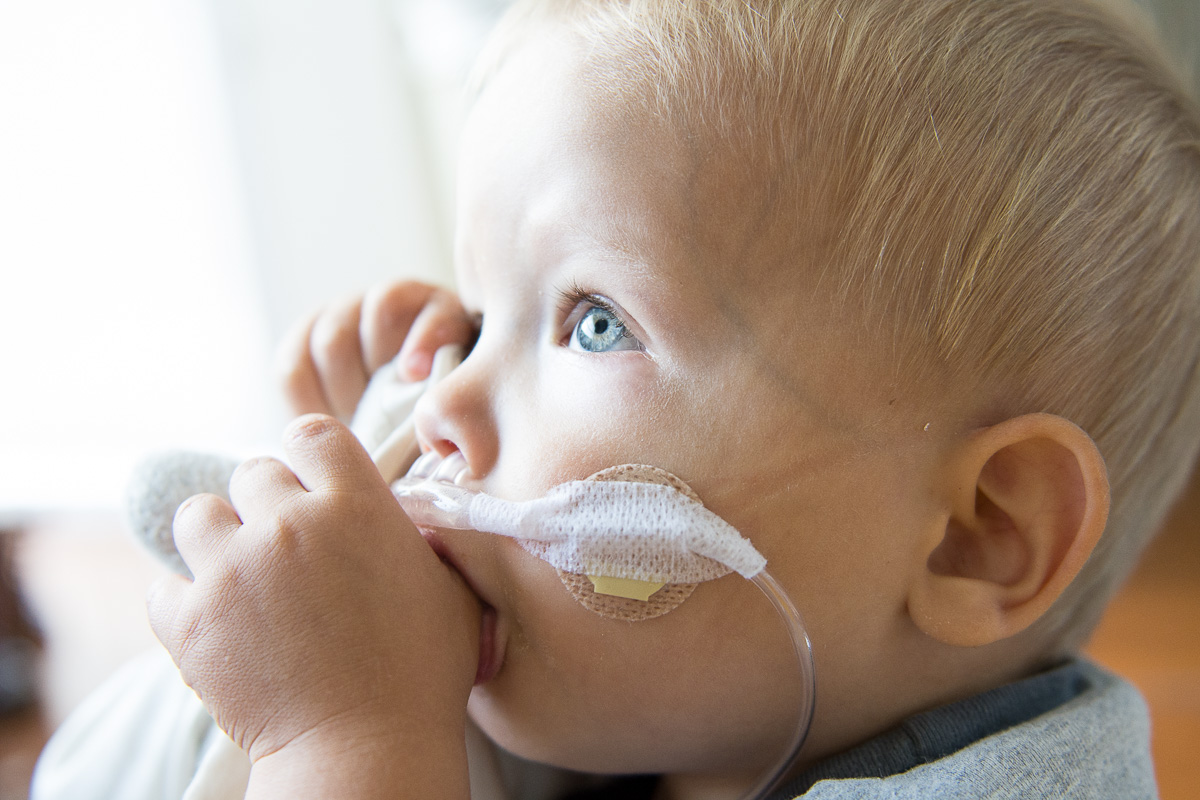 We decided to invest in our own pulse oximeter so we can measure Finn’s SpO₂ at home. It’s tricky to know when he is in danger and when he isn’t because he coughs and wheezes so frequently with his asthma. I brought him to urgent care and the pediatrician twice in the past when I thought he sounded worse. I was sent home both times with instructions to “continue breathing treatments,” so I wasn’t exactly rushing to the ER this time around. Now we can know for certain when his SpO₂ is low enough for action and when we’re okay to continue breathing treatments at home. We’re taking a more aggressive maintenance plan with daily steroid treatments to reduce the irritation and swelling of his airways, which in turn will hopefully help us avoid additional trips to the hospital.

Because as much fun as it is to sleep on a futon or in a toddler-sized crib with a two year old, I’d rather stay in a less-expensive five star hotel and eat regular meals.

I’m only half kidding. In the end, I’m so grateful for the doctors and nurses that made my baby well again. We feel so blessed to live at a time when our children can get the assistance they need to restore their breathing. That’s kind of an important thing for survival.