After we pulled ourselves away from the snow, wrapped up the remaining presents that I had shipped to the cabin and ate a delicious Christmas Eve dinner, we got in costume for our annual nativity play.The three oldest cousins took their roles as wise men very seriously. 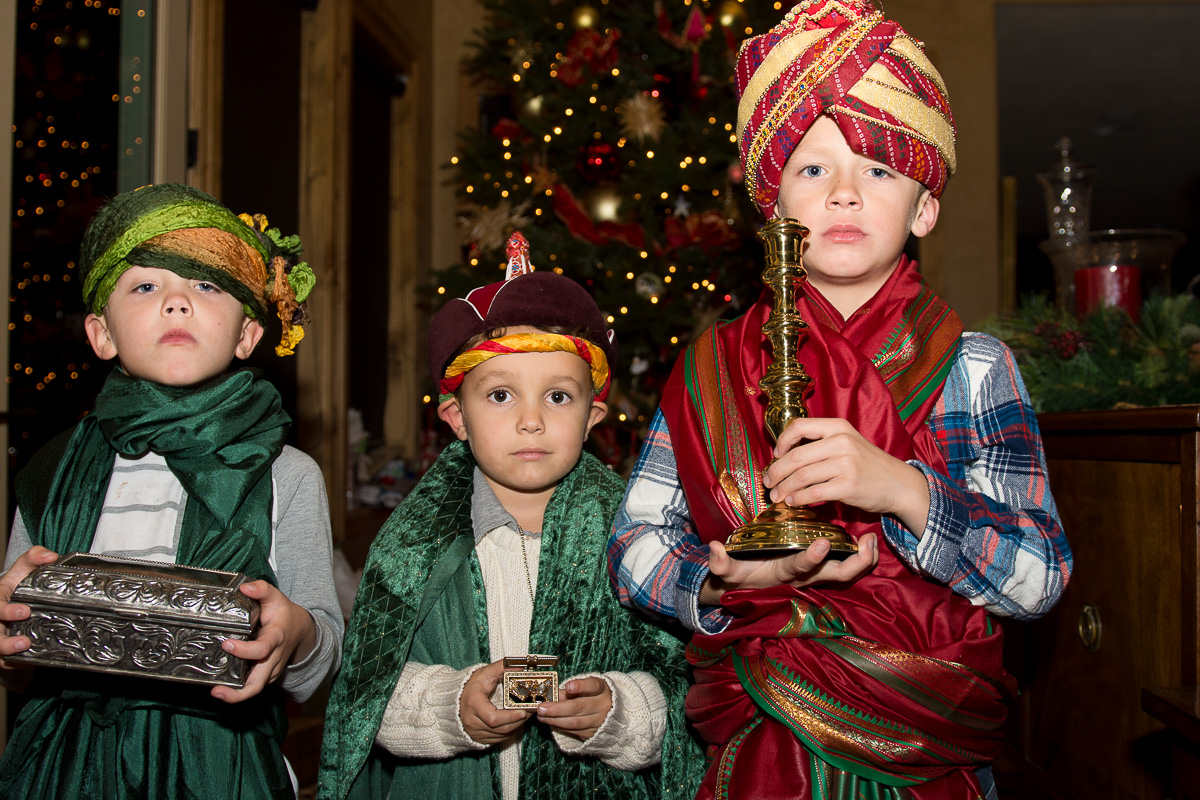 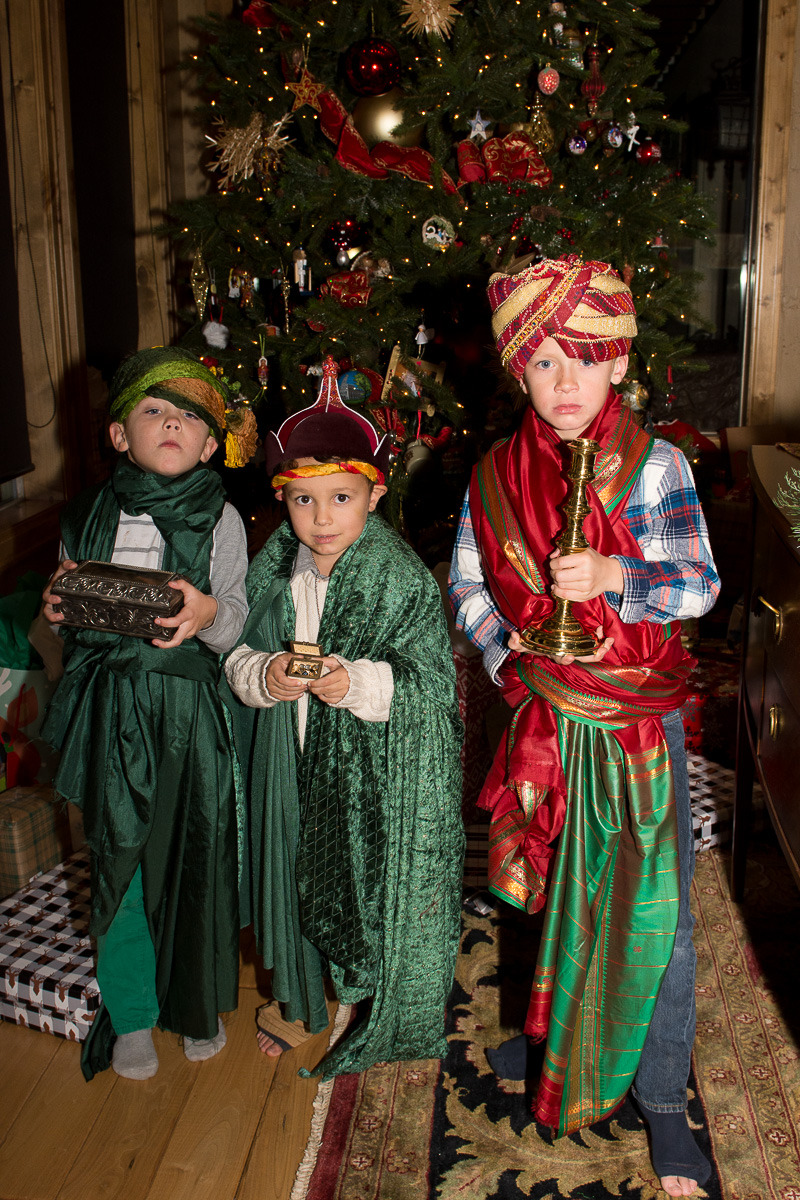 It’s always better when we have a real baby to play Jesus. 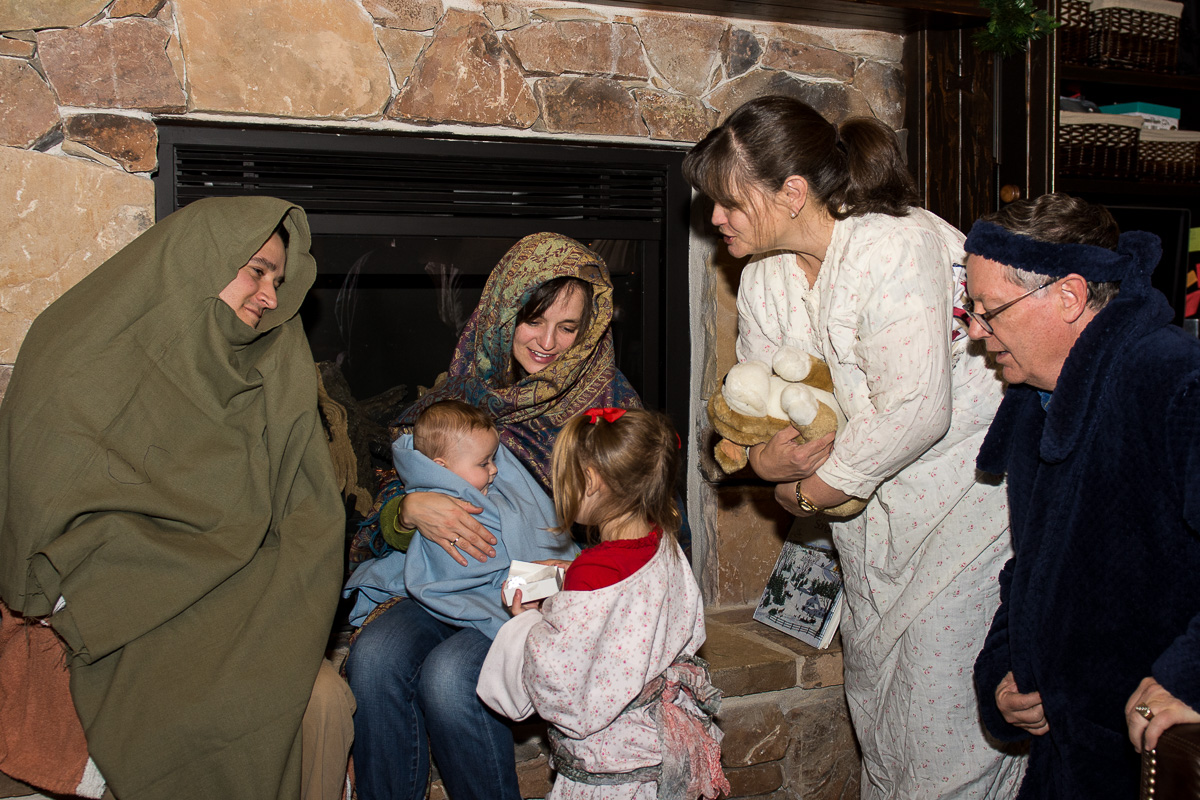 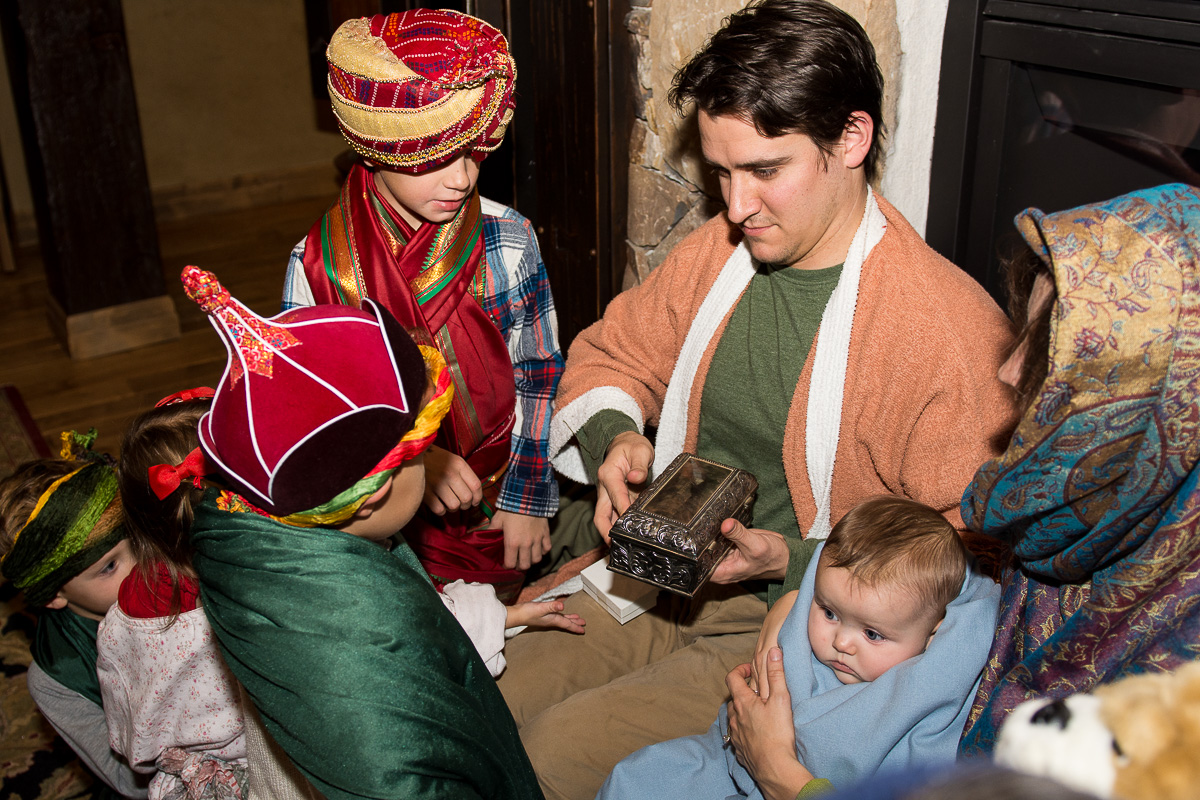 Troy narrated the story of the nativity this year and did just the right amount of paraphrasing to keep it moving. You never know what kind of production you’re going to get. 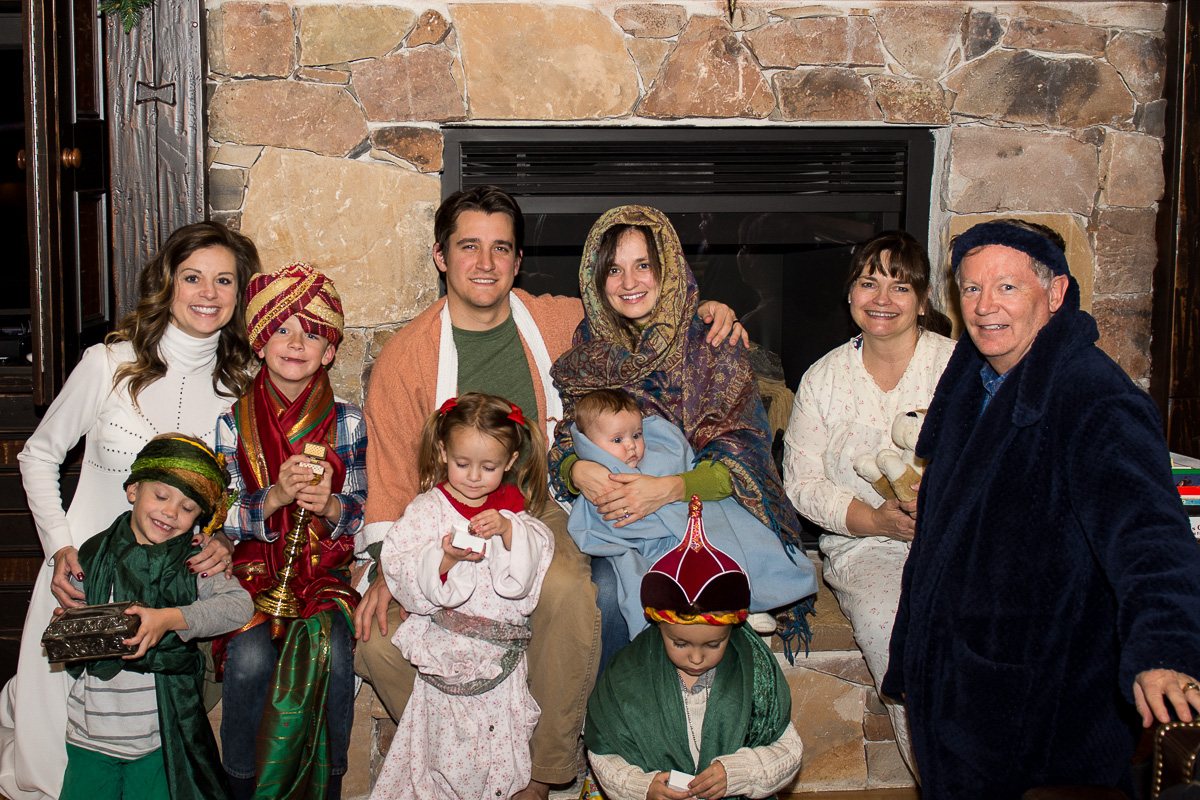 We tried to dress up Finn in a sheep costume which lasted approximately 1.7 seconds. He had a better time wrestling with his dad on the stairs. 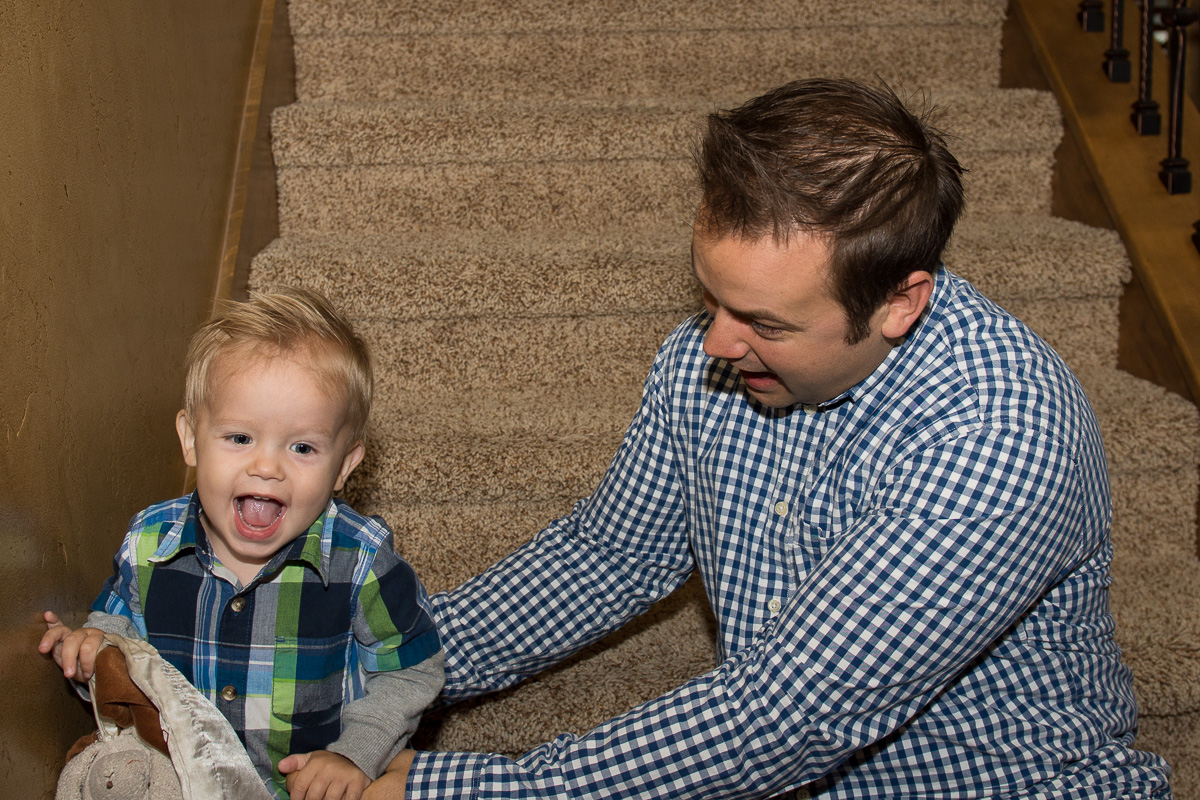 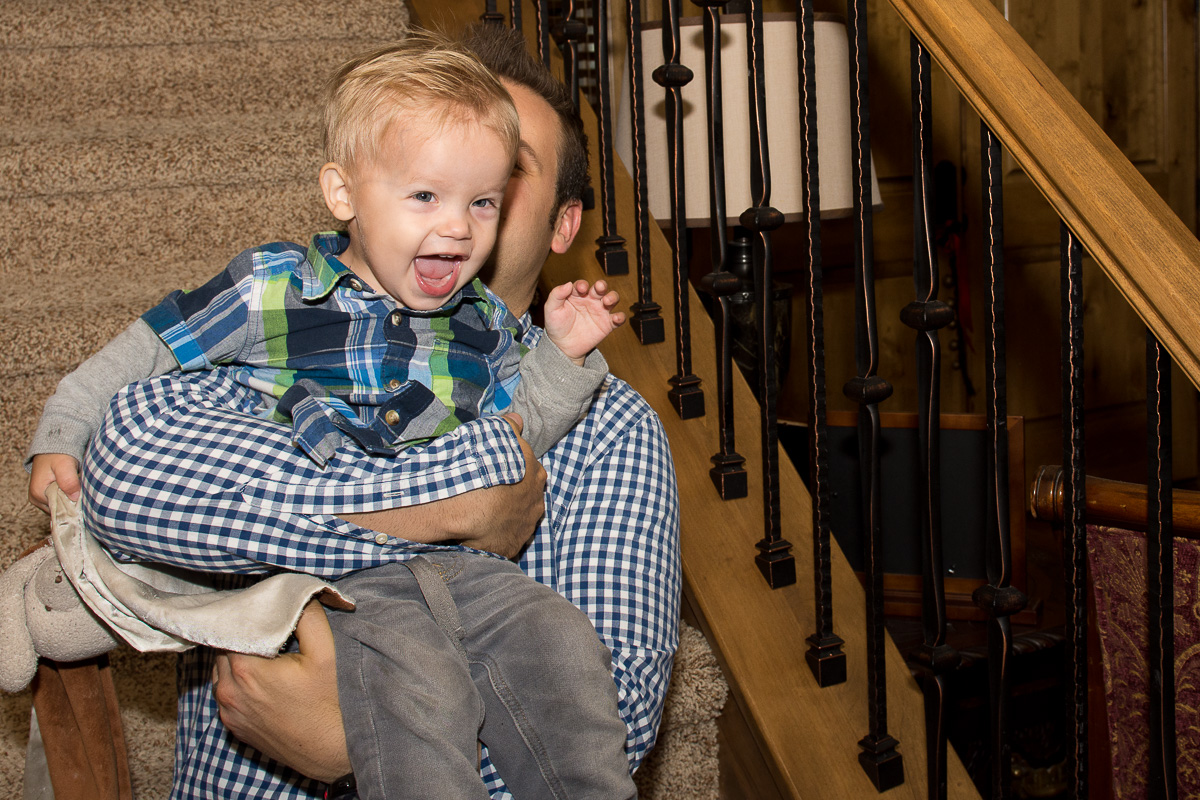 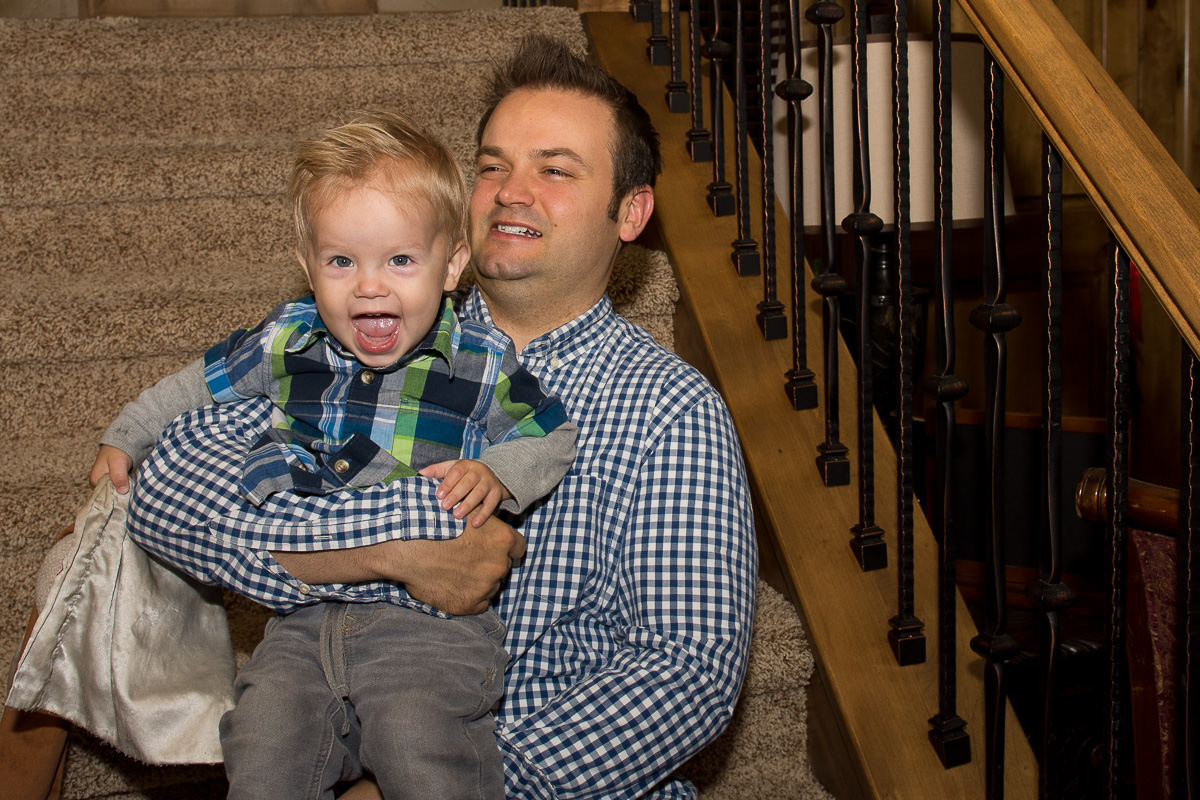 Then it was on to one of my favorite Christmas Eve traditions; the sibling gift exchange. This year, each sibling gave a gift to the brother two younger than himself, which meant that Blake and Crew exchanged gifts and Nash and Finn swapped as well. I love seeing the expressions on the faces of the givers more than the receivers. They light up with anticipation when they watch their siblings unwrap the items they carefully picked out on their individual shopping trips.

The boys are very particular about opening up presents from youngest to oldest, so first up was Finn who received a helicopter from Nash. My favorite part of Finn’s gift was the time Nash and I spent picking it out. We had to run to a baseball registration together back at the beginning of December, so we made a date out of it and went shopping and out to lunch. He was so grateful for that brief date. To this day, every time we pass the HomeGoods and Panda Express that we went to that day, Nash comments on the one time we had a date there, just him and me. 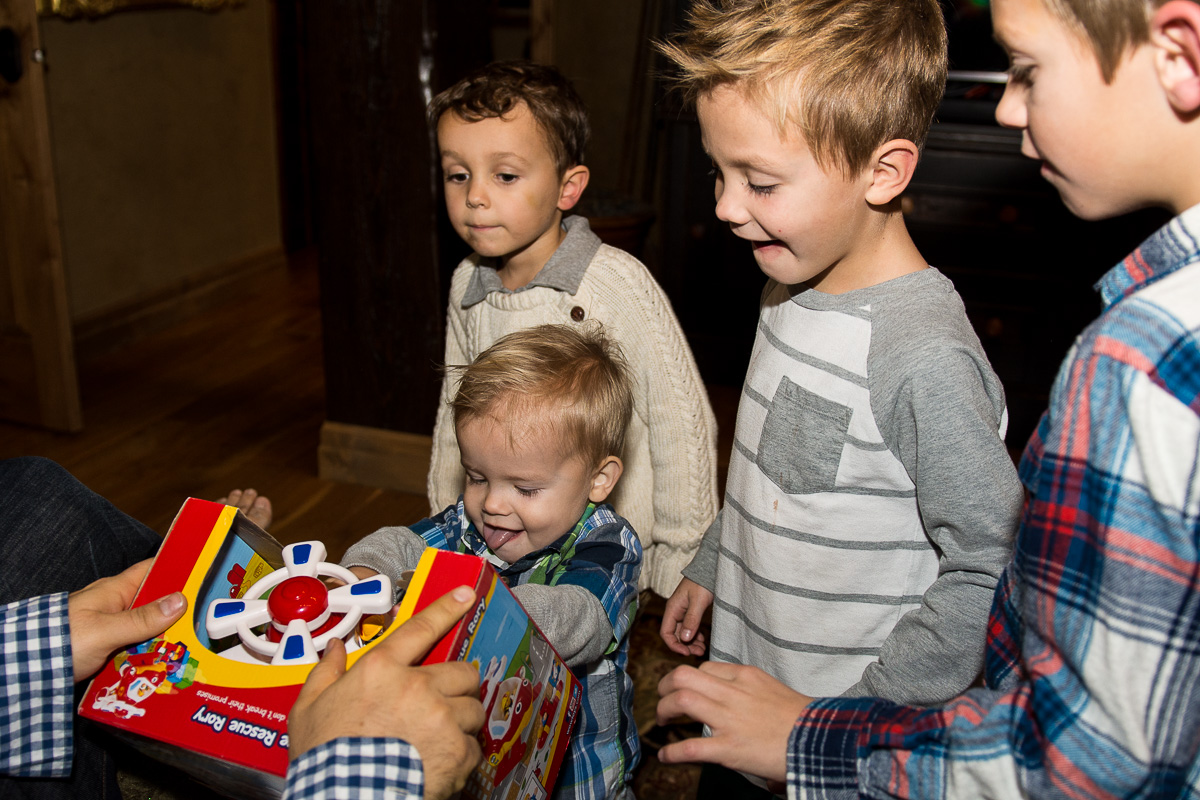 Next was Crew who opened Blake’s gift. 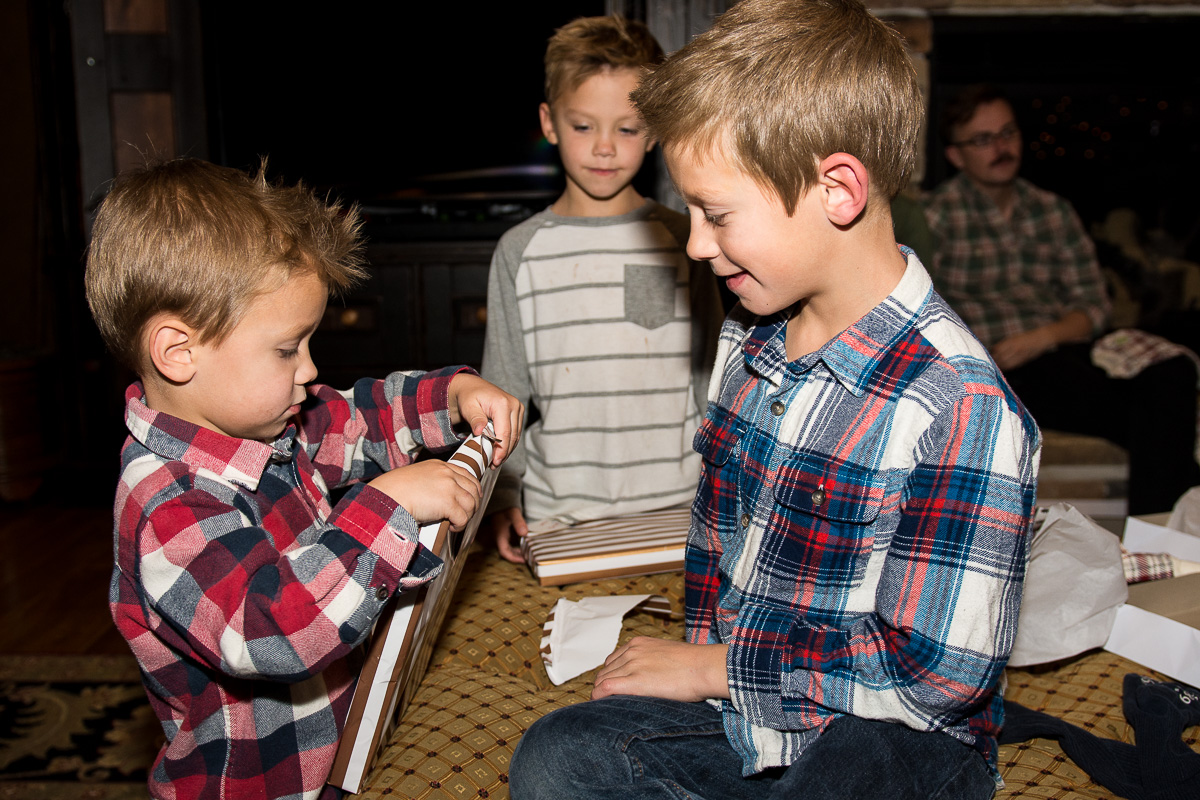 Blake knew exactly what he wanted to buy for Crew. He wanted to have a book customized with Crew’s name in it. When we went online to search for customizable books, Blake found the perfect Cars book that could be printed with Crew as a character alongside Lightning McQueen. He was a just a tad excited for Crew to open it. 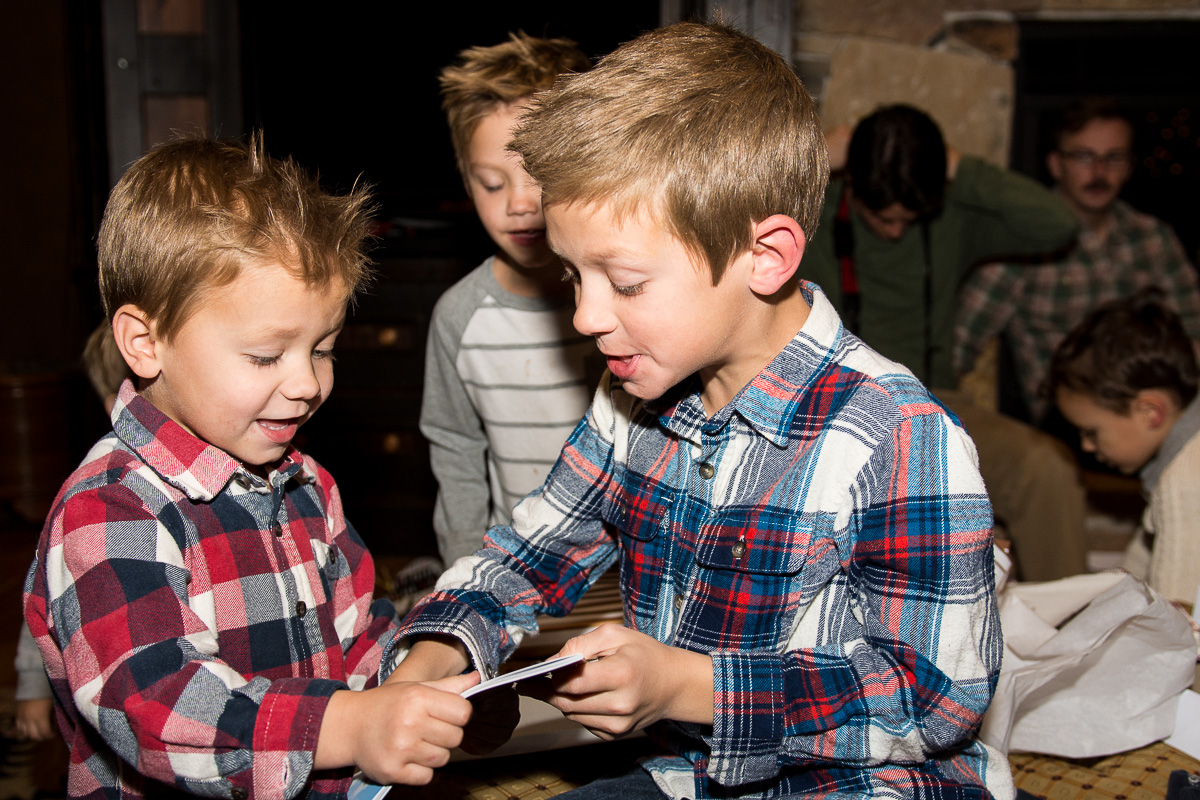 With a little bit of help from me, Finn picked out a Star Wars LEGO watch to give to Nash. Nash kept sneaking that watch into my cart when we were out shopping for Finn’s gift, so I knew he would love it. Finn isn’t quite old enough to understand picking out gifts but I’m sure in a year or two he’ll pick right up on the joy of giving. 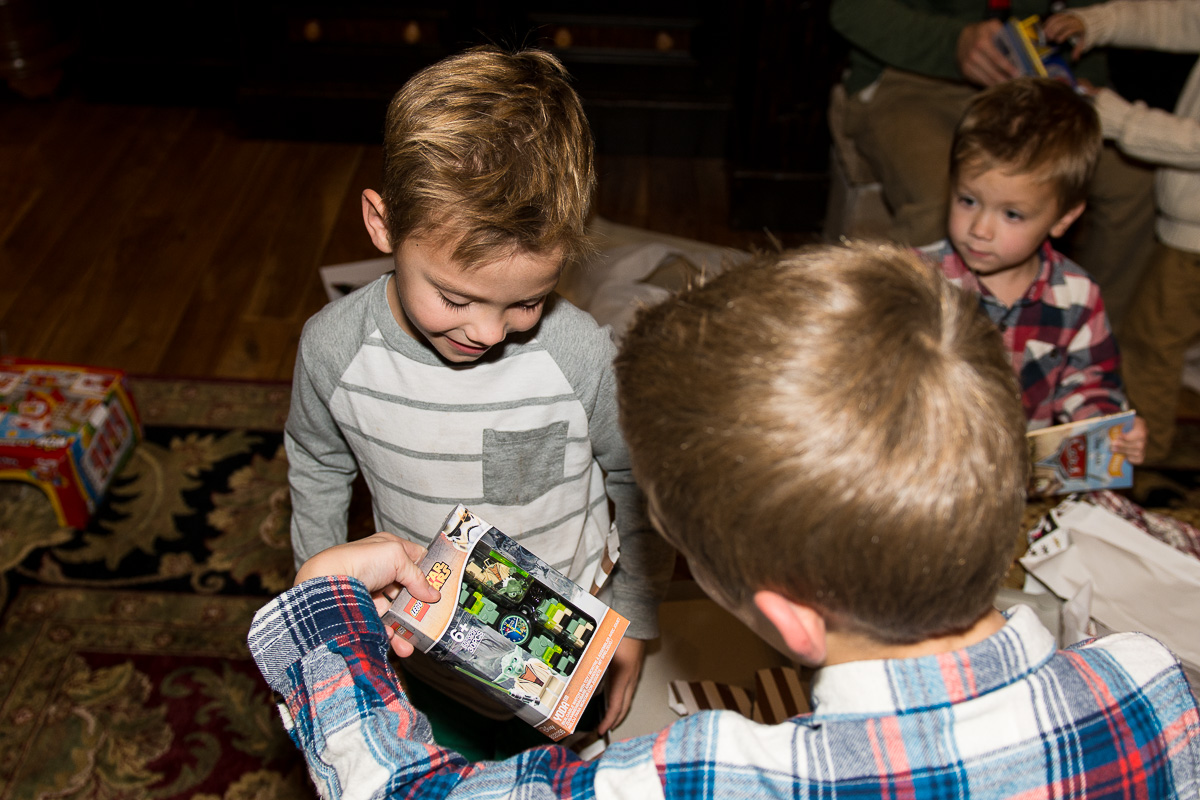 Last to open his gift was Blake who received a Disney version of Eye Found It! from Crew. We love to play the Busytown version of the game so Crew did a great job picking out something that Blake would enjoy. 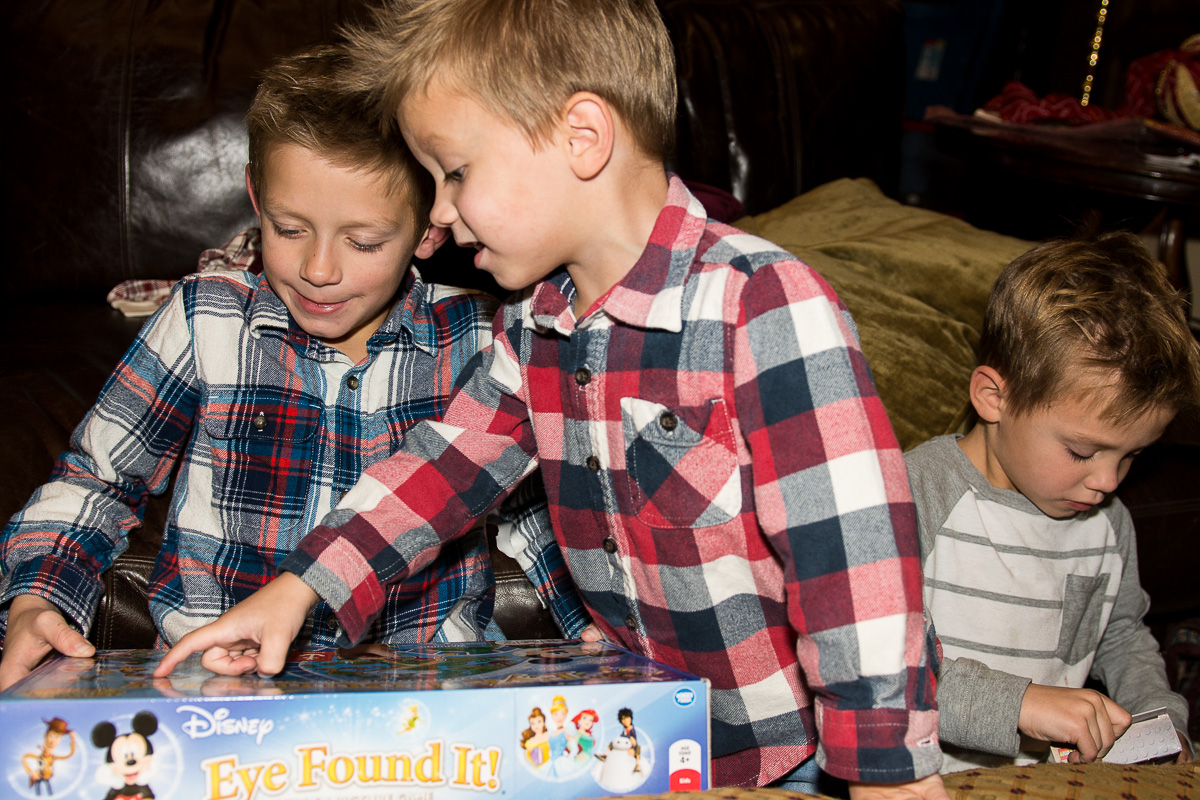 There was one more present to open before getting snug in their beds; the traditional Christmas pajamas. 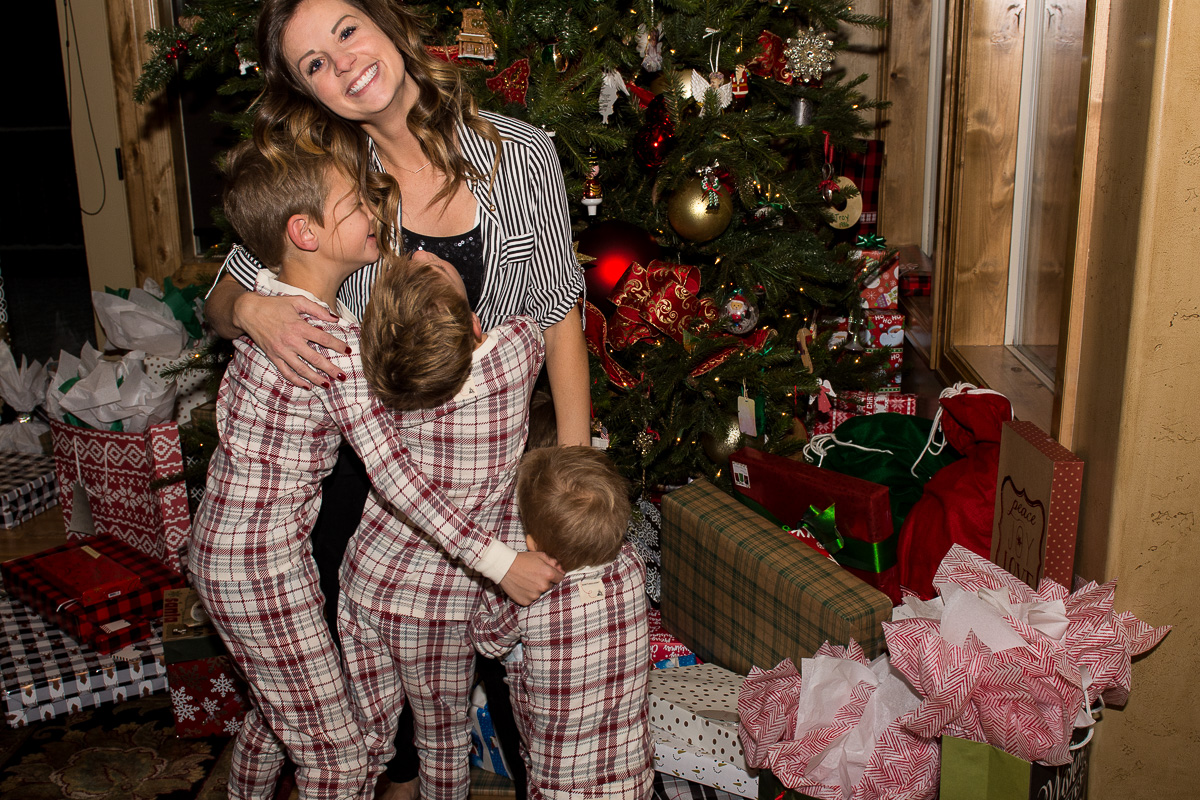 The tree was lined with presents and Santa hadn’t even visited yet. We set out cookies and the boys tried their hardest to settle down and not think about how awesome the next morning was going to be.