We gave the boys a wake-up rule on Christmas morning and told them they couldn’t go upstairs until the clock said exactly 7:30am. At 7:21am, they were lined up at the stairway, anxiously counting down the minutes until they could see what Santa brought. 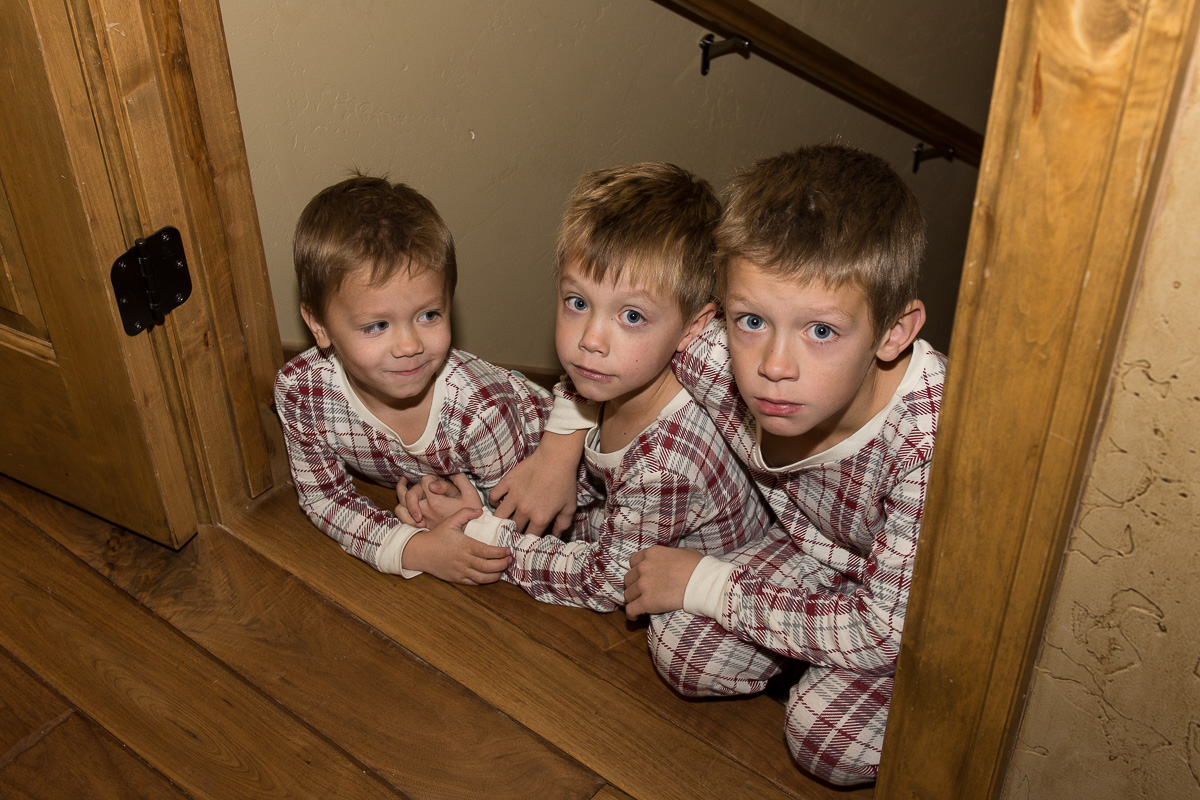 While we were waiting for everyone to finish breakfast, I was the mean mom who insisted on a photo op. 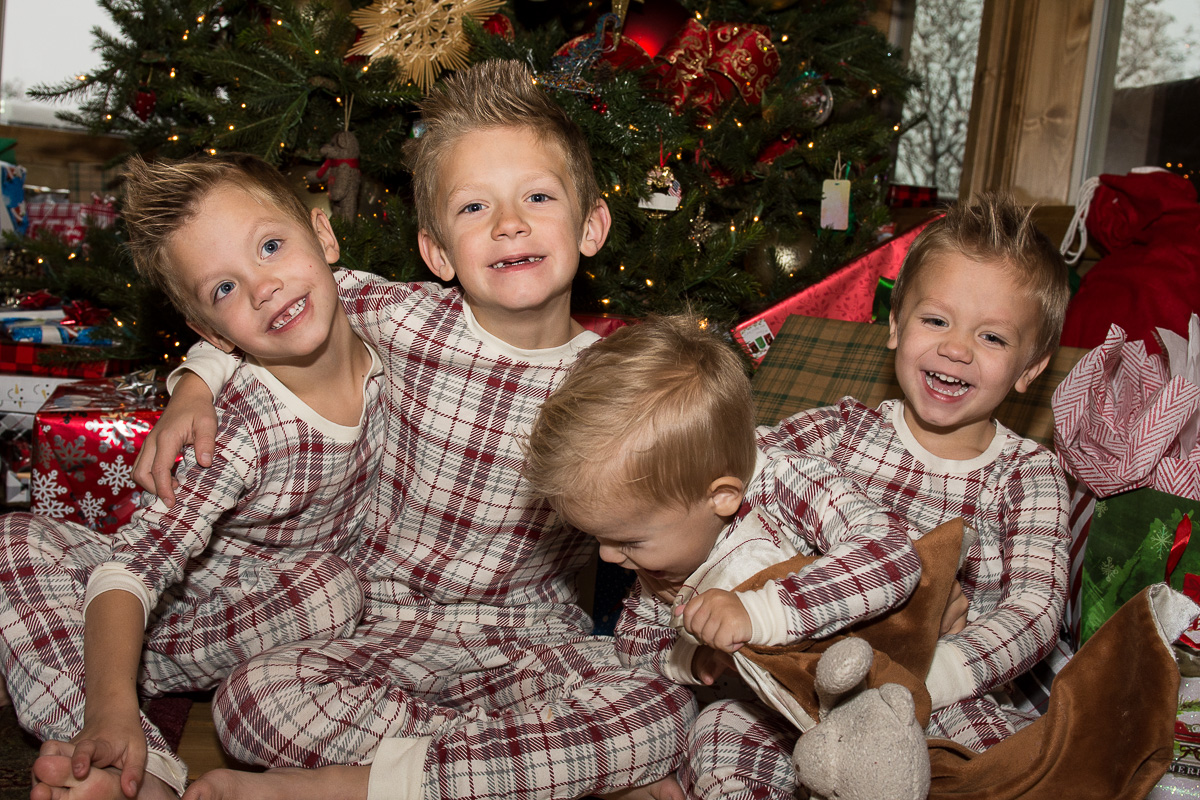 It wasn’t working out too well until we gave the boys some bells. 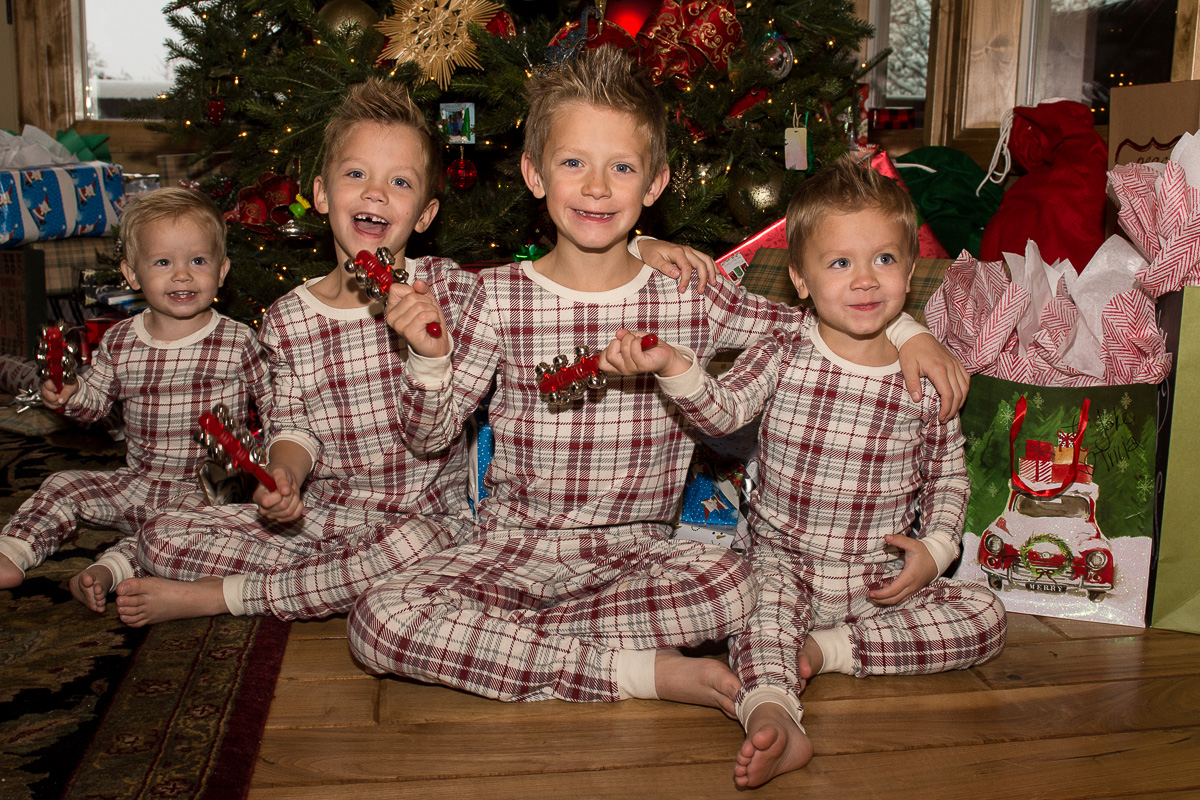 The bells needed to be distributed anyway for our traditional Christmas morning kick-off with the Tanners. We marched down the stairs one by one singing Jingle Bells, wearing Santa hats and ringing the bells. 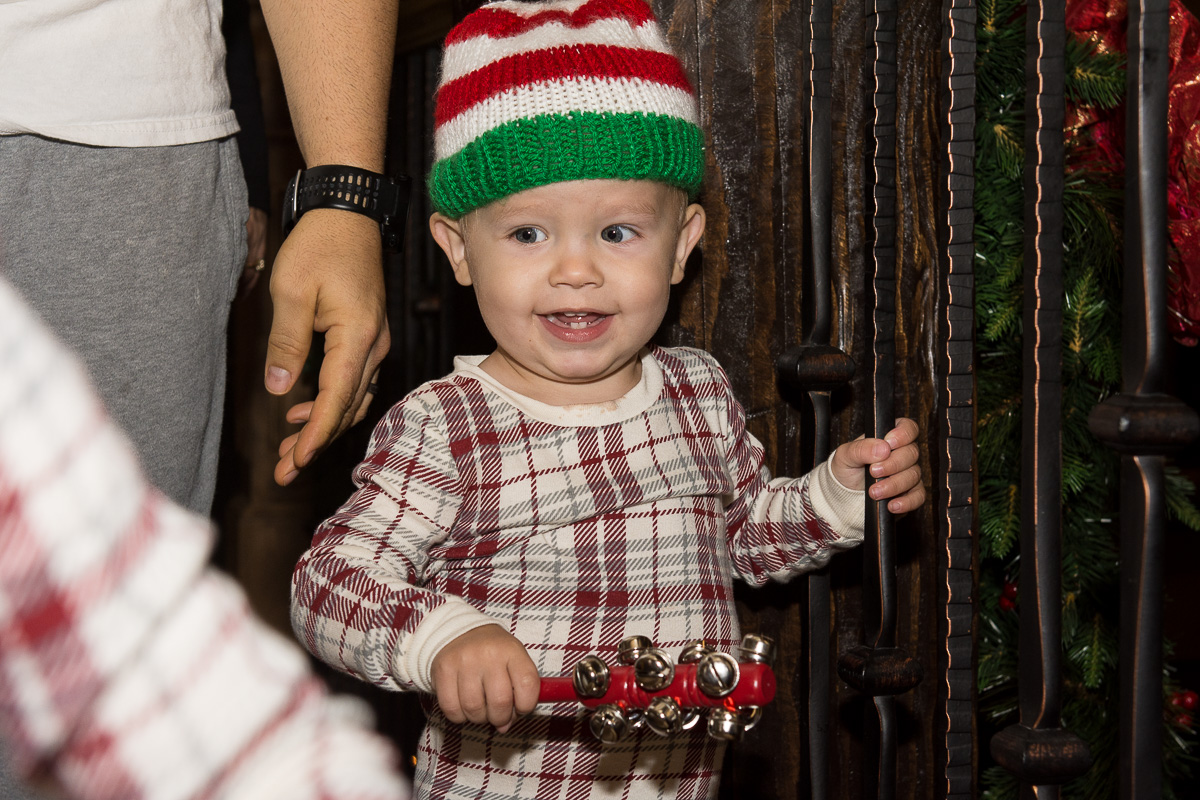 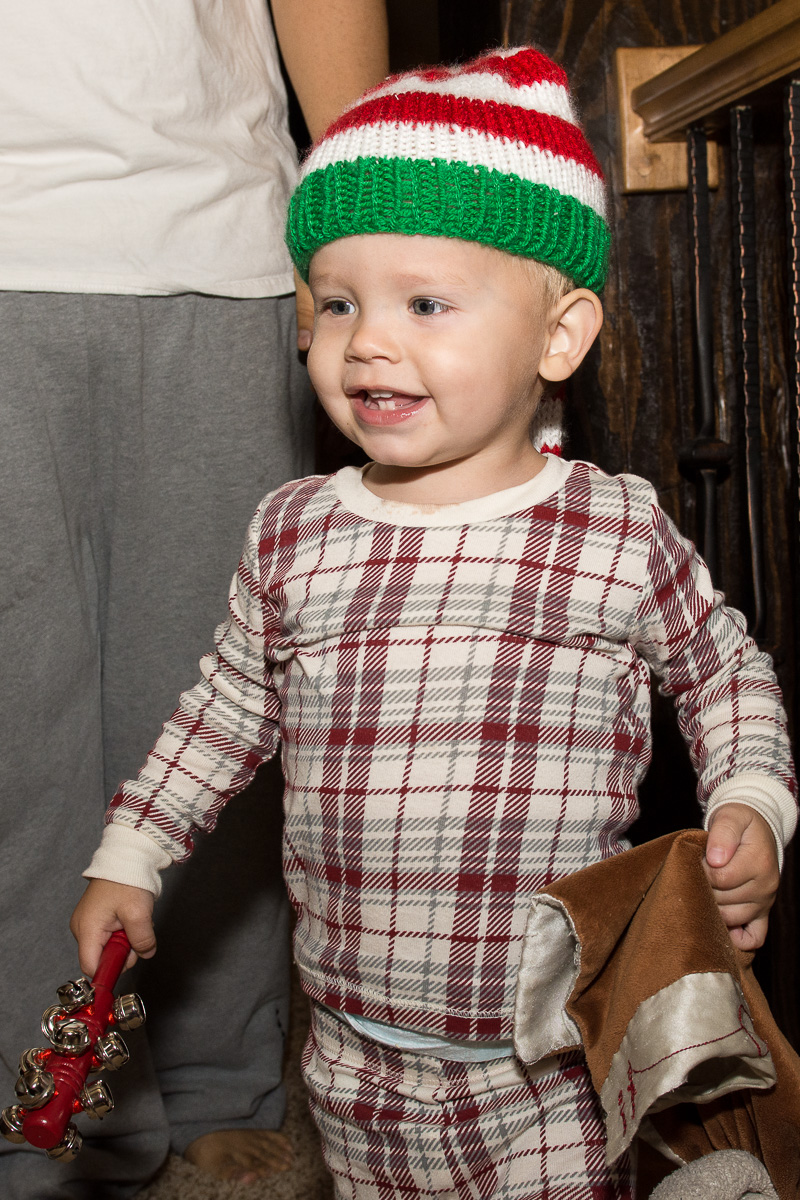 We let the boys dig into their borrowed stockings first. Nash was amused by the unconventional six-pack of Sprite that Santa brought him. I never buy soda so it was certainly a treat from the jolly old man. 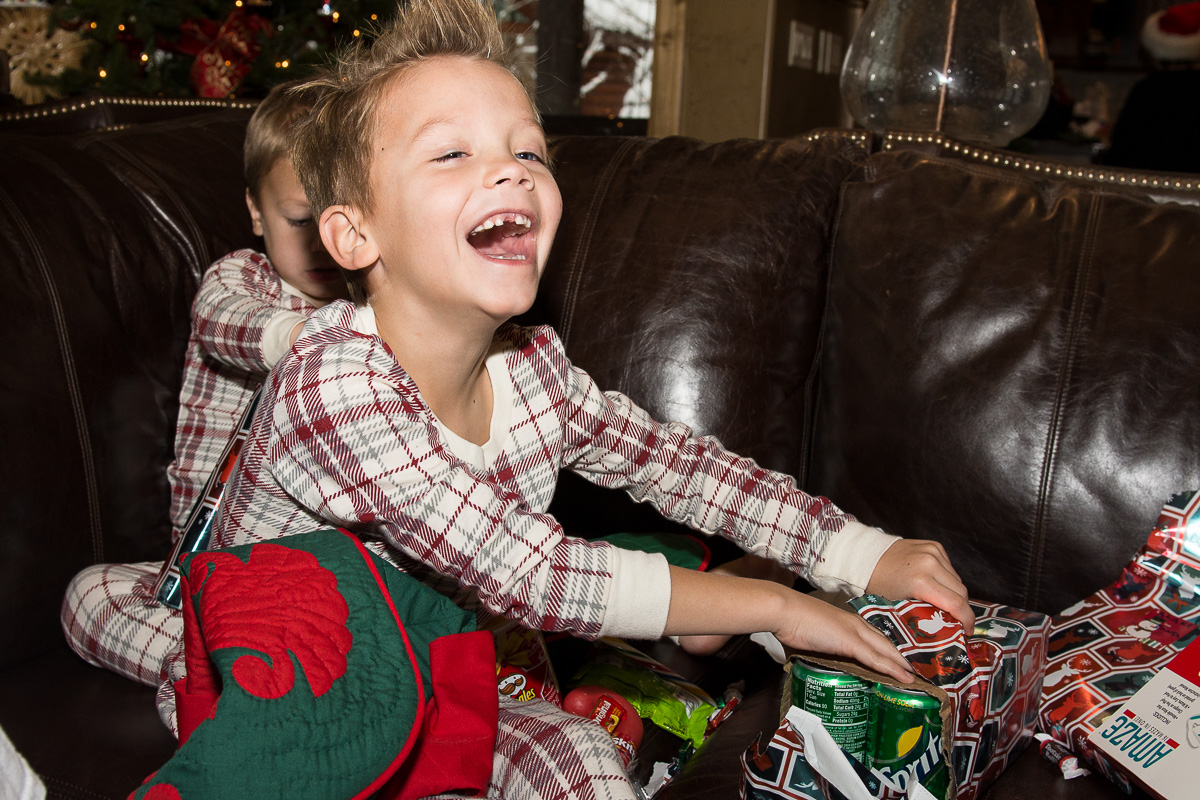 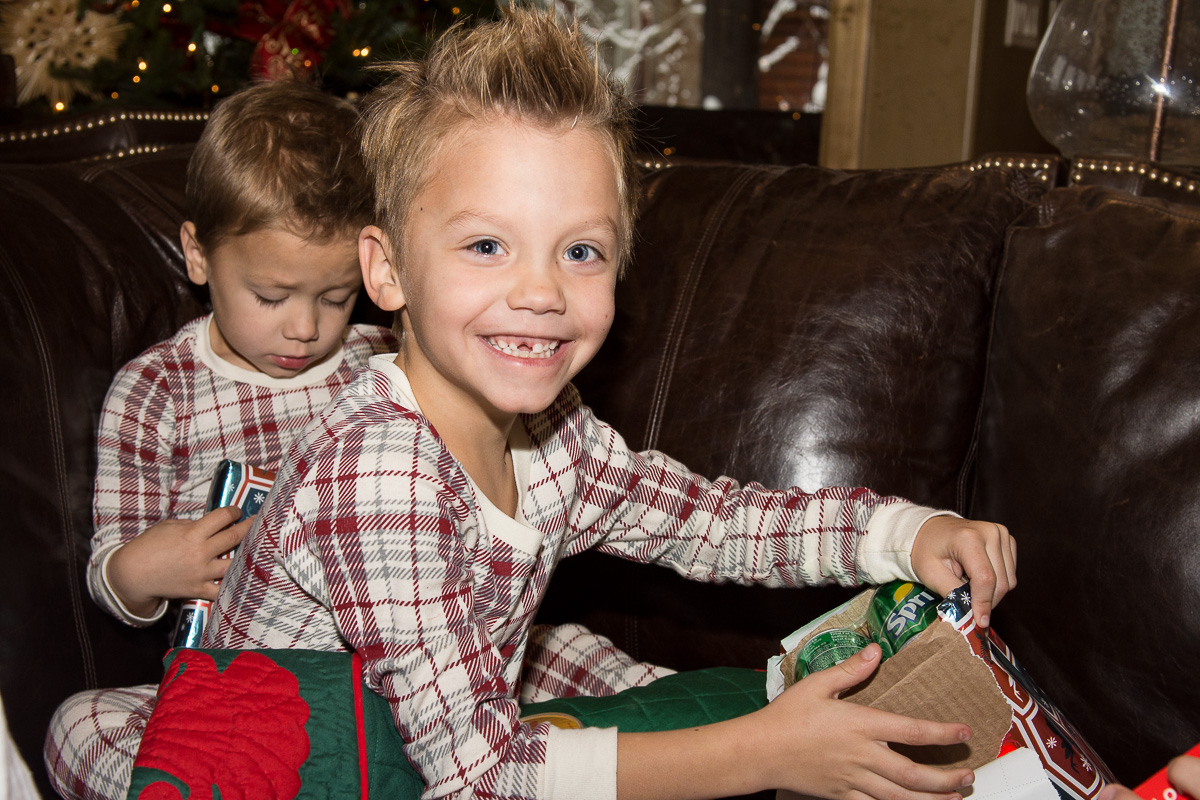 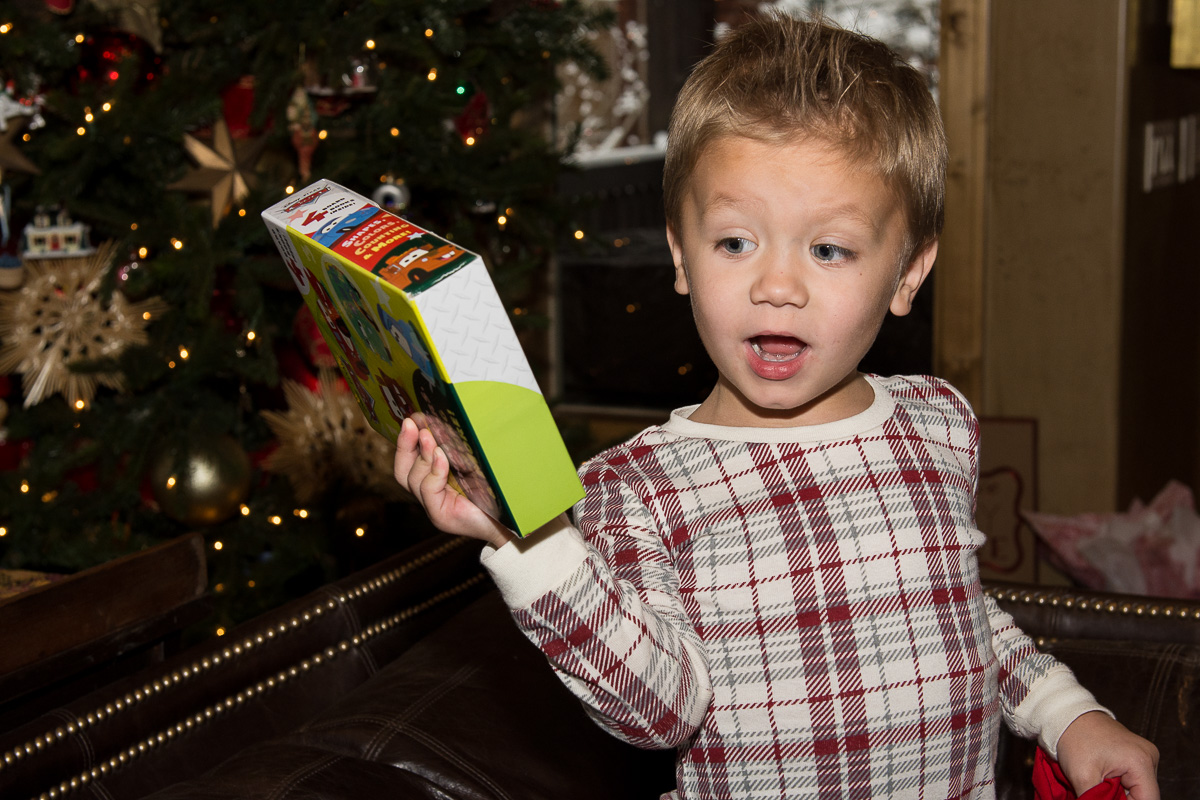 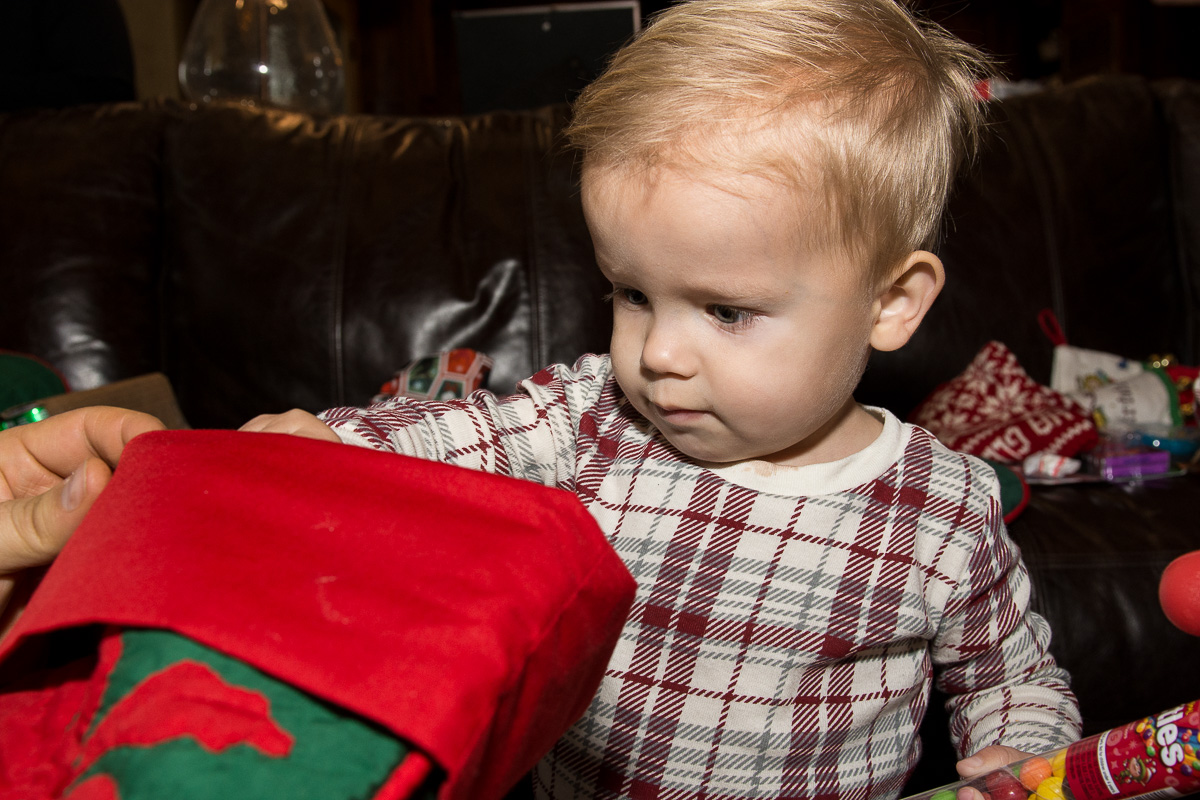 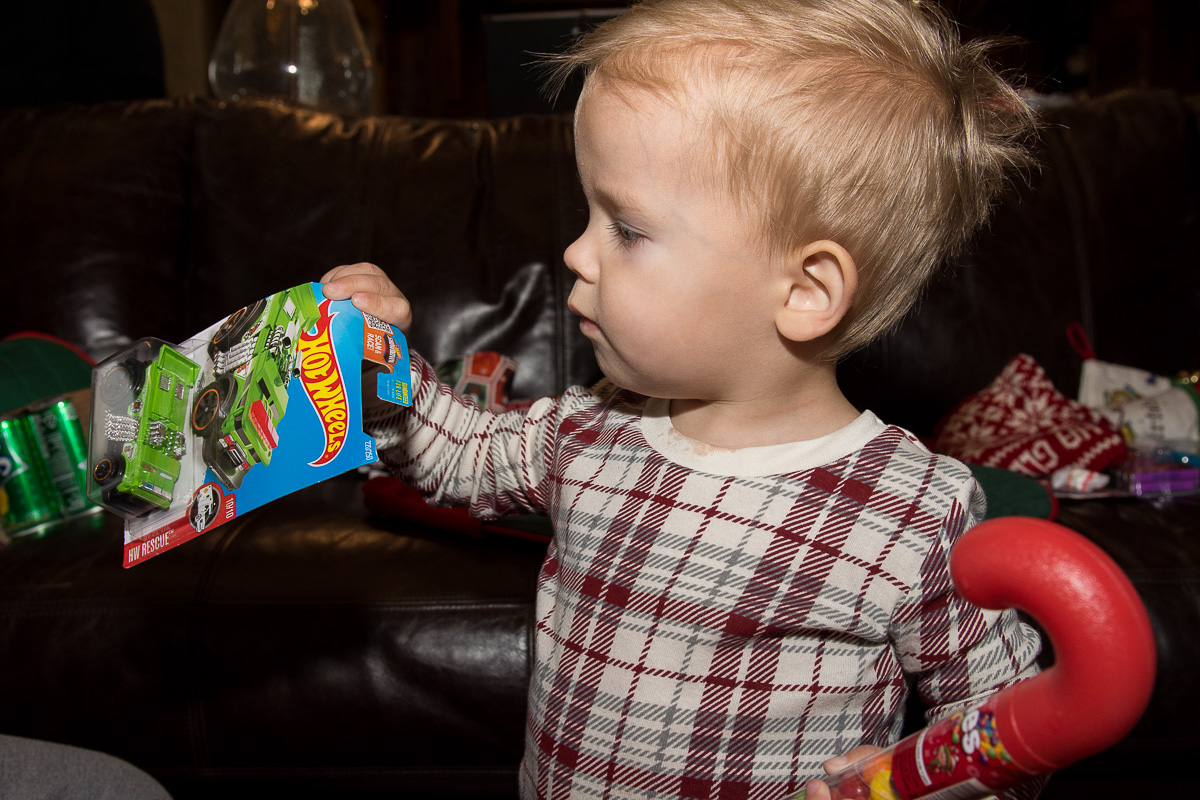 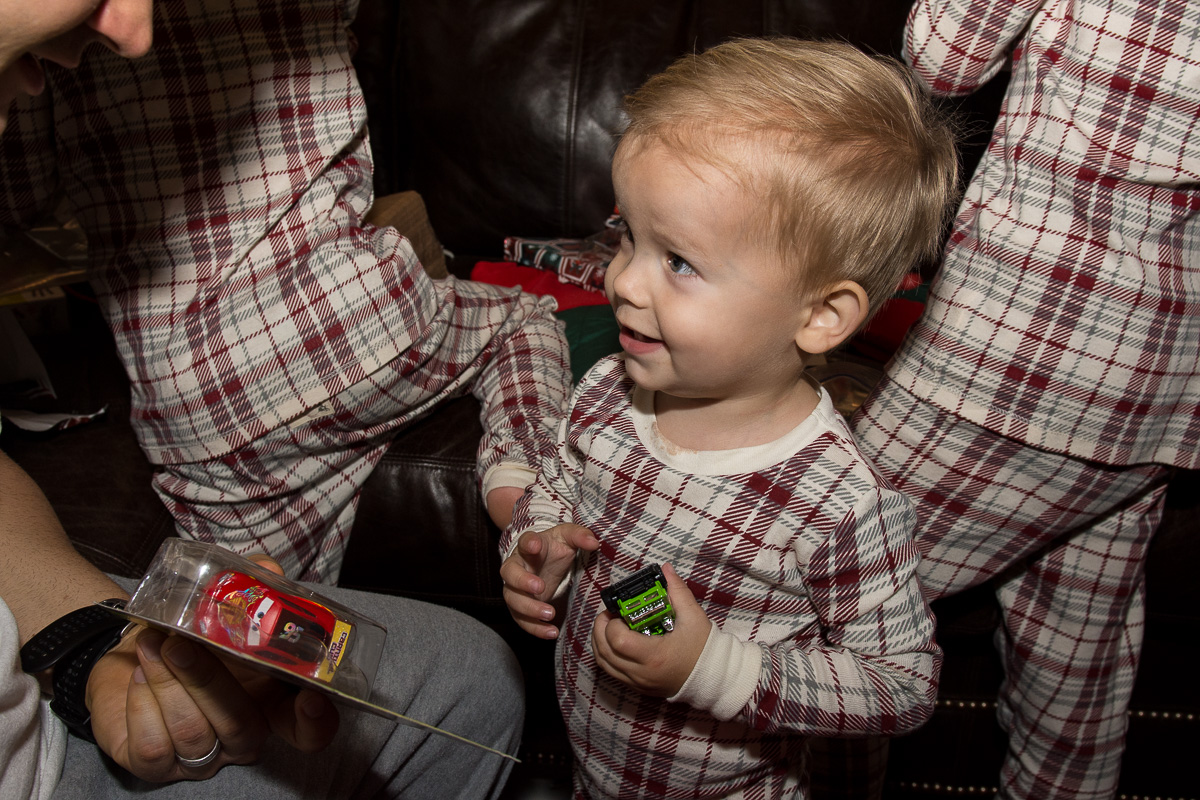 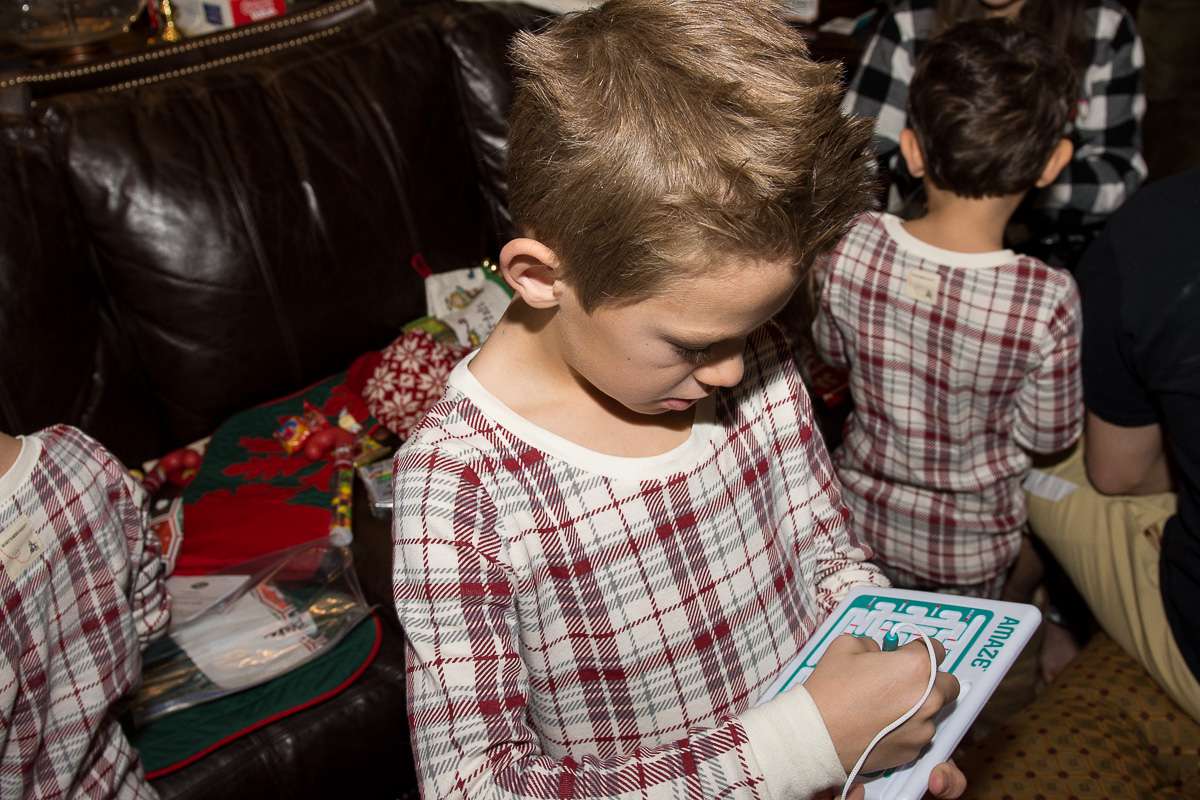 Next on the agenda was opening presents from Santa. We held to our gift opening rotation of youngest to oldest which meant that Finn got to go right after his baby cousin. I loved how all of my boys gathered around him in anticipation. 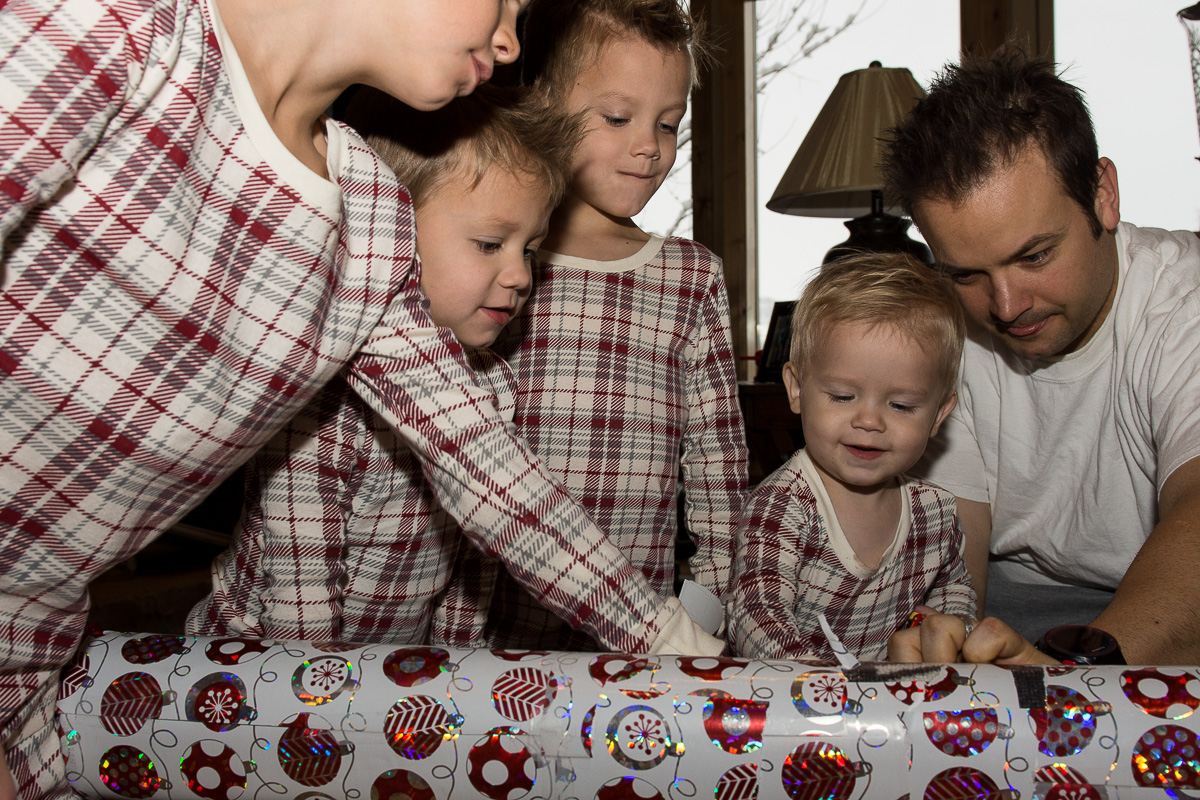 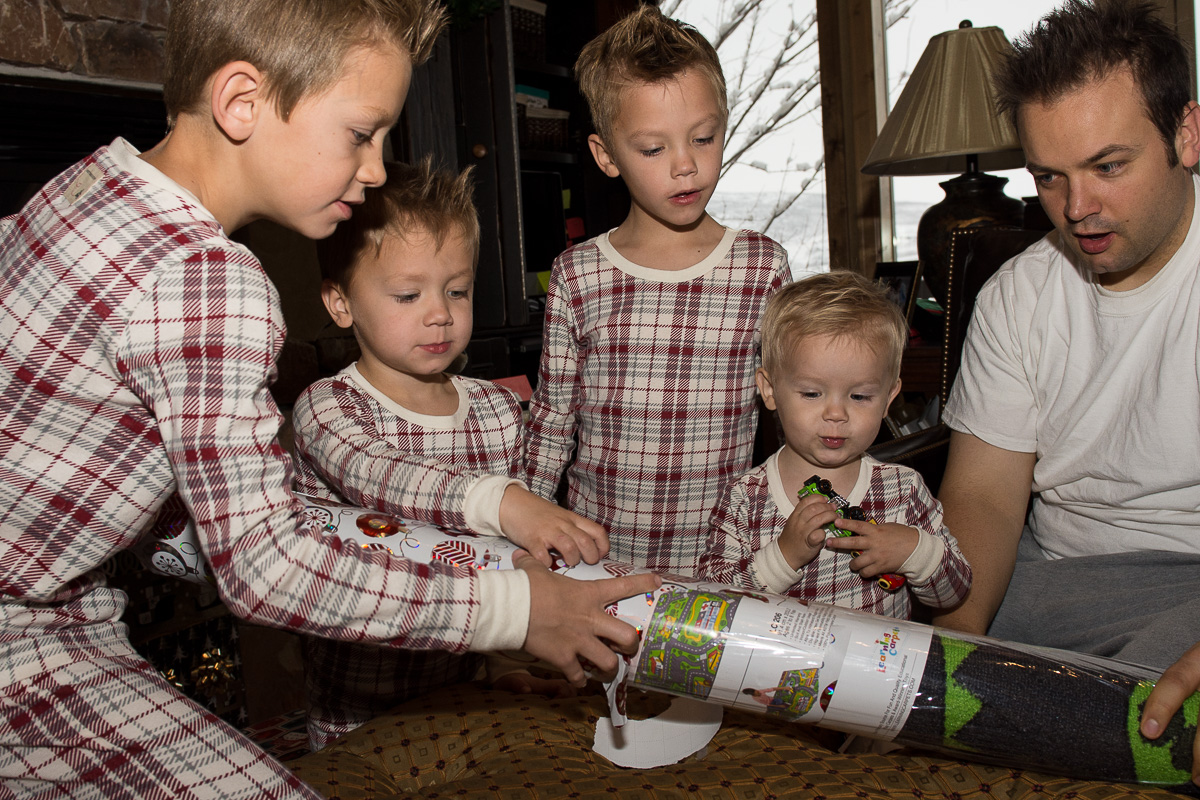 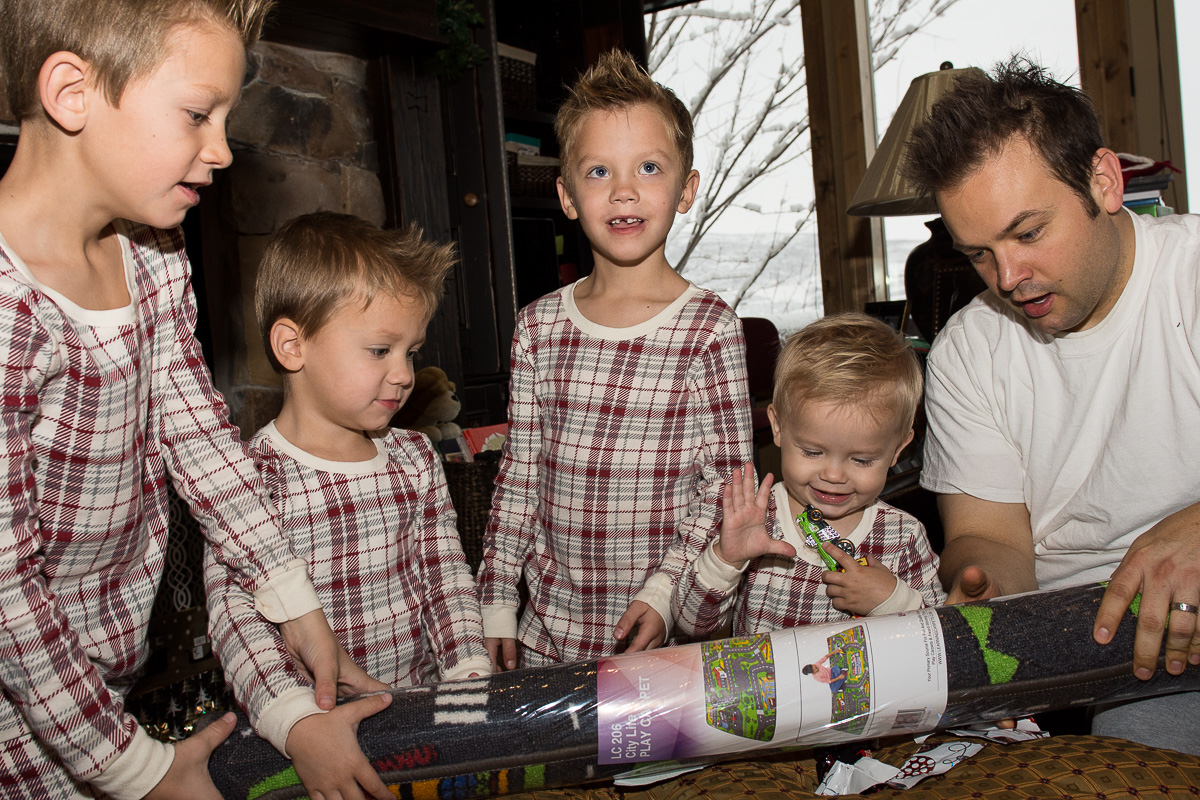 Next up was Crew. There were gasps and smiles when he received the one thing he asked Santa for; a pirate ship. 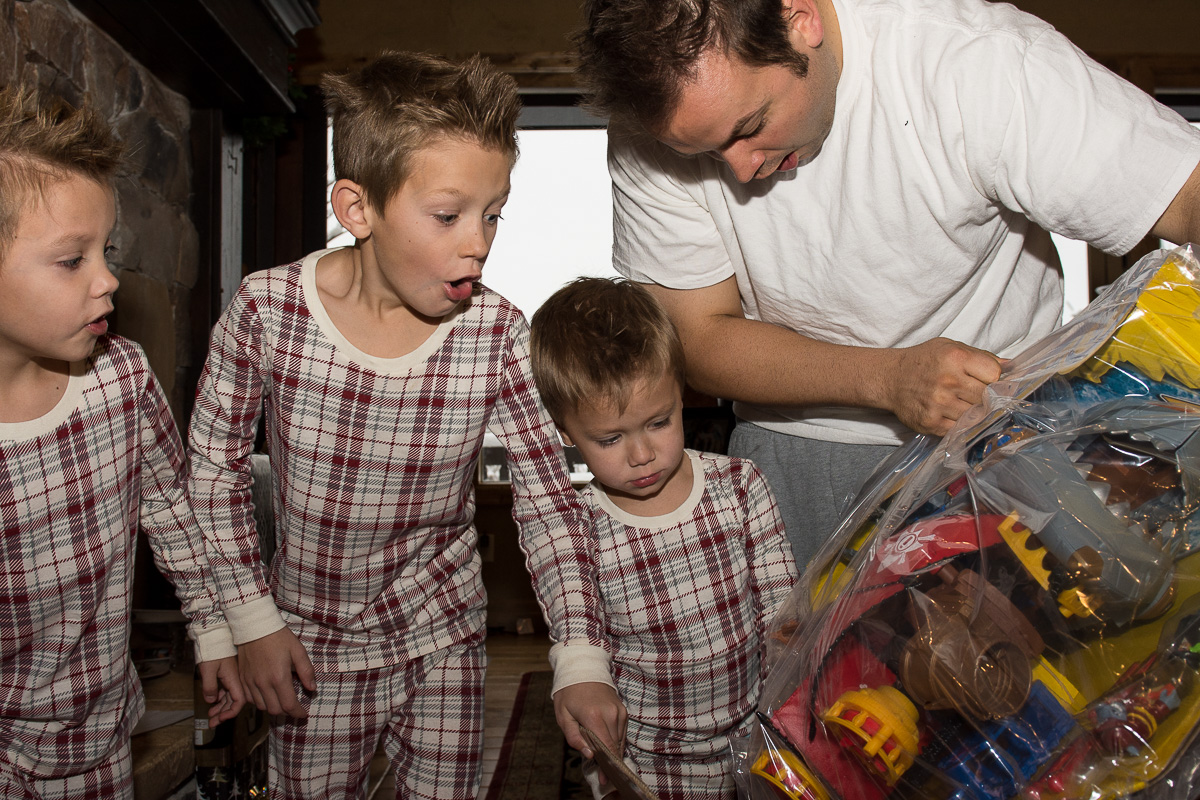 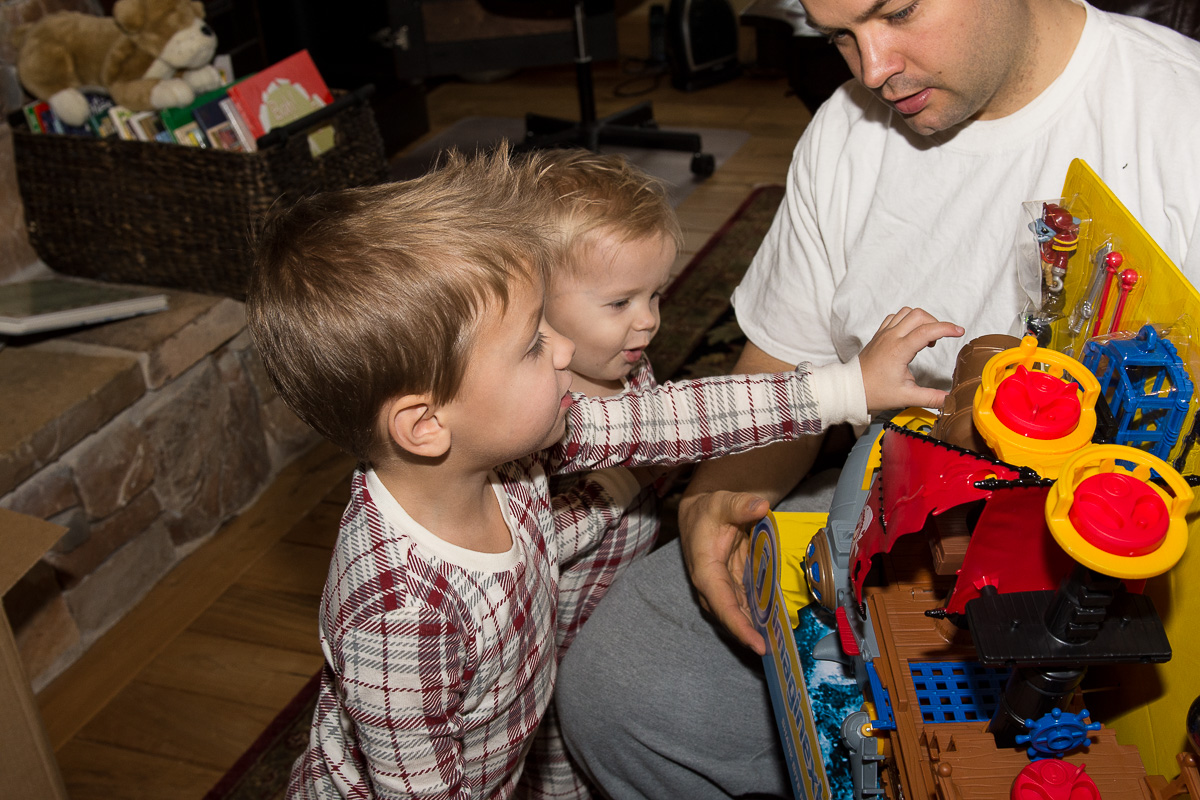 Then it was Nash’s turn after rotating through some cousins. 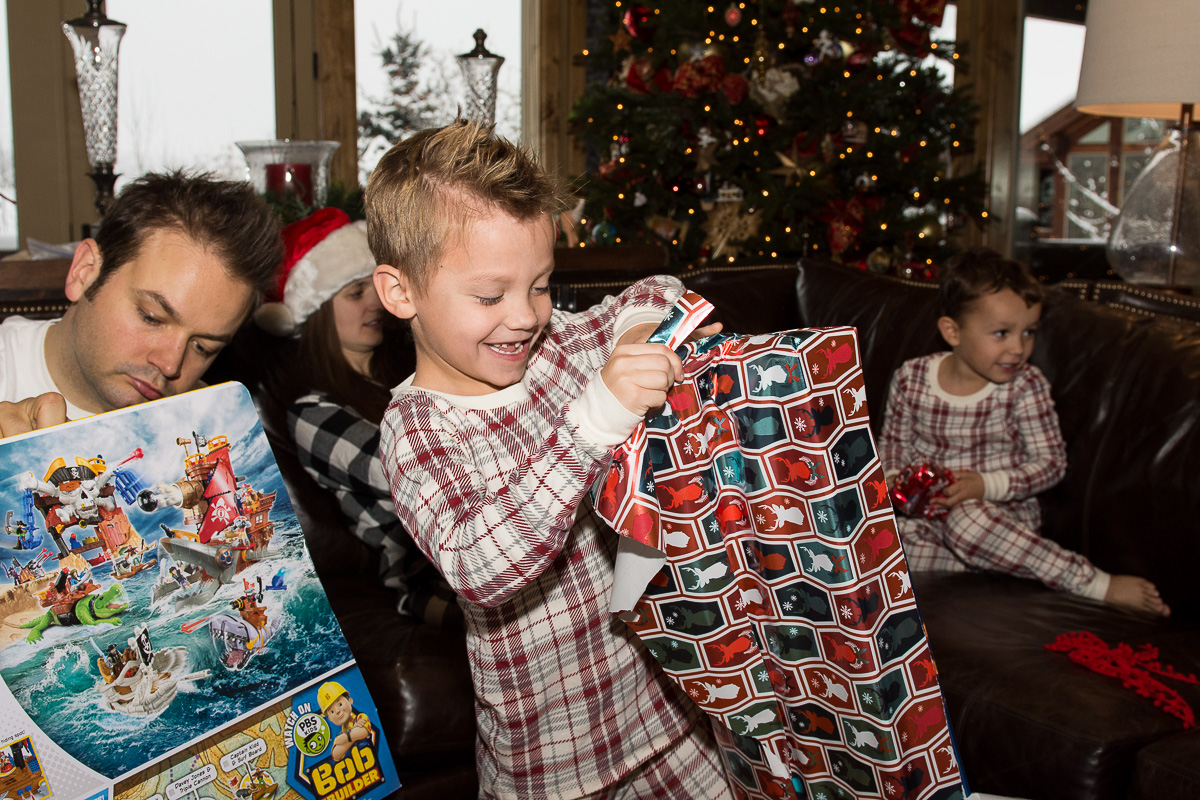 He is happy with anything relating to LEGO bricks. 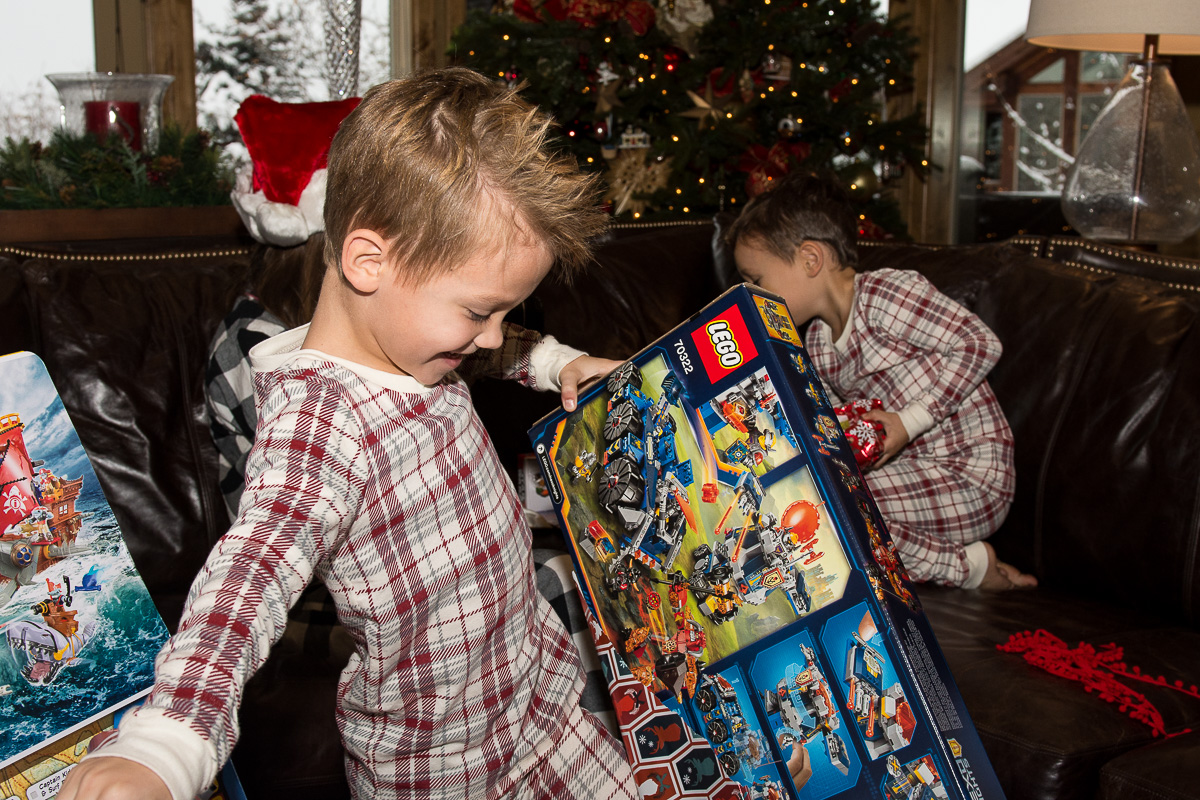 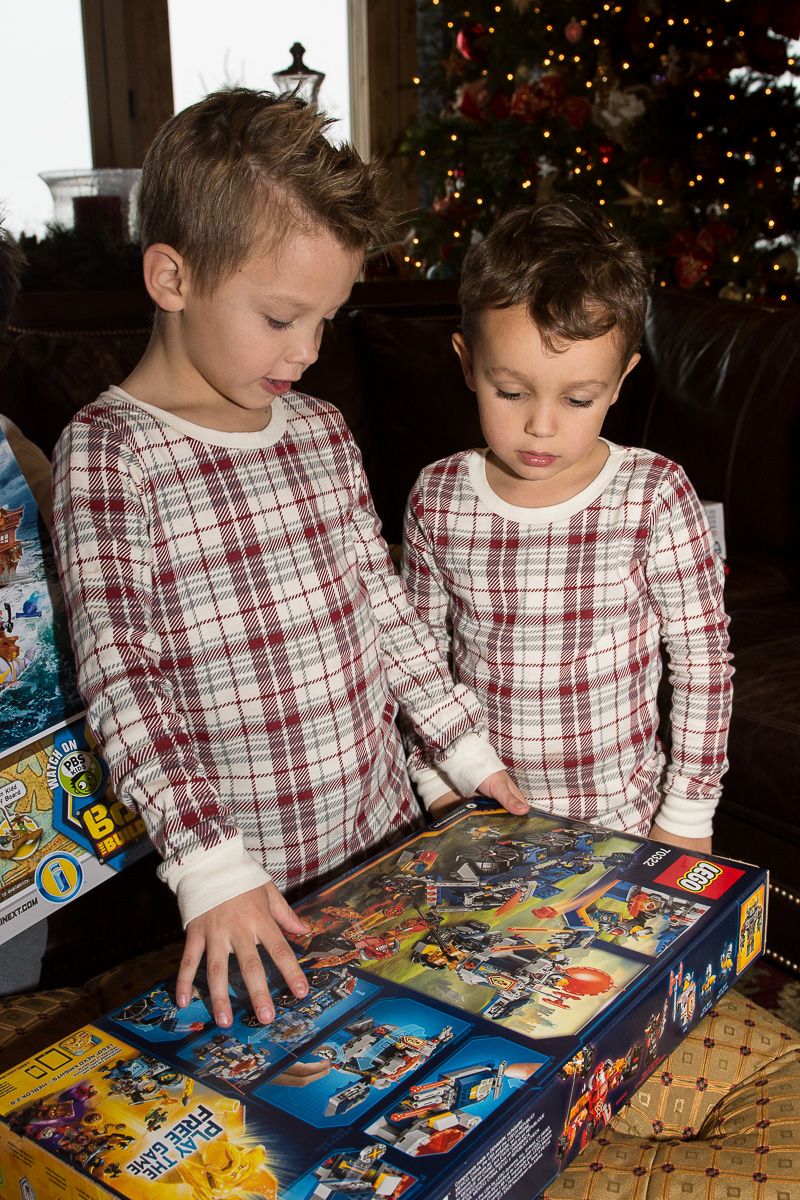 Blake opened his gift last and got just what he wanted from Santa; a glow in the dark circuit set. 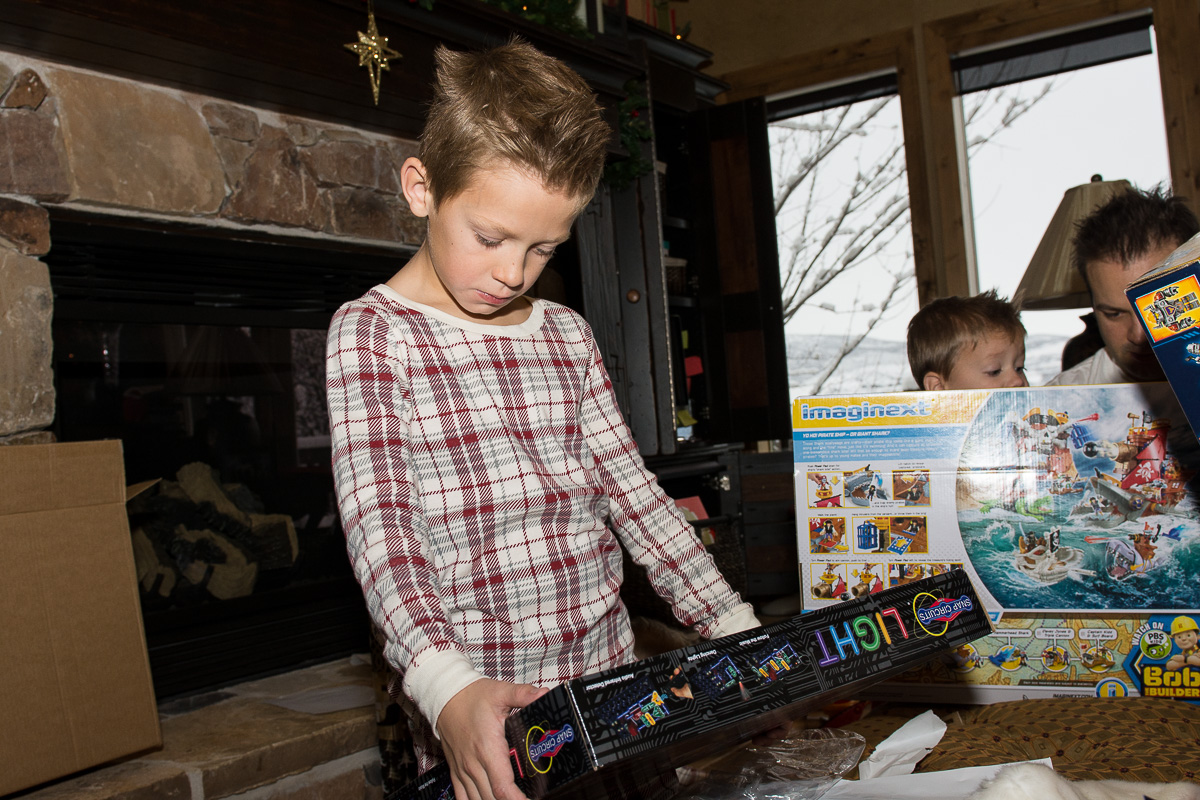 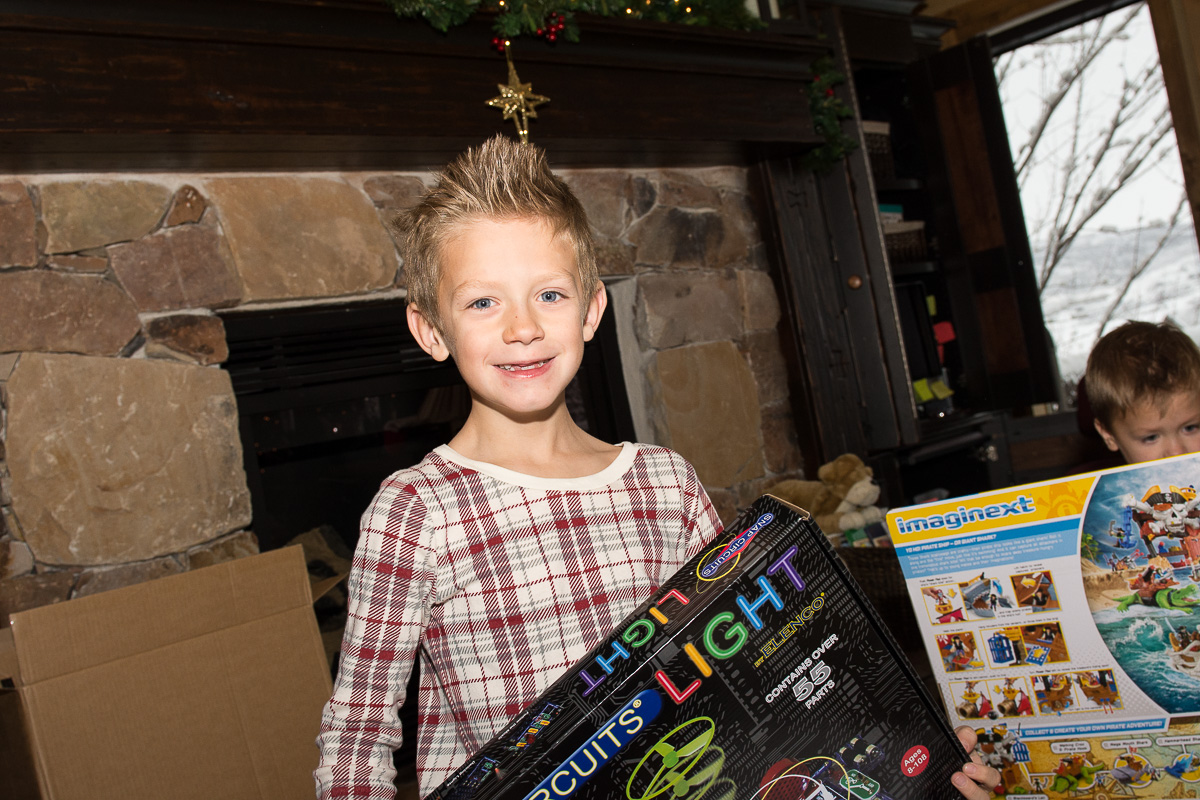 We could have ended the gift opening right there. The boys were so happy to plop down and check out their new toys. 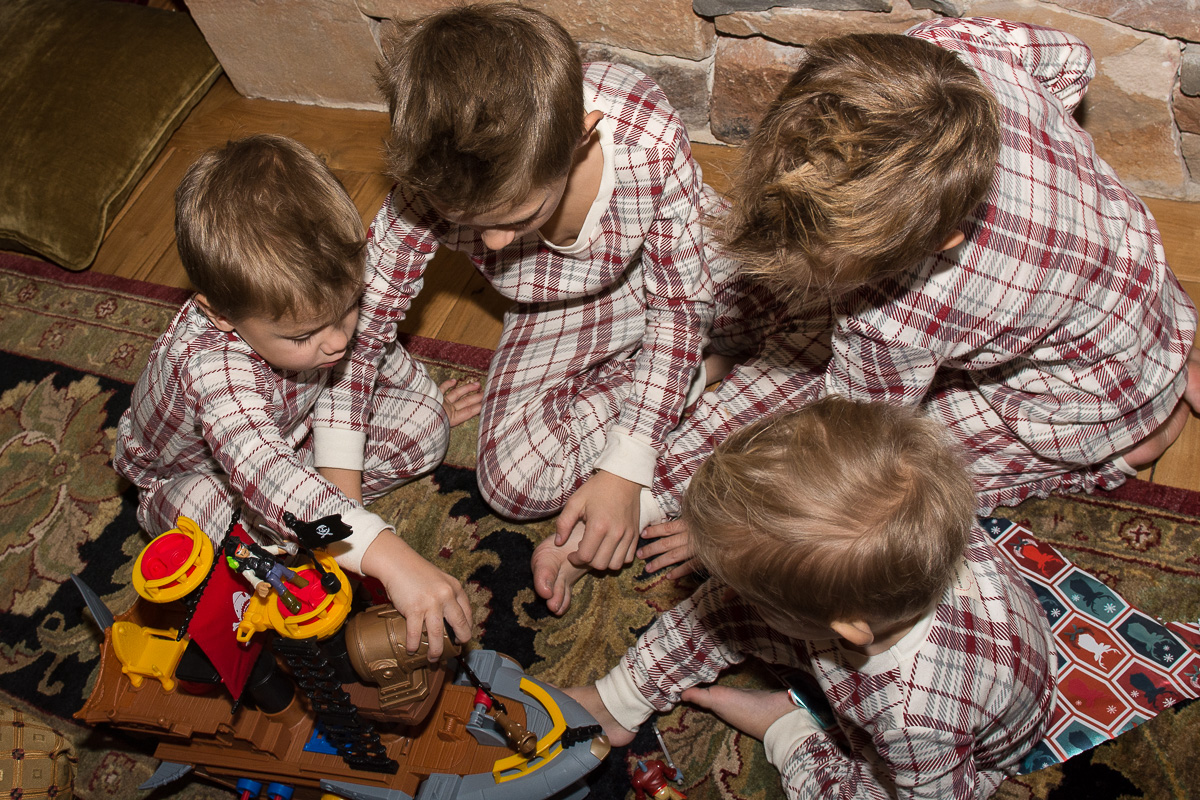 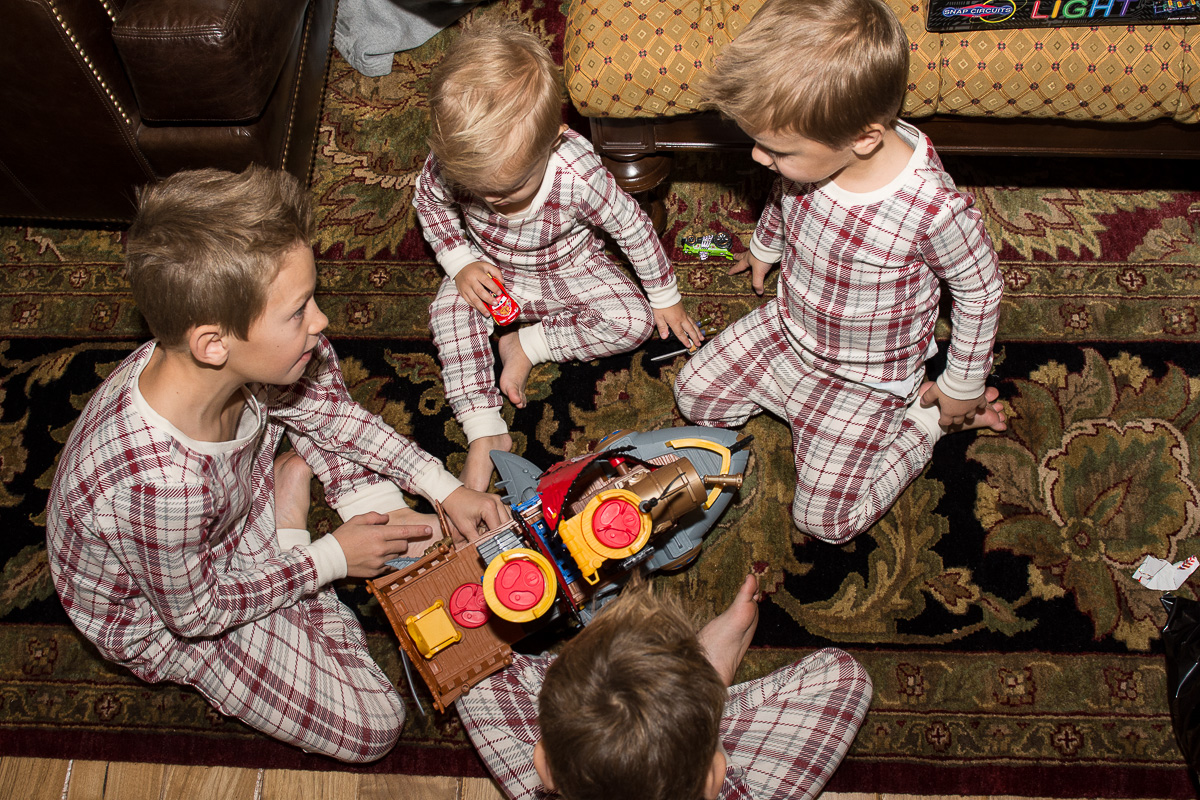 Aside from seeing what Santa brought, Nash’s most anticipated present was the well-wrapped gift from uncle Todd. 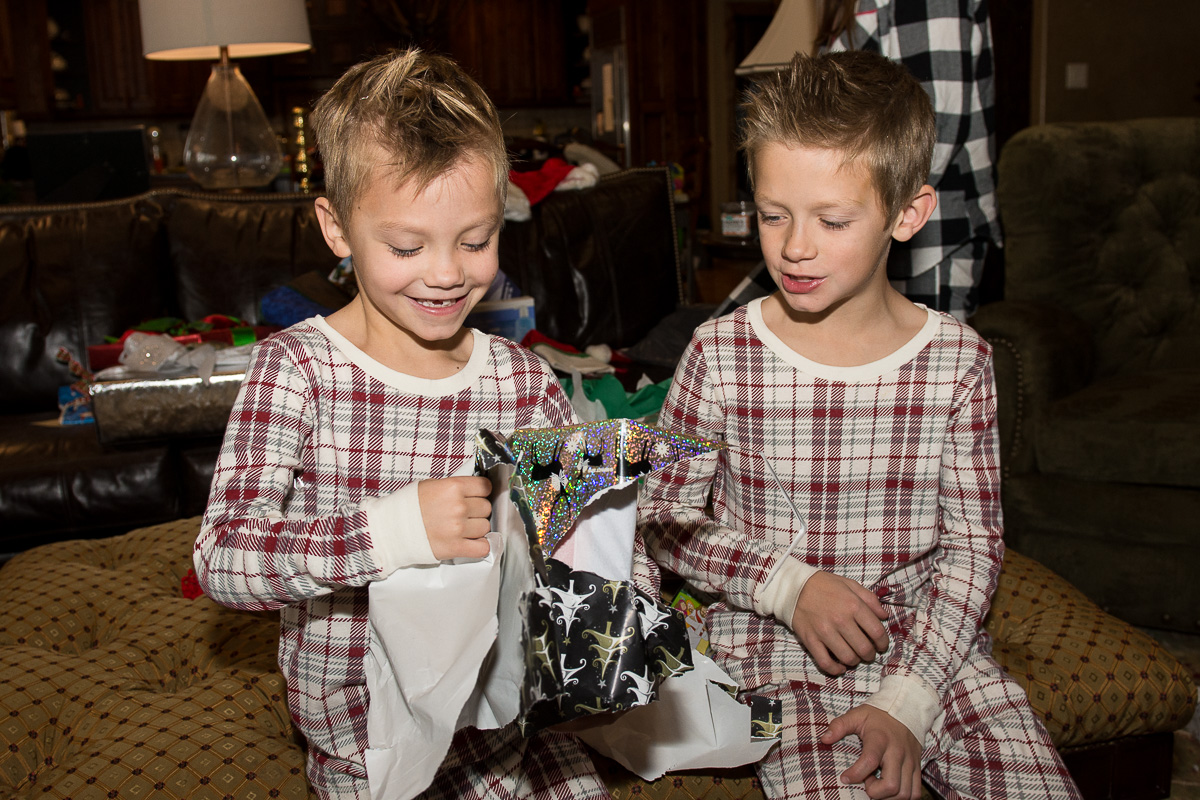 Todd followed suit from last year and gave Nash another multi-layered wrapped gift. In addition to layers and layers of tissue paper and wrapping paper, this year there was a layer of zip ties as well. 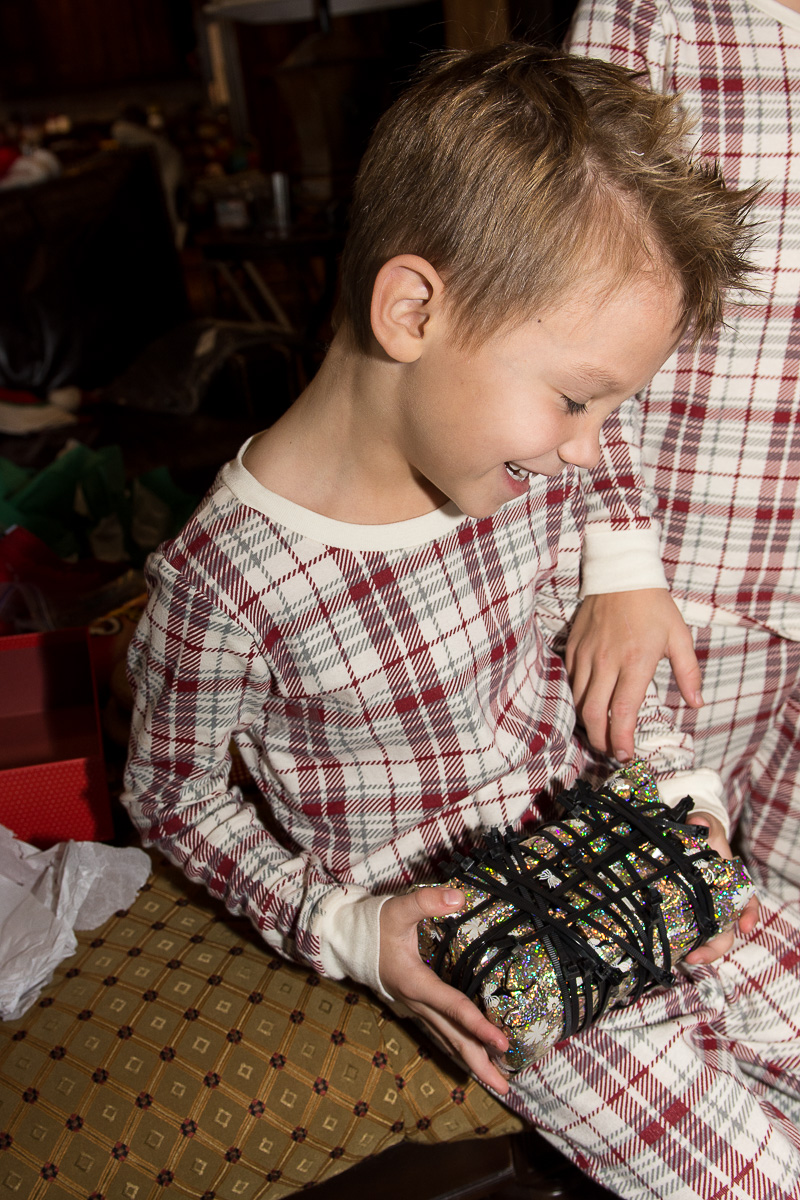 Nash thought that was just about the funniest thing ever. Todd helped him cut through the zip ties to get to the next layers. 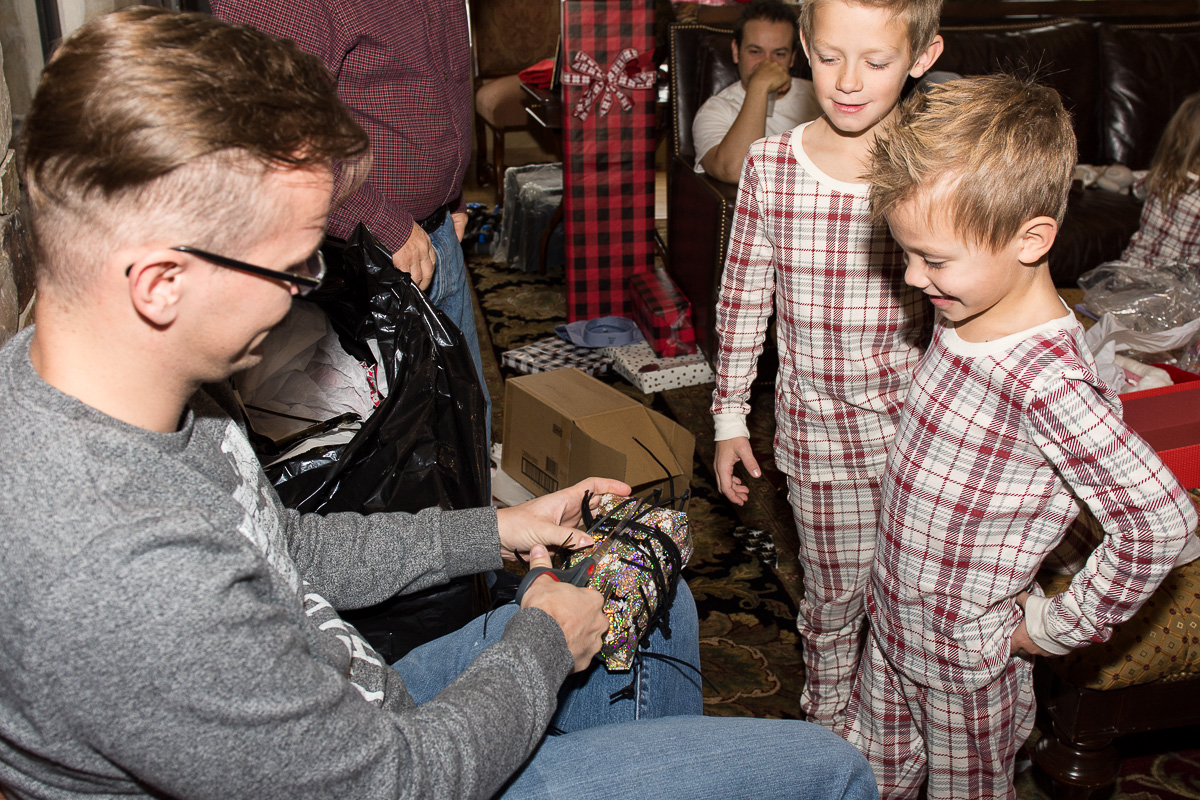 Instead of giving our kids “stuff” this year, we decided to give them an experience they could enjoy all year instead. They were shocked and elated when they opened Disneyland passes. We took a year off from Disney last year and gave them no indication that we were thinking about investing in passes again. I think I might have been just as excited about the surprise as they were. I couldn’t wait to see their reactions and they did not disappoint. 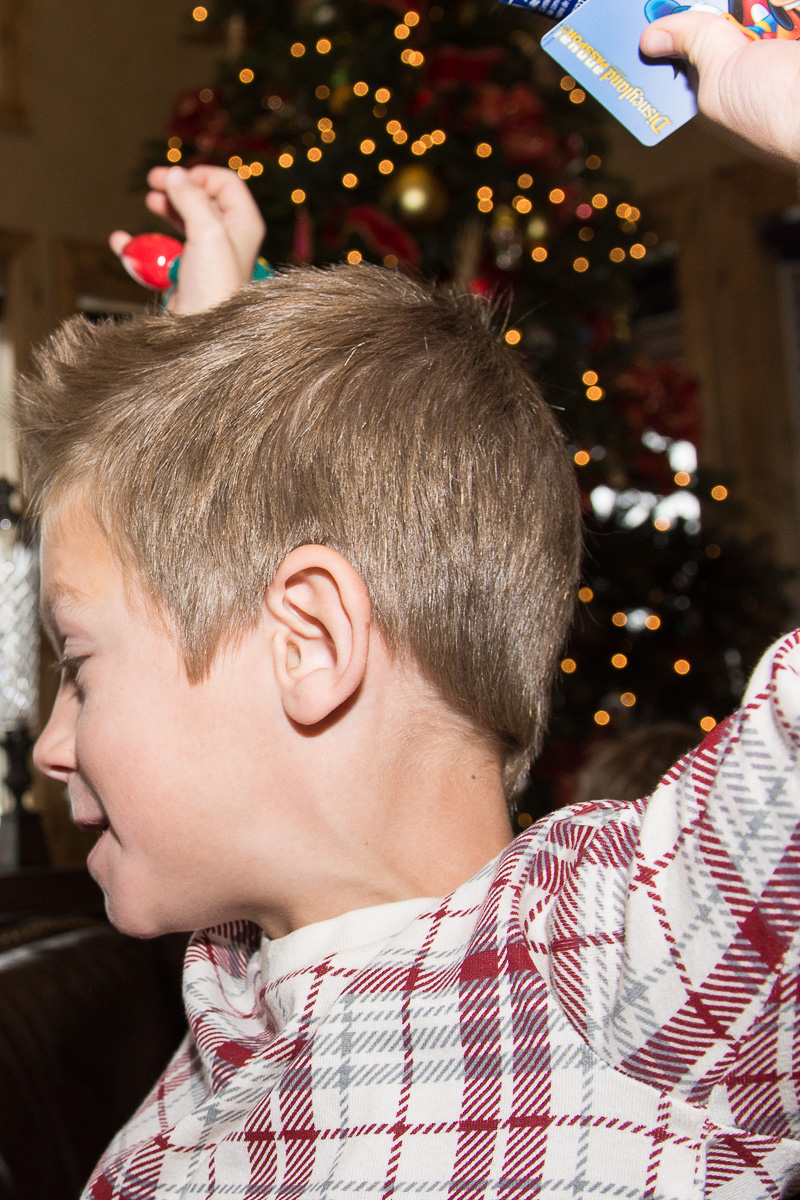 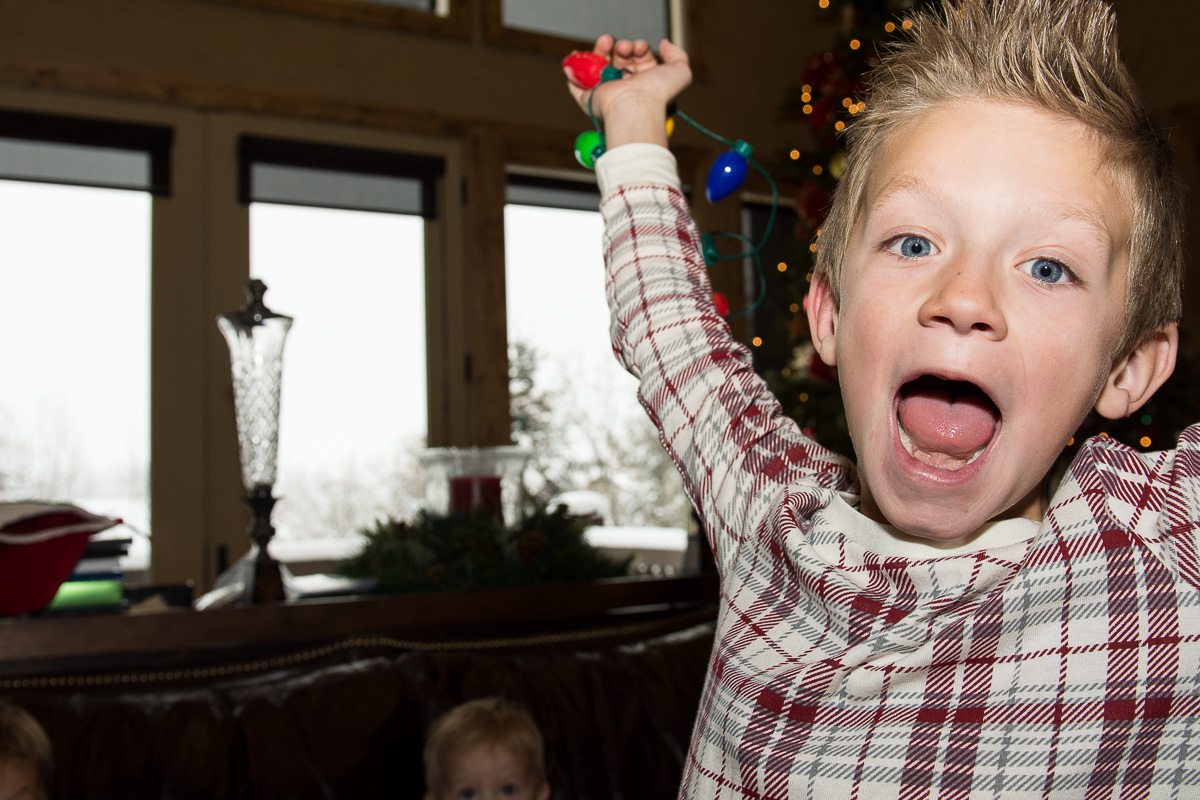 We took a break from opening presents mid-morning to get ready for church since Christmas fell on a Sunday this year. We made the trek into the snow and enjoyed music and messages at the local congregation. After we got home and ate a leisurely lunch, we dove in to a couple more hours of gift opening. I love that we open gifts one by one even if it takes longer than tearing into them all at once. I think it helps my boys especially to take time to be grateful for each gift. And I like to watch the reactions from the both the givers and receivers.

We unwrapped every last gift and just like that it was over. We planned for weeks and then in a few hours time, it all came crashing down. All that we did to cultivate a spirit of Christmas reached a climax and in a blink of an eye, it was done.

Thankfully, Christmas break was just beginning and we had the whole week to enjoy our white Christmas.