After our unforgettable day on the Andaman Sea off the coast of Phuket, we rushed back to the hotel to shower, grab our bags and catch a red eye flight to Beijing. Since we had to stop for a layover on the way back to the US, we decided to make an entire day out of it. We knew we would be tired after a few short hours of sleep on the plane, but we didn’t know if/when we’d have the chance to go to Asia again. We wanted to catch a glimpse of China while we were over on that side of the planet.

We had about 12 hours to explore before our connecting flight to LA. We were able to get temporary visas at the airport which was much easier than going through the standard visa process months in advance. We met up with our guide and driver for the day and were able to store our luggage in the car.

Our first stop was Tiananmen Square and the Forbidden City. 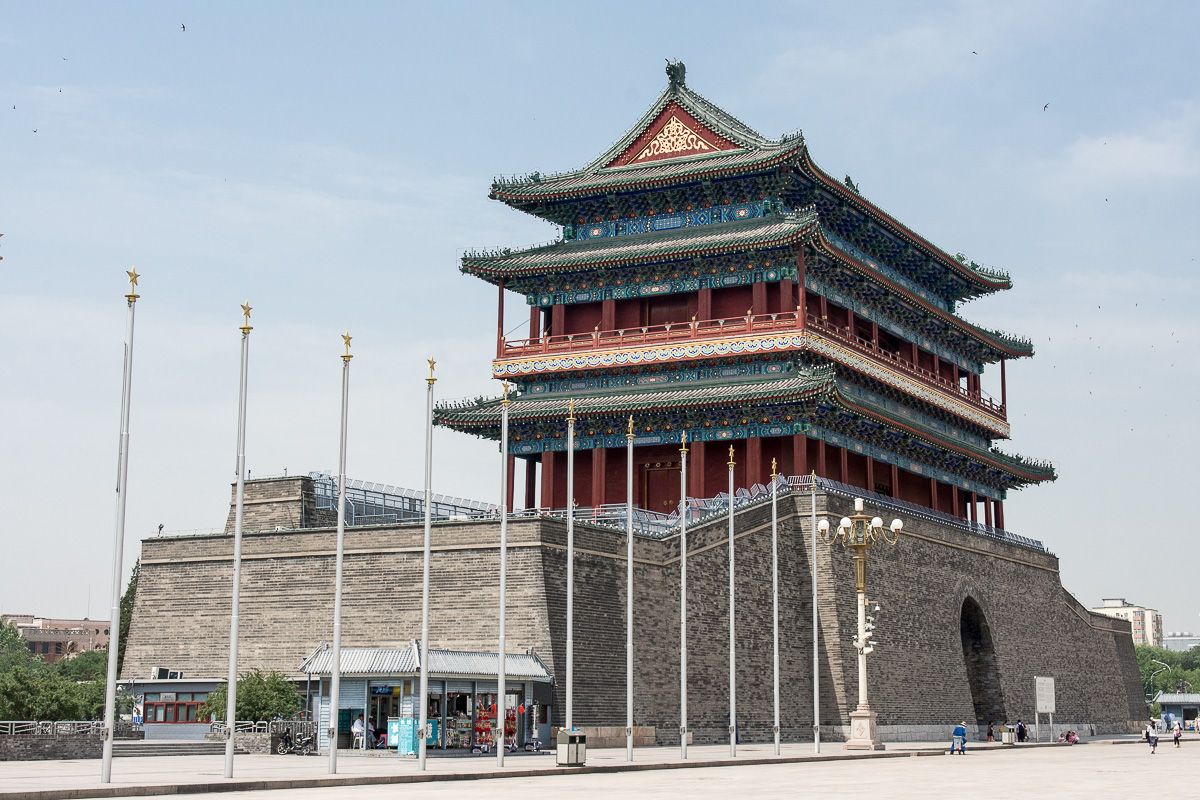 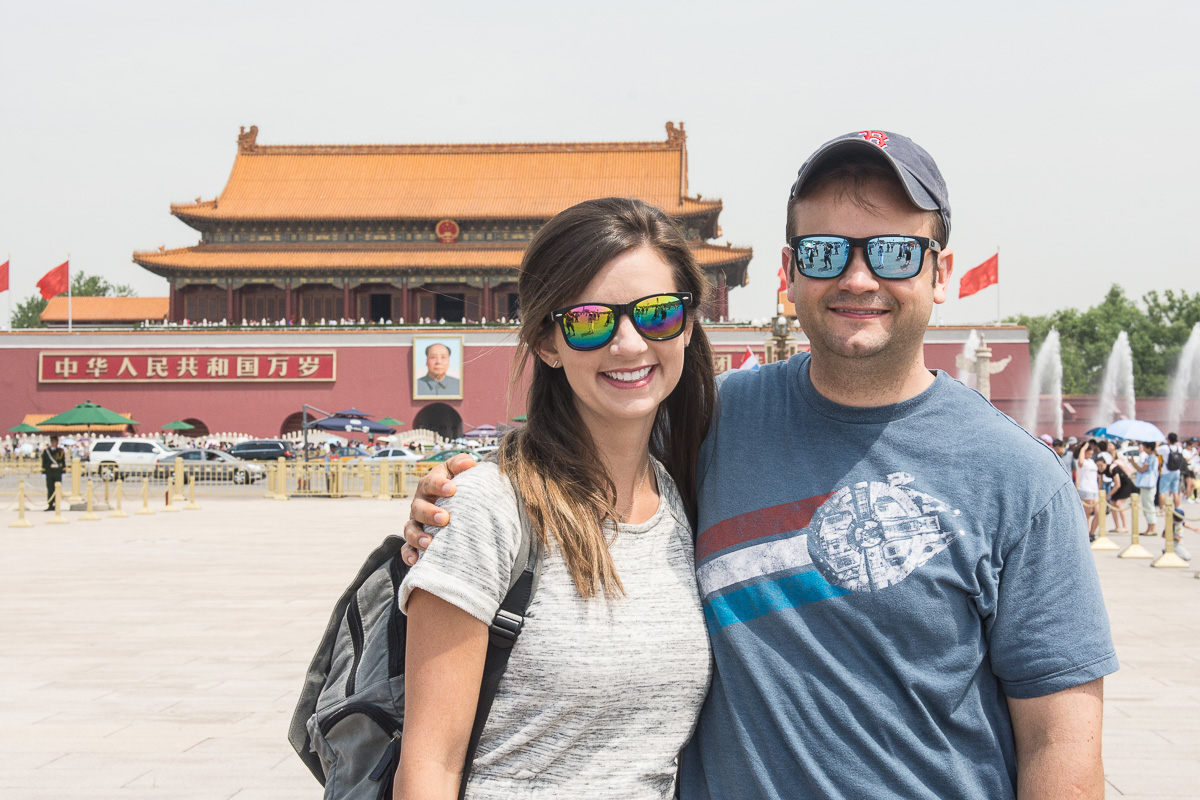 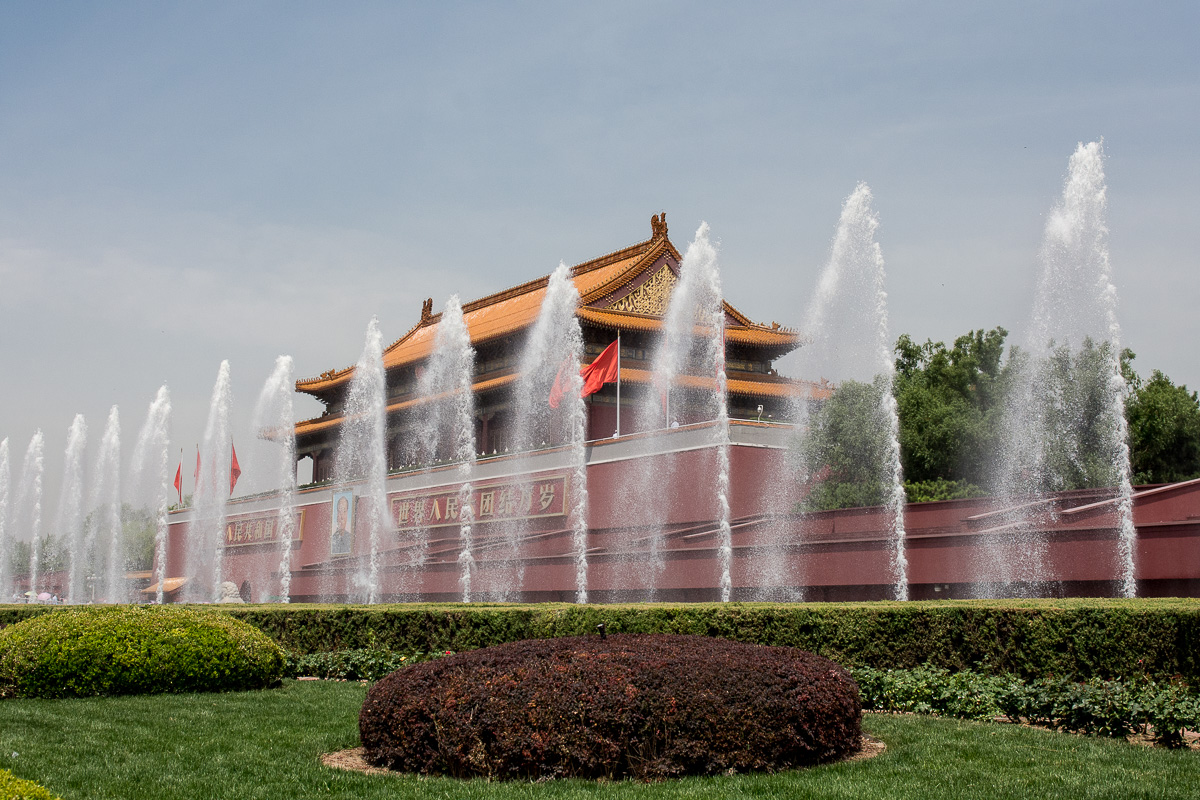 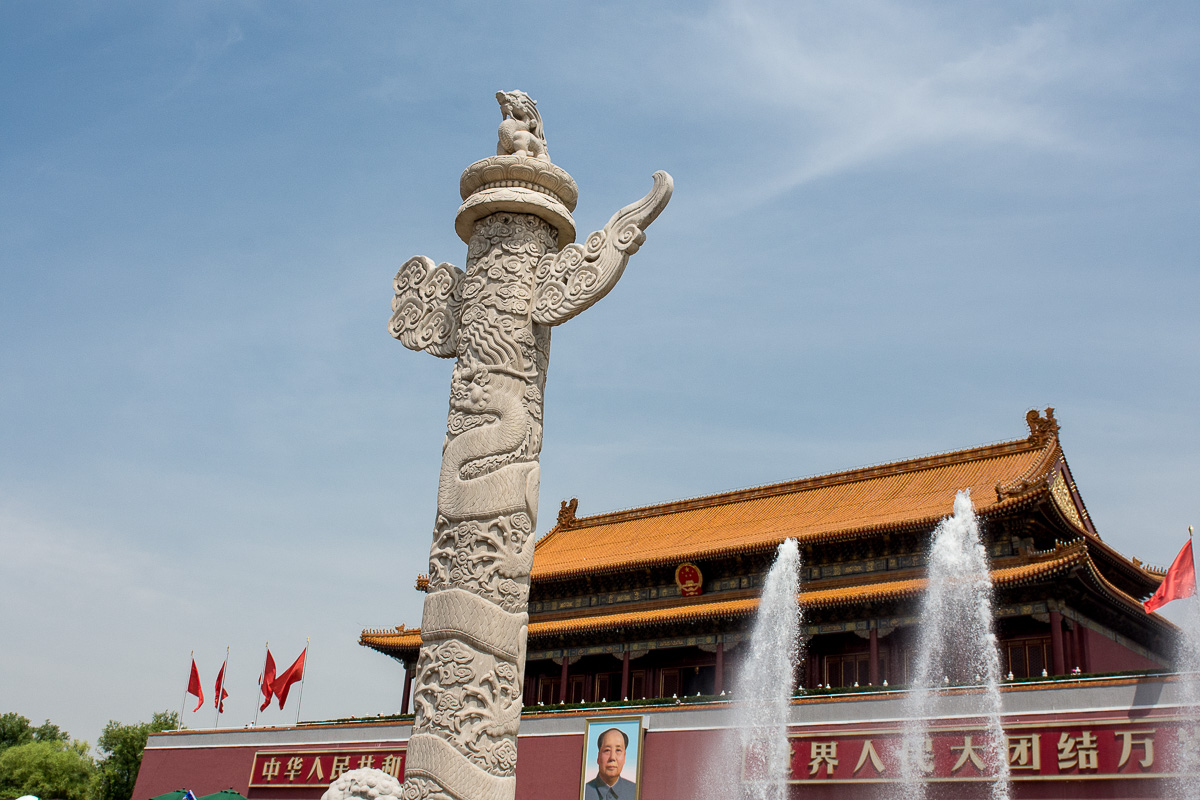 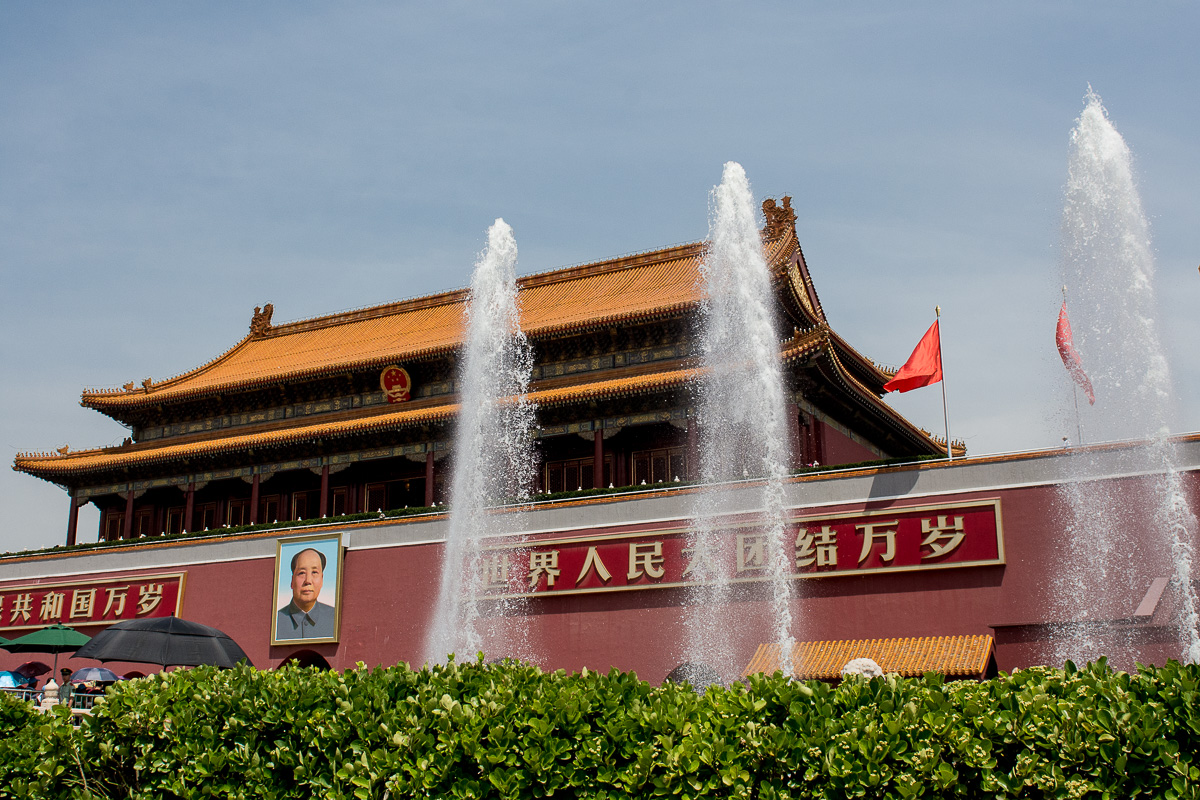 The Forbidden City is where the Emperors lived for 500 years (from the Ming Dynasty to the end of the Qing Dynasty). It was home to 24 Emperors. We went through where they lived and ruled. It was sad to think about how the Cultural Revolution destroyed so many of the important cultural relics and so much of the history of this country. 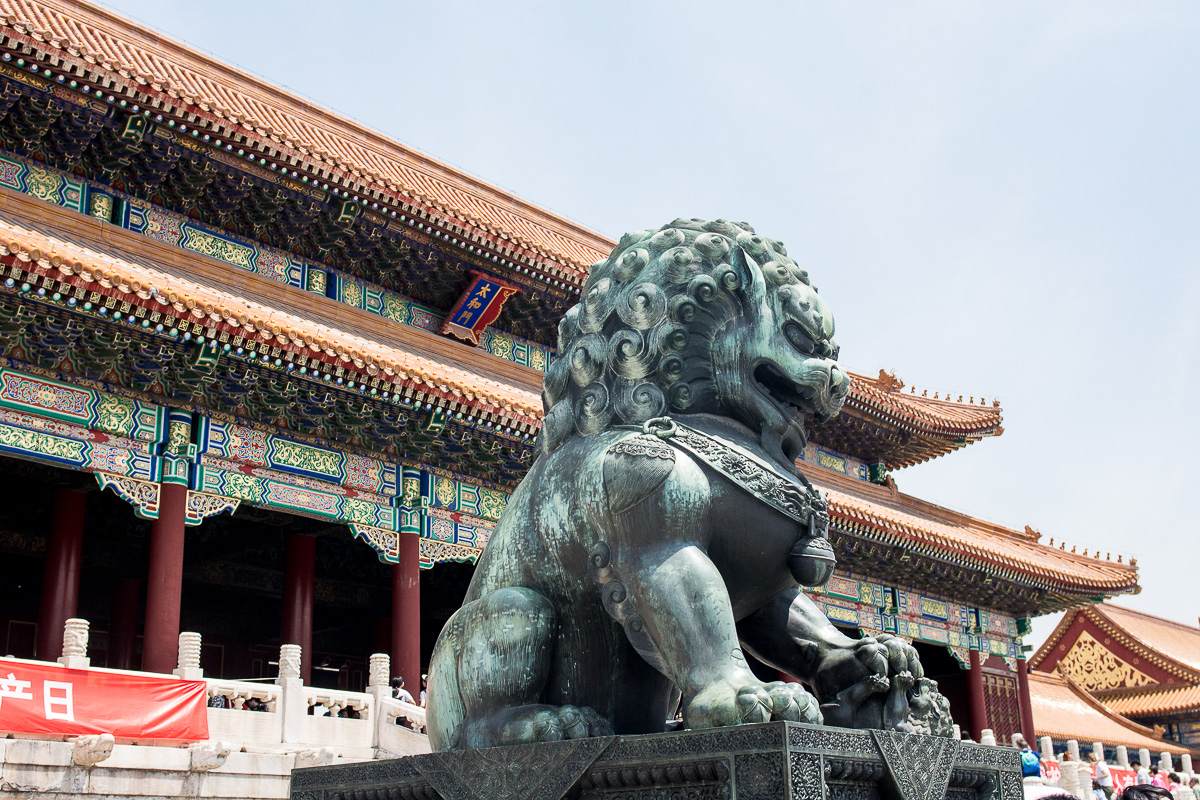 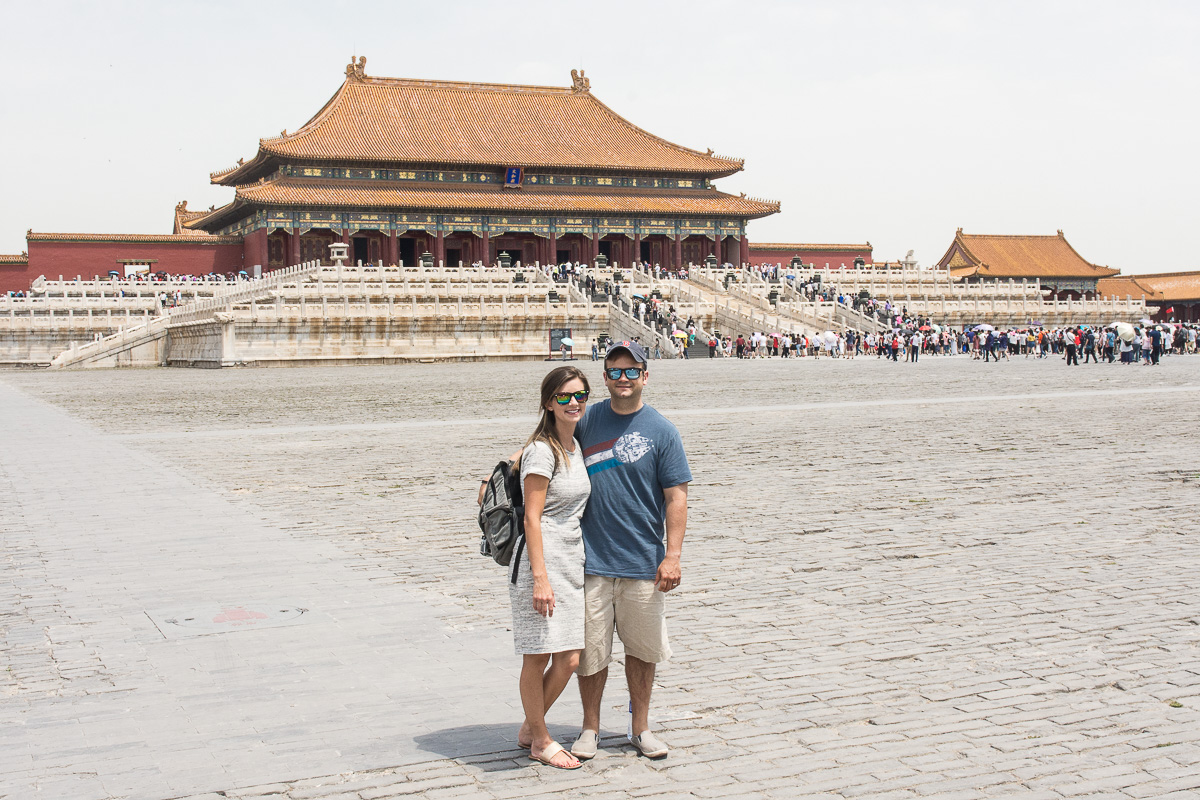 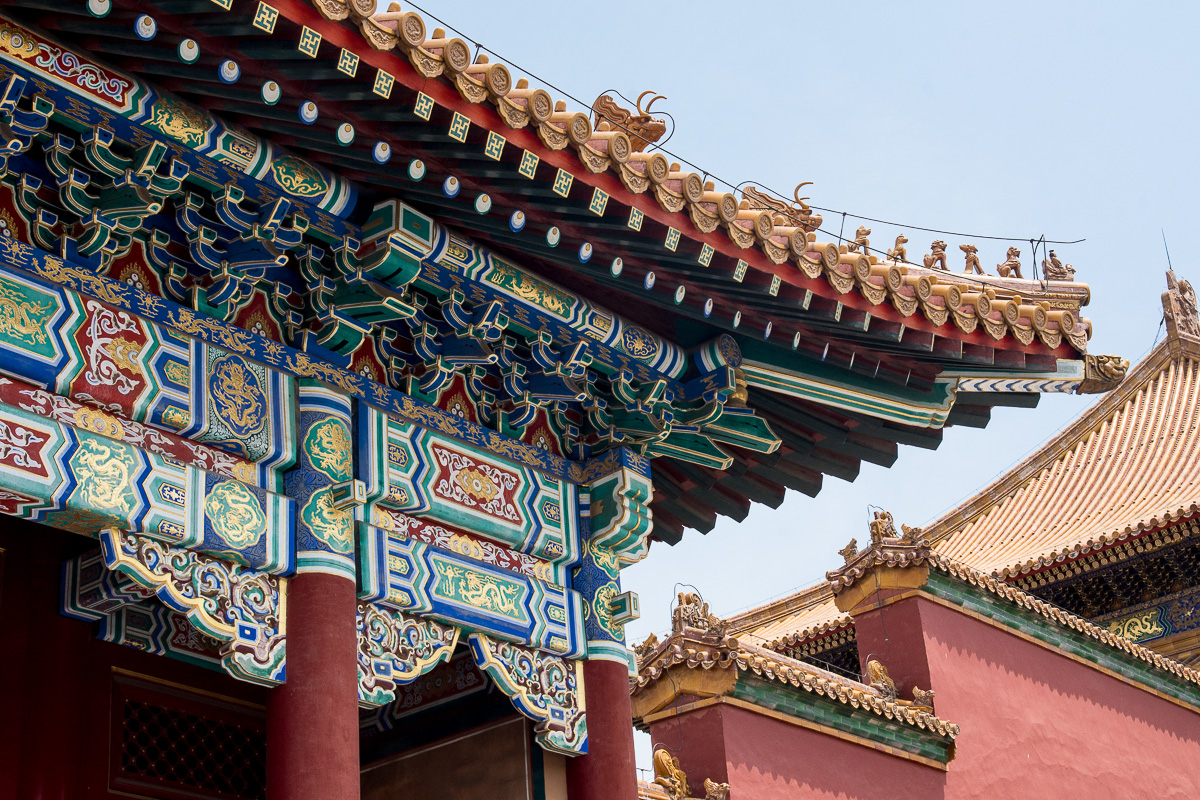 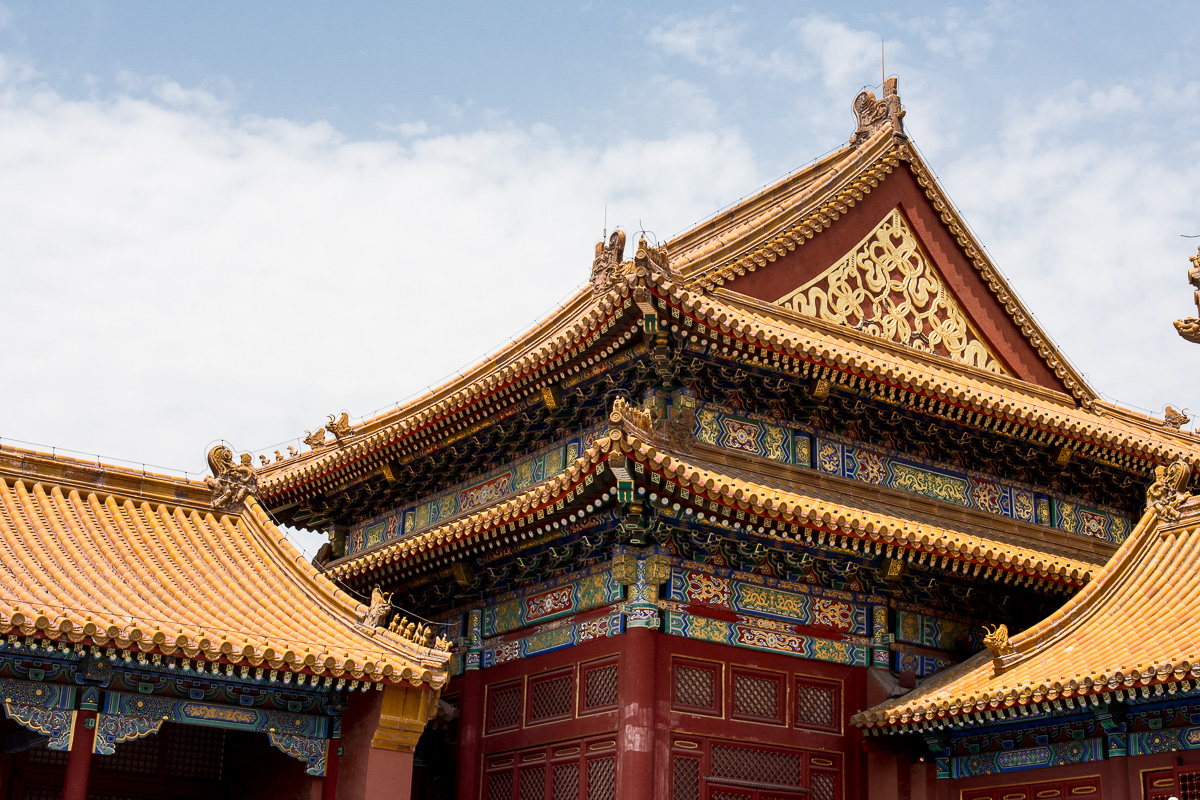 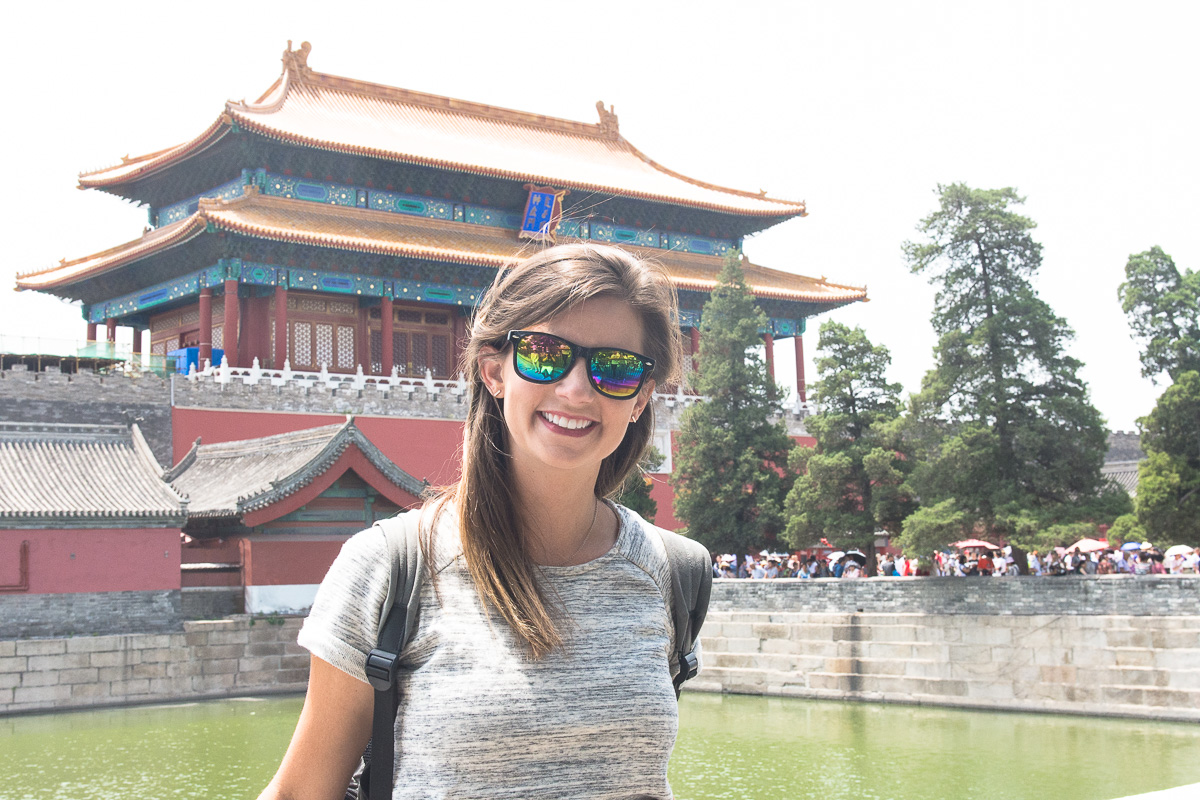 I can’t remember why Troy was making me laugh. But I do remember that every time we took our sunglasses off, people came right up to us and stared at our blue eyes and then got their family members to do the same. It didn’t bother us but it did take a little getting used to. 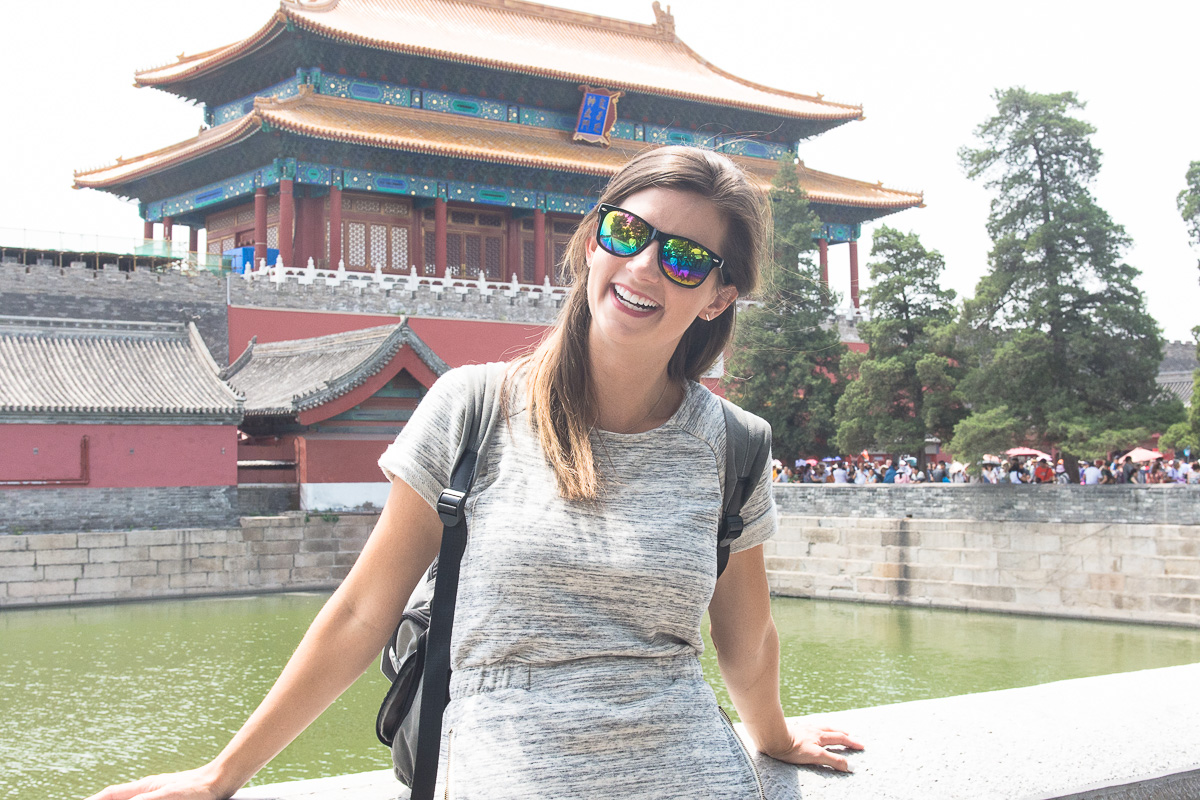 Our guide gave us the choice of Subway or authentic Chinese food for lunch. Of course we chose the latter. I have no idea what the restaurant she took us to was called, but if I’m ever in Beijing again, I’m going to have to have to hunt down a translator and show them this picture because the food was amazing. I was particularly fond of the cauliflower that was soaked in some sort of soy sauce and had so much flavor that to this day I still crave it. 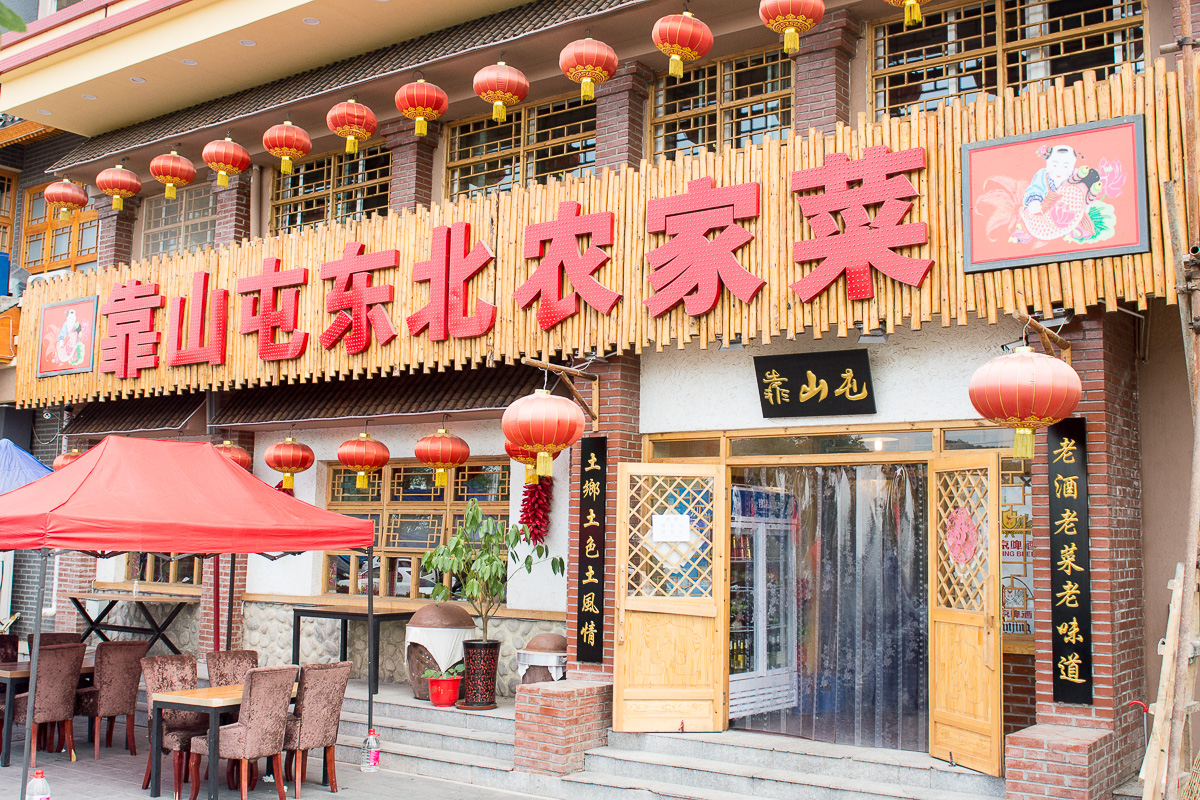 We were so full of excitement to head to the Great Wall next. We took the tram ride up. 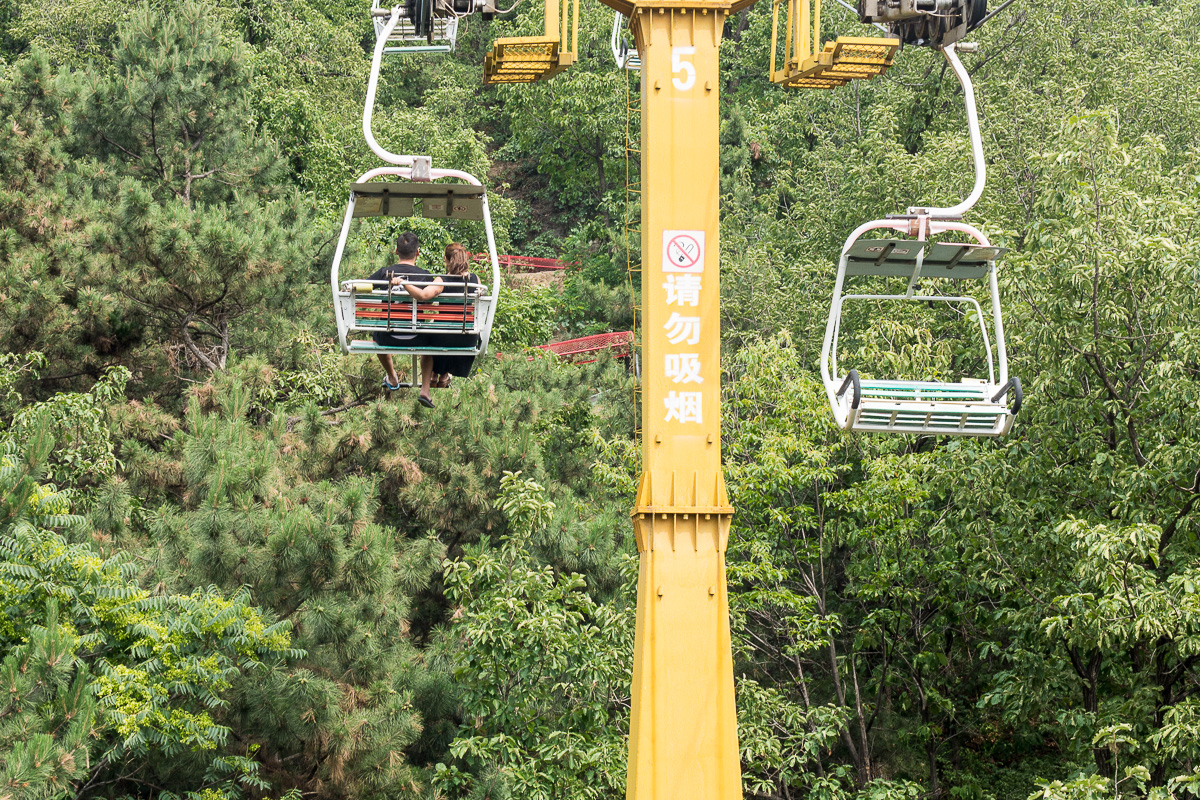 And then BAM! There we were. 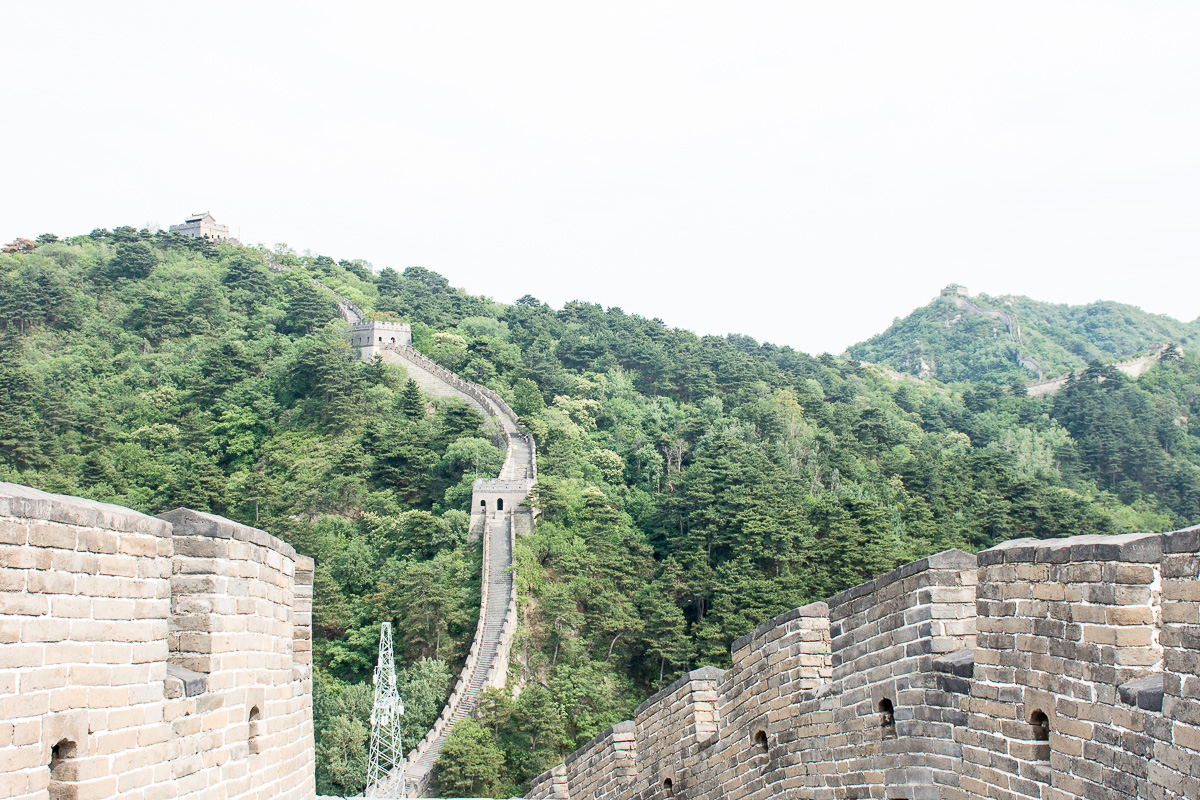 Every time I’ve seen pictures of people visiting the Great Wall it has been flocked with tourists, so I’m not sure why we got so lucky and had it almost to ourselves, especially on such a beautiful day. 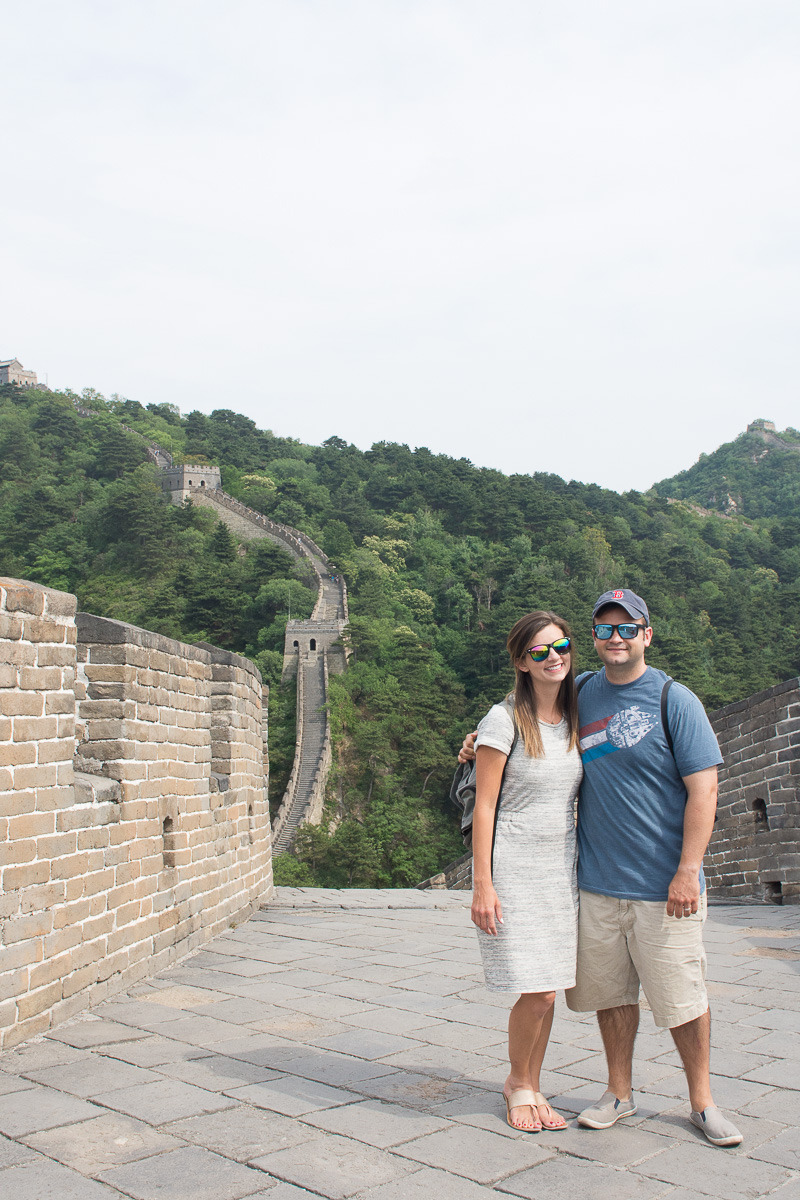 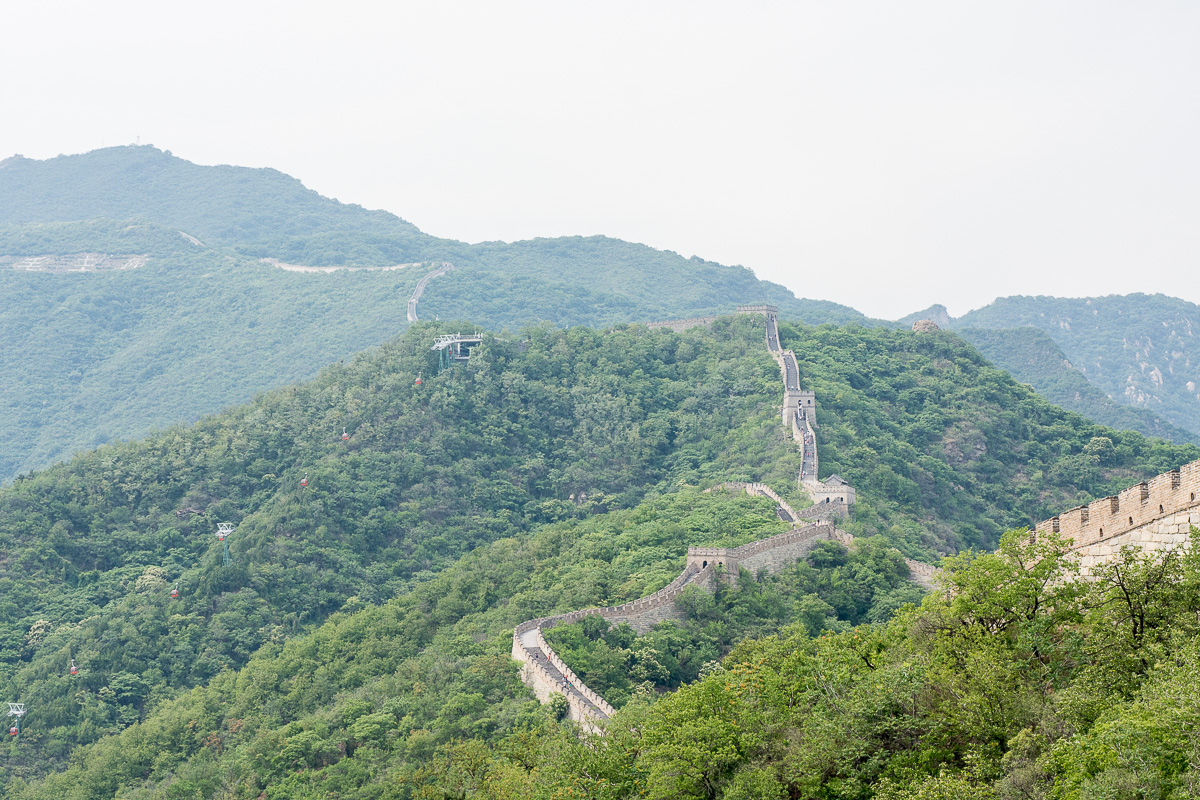 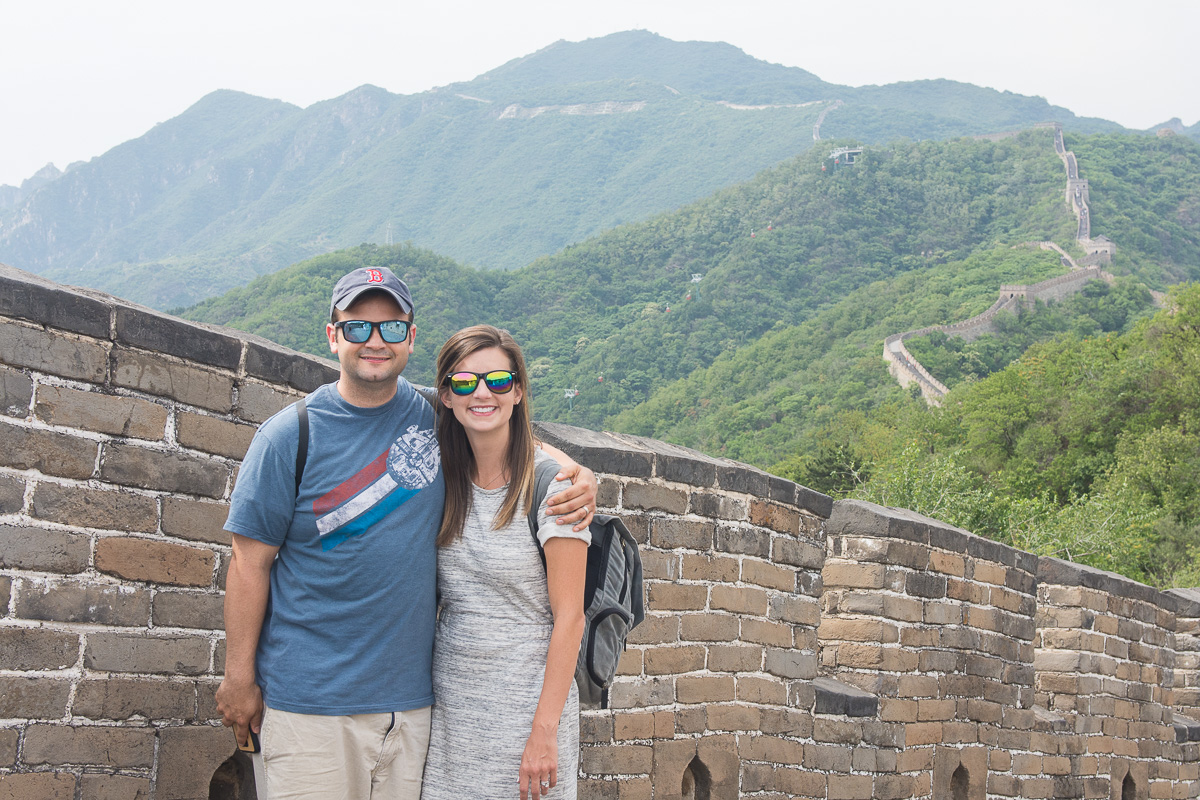 It was fascinating to be there. It made me realize why the Great Wall is truly a wonder of the world. At the time that the Chinese people were laboring on the wall, there were no machines. All of the work depended on manpower. Millions of people worked among the continuous mountains and steep cliffs. They worked facing dangers and many of them lost their lives. When workers died, they were buried right under the bricks. 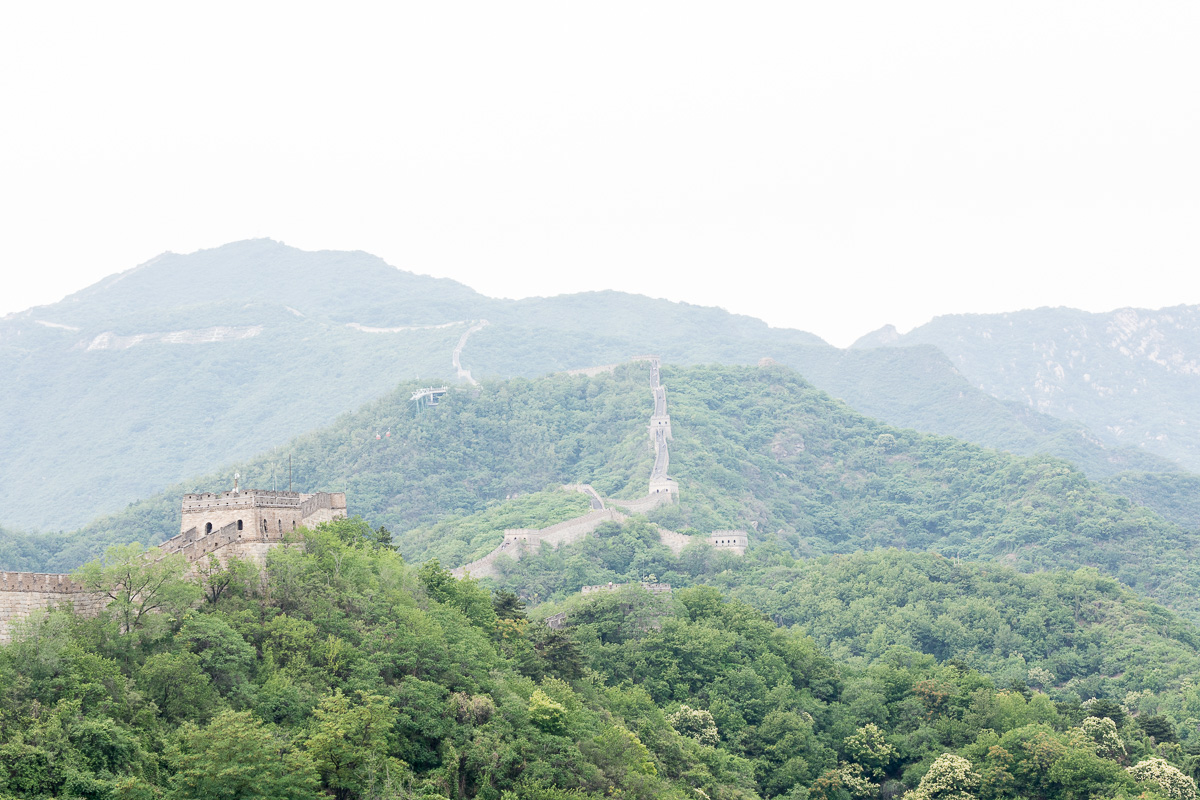 I’d be toast if I had to carry one brick up into the mountains, let alone build grand stairways and walls. 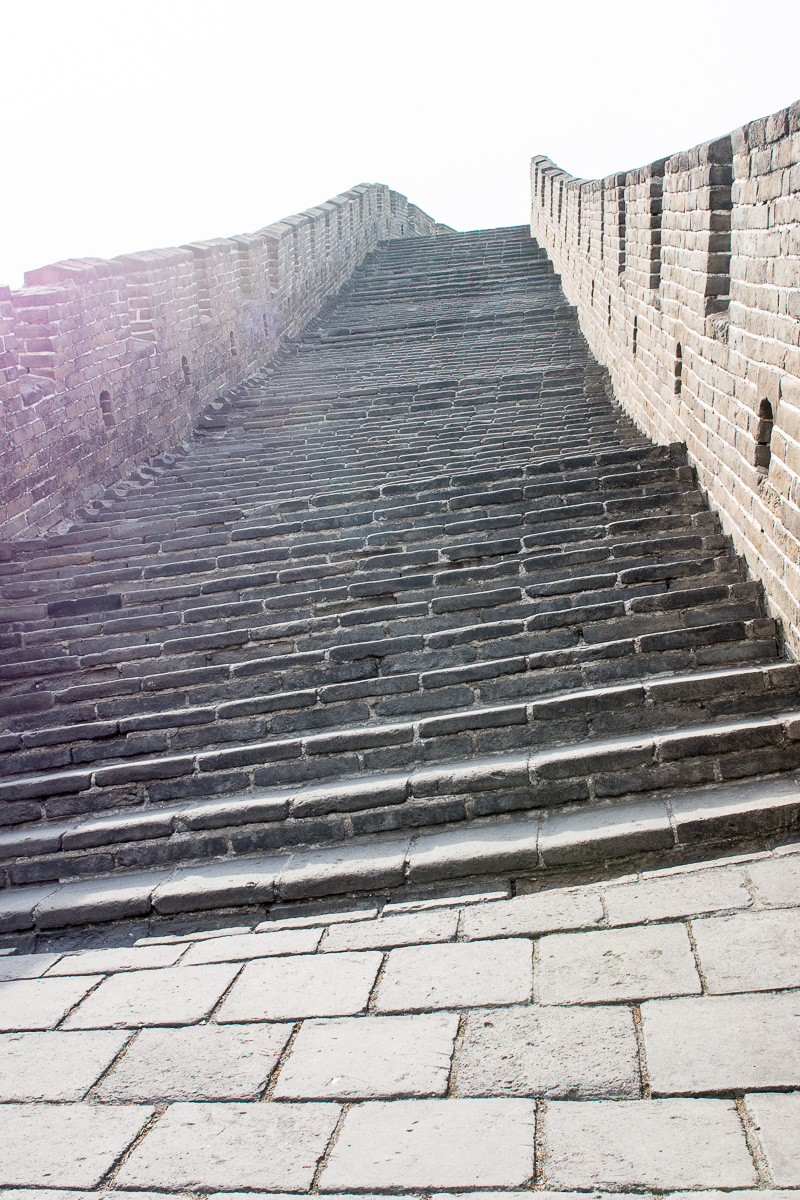 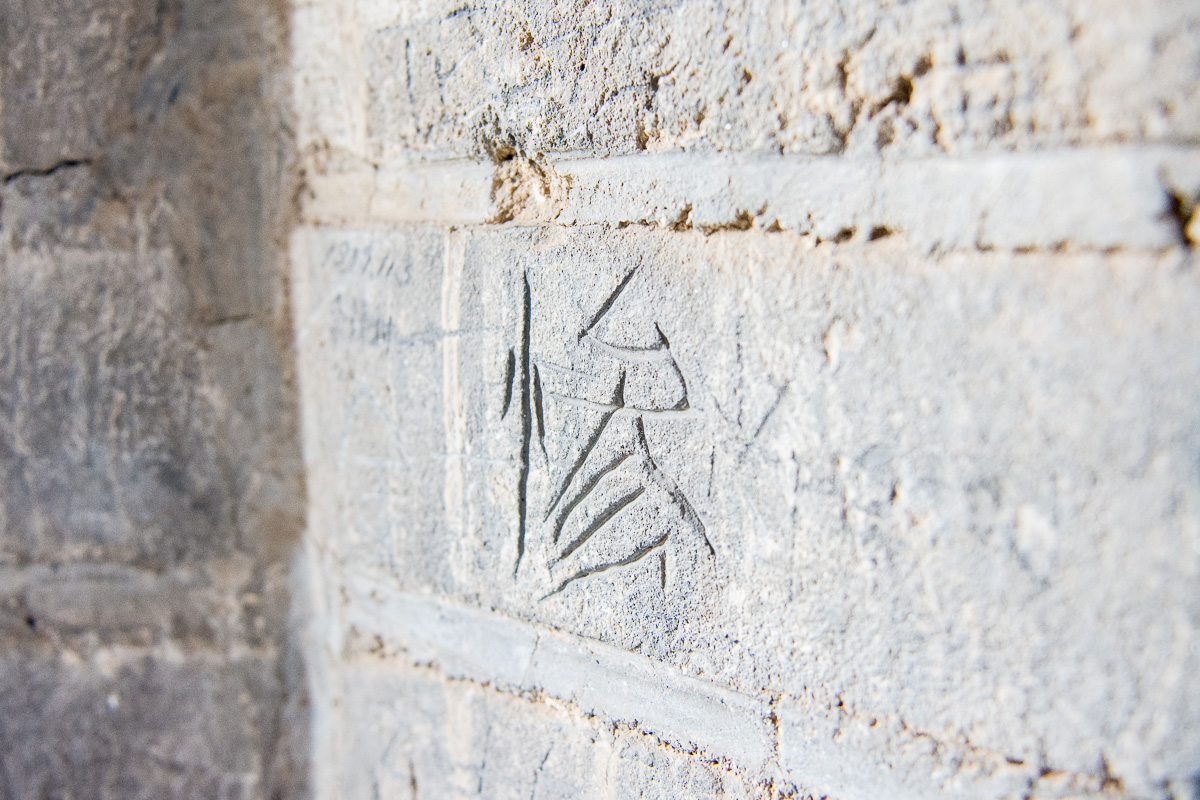 The steps were varying in height and width so we had to really pay attention when we were walking up and down. 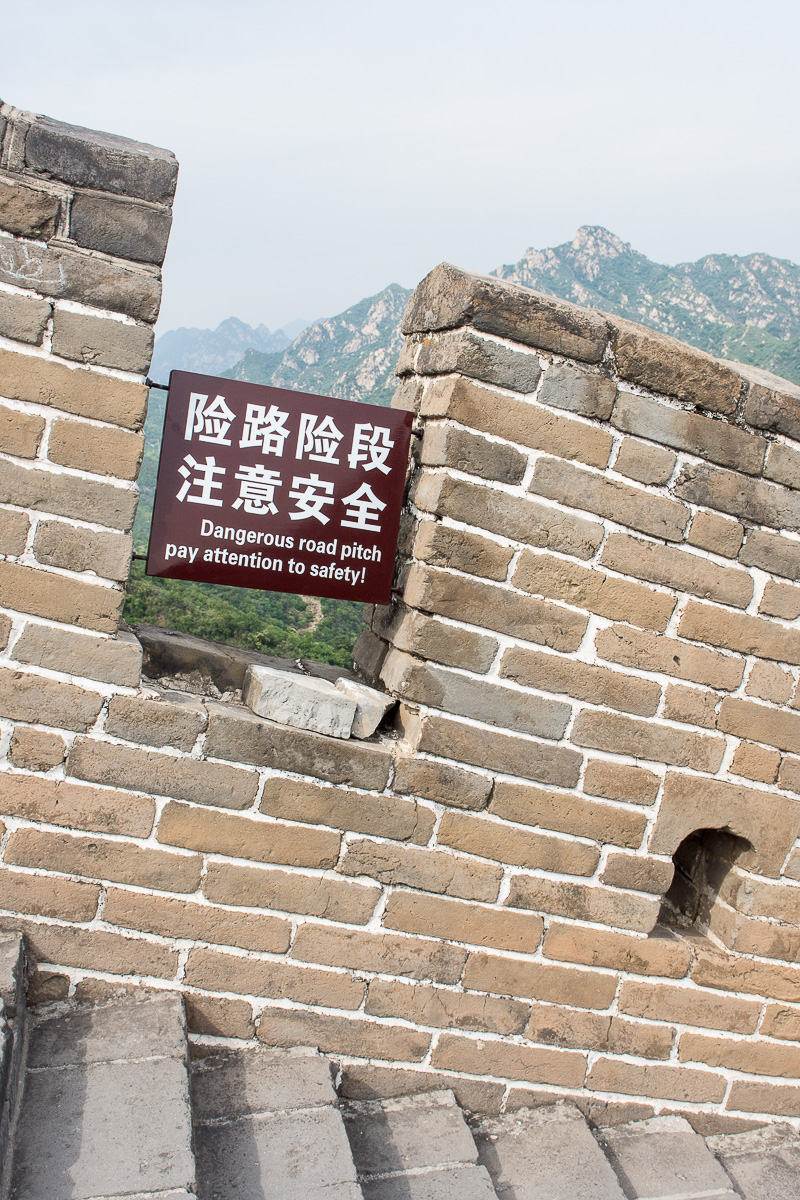 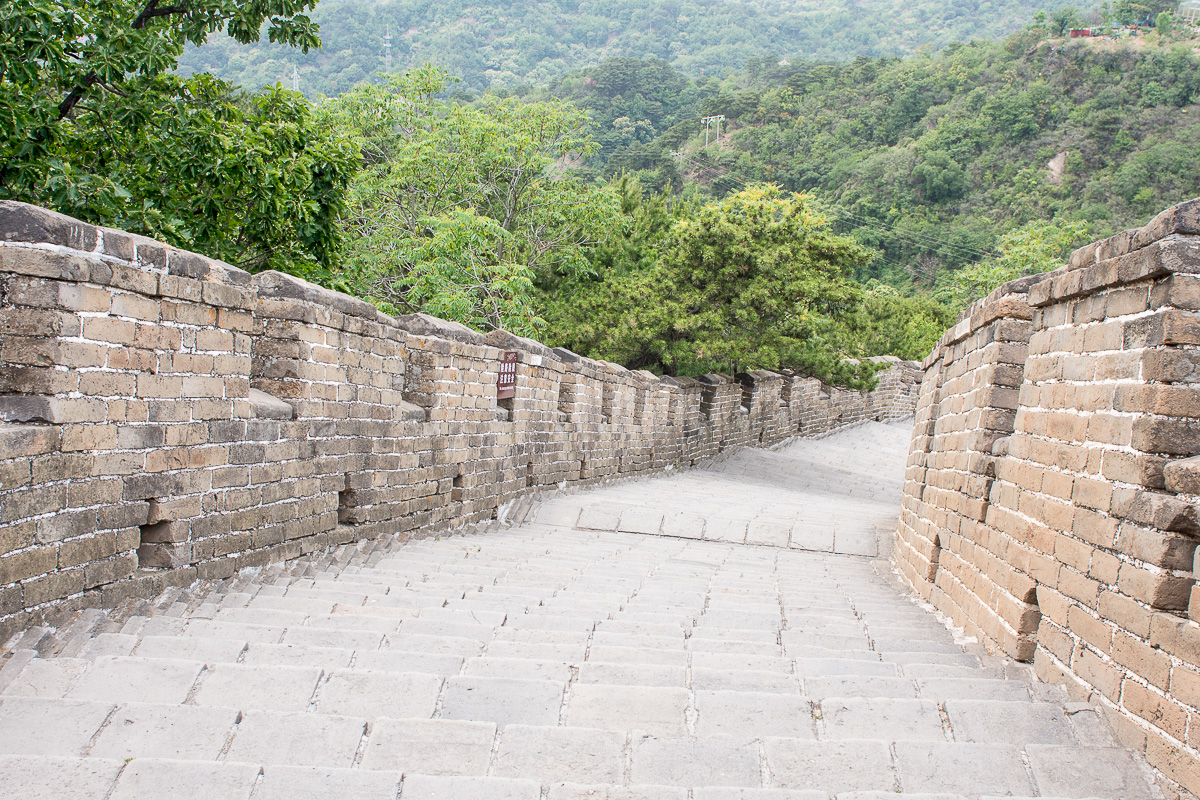 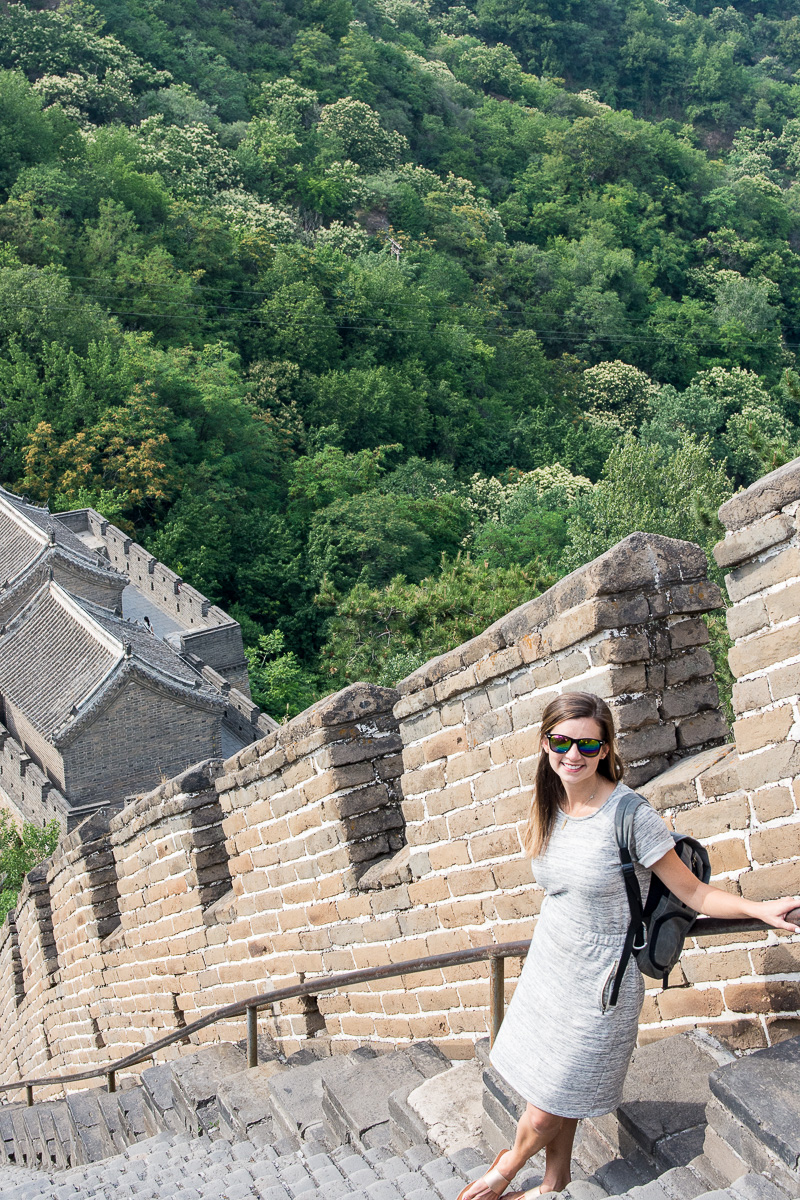 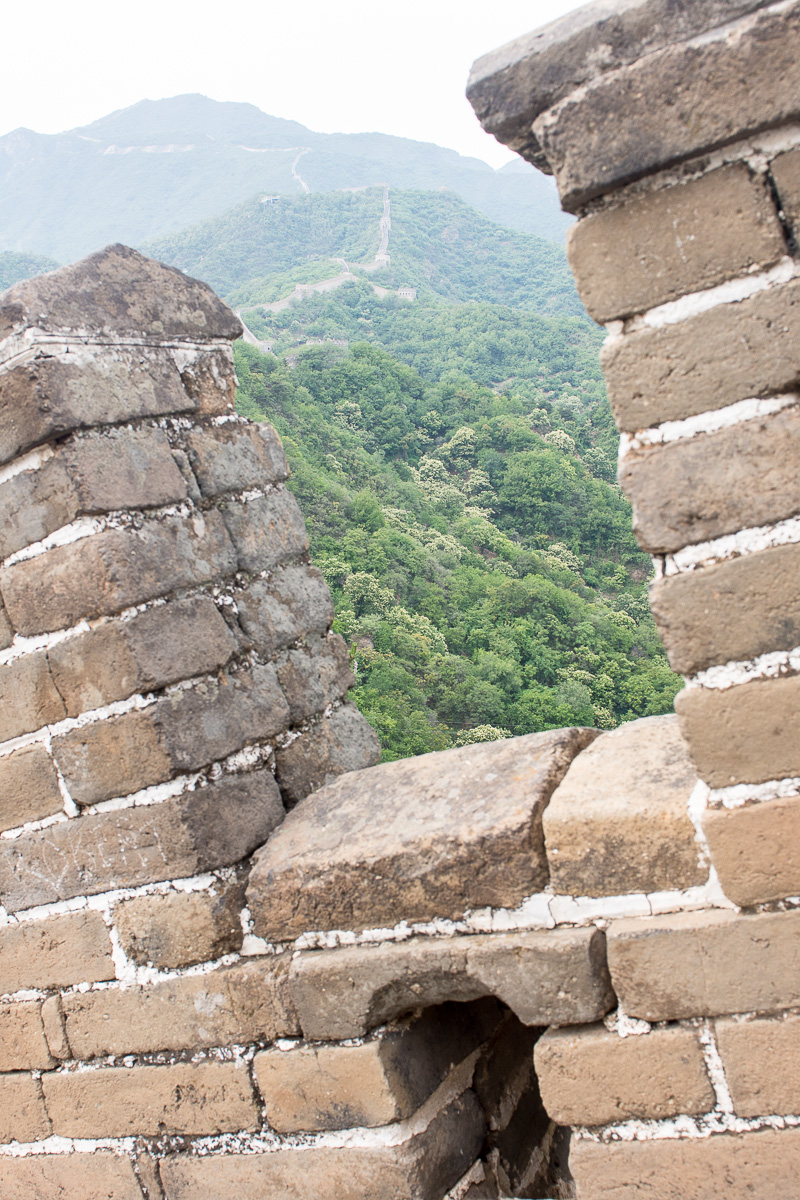 I loved watching this mom teach her little boy all about it. 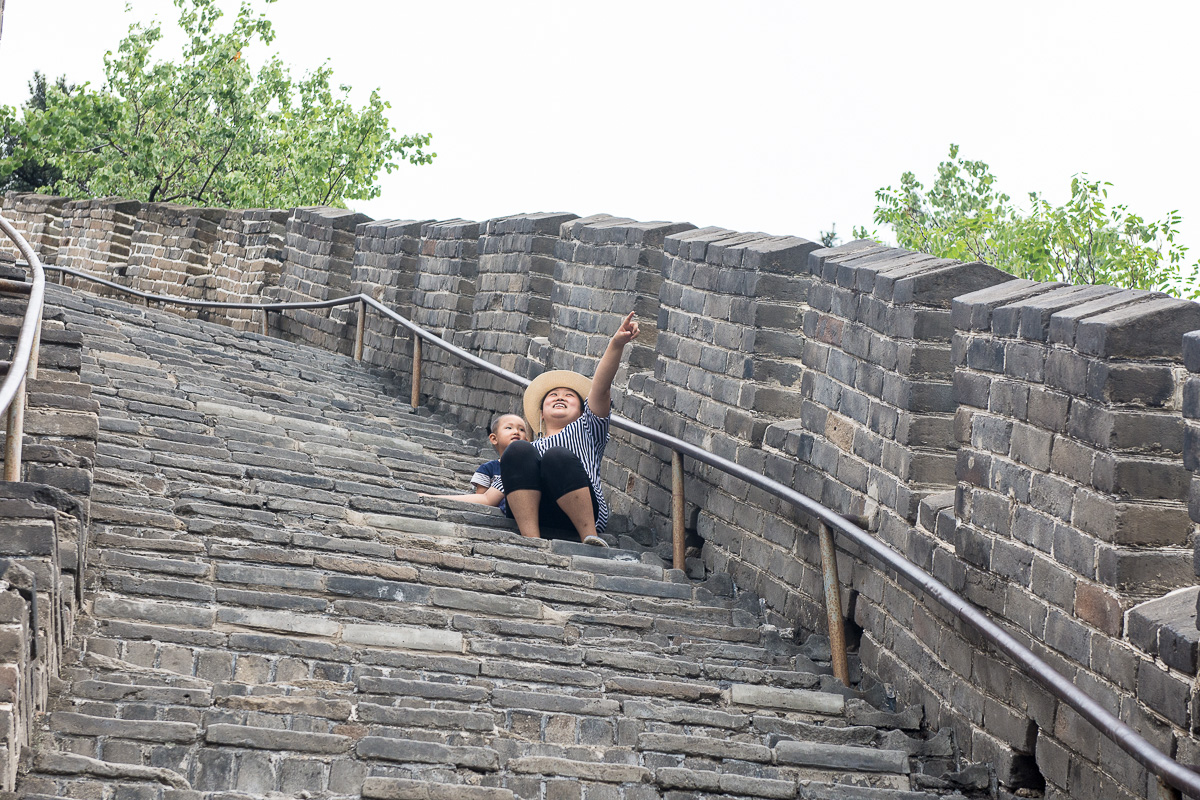 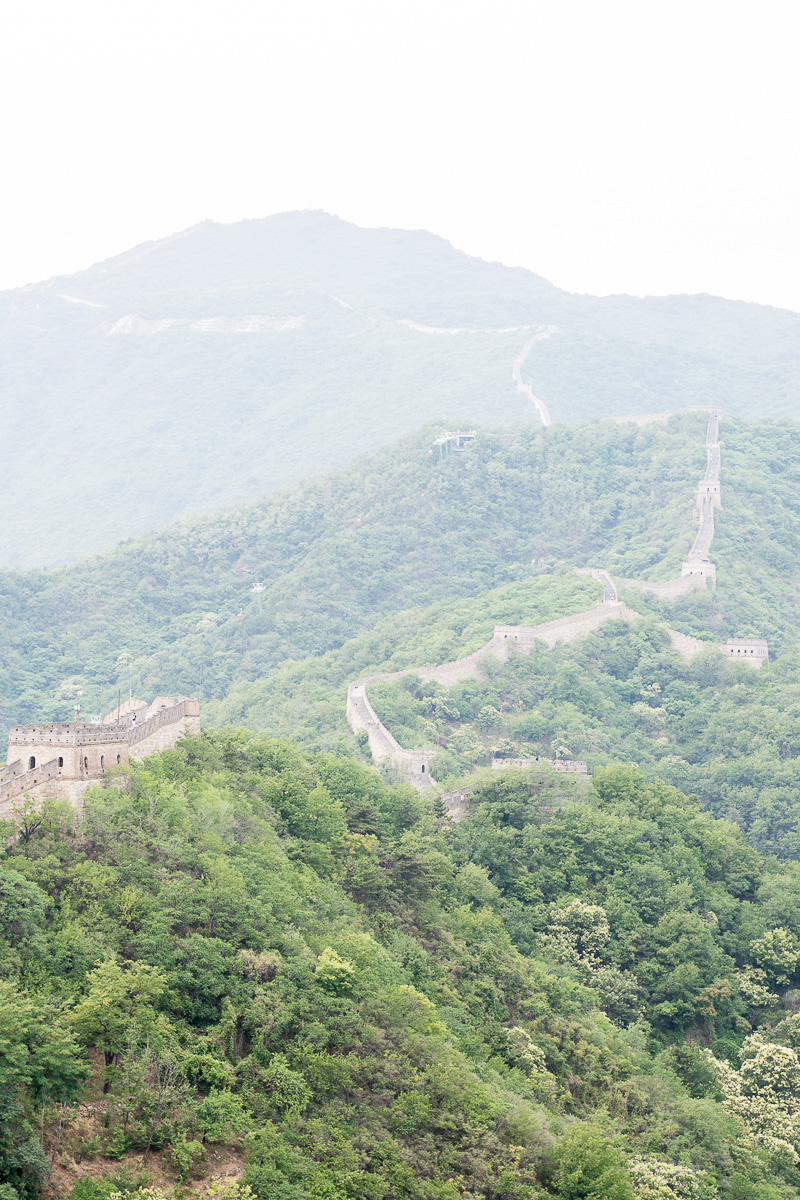 Our guide gave us time to explore the wall on our own and we accidentally walked two towers past where we were supposed to meet back up with her. The towers all looked alike so it’s a good thing we realized we needed to backtrack or we might have seen a lot more of China than we planned. 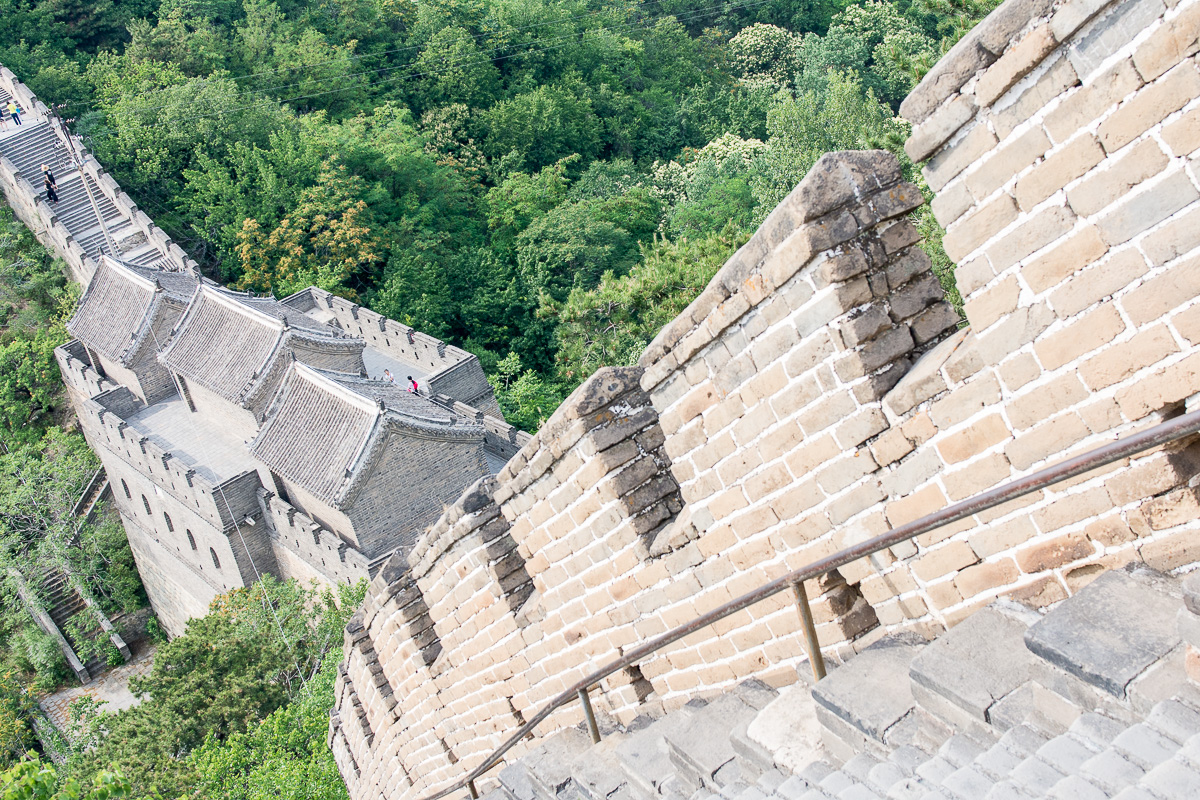 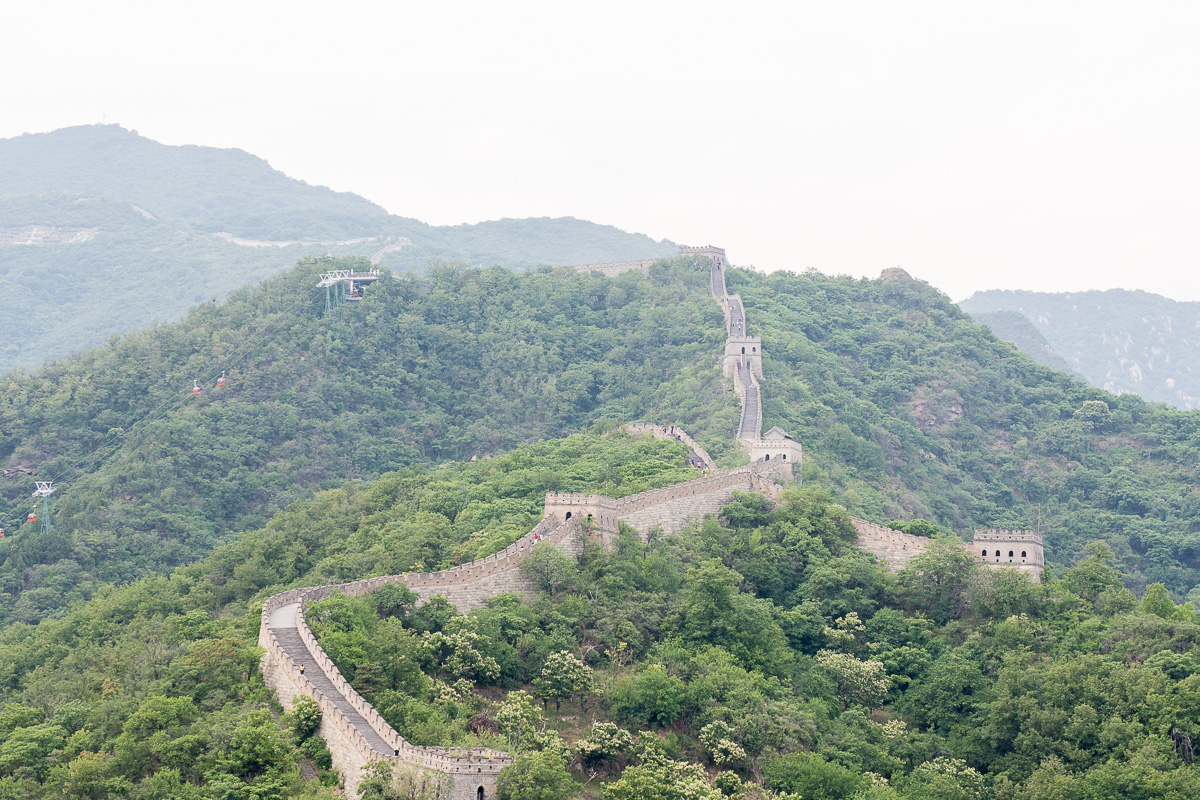 We took the slide back down the mountain and drove back to the airport completely exhausted and completely grateful for the opportunity to see the majestic Great Wall of China.