One of the adventures we were most excited about in Krabi was going on the Emperor Swing.

We went to our designated meeting spot early in the morning. We were surprised when some staff members loaded us into the back of their pickup truck to bring us to the base of the mountain. That wasn’t exactly the mode of transportation we were expecting, but we learned later that it was intentional. Simon didn’t want to give his climbers any false illusions that the day would be easy or laid back. The pickup truck was foreshadowing the rough terrain and difficult trek we were about to encounter. 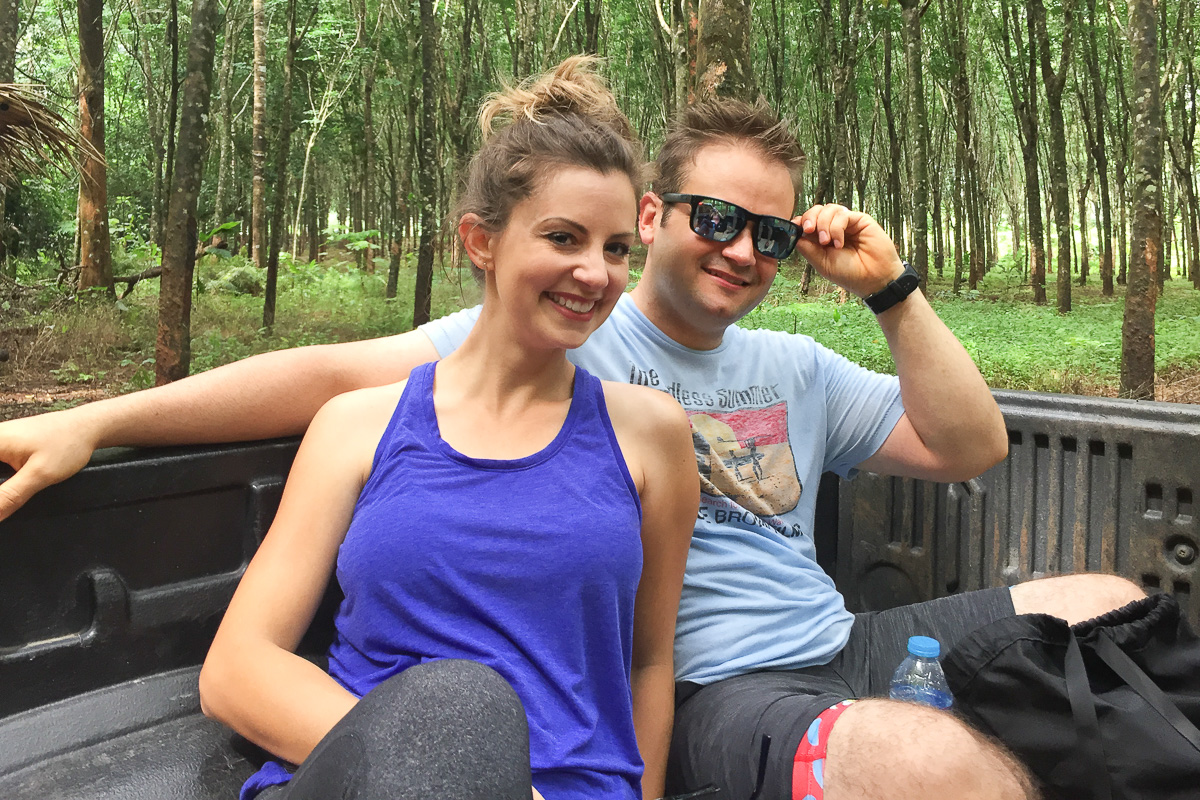 We recieved our gear for the day; backpacks, helmets, safety harnesses and carabiners. Then we began the difficult climb up the mountain. It was about 1600 feet to our destination and steep. Each section of the trail looked different; we climbed up wood planks, ladder rungs, dirt paths and steel ladders. The tallest steel ladder was 22 feet long and led to the main cave. It took us around 2 hours just to climb up the mountain. It was hot and humid and very challenging to make that climb, but it was also invigorating to be in the thick of the jungle. 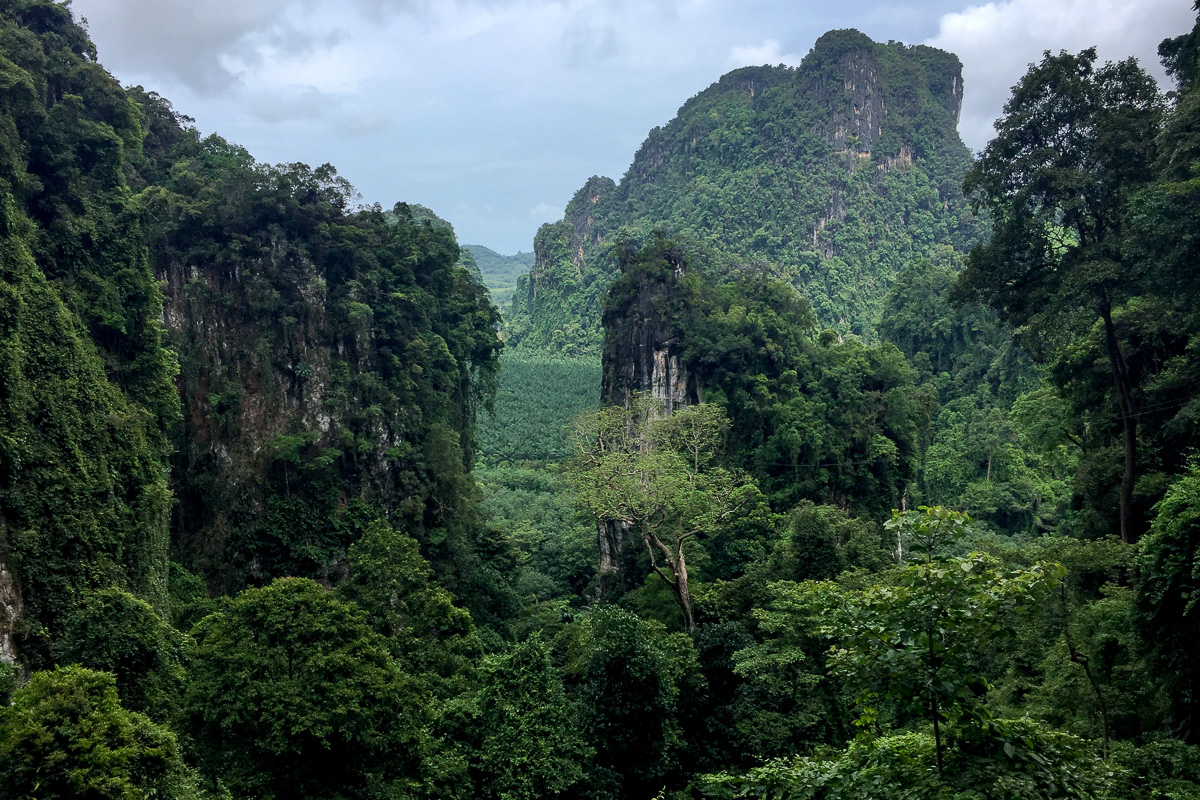 We rested in the main cave for awhile and hoped that the rain would hold off long enough for us to jump. Even on a day without clear skies, the view was still breathtaking. 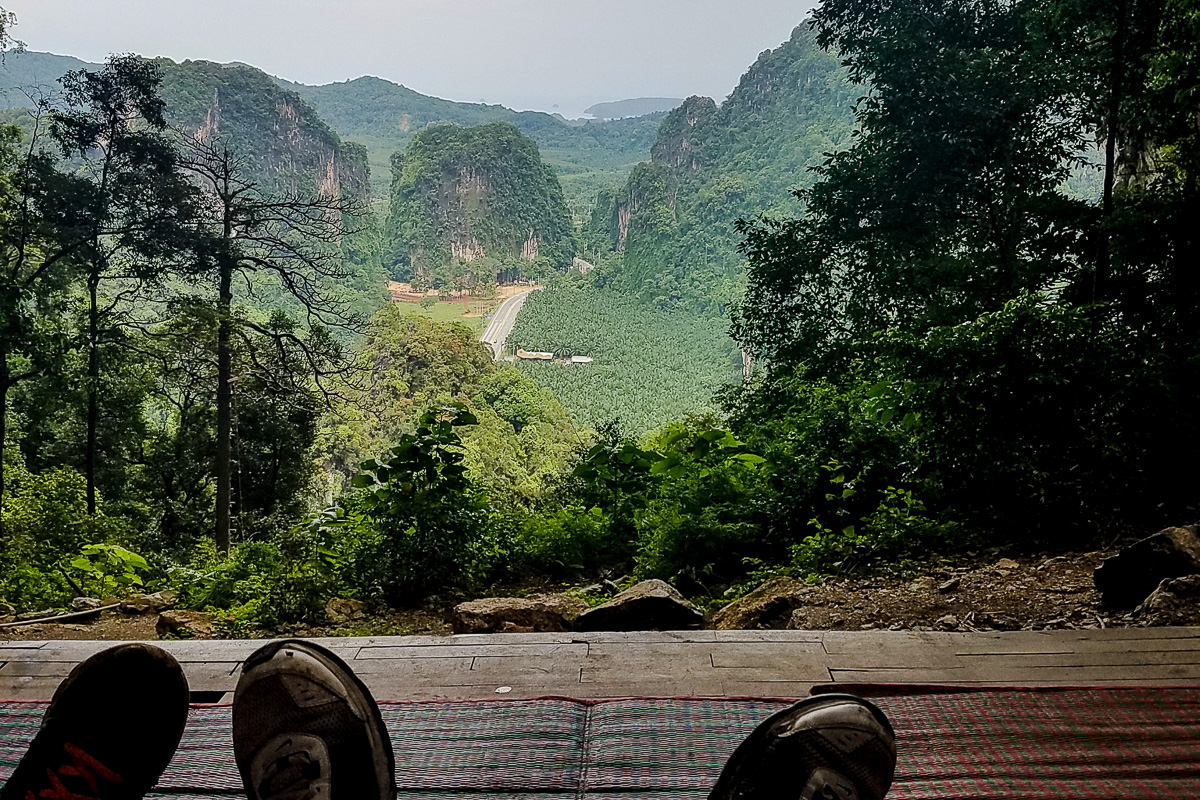 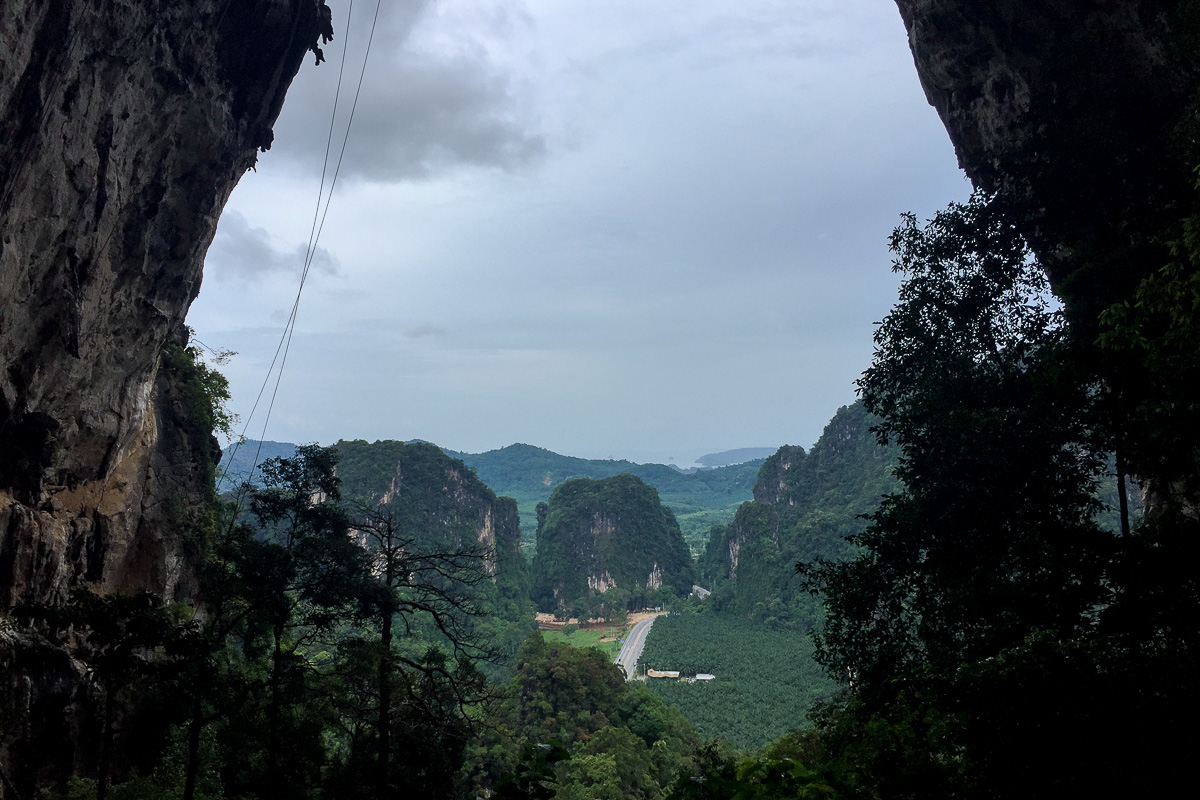 We were absolutely dripping when we reached the top. One hundred percent worth it for what we were about to experience. 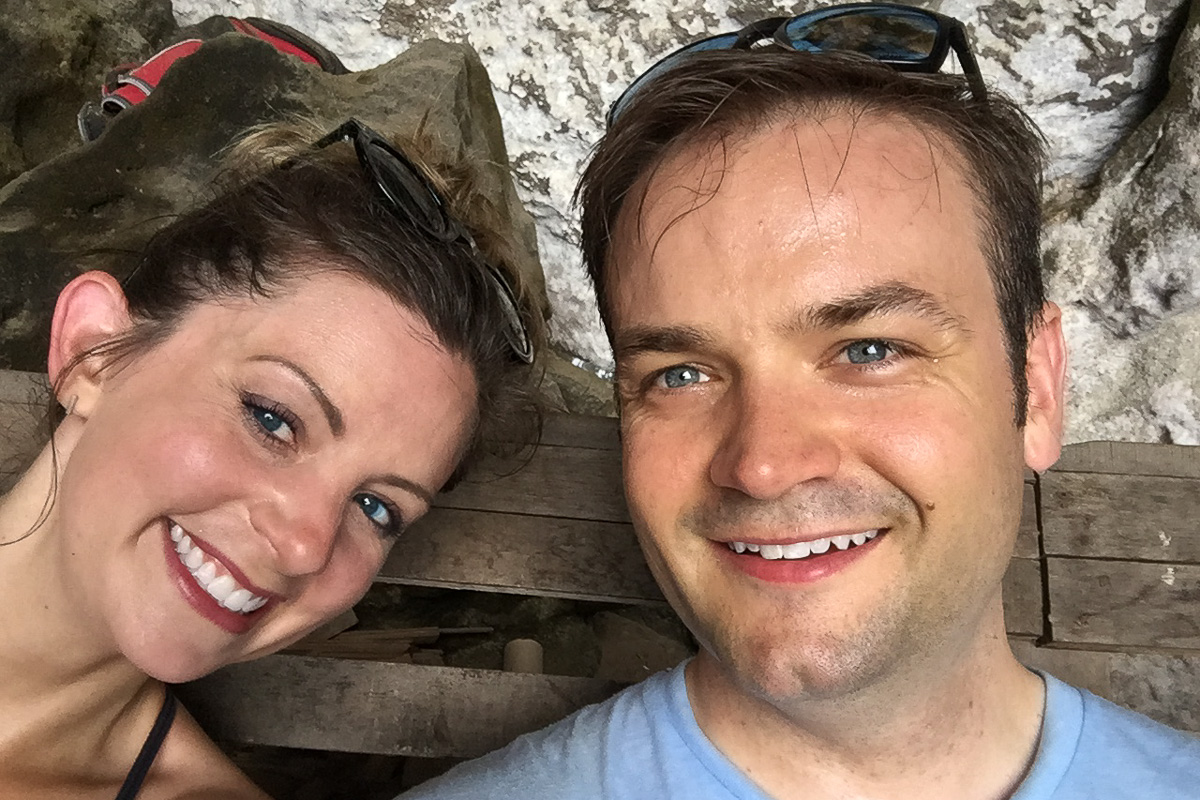 I didn’t take many photos but the video clips explain it better anyway.

I wasn’t nervous to jump; I felt completely safe with the ropes and safety precautions. There are no words to explain the adrenaline rush of jumping off that platform and free falling 100 feet. There was a point when I thought I had fallen enough and then I just kept falling more. I flipped upside down when I was swinging through the jungle and it was exhilarating.

Troy jumped first, then me and then our two friends. Cheering each other on was thrilling. We like to joke that this experience has bonded us for life. 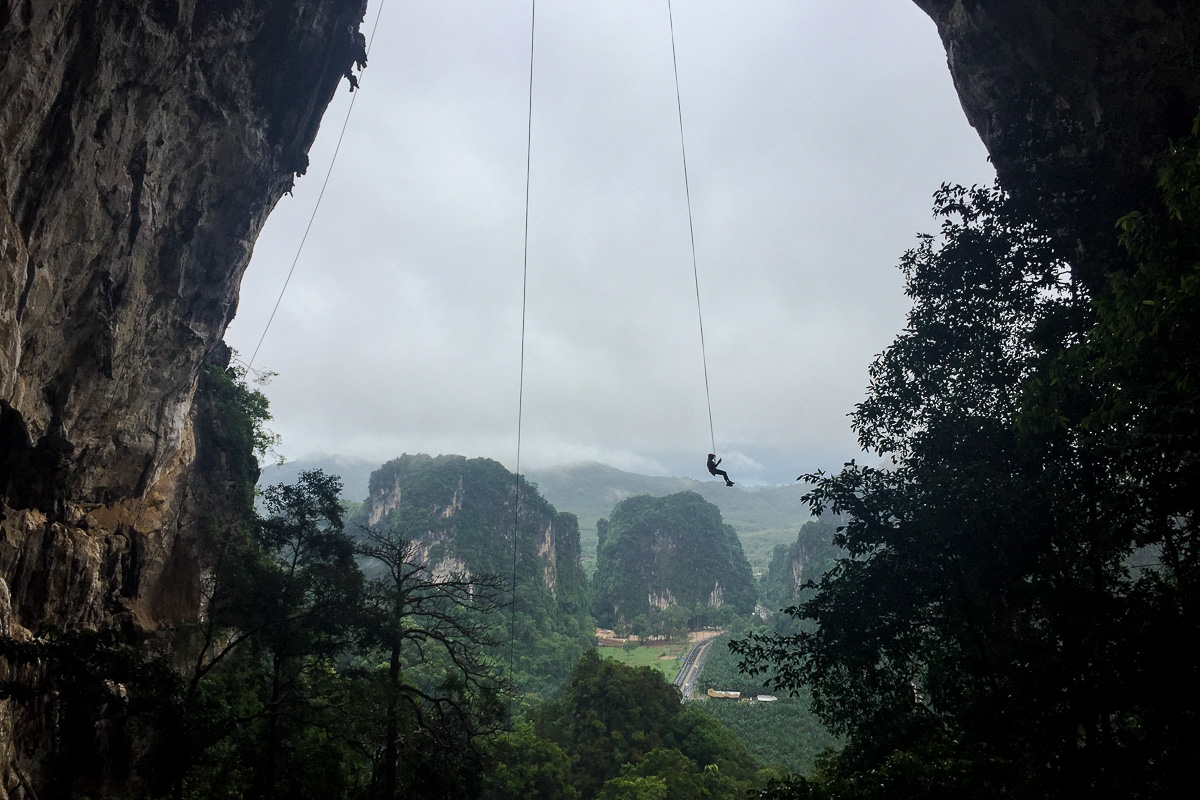 The rain started right as we started to make our way back down the mountain. And once it started, there was no stopping those sheets of rain. The ladders, rungs and steps were wet and slippery and we were all covered in mud by the time we reached the bottom. The pickup truck driver was nice enough to let Kristine and me sit in the cab, but Troy and Jordan got pelted with rain in the back of the truck the entire drive back to the beach. We were on such a high that it just seemed to add to the experience.

We stopped at a massage hut on the beach on the way back to our resort. We were wet and muddy, yet those sweet Thai ladies enthusiastically welcomed us as if they hadn’t had customers in months. I had the best massage of my life that night from a Thai woman who folded me into a pretzel. The combination of sore muscles being massaged and stretched after a psychically exhausting and adrenaline filled day along with sound of waves crashing and rain hitting the roof of the massage hut was the capstone to an experience I will never be able to replicate.