Last summer, we packed up and moved a whole whopping half of a mile. And it took us a year to recover.

Nothing about our move was easy, starting with the house hunting process. We had a limited time frame to end the lease on our rental home and the housing market was on fire.

We made offers on houses from the ER. We made offers on houses from Thailand. Finn locked himself in a bathroom at a showing. Sometimes our offers were in a sea of offers and weren’t even considered. We got very emotionally attached to one particular house but we were up against a cash offer and couldn’t compete. Our offer was accepted on another house but for some reason it never felt right so we passed.

It was a crazy roller coaster in a crazy market to get to the point where we found our home. It wasn’t love at first sight. There were some things about the layout that we didn’t love at first and it took our imaginations to see past the rainbow paint colors on the walls. But the house checked the boxes for our top priorities. It was the right size in the perfect location and even had a tiny patch of a yard – a rarity in our community!

The point where we were both completely sold was after we were in escrow. A neighbor reached out and invited us to a street ice cream social before we even moved in. In our cul-de-sac with only 10 houses, we found out there were 21 children that were elementary aged or younger. Our boys were basically in heaven running around with them at that first social. The neighbors were so friendly and inviting and told us all about the street parties they have for Halloween, Christmas, Easter and 4th of July. We knew after that night that we had made the right choice.

Some of the kids gave us a big warm welcome with sidewalk chalk. 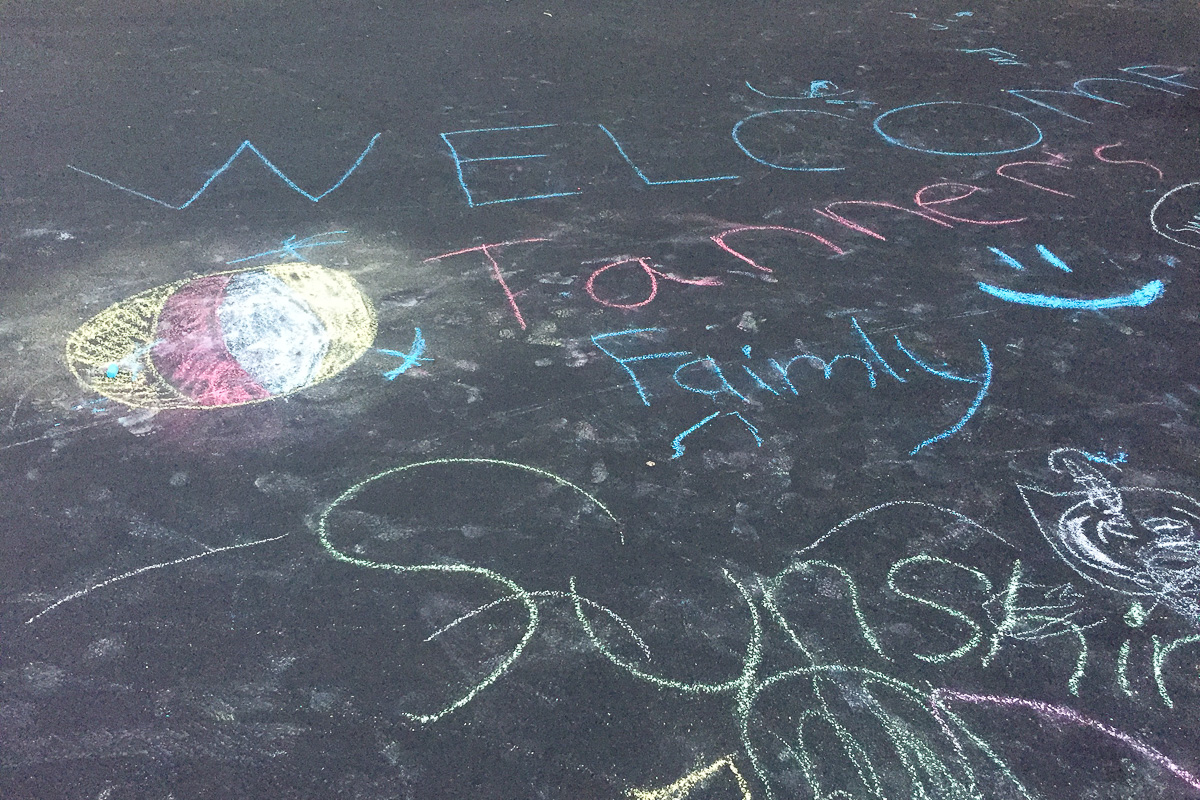 The charming front porch, gorgeous view of the canyon and walking distance to the elementary school, parks, pools, bike trails, the waterpark and skate park were just extra perks. We were so happy that the boys wouldn’t have to change schools. We did cross the boundary into a different church congregation, but the boundaries are so small in our community that it would have been difficult to stay in the same ward. From the beginning, we were hoping to either stay in the same school or the same ward, so we made peace with changing wards. 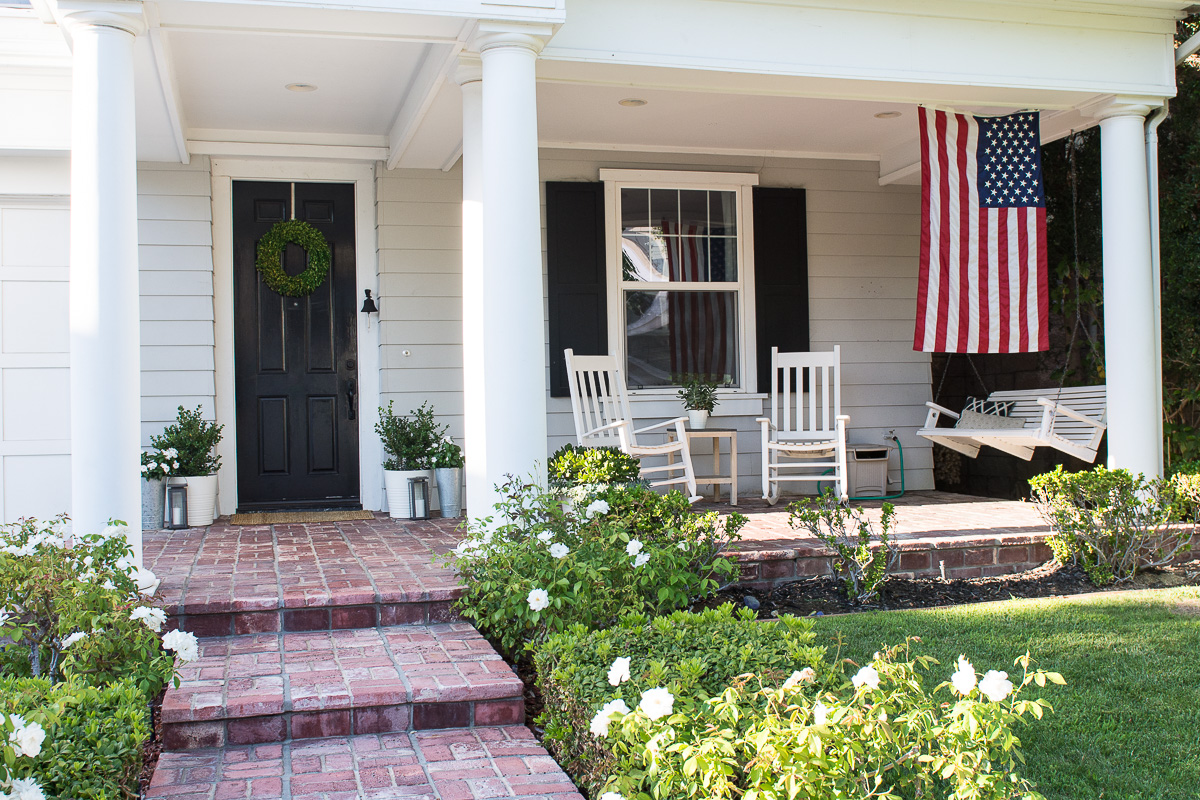 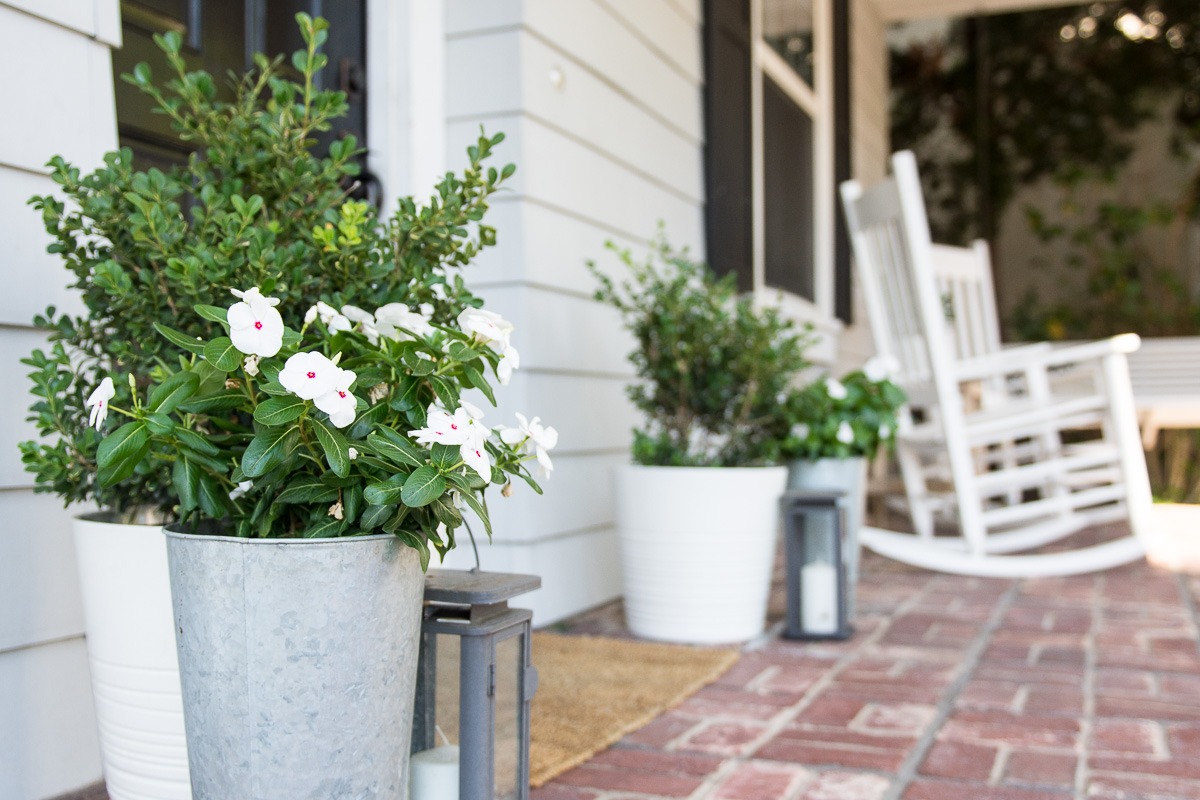 Once we were settled about the decision and everything went smoothly with the bank and inspection, we entered the next hard phase; the actual move. When we moved to California two and a half years earlier, Troy’s company packed us up, loaded the truck, unloaded the boxes and built all our furniture. We were spoiled and had no idea what we were in for this time around. I kept thinking it would be no big deal; we were only moving a few blocks! But even when you make a local move, you still have to pack and unpack every single item. It was no picnic. 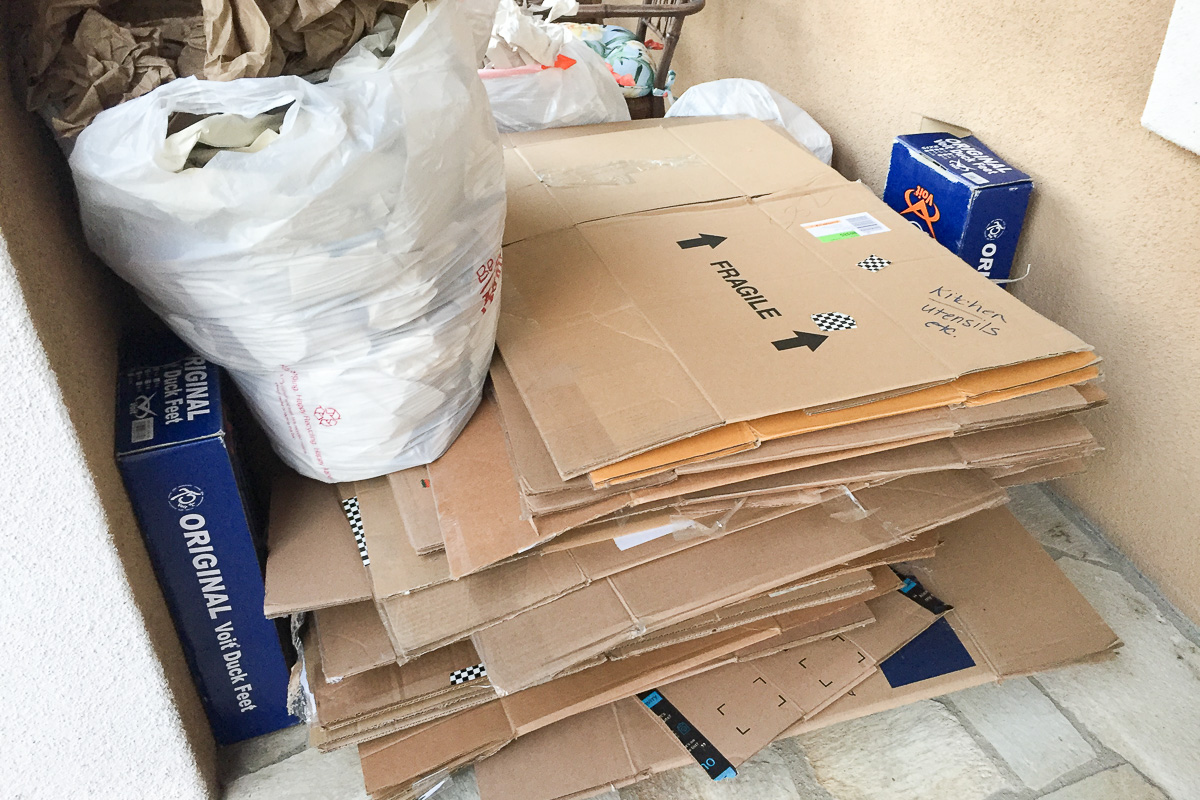 The only documentation I managed to get of the process was the night I scored some used boxes from someone who had recently moved and I loaded the boys up in their pajamas to help me collect them. 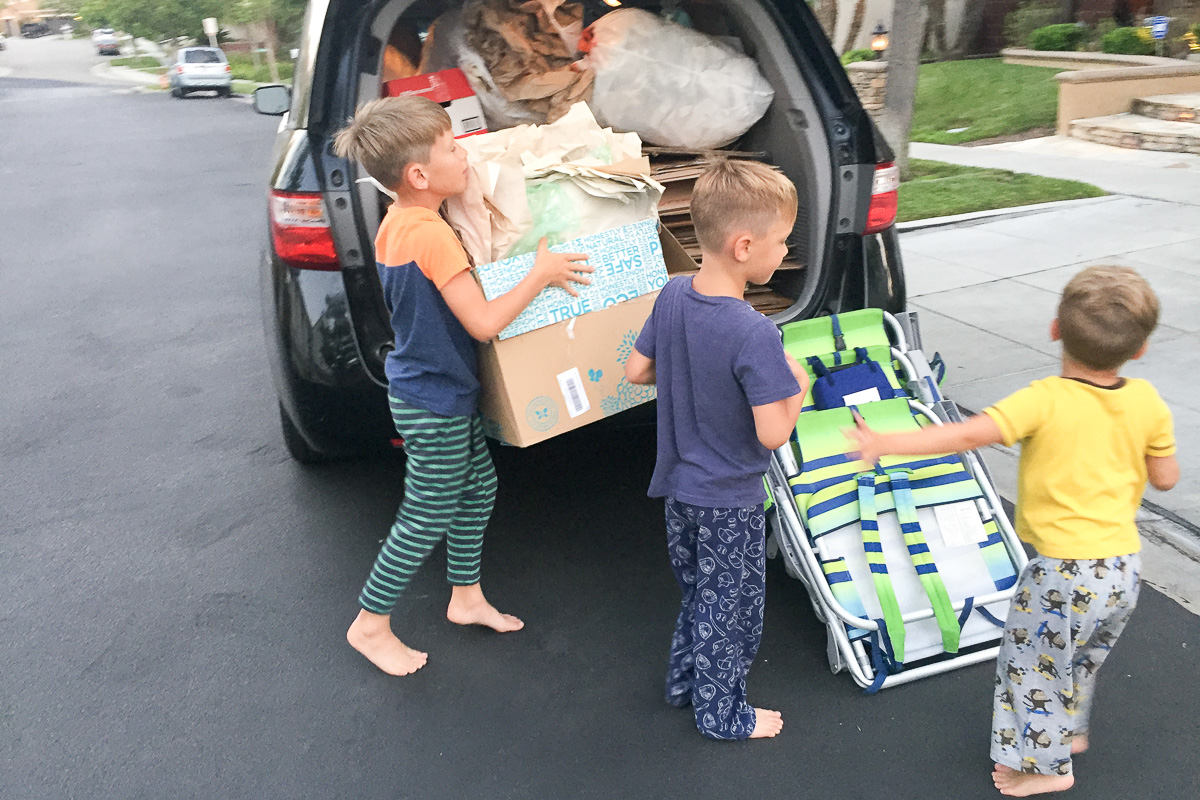 We sold some of our furniture which made the last week in our rental interesting. We ate at a card table with folding chairs and I came home late one night to find Troy asleep on a bean bag; our only piece of furniture left. 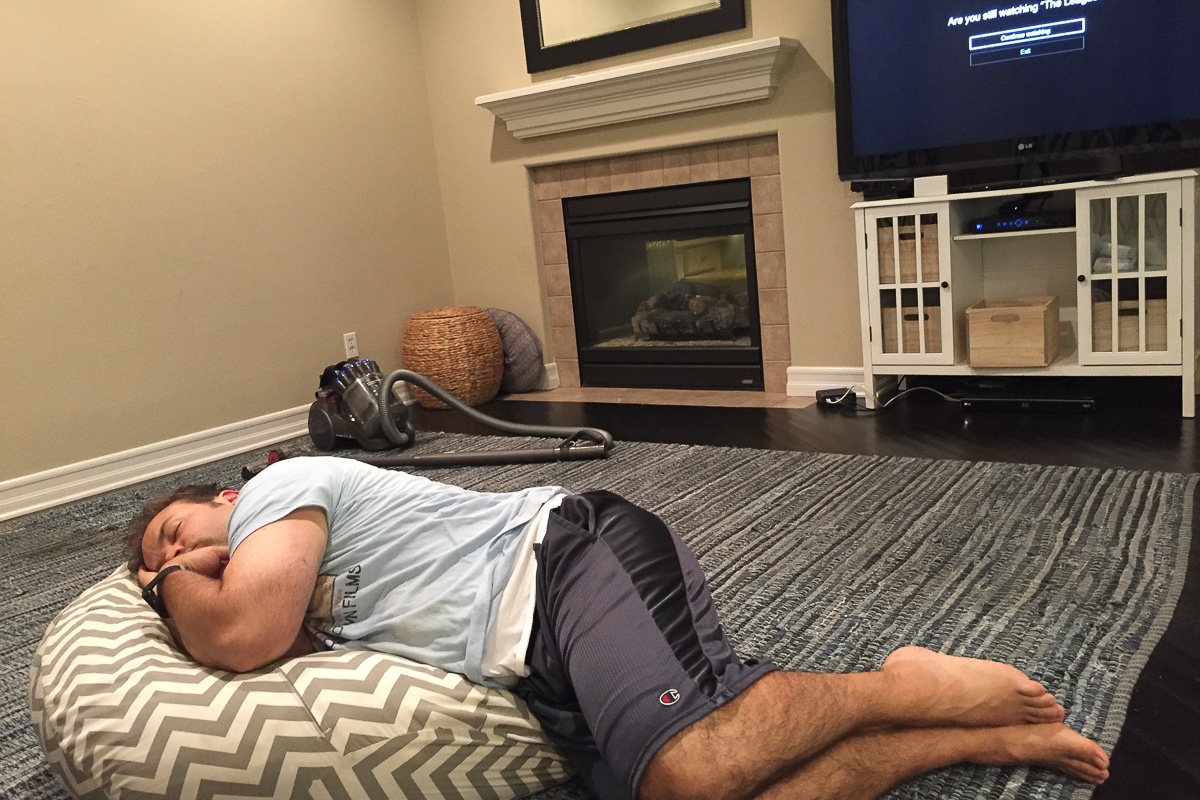 It was bittersweet to close the chapter on the two plus years at our rental. We made the best of friends with the girls on our street, and even though we weren’t moving far, we knew it just wouldn’t be the same to not see them every time we pulled in and have spontaneous popsicle, dance, s’more and swim parties. 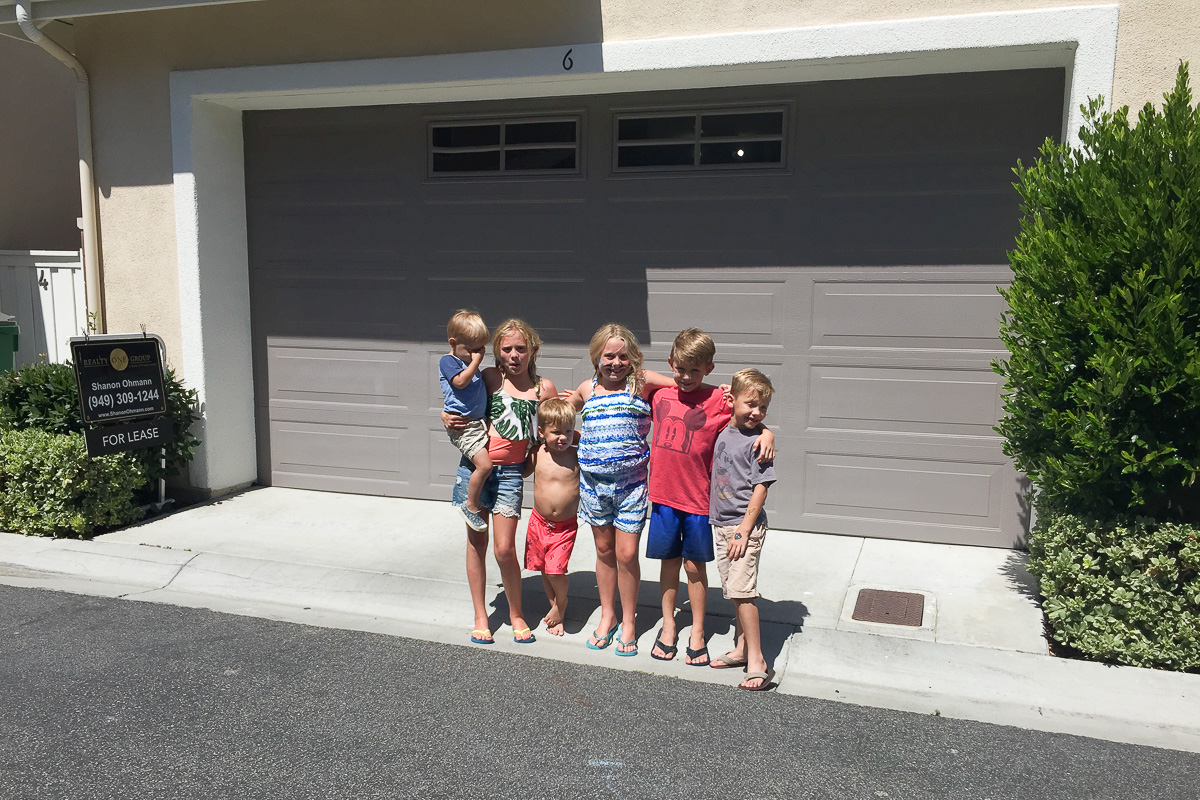 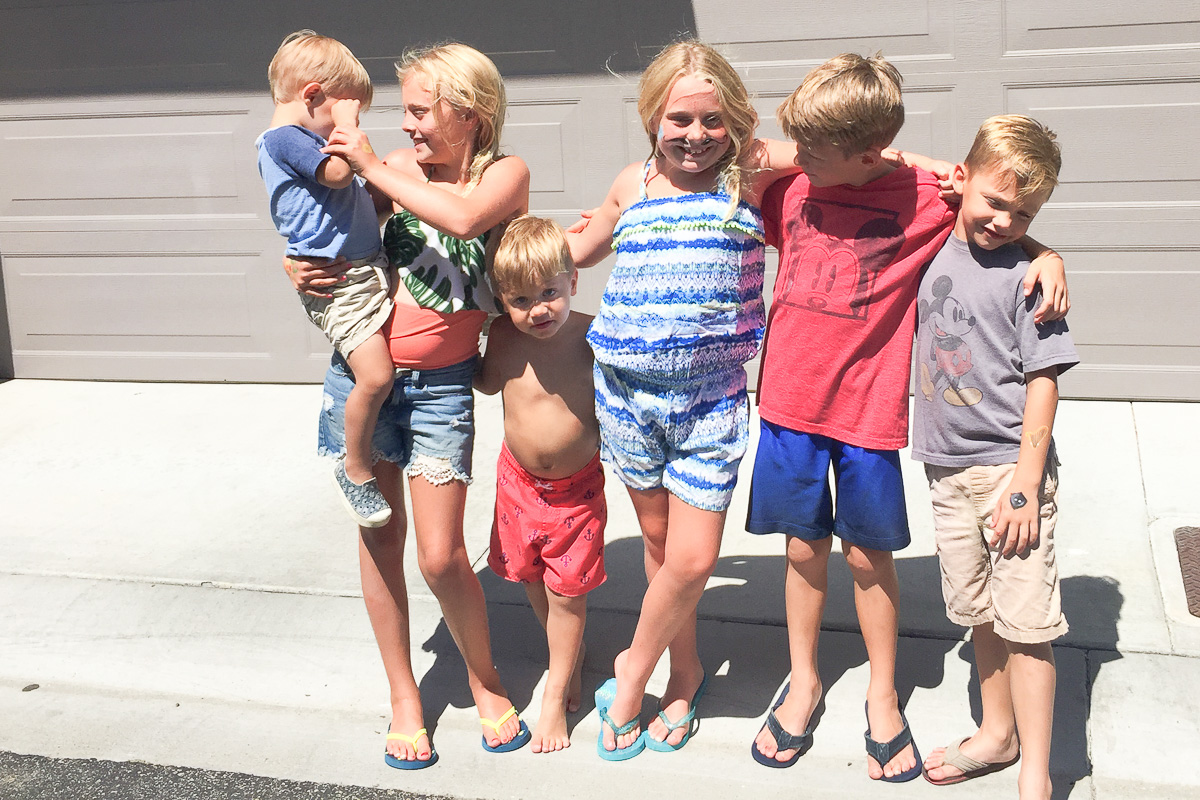 On the night we closed on our house, we brought the boys over to pick out their rooms. It took them no time at all to break in the front porch swing. 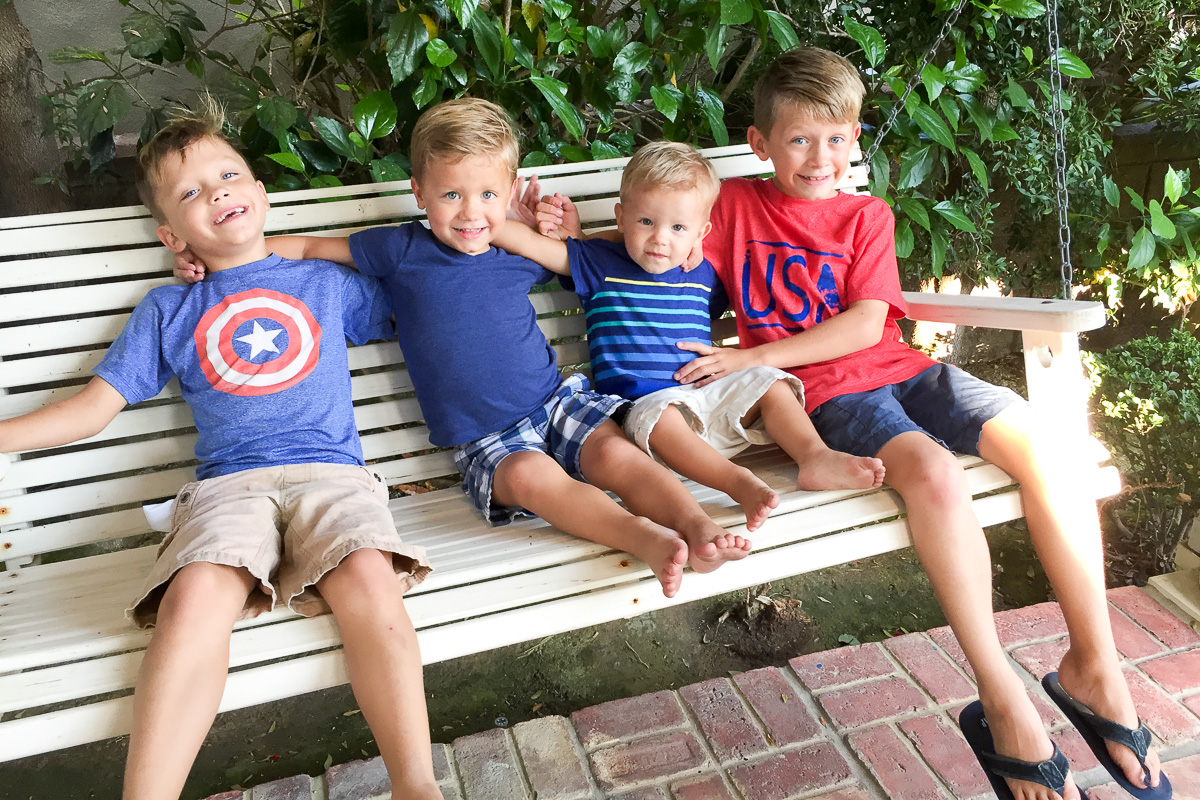 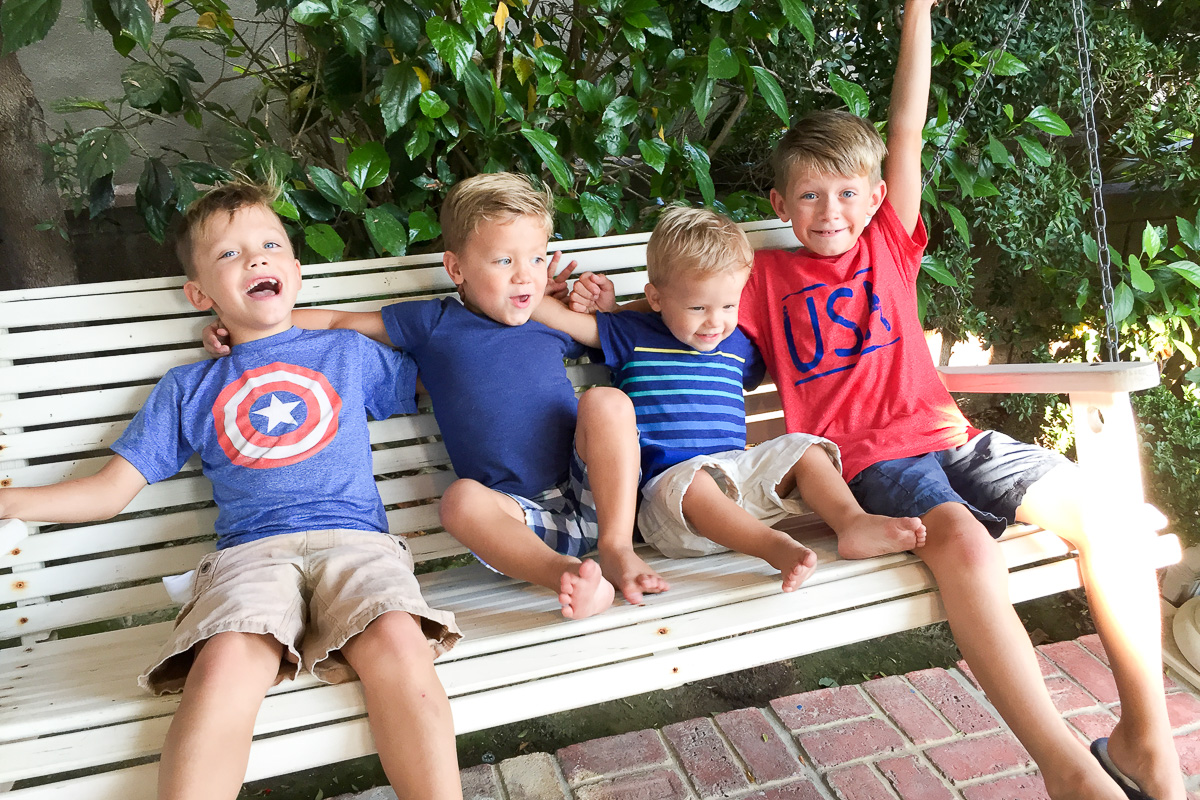 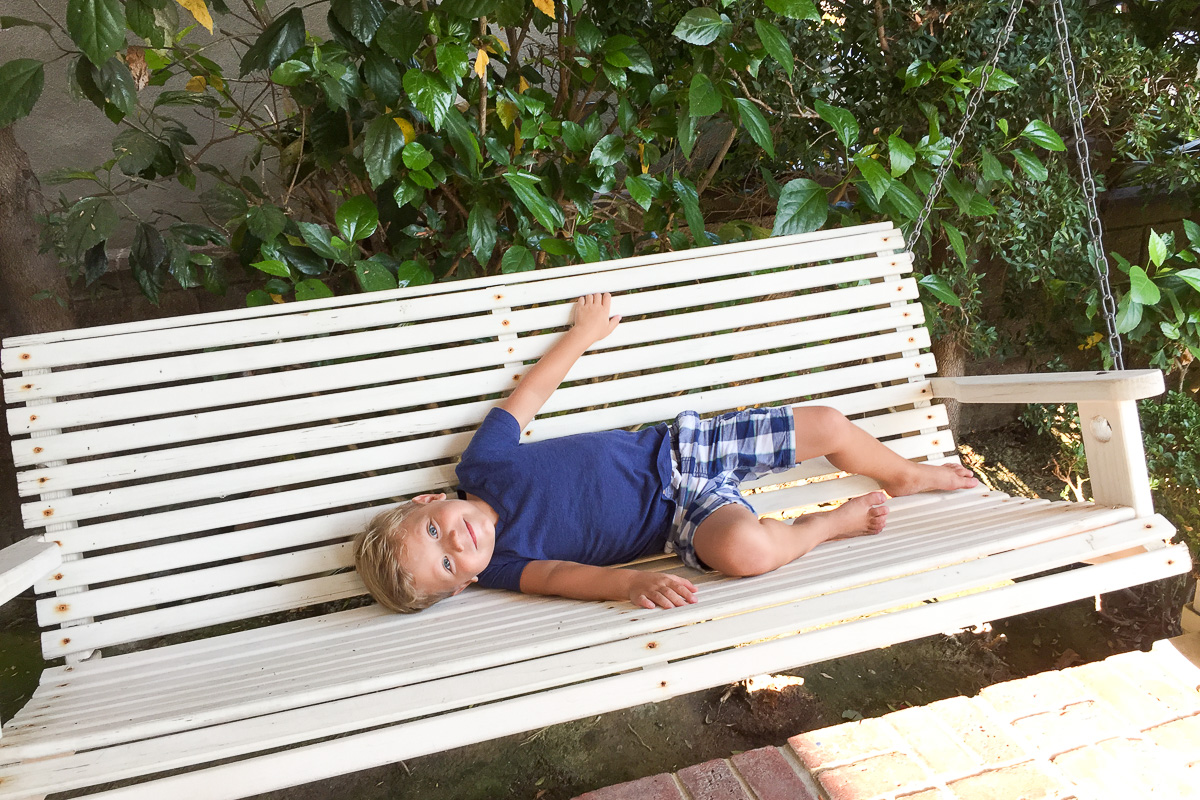 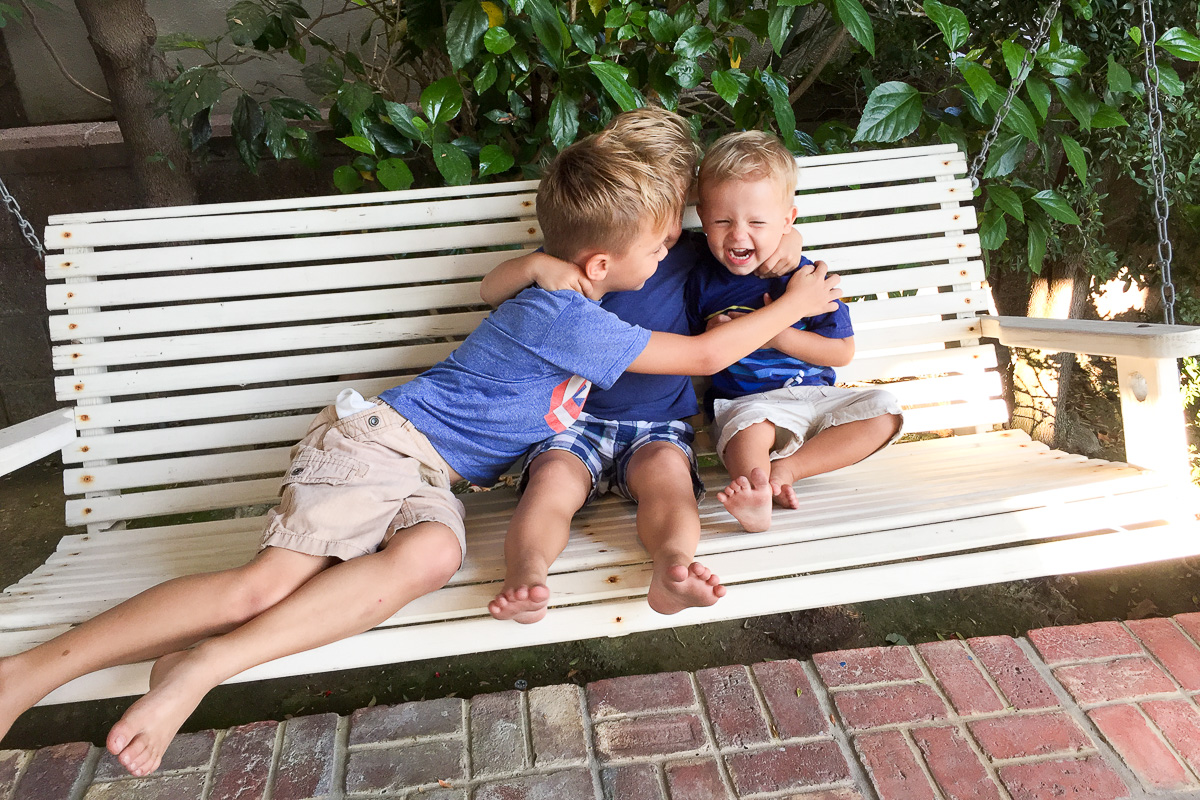 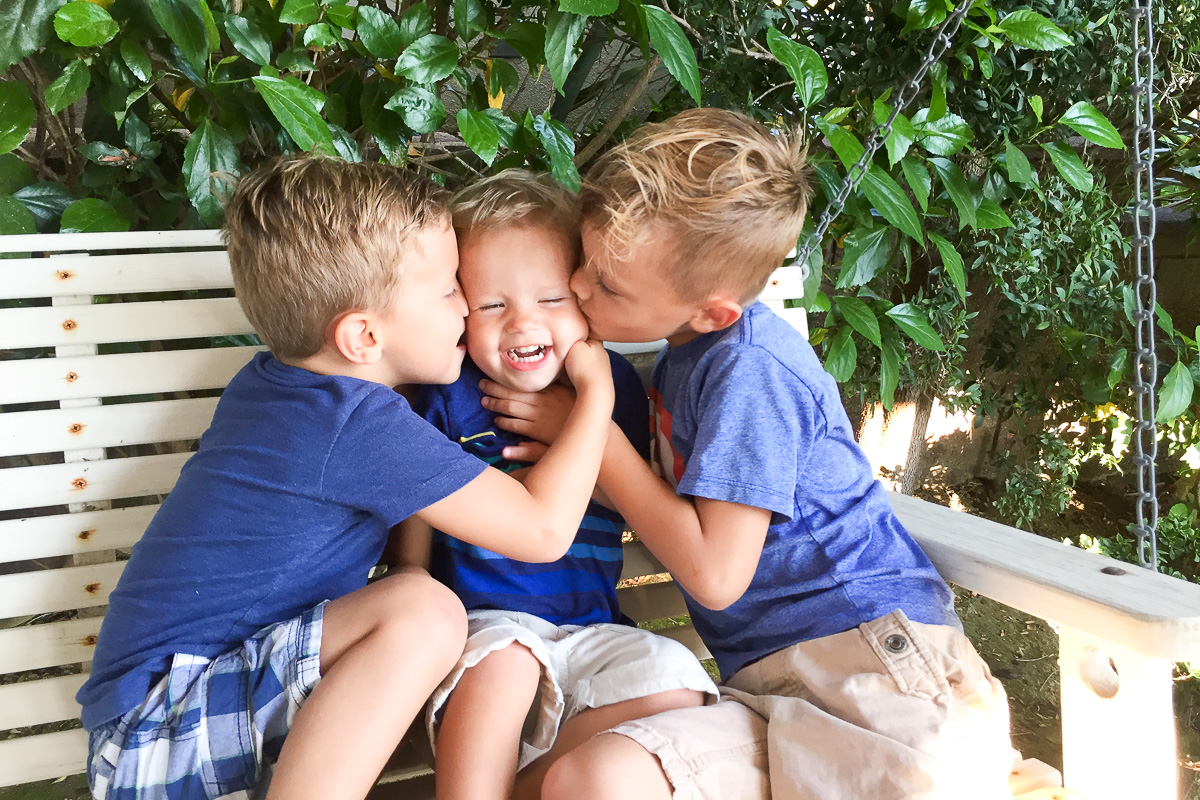 We had about a week and a half window from when we closed to when our lease ended on our rental. We repainted the entire house during that time. Then, the last weekend of July, we made the move. It was a total blur. We hired some movers for the heavy furniture but we did the rest ourselves with some help from friends and parents. We were welcomed to a gaping hole over the fireplace and a broken flue vent. Oh, and no air conditioning for a couple of weeks. Ah, the joys of homeownership. 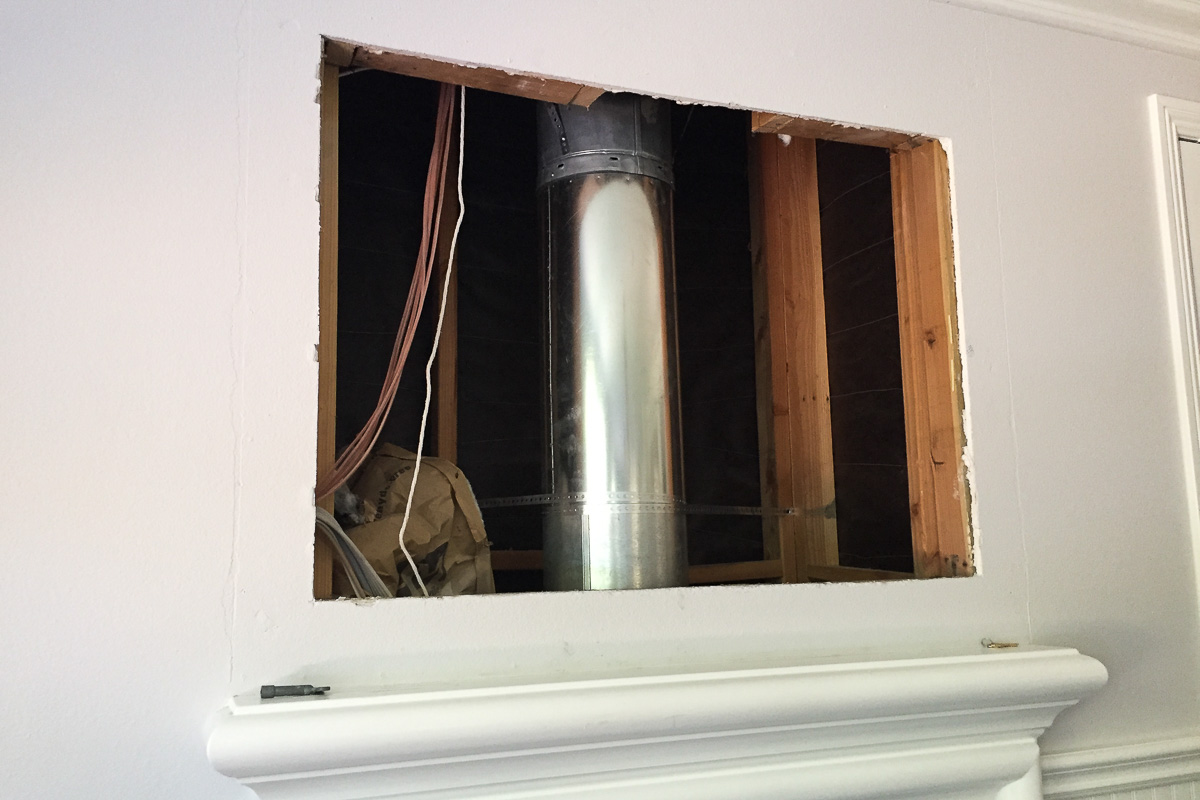 We lived in total chaos for the next week and our office was covered in boxes for much longer than I’d like to admit. 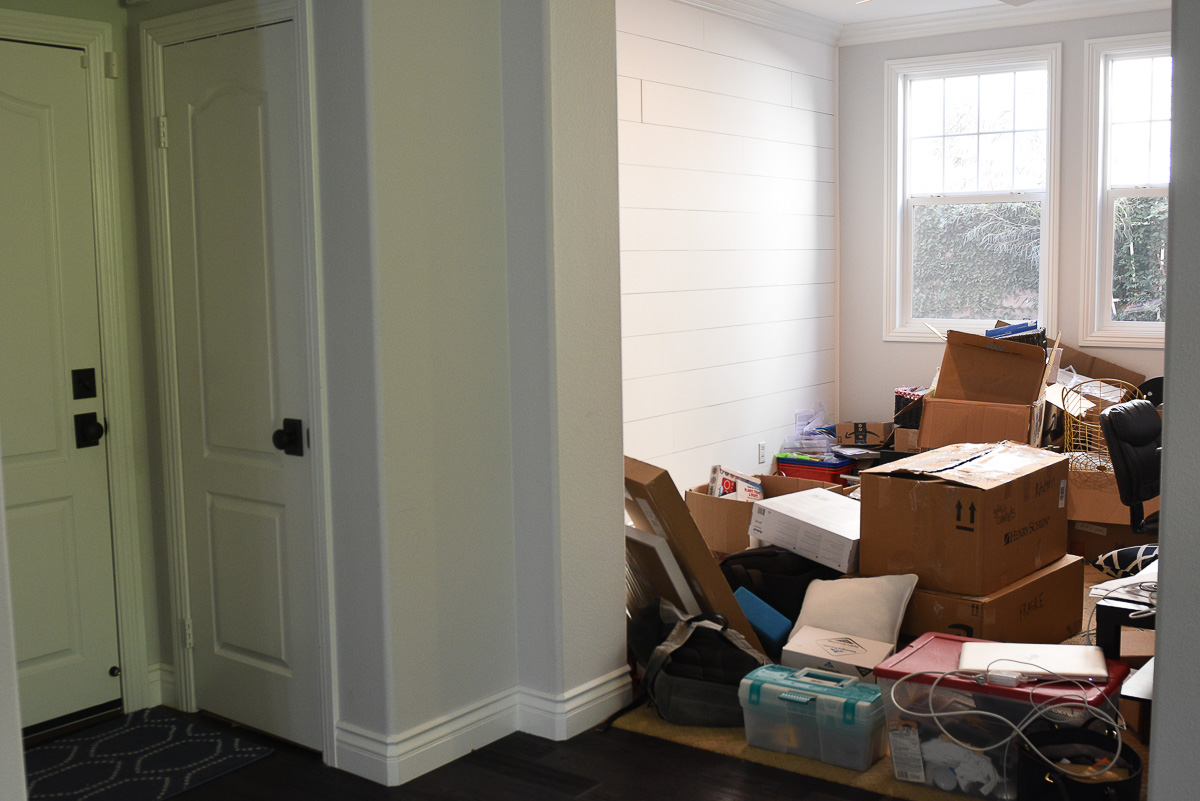 Thankfully, a week after the move we headed to Michigan. It was perfect timing to be able to make the most of our few remaining weeks of summer and deal with the aftermath of the move later. After months of highs and lows, we did it. Ready or not, we bought into the crazy housing market that is Southern California.