We were on a major America’s Got Talent kick this year. We drove up to LA to see a grand total of FIVE recordings. It was so easy to snag tickets and we got so wrapped up in the season that it got kind of addicting!

We kicked off the season in March with auditions at the Pasadena Civic Auditorium. Only Blake and Nash met the audience age requirements, so we left the littles home. 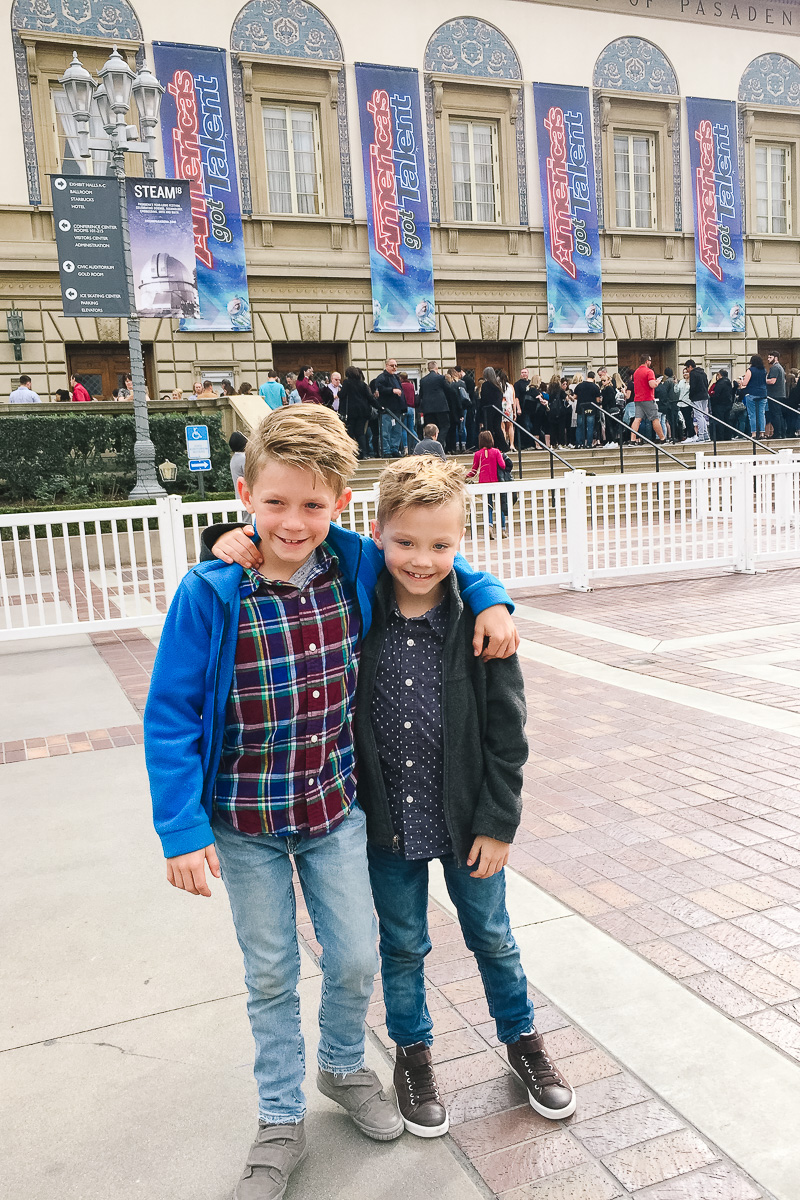 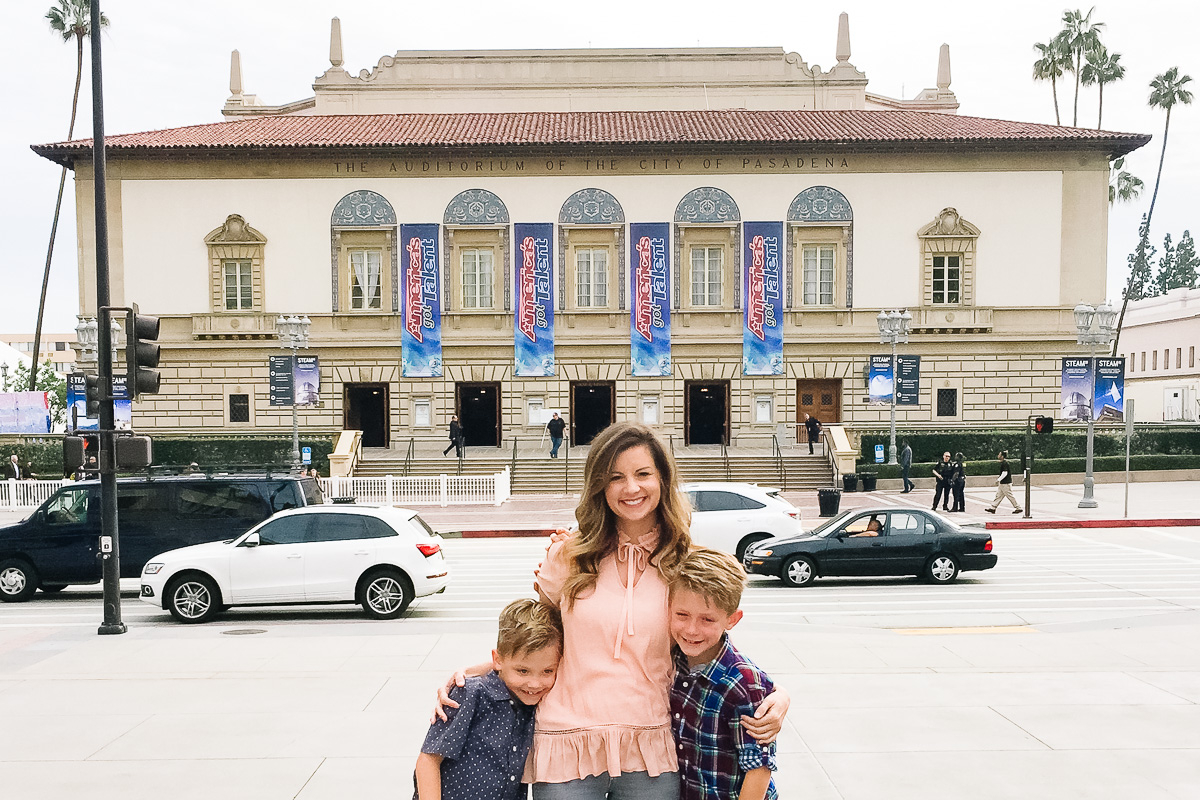 We drove up with our cute friends to be part of the studio audience. 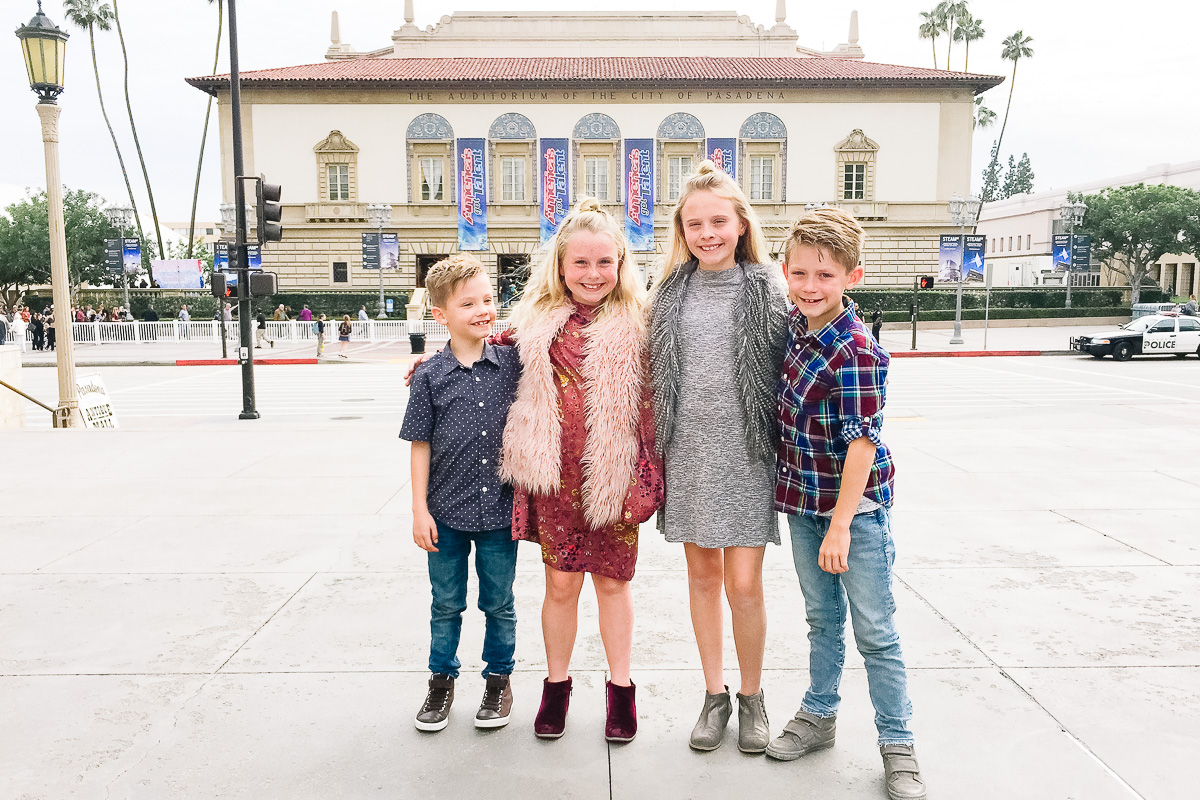 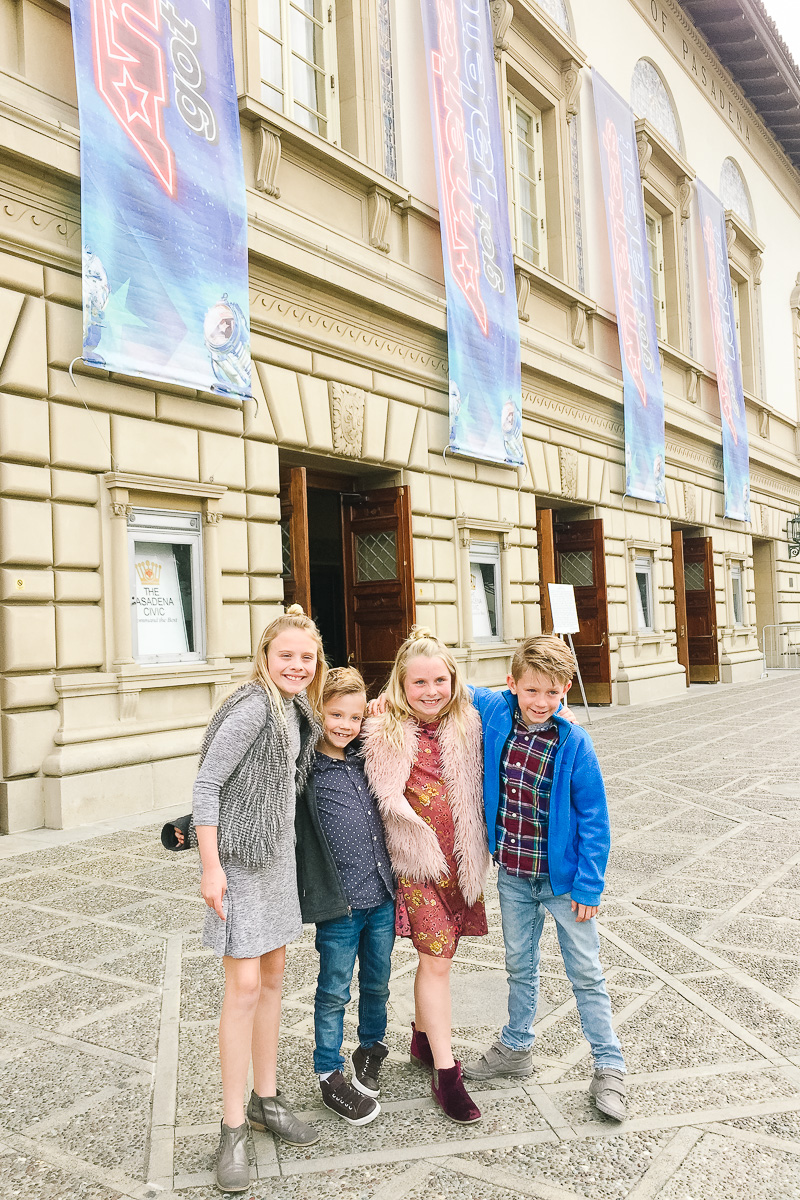 It’s such a rush to be inside the theater with the lights, celebrities and cameras. 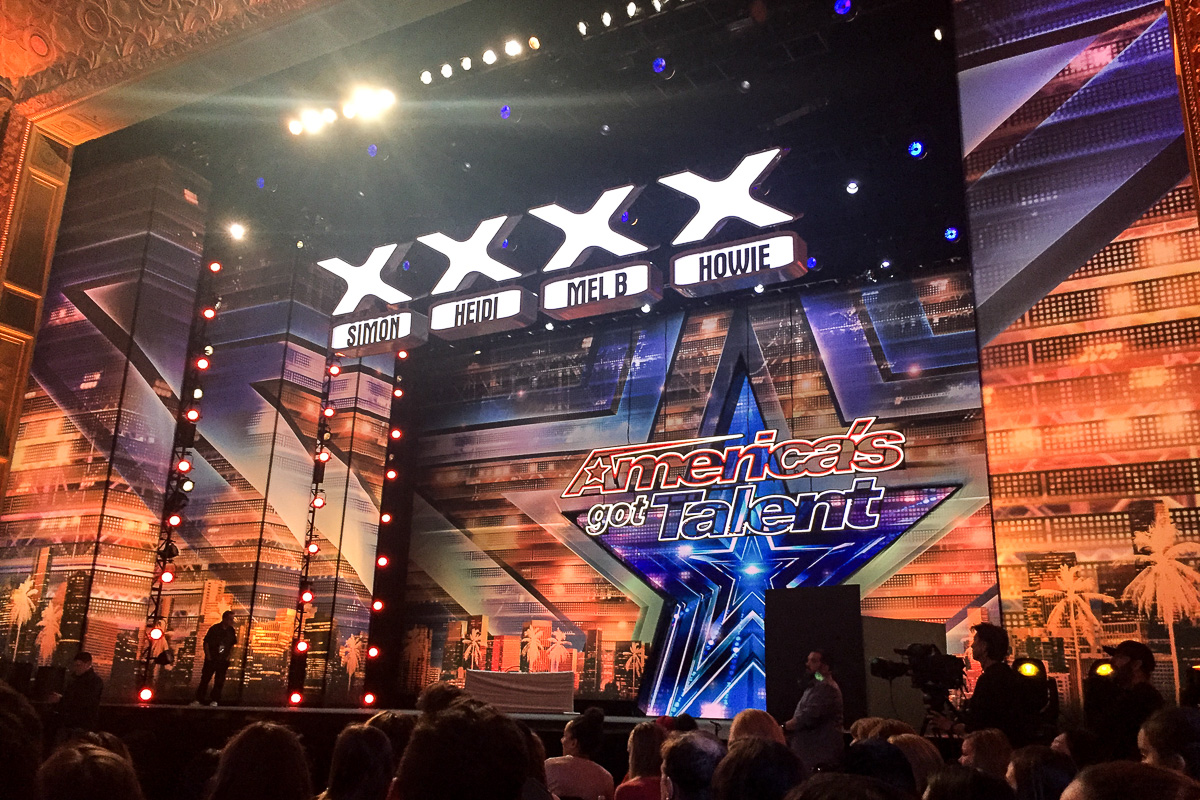 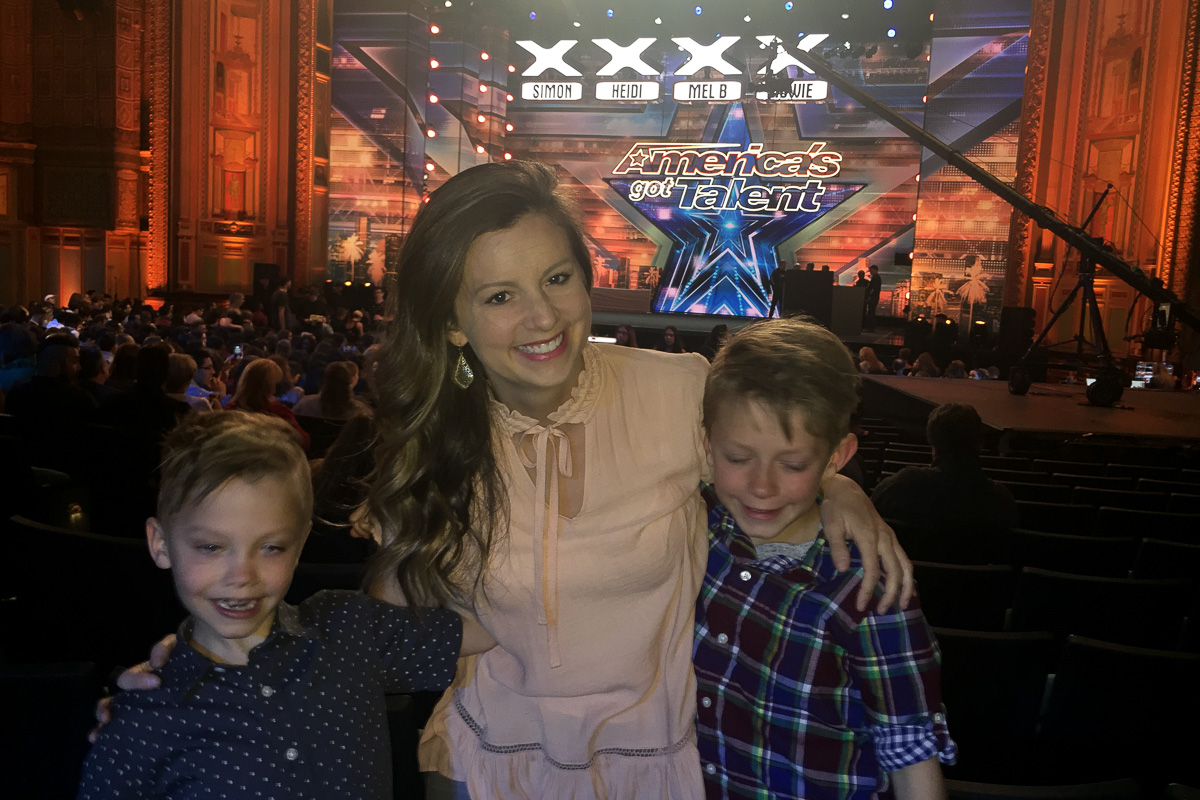 In April, we headed to Universal Studios Hollywood for an episode of Judge Cuts. It ended up being quite the fiasco. They overbooked tickets and ran out of space for the crowd that showed up during the earlier recording, but promised us great seats if we stayed around for the later recording. It meant a super late night for the boys, but we had already driven all that way, so we decided to go for it. We had a few hours to kill while we waited for our showtime, so we explored the CityWalk outside Universal Studios. 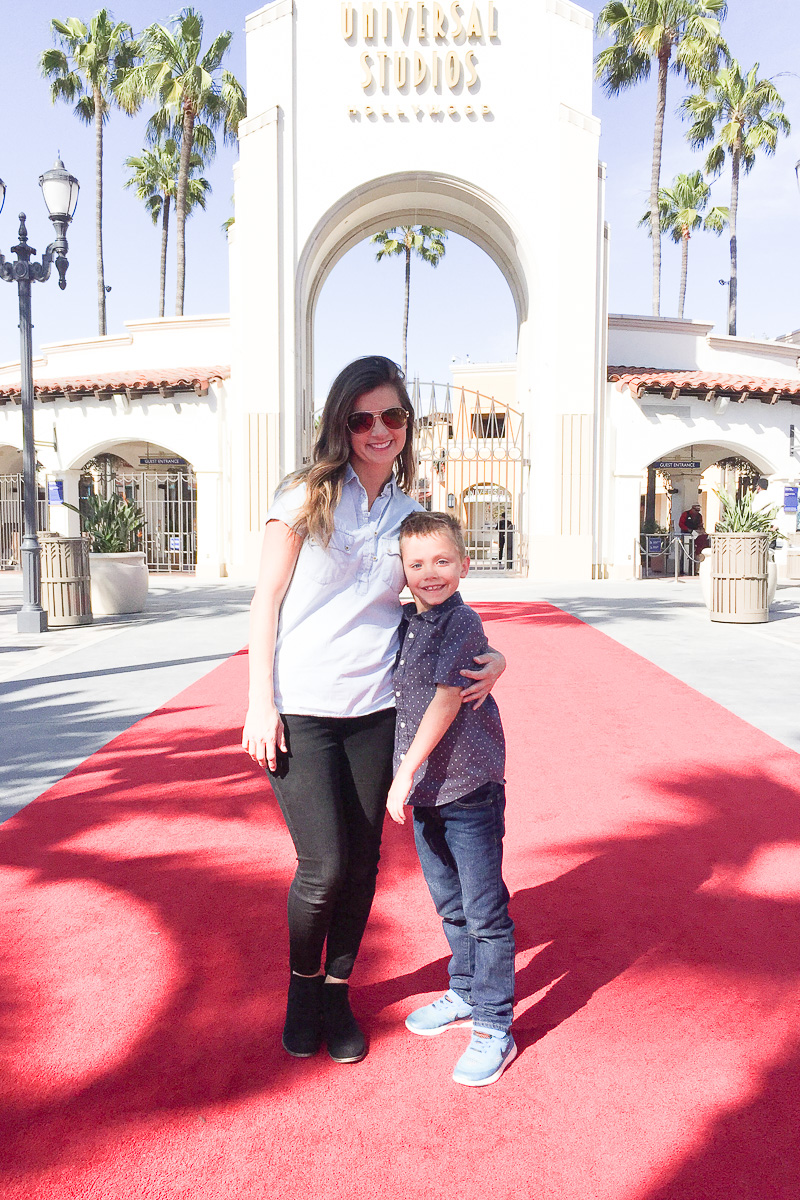 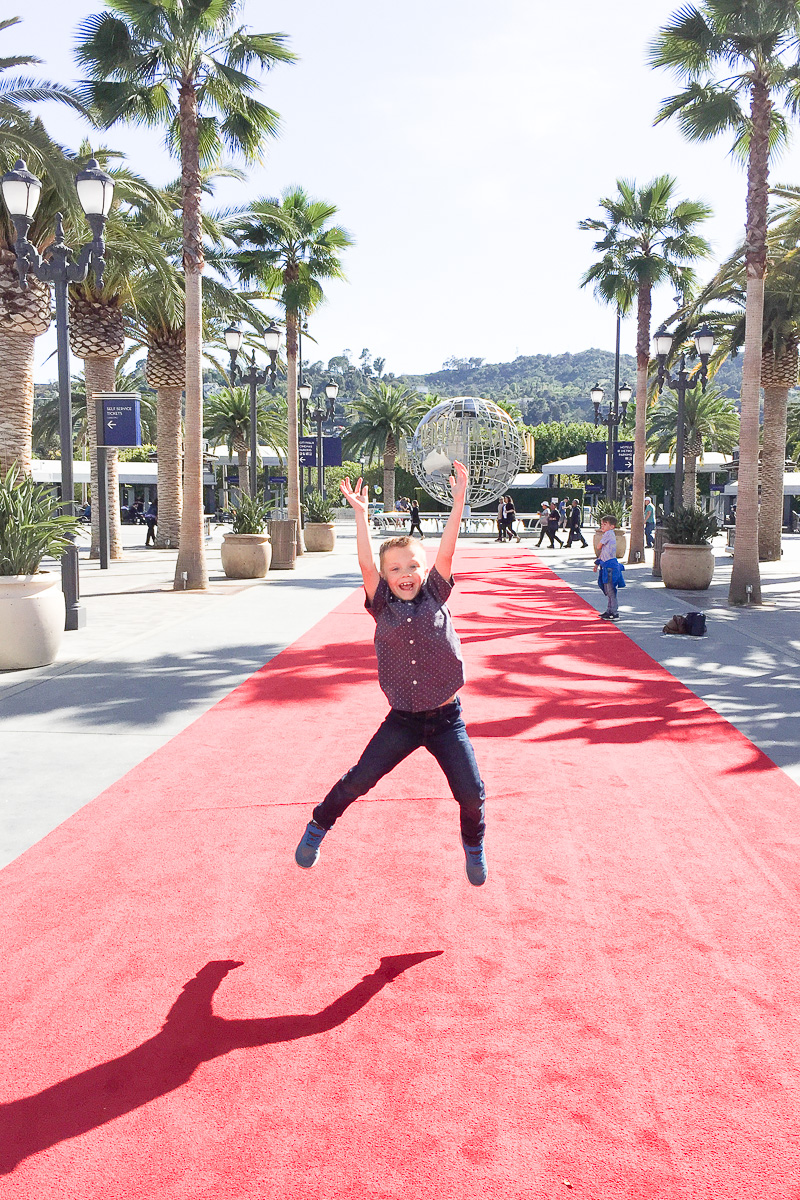 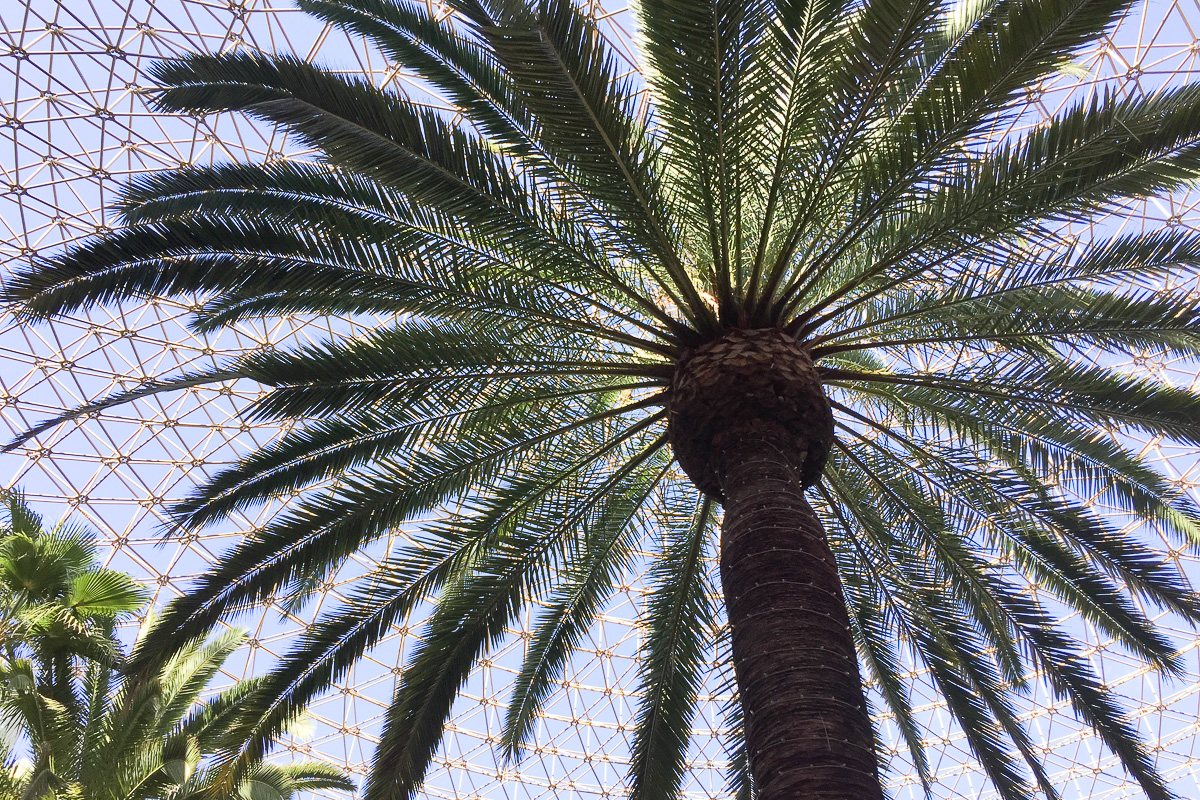 I tried to convince the boys to stay dry, but the illuminated dancing water fountains were just too appealing. 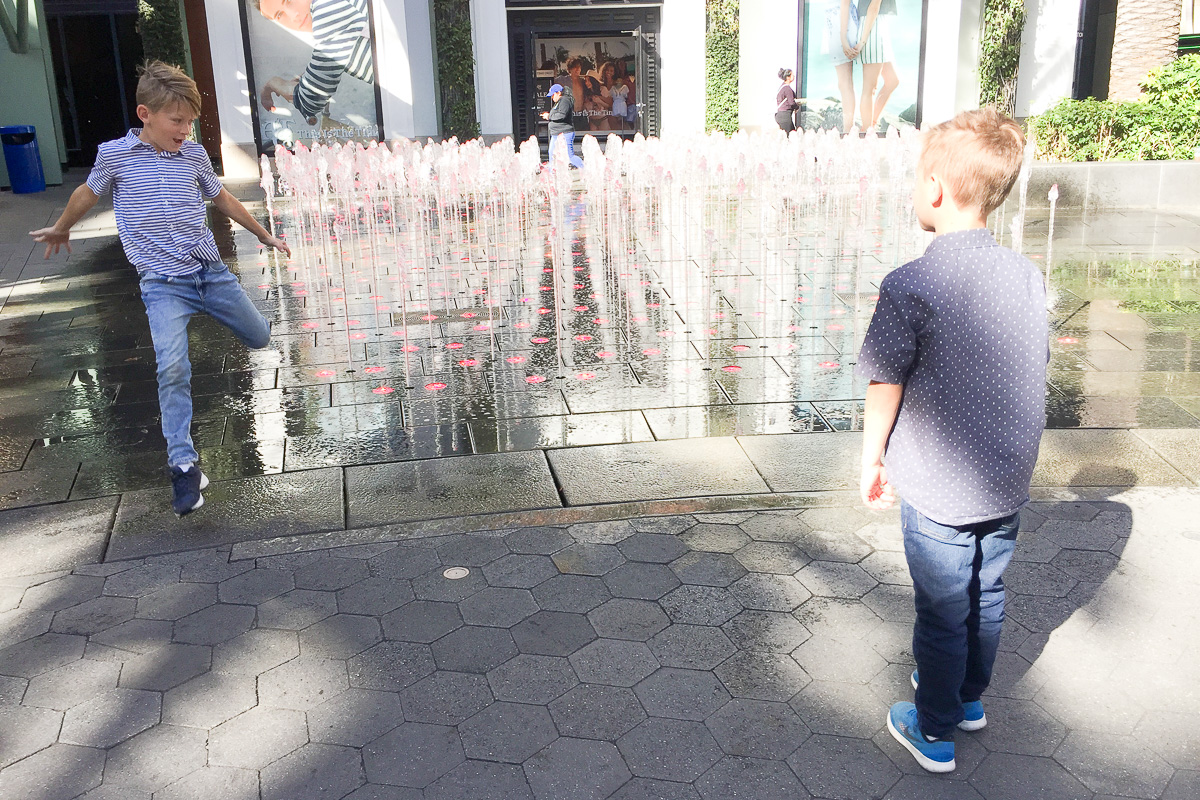 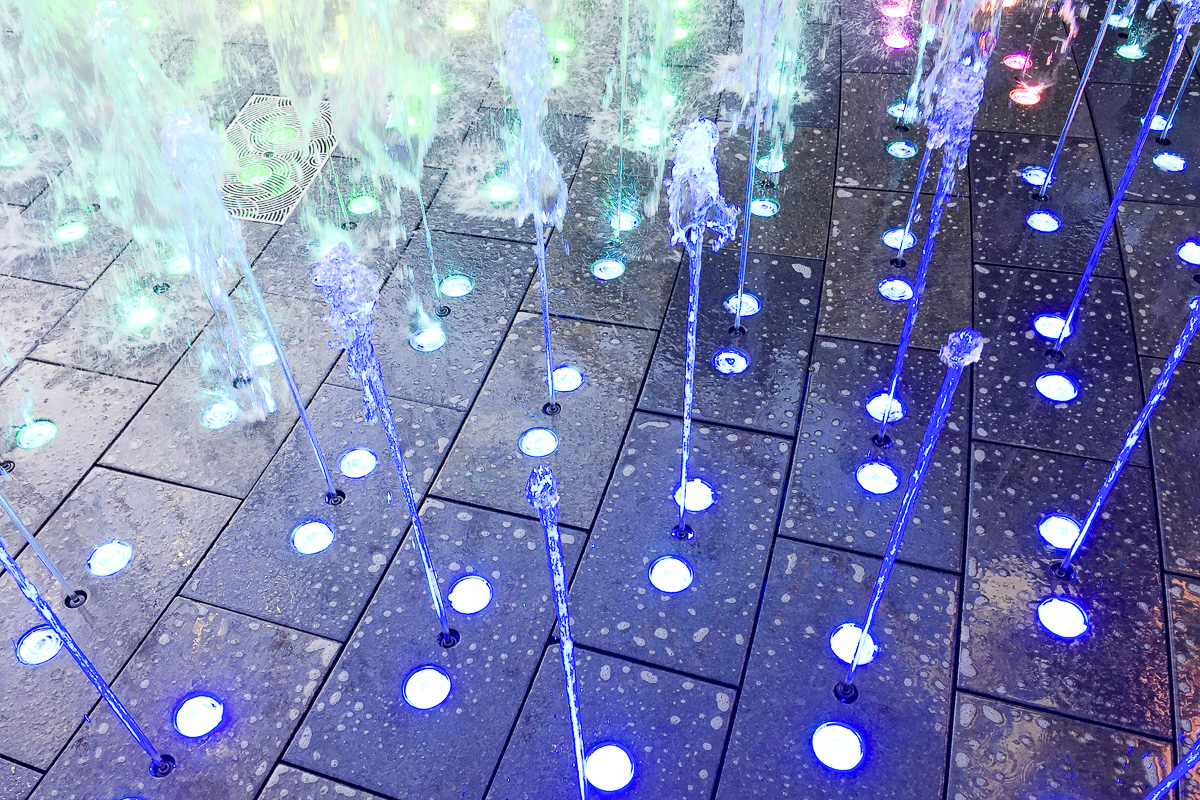 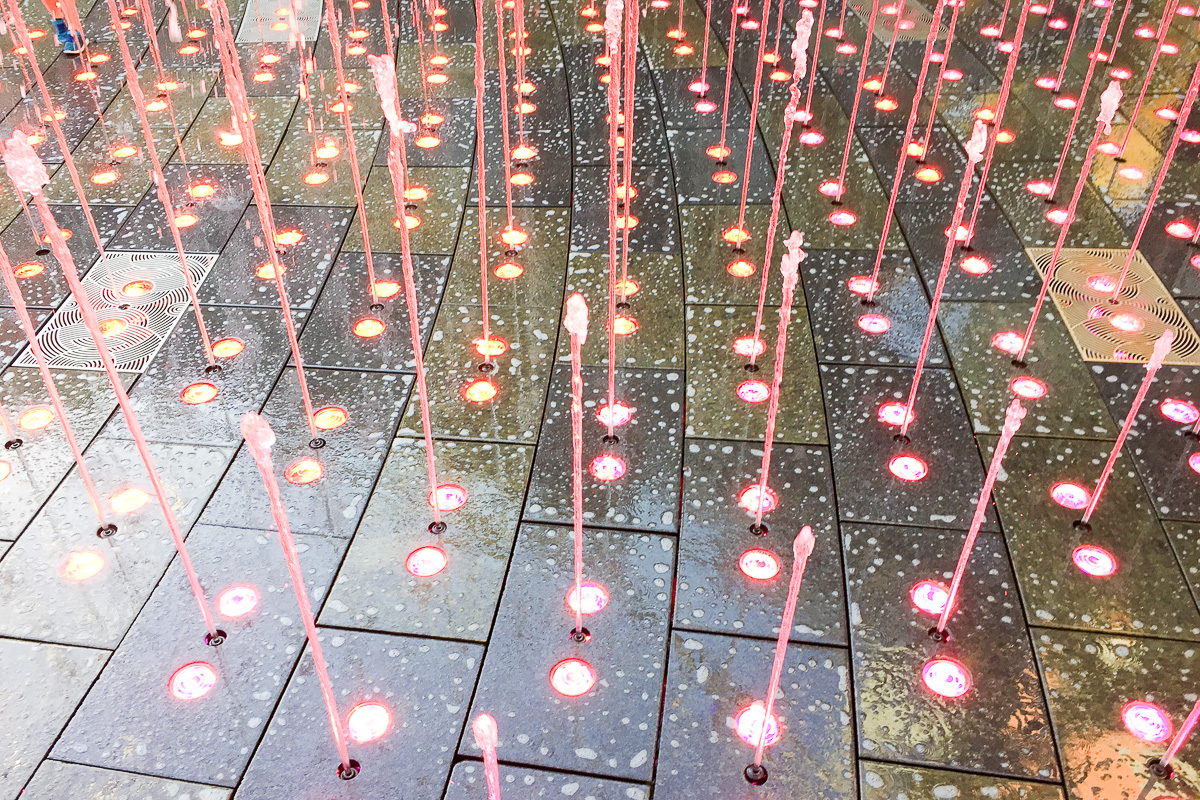 A few hours later we made it into the recording studio. They weren’t kidding about the good seats they promised; we were seated right next to the judges’ chairs. 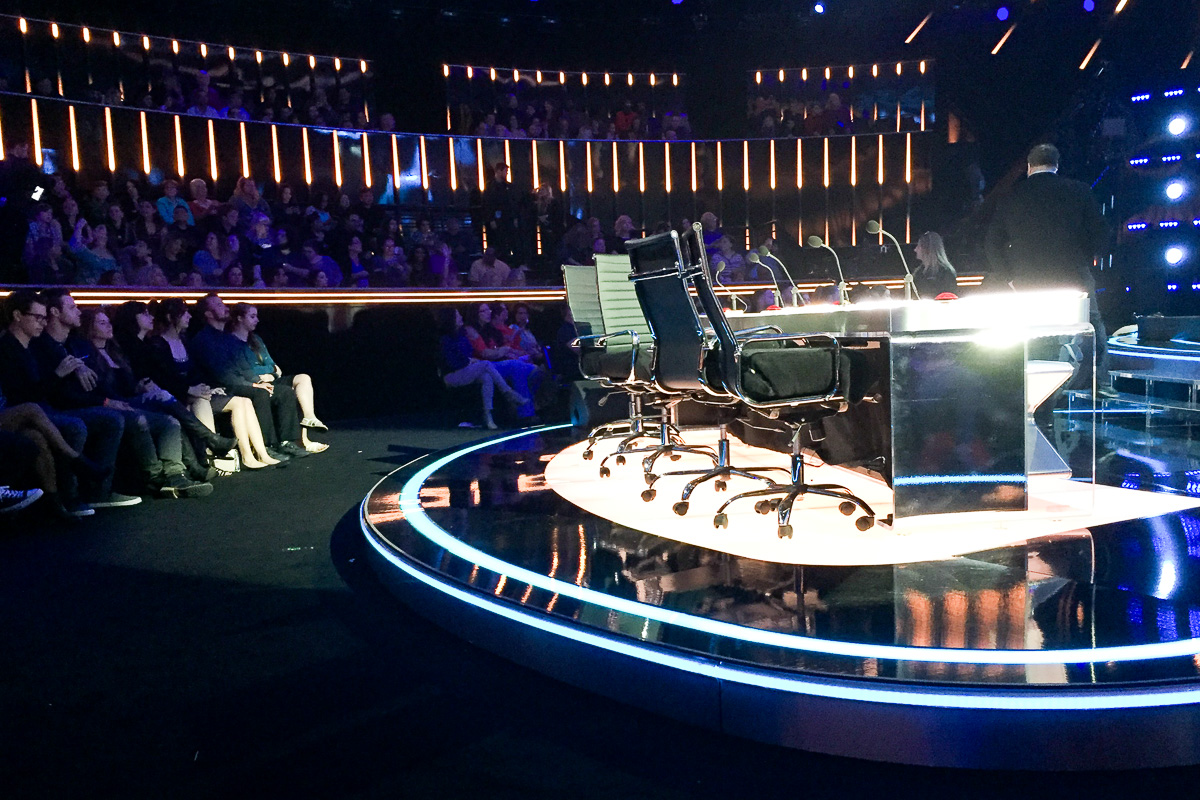 Nash was singled out of the entire audience to practice pushing the golden buzzer during a break between acts. He was equal parts nervous and flattered to be spotlighted.

A few days later, I headed back up to Hollywood once again, but this time with a group of friends. 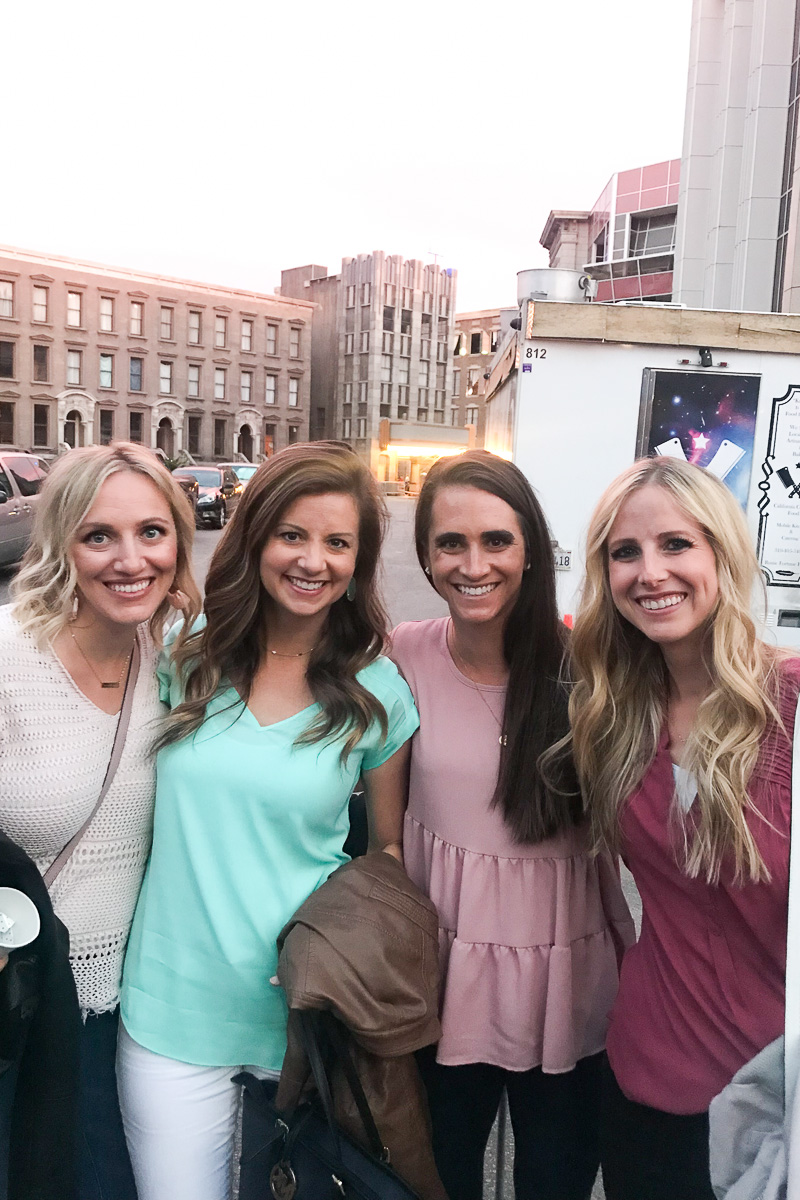 I didn’t think our seats could get much better, but we were placed in the front row, directly behind the judges. 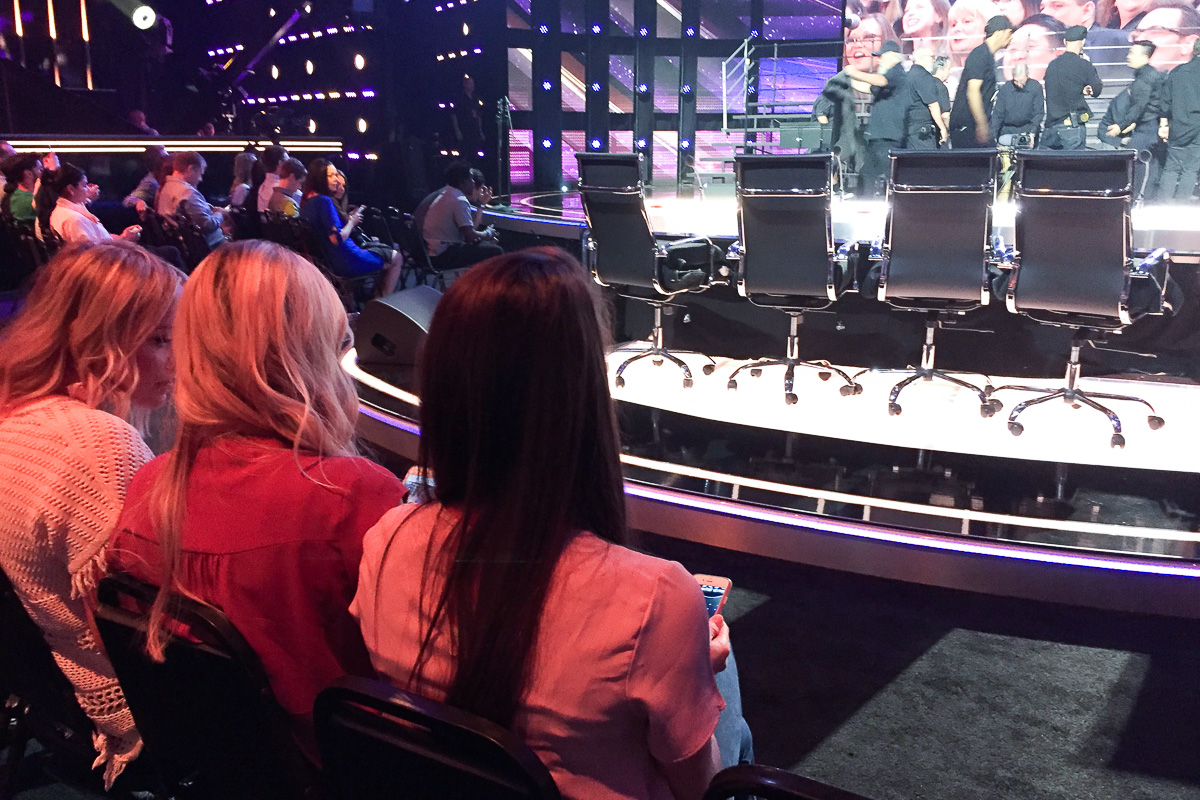 They turned around and interacted with us several times and we were definitely a little starstruck! The actress Olivia Munn joined the panel of judges as a guest judge for the evening. 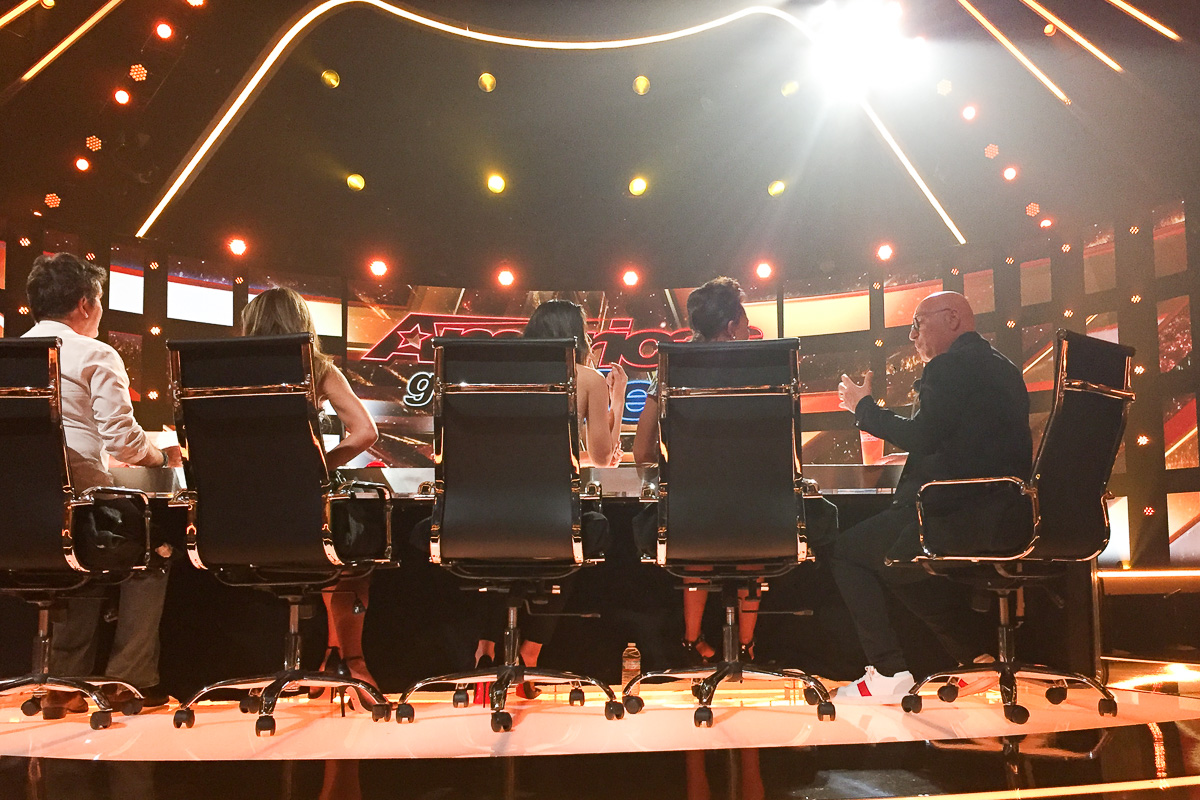 On screen, we were directly behind Howie Mandel and I was able to screenshot a few of our appearances when the episode aired. 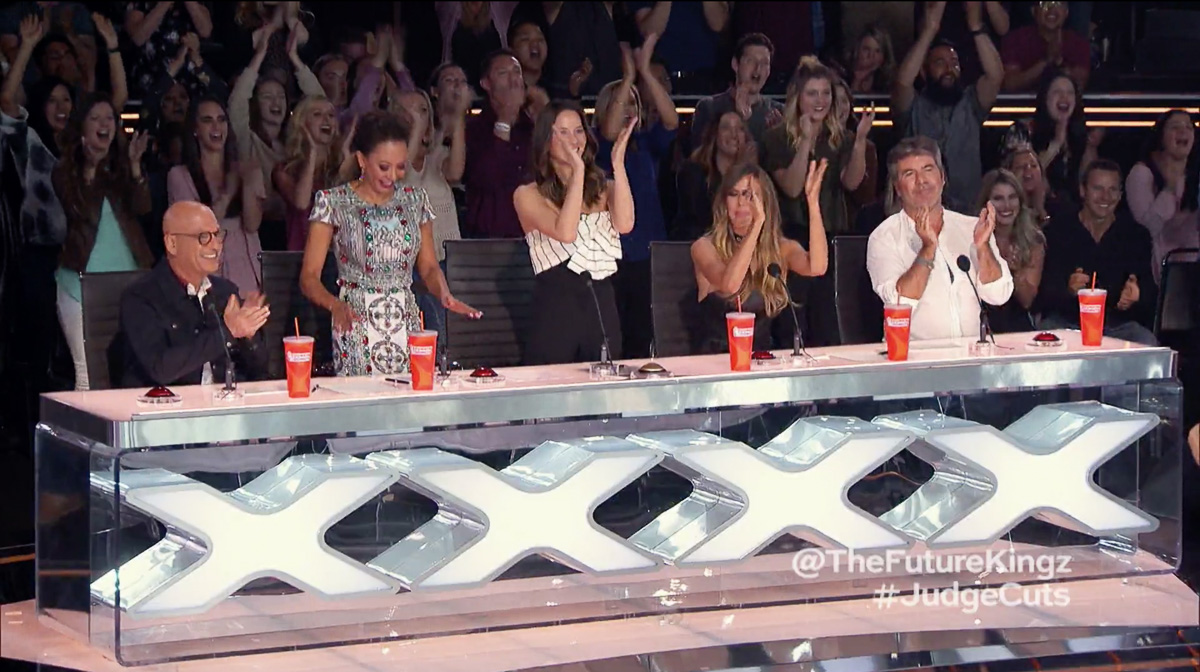 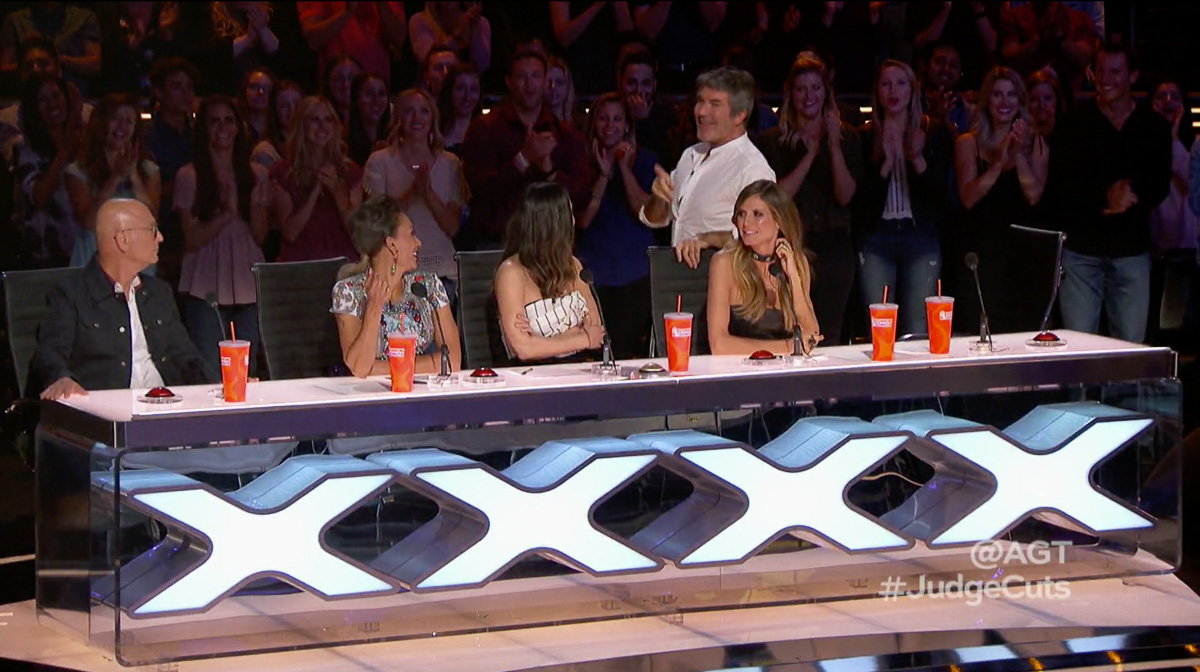 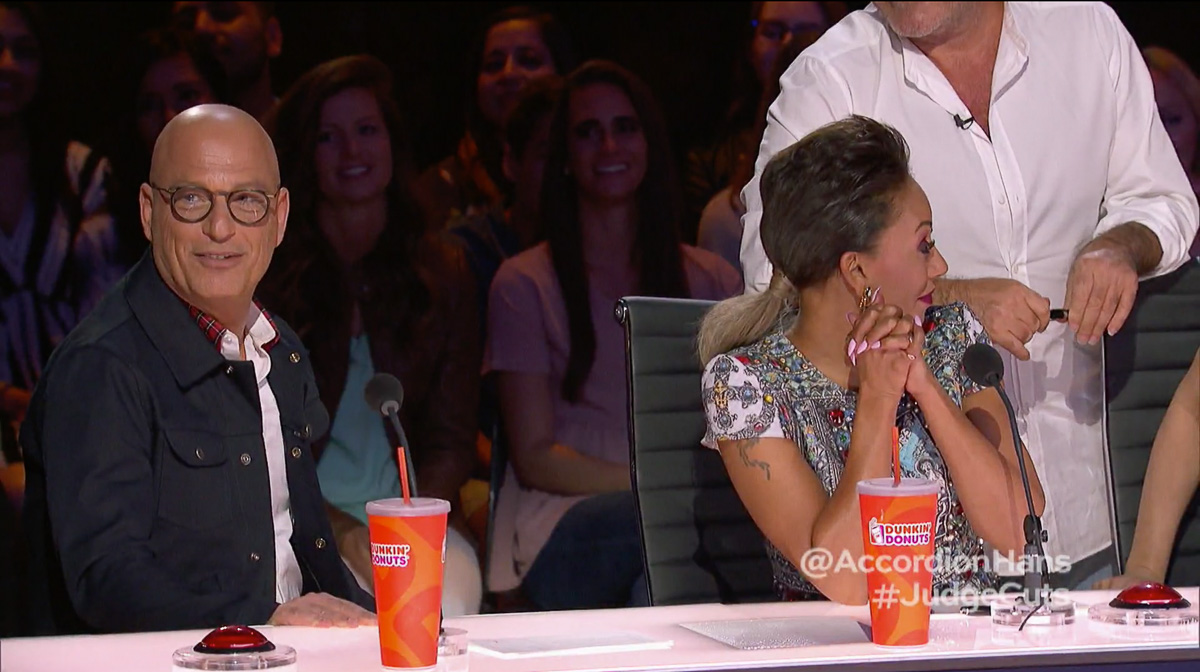 Olivia Munn pressed the golden buzzer for the Angel City Choir and as an audience member, it doesn’t get much much exciting than experiencing the music, lights and confetti that come with a golden buzzer. 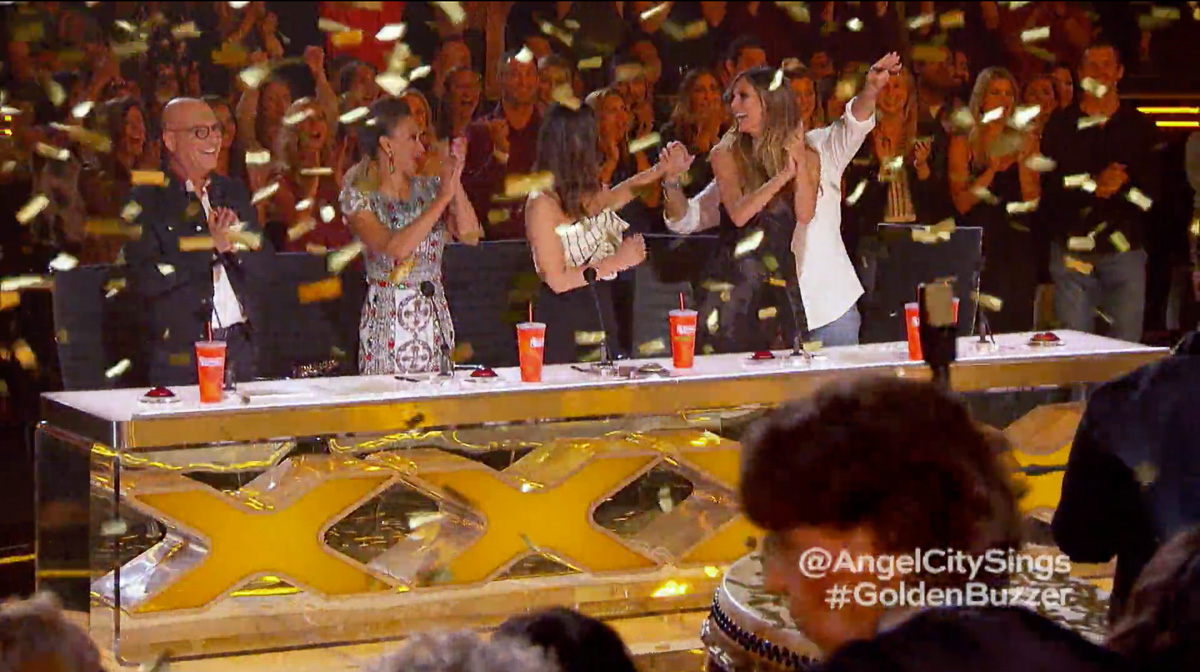 At the beginning of September, we reserved vouchers for a live, semifinals performance in the Dolby Theater. 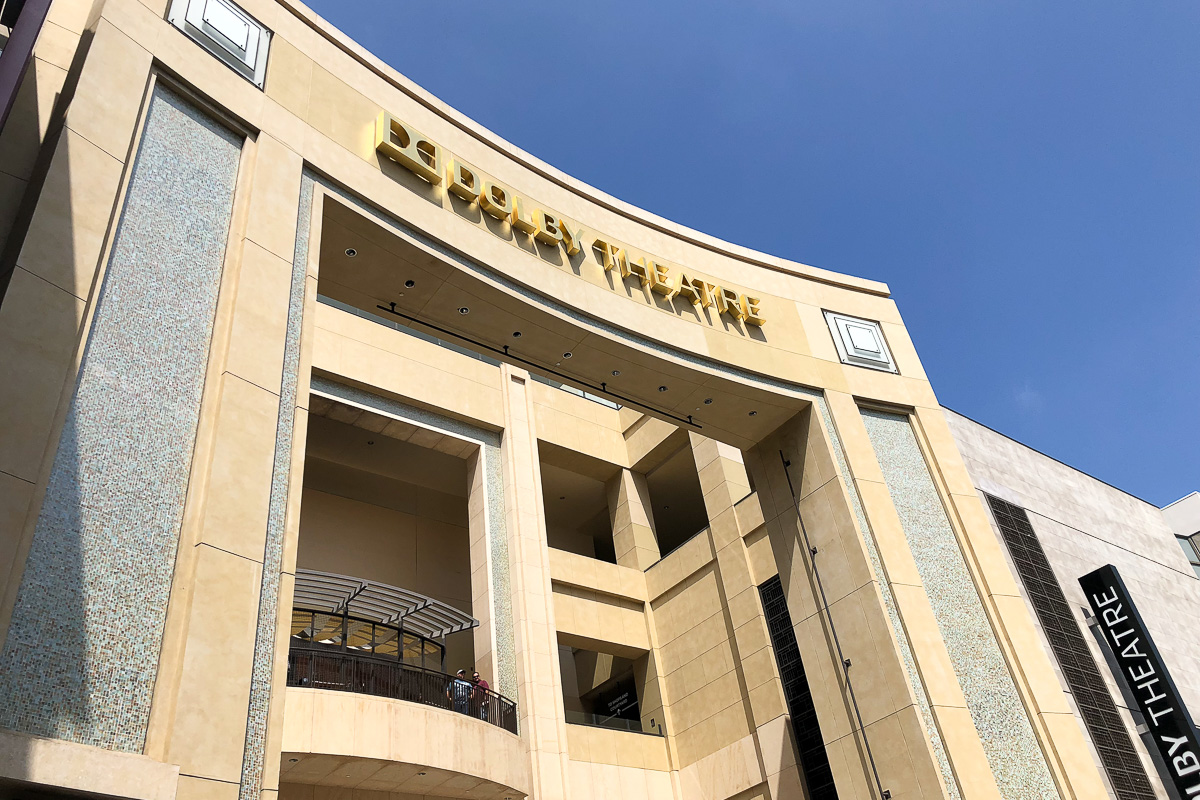 We pulled the boys out of school a little early to get to Hollywood in plenty of time to exchange our vouchers for seat assignments. We were so nervous that we would get there and there wouldn’t be any seats left, so once we secured our tickets, we relaxed and explored Hollywood Boulevard. 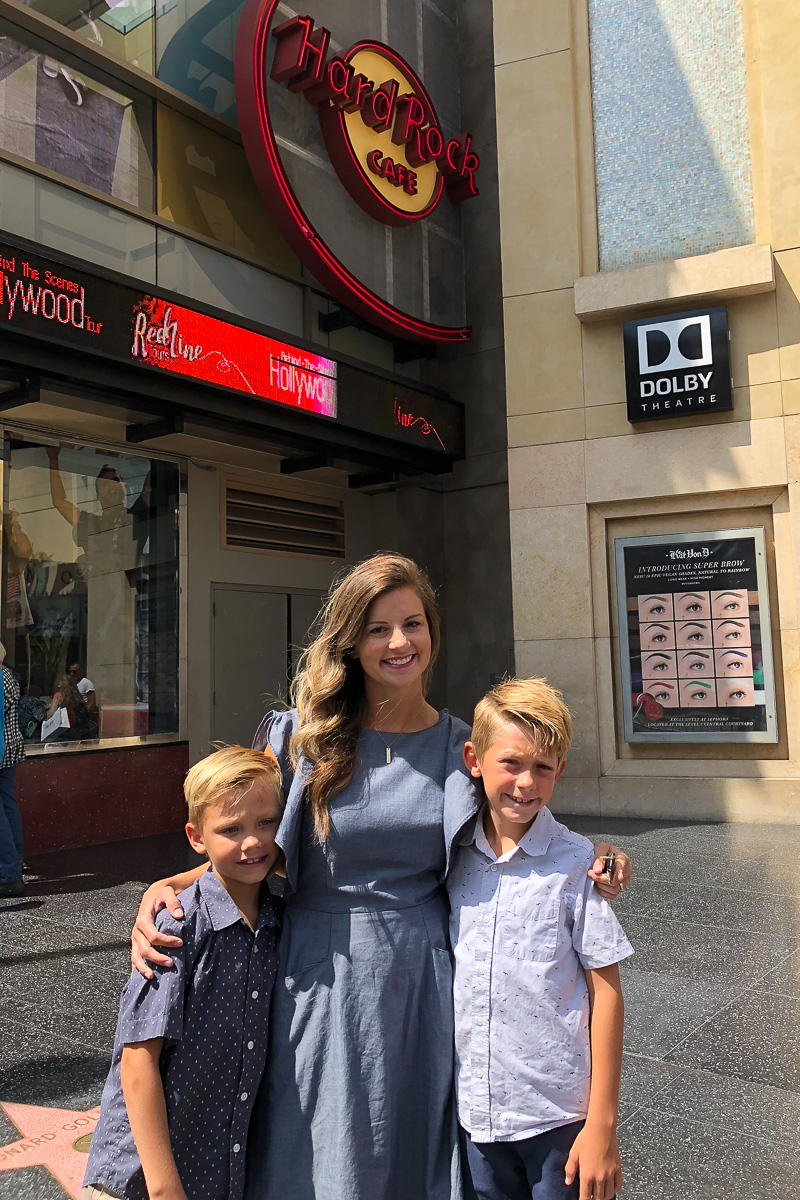 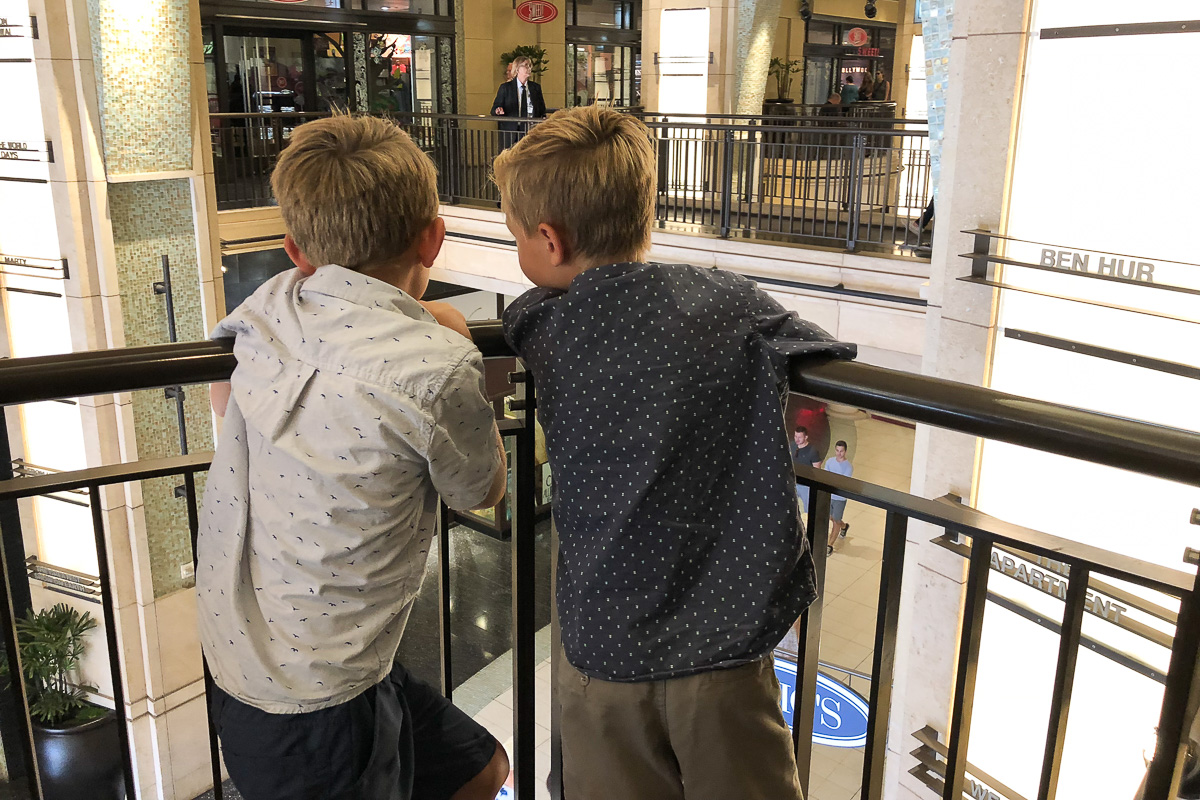 We thought the Auditions and Judge Cuts tapings were exciting, but nothing could compare to the grandeur of being in the Dolby Theater for a live show. We could barely sit still as we took it all in. 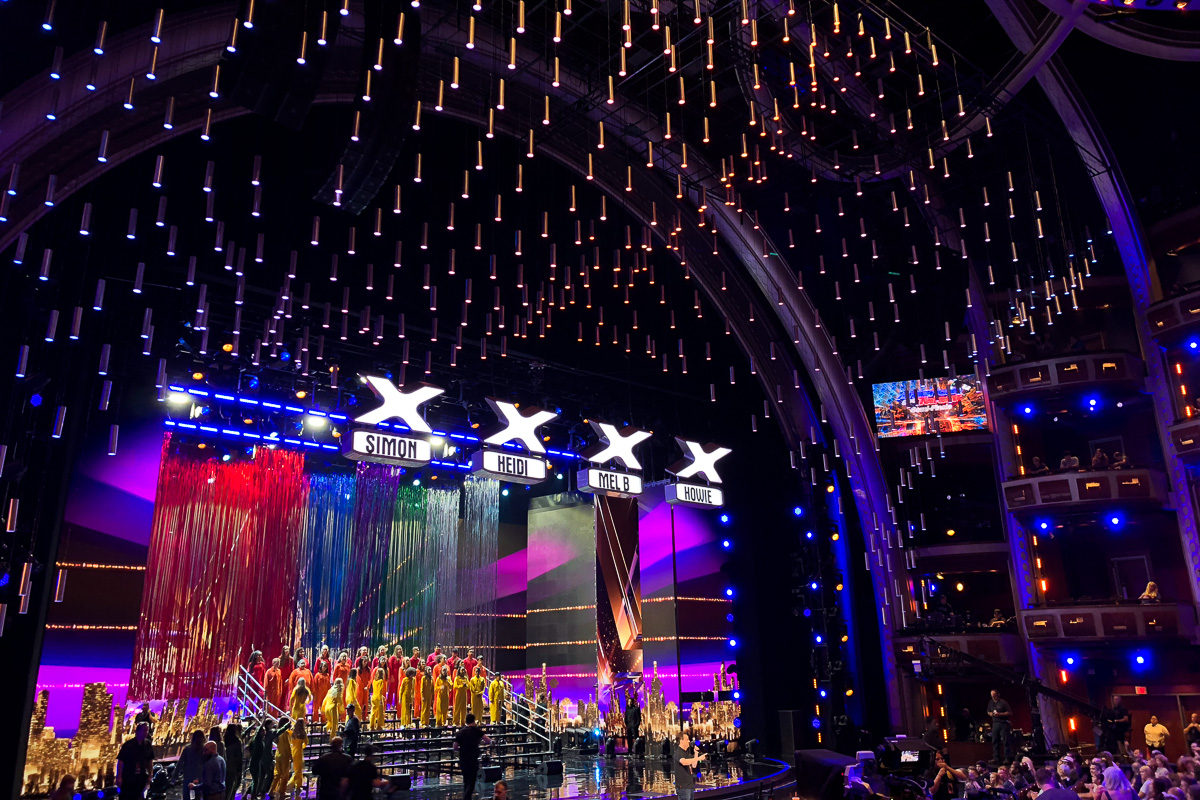 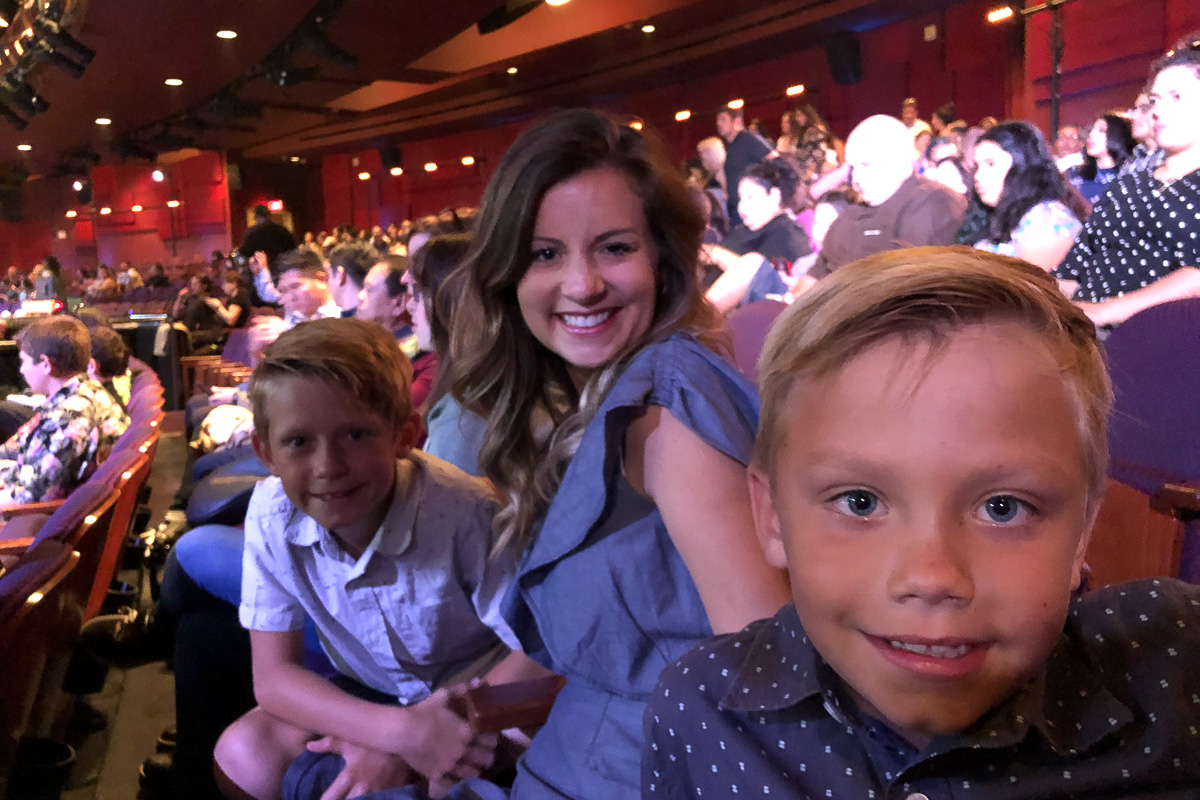 My parents stayed in town an extra day so they could come along with us. It was a lifetime highlight for all of us to be in the Dolby Theater, watching our favorite acts perform live. 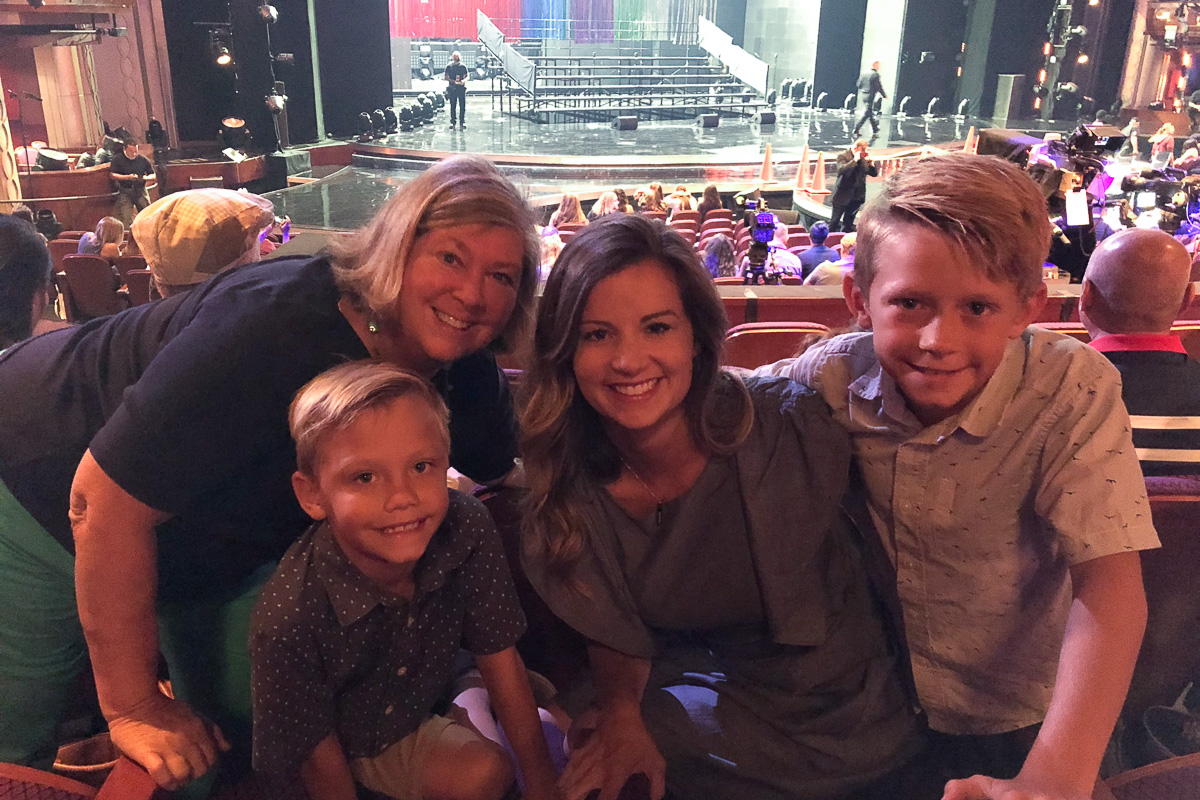 Our favorite performers were Shim Lim (a magician who went on to win the season) and Zurcaroh (an acrobatic show group). Zurcaroh’s stunning performance was so mesmerizing to watch, I had chills running up and down my entire body.

Basically, nothing comes close to comparing to the kind of show this group puts on—the shapes, the complexity, and the detail in every aspect of the performance is mind-blowing.

After experiencing a live show in the Dolby Theater, we were hooked. When the opportunity came around for us to attend a recording of AGT: The Champions in October, we couldn’t pass it up. The spin-off show was pre-recorded to air the following January, and included winners and finalists from past seasons. We headed back to the Pasadena Civic Auditorium for another round of performances. 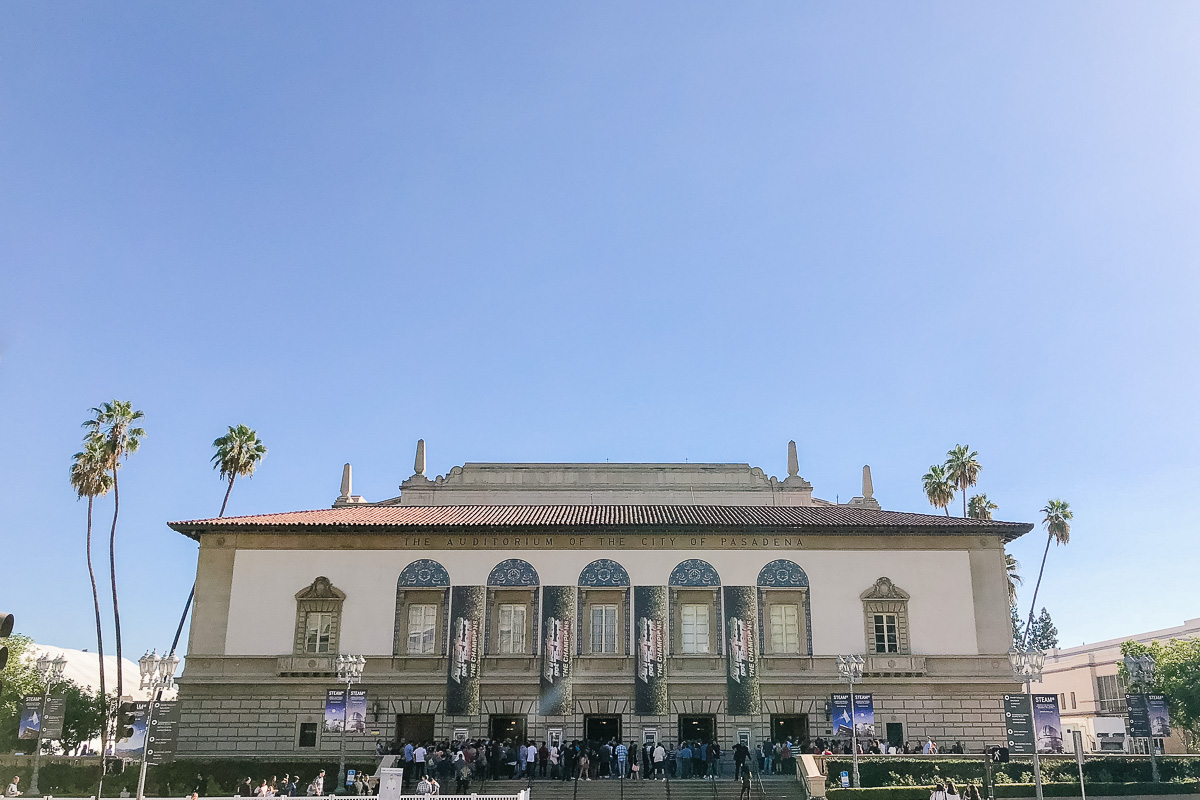 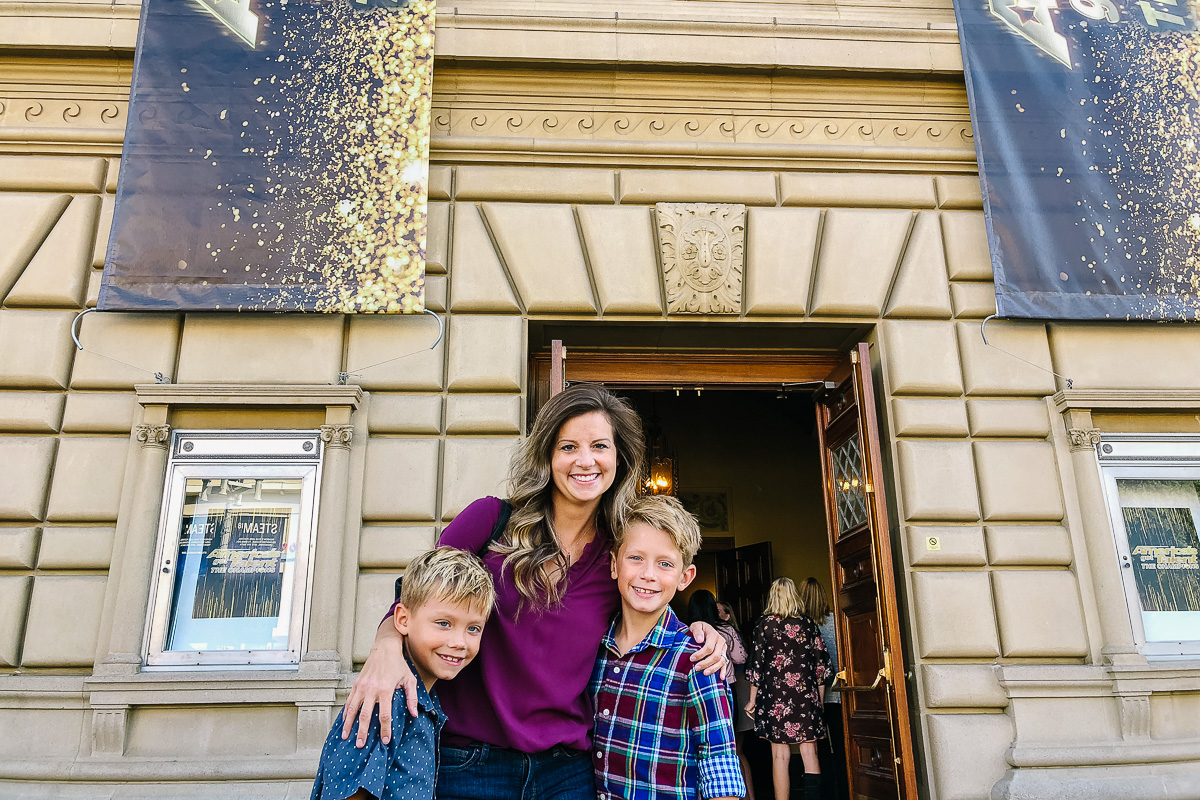 We came full circle as we entered the theater where it all started back in March. We saw more amazing performances and closed out the 2018 America’s Got Talent season on a high as we recounted all of our memories and favorite acts we invested in over the course of seven months. 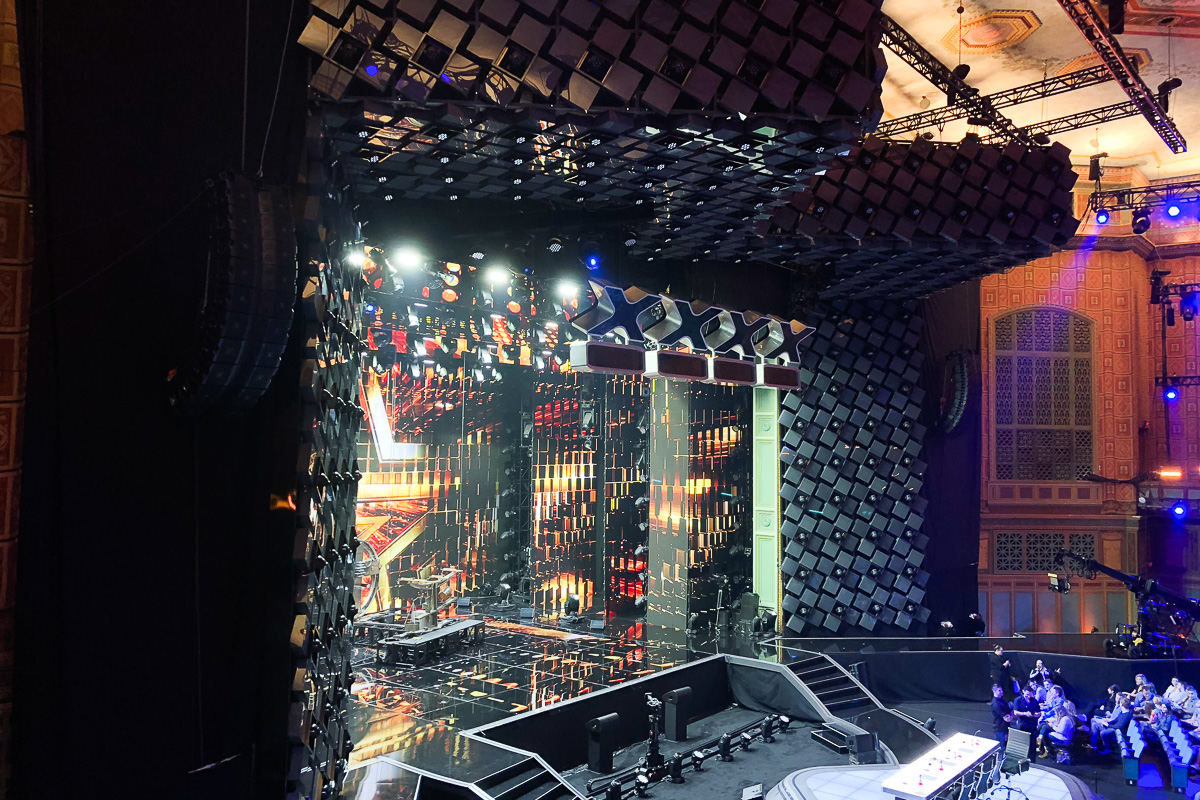 America’s Got Talent provided us a lot of anticipation, excitement and togetherness and the 2018 season will always hold a special place in our hearts.